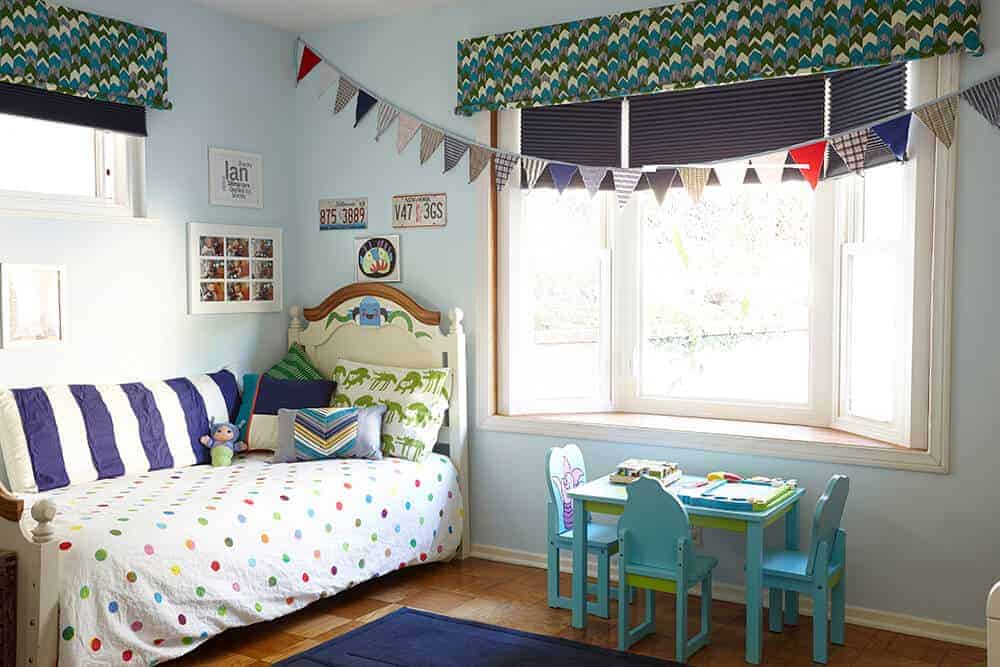 Welcome to  second (mini) makeover post for this very lovely family. When we arrived at the house to do the bedroom makeover we decided that one room wasn’t quite enough and Decorview offered to do the windows of a second room, their oldest son Ian who is special needs and could probably appreciate a surprise or two:). So we decided to throw in Ian’s room as a bonus – just some awesome window treatments and some simple styling. And since I didn’t actually have to source the window treatments or install them, I really just had to buy some fun pillows and make the bed. Easy, peezy.

Here’s how it looked before, below. It was a pretty darn cute bedroom I have to say. Sure the window treatments could use some love, but otherwise Emily (the mom … I’m not writing in the third person) had done a great job decorating it.

But there were some window treatment problems. The problem with curtains on a bay window especially in this room is that they become totally in the way and look really messy. I’ve seen it work, but its not working here.

1. Window treatments that look better. Duh. Style is important to me.

2. Window treatments that block out the light so Ian can sleep in as long as possible. Sleep is important to the parents.

3. Window treatments that are child proof and yet accessible  – that transom is high up so you would have to stand on the bed to control any shade. Accessibility to parents (but not necessarily Ian) is key. 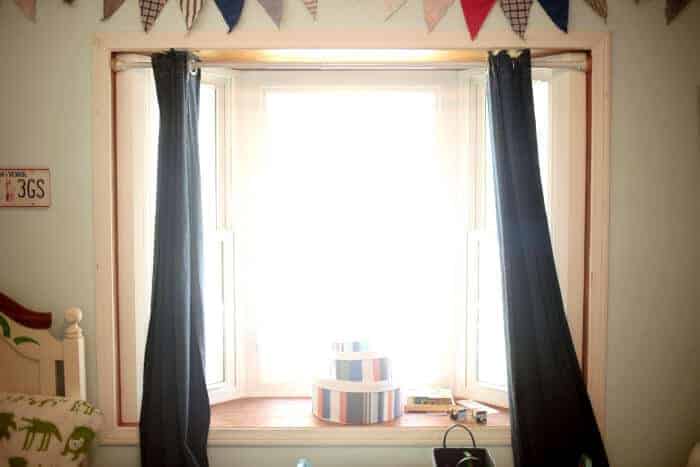 We had the bay window in this room and the transom on the other side. Another case of the ‘two different windows in one room’ situation. In this case we chose to do the same style and shade on both. 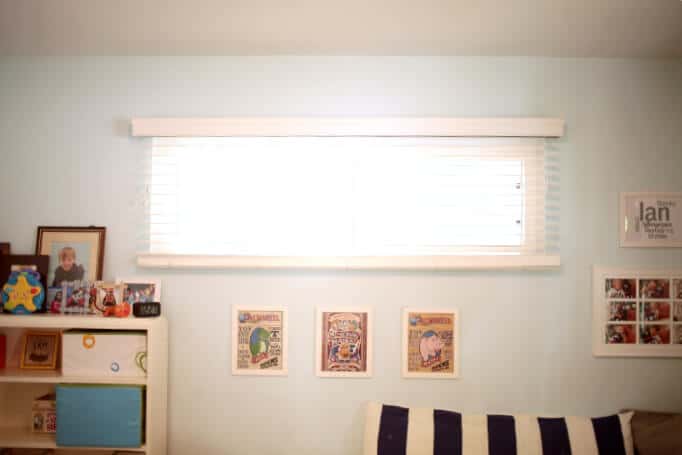 Our Decorview window designer, Alla, came and measured the heck out of those windows and had really good suggestions to solve all the functional problems. She even brought this adorable fabric swatch amongst her 30 books of fabrics and I was shocked that I found a pattern that I liked. 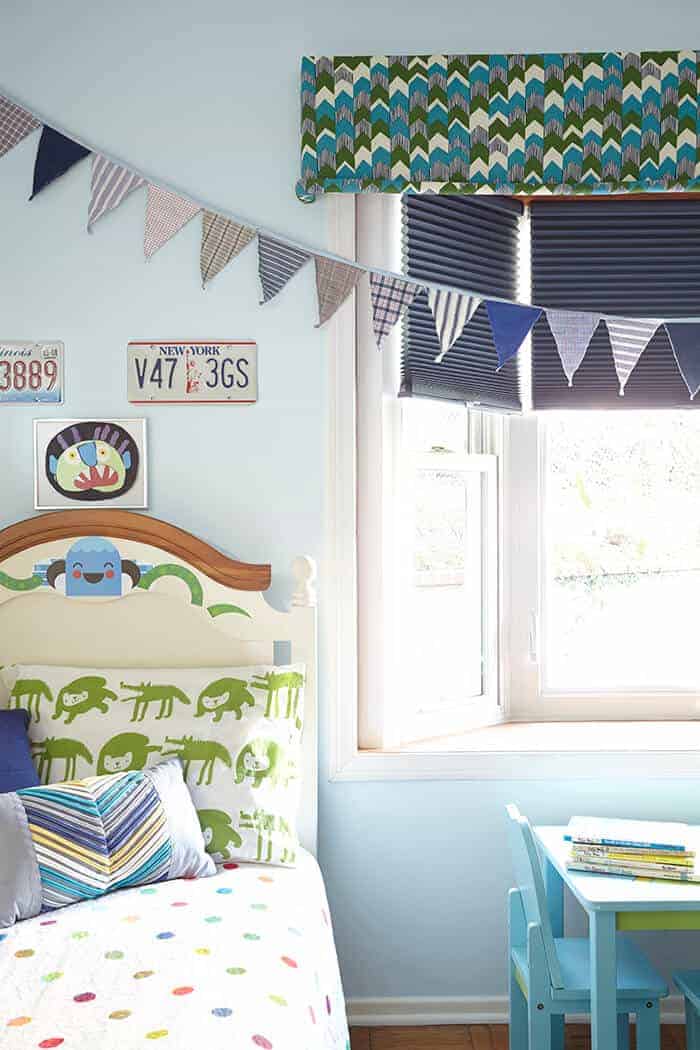 I’m picky when it comes to patterns and in general I like vintage, custom or just really expensive patterns so at first I said just a solid but then she showed me that adorable geometric pattern that was already in the color way of the room and we bit hard on that. The cornice box makes it look so finished and intentional, then underneath we have these accordian style black out shades that pull up and down super easily.

Sometimes this style can feel too contemporary for me (probably because I just love roman shades so much), but the function of it in this space convinced me. We couldn’t fit any fabric romans because the windows are too small and there would have been huge gaps in between them (even bigger than the ones here which look way less dramatic in person) or order to fit the actual top of the shade. Plus these are black out, and slim. 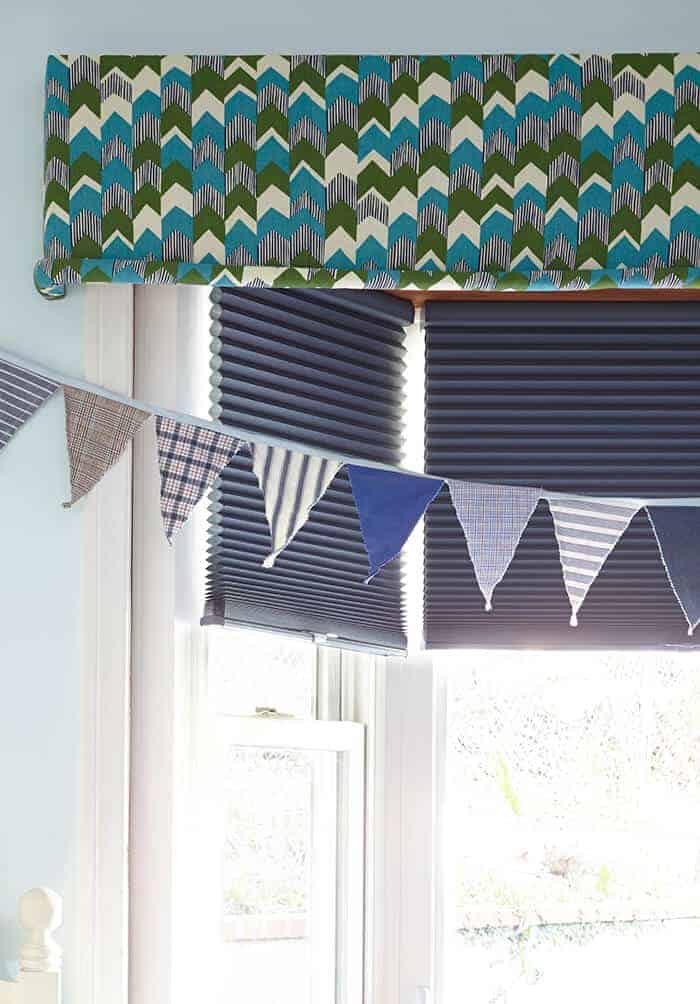 Over the transom we did the same thing … well, kinda. Alla suggested the Duette Architella, in the Smoke Blue color way with, check this out, remote control power rise function.  And if the remote control part turns you off, which it does me because I will lose that sucker in approximately 15 seconds, you can have a switch installed easily on the wall and control it from there. I now need everything motorized because it is EXTREMELY fun and you feel instantly very rich. Next week i’ll show you Joanna’s apartment that has motorized rolling shades that are awesome, too. 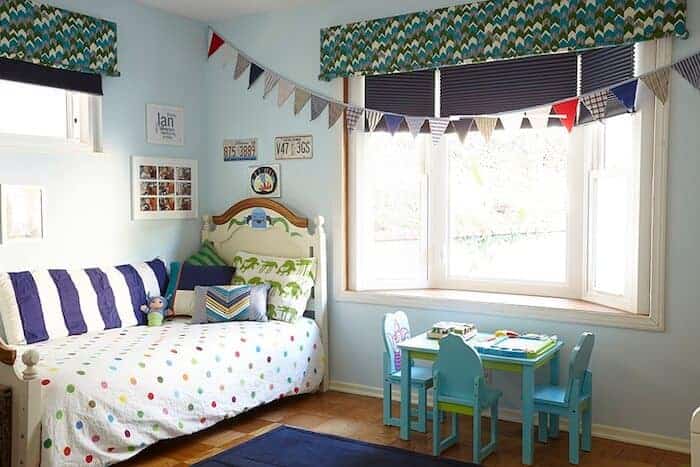 We tricked out the room with new bedding from Ikea, some Target pillows and rearranged the room a bit, cleaned it up and just made it generally more adorable. Ian LOVED it and gave me a big sign language ‘thank you’.

Naturally with any makeover seeing it in action is way more satisfying, so here is a video we made with SharkPig which I LOVE. It shows the makeover, the product and the whole process.

Watch and share, folks. Then go get your window treatment on.

Thanks for all your comments yesterday – they made everyone feel REALLY good. In case you are ever like, ‘Oh, I wonder if I should comment because she probably doesn’t read them’ know that unless it’s an insane day and i’m not in the office at all, I read every single comment and really, really appreciate them.  So, thank you. xx

This post was brought to you in partnership with Decorview.

All after photos by Zeke Ruelas.