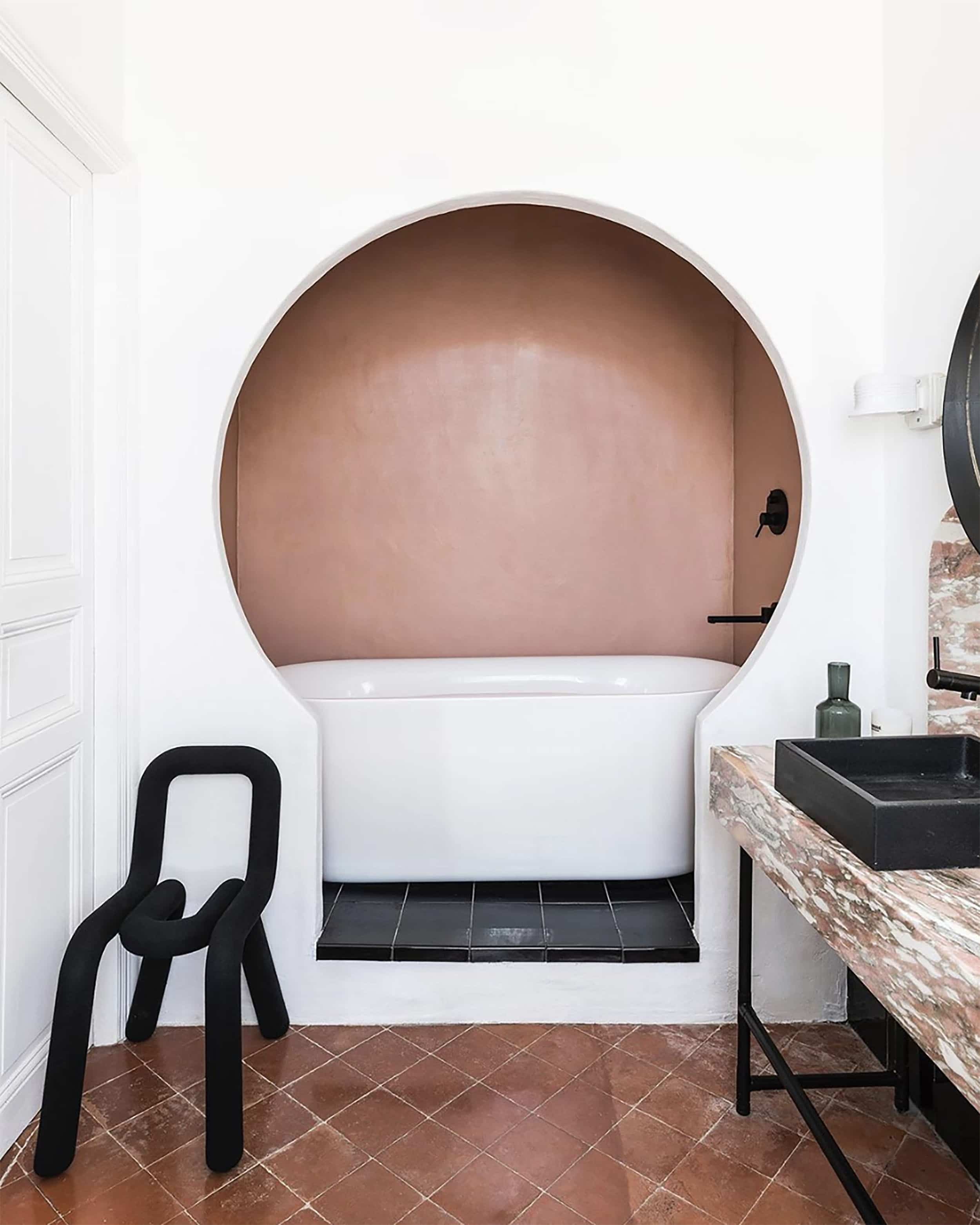 We’re back with another blog snack, as reader MM said in yesterday’s second-day post. We’ll henceforth call this our “afternoon snack” because who doesn’t get a little munchy for a lil’ sumptin’ at around this time, hm? Dig in!

If there is one architectural element that has taken over the design world, it’s the arch—rounded doors, hallways, headboards, niches, you name it, it probably has an arch on it. It’s the new “put a bird on it.” To call it a trend would negate its classic and timeless nature; it’s just a rounded edge rectangle or square, that’s all. I am in no way sick of it, it’s not going anywhere hopefully soon, as our move toward round anything is long overdue. A typical house is full of straight hard lines—if you are lucky, floors, walls and ceilings that meet at 90 degrees, so a soft round shape certainly breaks it up in perfect quiet contrast. Plus, let’s be honest, walking through an arched doorway is more fun. It just is. Bathing in an arched bathtub nook feels magical. We are all about the arch.

So in the office, we were thinking…what are the new interpretations of the arch going to be? Anything? Are our two choices squared-off corners or rounded ones? Well, we started seeing this pop up…

First off, “technically” the shape in the stunning bathroom above (designed by Pablo Chappelli) is a rounded horseshoe arch but the two terms are used pretty interchangeably. But to show you the difference, the killer marble backsplash (pictured below) from designer Beata Heuman leans more toward the traditional keyhole shape but, like most anything cool, is a very modern take.

Now I’m not saying that this will be as ubiquitous as the arch, it won’t nor should it. It’s more specific and while it is a traditional Moroccan architectural feature, I feel it could easily go in a contemporary home. I don’t think it should necessarily take the place of an arched doorway in a colonial home (not that arches are a thing in colonial homes anyway).

I love it for niches or entries into modern spaces. I could absolutely see it taking off in the boutique hotel world. The Menorca Experimental (below) has clearly shown it’s modern power. Also, Chzon (the design firm) makes design magic with everything they touch. If you don’t know them, change that immediately.

When I was scrolling through #keyholearch on Instagram for research, I saw that architect Assembly a.b. installed one in a modern home in North Carolina and man did it turn out so cool. The “after” photos on their site didn’t have a straight-on shot of it so first is a photo of the construction process then below the finished result featuring all the natural light I want in my life at all times.

I think we all can agree this house is incredible.

In conclusion, I love the keyhole arch and think we will be seeing it more. Just wait and see. I mean it’s easy for your eye to understand it, and just soooo playful and whimsical. I’m not alone in my love over here at EHD. Jess is considering using it for her bed nook, which I think is the perfect place because it’s super cozy and you don’t need the wider access/entry. DO IT JESS and then show us how.

Thoughts? Are you into it? Let’s discuss.

In case you are still “hungry” and missed Sara’s morning post head on over. You won’t be left wanting:)

These are delightful in mansions and architectural wonders. Victorians. Adobes. A quirky shingled cottage. Do not attempt in your standard suburban home unless you never plan to sell it. 🙂

When we remodeled our townhouse, we “arched” both doors into the kitchen, the doorway between the entrance hallway and the dining area, the door into my shower/toilet room, the area around my bathroom vanity, and the doorway between the short hall along my bathroom area into my bedroom. Everybody who sees them LOVES them. And it really goes a looooooooong way to making a cookie cutter space more individualized.

As for the Moroccan keyhole arch, you should check out Bill Willis’s designs for YSL’s house in Morocco.

That YSL house is so killer. Every time I see it, it takes my breath away (and the gardens are even more insane).

Wow, wow, I am beyond excited at the second bite of the cherry, ……..afternoon snack.
Love that 1st photo of the arch above the bed!
Thanks!

Interestingly, there is a lot of precedent for this in Chinese / Asian architecture. I wouldn’t have even thought to call this a keyhole arch. I would have called it a moon gate which is what you often see in Chinese garden walls (take a google gander – although now I’m realizing not all moon gates have the flat sides like the keyhole).

Or a flying arch?
https://brassbedofva.com/shop/iron-beds/flying-arch-canopy-bed

No, except in those rare cases where they suit the architecture. Note emphasis on RARE.

Please check this rug and comment your suggestion where to place it.

I love these afternoon snack posts! Missing it today.

That bathroom is stunning!