Here’s the deal, folks: there are one million lists of “What to watch while you are expecting” or “Best movies to watch while pregnant” and they just aren’t what I want to watch. They include “Rosemary’s Baby, ” “Juno, ” and “Baby Mama.” All fine movies, whatever, but the best part about being pregnant is not being pregnant or the birth or even having a baby … it’s HAVING A FAMILY.  I’m sitting here feeling bloated and bored and just staring at my pale belly waiting for him to grow into a human, feeling like it’s taking forever, and yes, kinda bored. Obviously I’m VERY excited but there are some times, in between ultrasounds especially, when I would love to watch a movie about how totally incredible having kids and having a family is going to be. I don’t want to watch some other pregnant chick that is as annoying to me as I am to myself.

But as I was looking for lists of such movies all I could seem to find were movies about pregnancy or about the first year or about how hard marriage is when kids get involved, YADDA YADDA. I KNOW THE BAD STUFF IS OUT THERE. I’m a total realist, so I’d love to be reminded of the hyper-fantasy of family, love, intimacy, KIDS, long-term marriage — and NOT just Katheryn Hegl and Seth Rogan having a totally unrealistic and dysfunctional relationship. (I don’t watch Knocked up and think, “Oh, yeah, I can’t wait” …)

In fact (may I rant?), when Brian and I got pregnant the first time we decided to go and see Friends with Kids that day to celebrate. You know what you shouldn’t see when you are pregnant with your first child? FRIENDS WITH KIDS.  It’s all the bad stuff without any of the good stuff. These kids ruined most of their relationships. Marriage is hard, raising kids is hard, (I KNOW that is coming), but while I’m pregnant I would love to just to be reminded WHY I’m doing this — not to have the birth or the baby, but to have a family.

So, I decided to make a list of the movies or TV shows have actually gotten me (and Brian) excited to have kids over the years. Movies that remind me why it’s all so totally worth it. Because “Knocked Up, ” “9 months, ” and “What to Expect …” aren’t doing it for me.  I’m a sentimentalist. I respond to admirable parent/child relationships, the adorableness of child imagination, the plight of the torn family getting back together, and to, yes, really really really cute kids saying really cute things. That’s what I want. Not the wife screaming at the husband that she hates him during child birth while we see her writhing in pain. Not the parents communication and sex life totally dissolving because they chose to have a family. These are realities that I’d like to face if and when they occur, NOT watch while I’m headed toward them.

This is for all the potential (as well as current) moms and dads out there. May Hollywood take a cue and maybe make some more movies that remind us why having a family is worth it. Because it is. 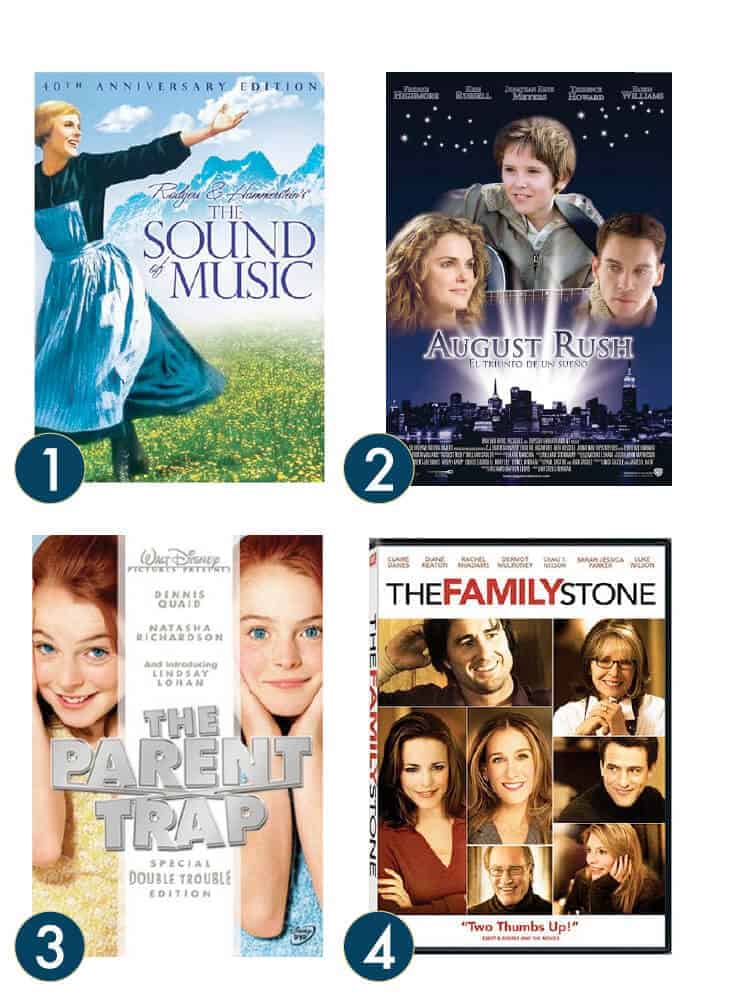 Ah, the family getting torn apart and then back together. These tug at my sentimental little heartstrings.

1.The Sound of Music.  While the amount of children is overwhelming at best, it reminds me of being a kid and and feeling safe and loved. And the way that she parents is something that I admire. Each child has a redeeming quality, the kids have fun together, and the relationship with the lovely Julie Andrews is admirable. PLUS, they sing, and music manipulates my emotions easily and makes me weepy. So there’s that.

2. August Rush. Strangely underrated. This movie ( … also with music) is totally sweet and beautiful and all about the strength of the mother/child bond. It’s really, really awesome, totally entertaining, and makes me VERY excited to have a son who loves me as much as that boy loves Keri Russell. Also, Keri Russell is in it, and that woman can emote better than virtually any other actor in the world. Watch it.

3. The Parent Trap, Lindsey Edition. Oh, Linds. She was so cute, had such talent and potential. I mean, she plays both a Brit and a Southerner. This version is totally adorable and makes me excited to have precocious girls. You fight for the family to get back together.

4. The Family Stone. NOT an amazing movie, but good enough to make it on the list because the relationships that they have with each other feel real and the acting is all great. Part of what gets me so excited about kids is the idea of partying with them when they are of age, where we can real conversations as adults, where I can see how they turned out, and where they teach me things.”Kids and parents as friends” movies always appeal to me and make me want to start earlier than I did. 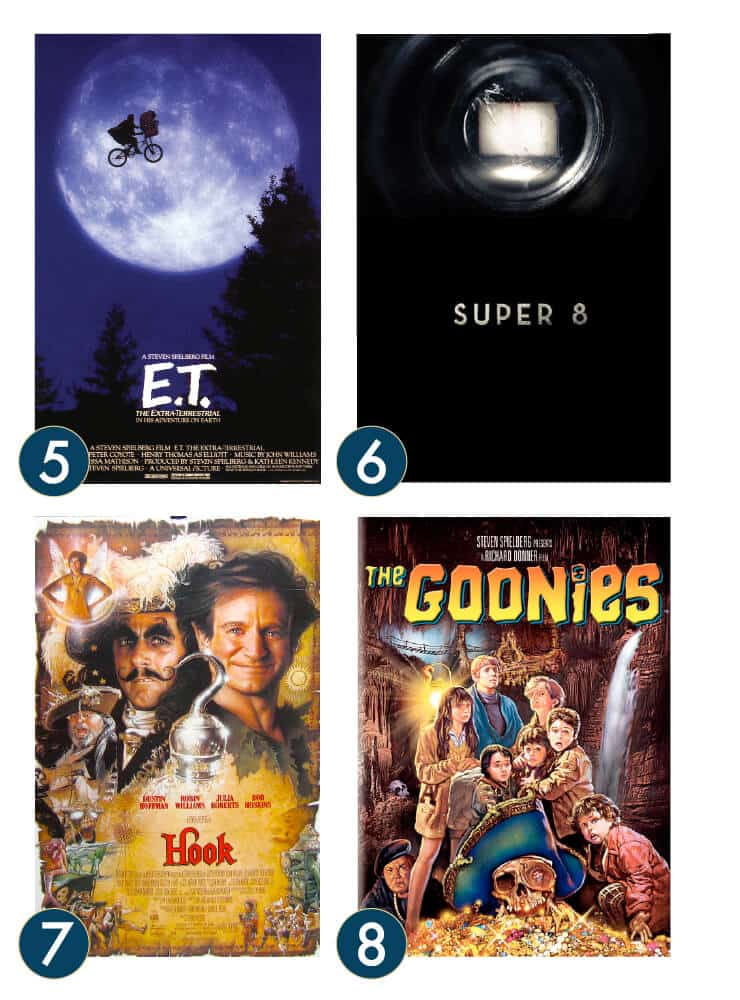 Movies about the imagination of kids. Let’s face it: kids can be kinda annoying unless you engage them and try to see their personality. What’s so great about them is their crazy weird imaginations and the things that come out their mouths because of it. I love all the kids in my life so much more when I try to understand their brains. They become so interesting and just such people. So these movies are all about kids and their imagination.

5. E.T. Yes, it doesn’t hurt that Drew Barrymore and the ET kid are totally adorable because most of you know that “cute” goes a long way with me. But it A. reminds me of being a kid and B. shows these kids in such a human, emotional, joyful, and sad light. It makes me want to have a complicated child that has something to fight for and interests of his own. It’s just so good.

7. Hook. This one is a bit of a stretch, but I still love the kids in it, the lessons learned by all, and Robin Williams is a GD comic genius.

8. Goonies. I hope my kids are as cool, smart, brave, and adventuresome as these kids. I also hope they don’t mind it when Mom comes along on said adventures. 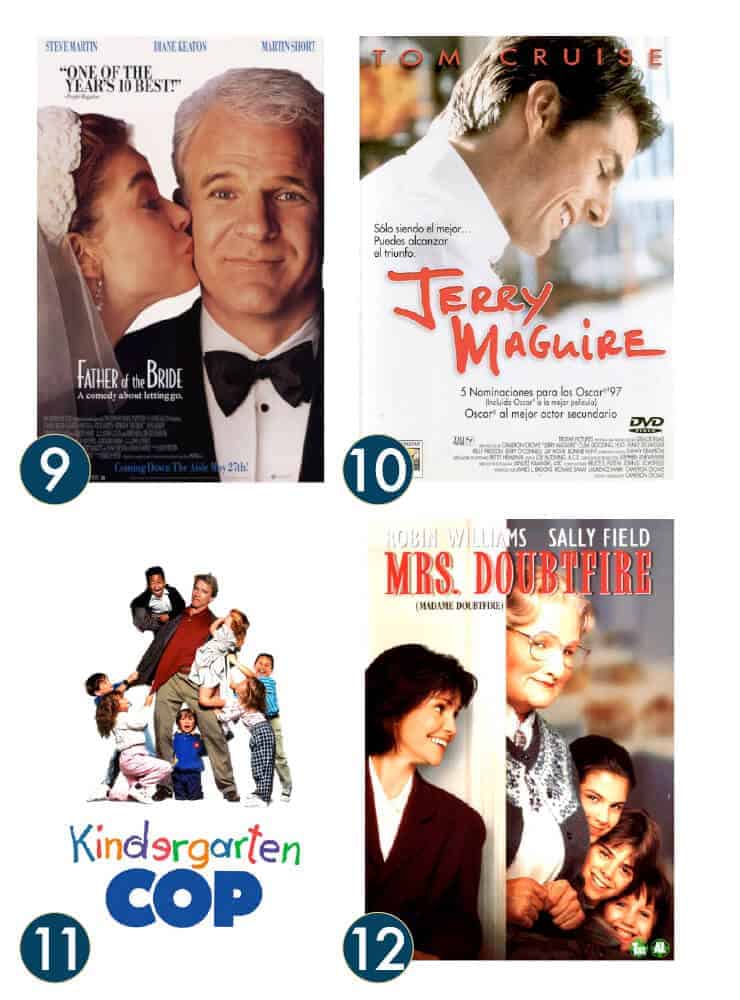 9. Father of the Bride.  The relationship between the father and daughter is enough to make any man disregard the football throwing dreams of a son and opt for a daughter.

10. Jerry MaGuire. Yes, this is mainly about the kid. We all want that kid. It’s undeniable how cute he is, how adorable his words are, how oversized his glasses are. He had me at hello. Sorry.

11. Kindergarten Cop. Cute kid, check. Hilarious Arnold lines, check. Every guy loves this movie and can actually see themselves as Arnold with these kids. Brian loves this movie very much.

12. Mrs. Doubtfire.  The way that Robin Williams’ character loves his kids is so palpable. And the way they love him back is captured so well. Plus, there is an adorable daughter with a lisp. 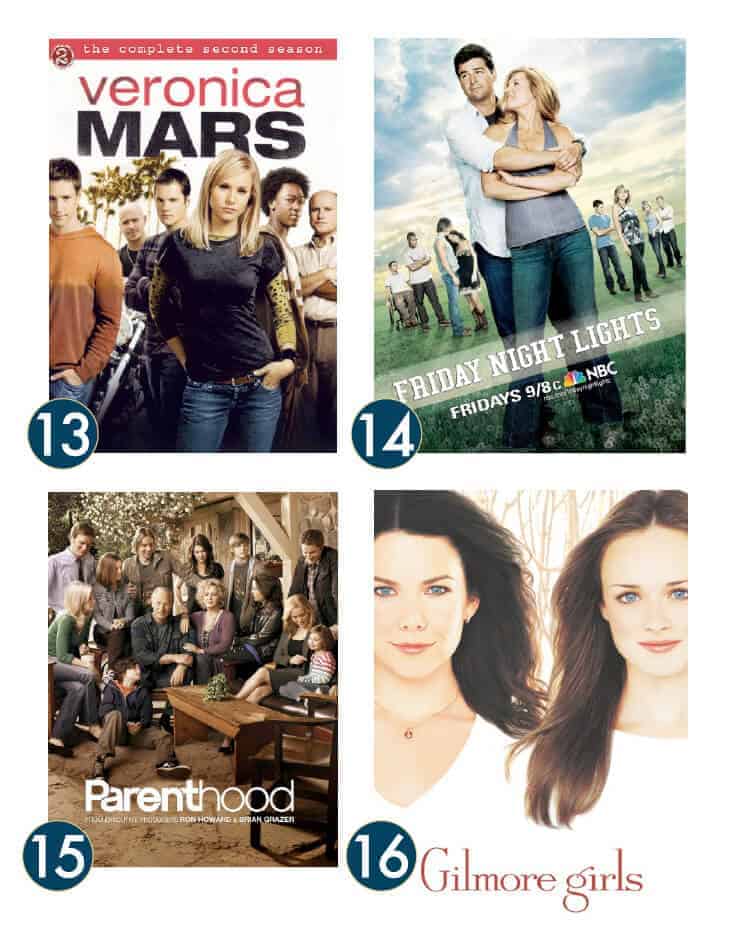 These TV shows do more for me than most of those movies combined. Let me really over-explain here …

13. Veronica Mars. Oh, that snarky teen detective show that I’m kinda obsessed with? Spend a minute with her and her father and try to not covet their relationship. It’s the fantasy father/daughter relationship full of mutual respect, wit, and total love.

14. Friday Night Lights. There is NO marriage so good on TV and NO better father in Hollywood than one Coach Taylor. Finally a couple on TV that you want to emulate. It’s healthy and strong and totally real. Let’s hear it for Tammy and the Coach.

15. Parenthood. The pilot episode made me weep (as does every episode — oh the emotional manipulation) and then decide that the family thing needs to happen sooner rather than later. It’s about one big family, all totally idiosyncratic, nuanced, and completely real. The way it’s directed makes you feel like you are in the room with them; it doesn’t feel like they are actors at all. It’s just so good.

16. Gilmore Girls. Having a baby at 16 is not ideal, having a 16 year old at 32 with a relationship like that is kinda awesome. Although they sure do like to talk a lot.

Whether you are 10 years away from having a family, expecting a baby, already have kids, have grown kids, or are just kinda thinking about it, these movies (and TV shows) will at least remind you about the good parts of having a family. It’s the good stuff, folks.

I’m sure I’m missing a lot of good family flicks here, so give your suggestions in the comments, PLEASE!!! In a couple weeks after all the comments come in, I’ll update the list … if I agree (“Friends with Kids” is NOT going on that list).

(P.S. Thank you Andrea for helping me brainstorm 🙂 and Alison for putting together the post).

256 Comments
Oldest
Newest Most Voted
Inline Feedbacks
View all comments
Our sites use cookies to improve your experience. Learn more