It’s a bright, airy, romantic, feminine, unexpected and yet totally calm bedroom.  Welcome to one of my favorites rooms i’ve ever designed.  It was for Secrets from a Stylist, but i never had the chance to shoot it properly.  Well, luckily i met Bethany Nauert and last week we stopped by the house and shot the hell out of this bedroom.

I really want this room.  The canopy bed, the regency dresser, that orange chandelier – AND I DON’T LIKE ORANGE.  But i love these colors together.

So here’s the story:  The homeowner is still one of my favorites ever because she was just so grateful, happy, easy and funny.  I actually redid her backyard for this backyard makeover video that i blogged about because she was just so lovely to deal with.  She has a really adorable mid-century house in the hills that has so much charm and light so its easy to make-over, plus she doesn’t live far away which makes it easy and she has great style. 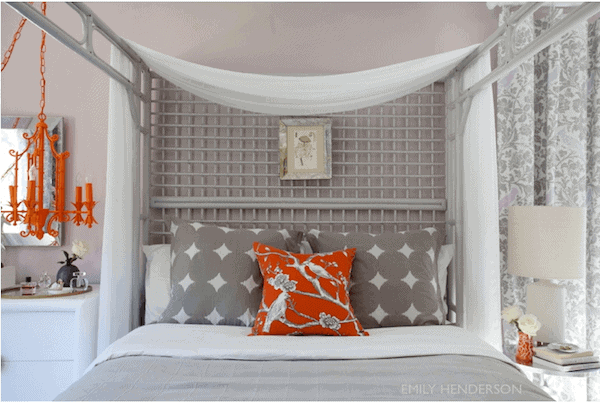 Her style was ‘Eclectic Modern Romance’ (i think) and she wanted something soft and pretty, but feminine without being too girly, which is pretty much my fantasy.

The color palette was definitely a risk, but once i saw this photo below i knew i wanted to try it. 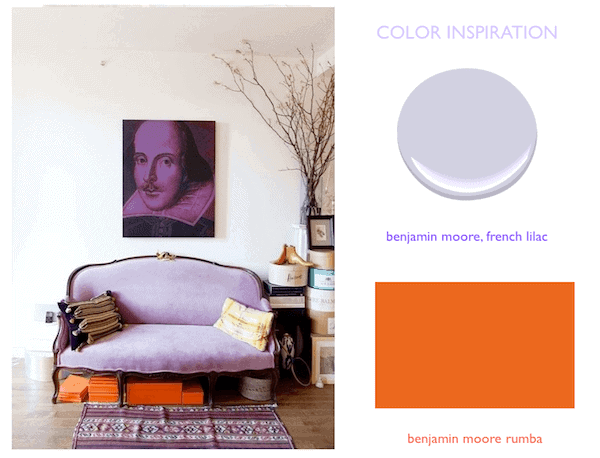 That Hermes orange is really captivating, partly because it is so classic/iconic and partly because it is just so bold. But i went a little grayer and warmer with the lavender, since it was on all the walls instead of just an awesome settee, and i brought in more gray accents to counteract the femininity.  I honestly can’t remember what color I painted the walls, i do apologize, but i think that this ‘French lilac’, by Benjamin moore is pretty close to the wall color and ‘Rumba’ by Benjamin Moore is a pretty close ‘Hermes’ orange. 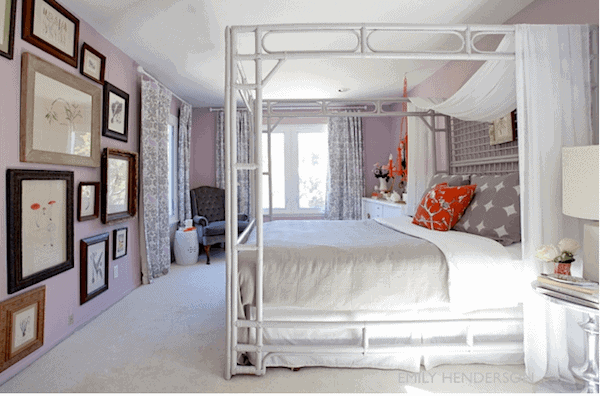 I knew i wanted a statement bed, but in a quiet way, so one day when i was shopping at the antique mall i found this crazy bamboo canopy bed that was stacked on top of itself, totally taken apart and discarded. The guys told me it had been there for years.  ‘IMPOSSIBLE’, i thought, but then again my eye hones in on shit that other eyes just don’t.  Years as a child at the dump can do that to you.  I think it was $150 and i about peed in my culottes.  Sure, getting it painted the perfect matte gray was going to be $300 but that is $450 for a total statement piece and 100% worth it.  If it were at a beach house i probably would have left it the natural bamboo, but on this carpet I knew that it wouldn’t look that good, and that painted this soft gray color its so much quieter. 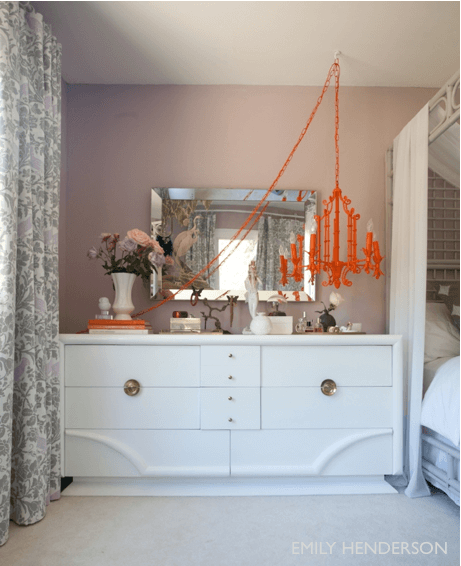 The dresser i bought from Wertz brothers as well for $150 but the finish was in really bad shape, while the shape and lines were perfect – nothing that a $300 lacquer job can’t fix.  And yes, in general anything cost $300 to lacquer. Some might be more and some barely less, but in general it’s expensive to have something painted properly. 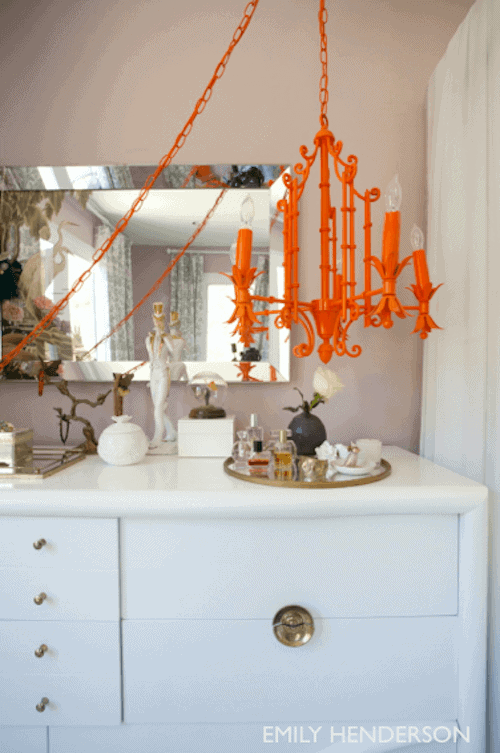 The chandelier was purchased (again) at a vintage store and spray-painted orange. The color was a readymade spray paint color from Home Depot, but sadly i don’t remember the brand or color. We painted the chain as well to make it more sculptural. I like a swag, i do.  Especially for chandeliers that are kinda statements.  It’s so much less committal and therefore it takes a serious chandelier and gives it a bohemian vibe. 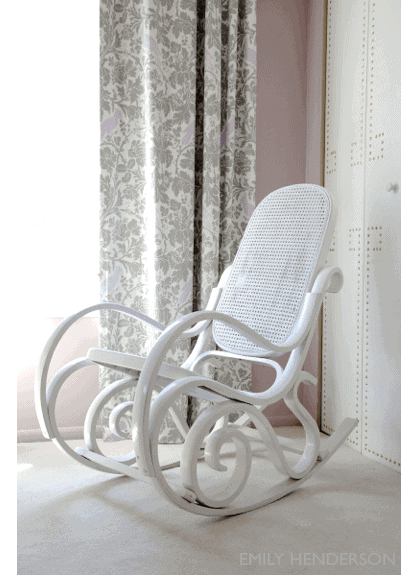 And this rocker? Yep, i bought it and had it painted. Although i had it painted by a guy that basically just spray paints things so no, i realized afterwards it wasn’t the best job. If it were a chair that got a ton of use then it wouldn’t have been acceptable, but it looks good as is and was like $50 to get painted and we were out of money. If you ever go to Pepe’s on Sunset know that if he offers to ‘lacquer’ something, it just means spray painting it.  It’s a running joke amongst Orlando and I. It’s not that spray painting is bad, because its not – its a great finish for many pieces, but for major pieces of furniture spray paint is temporary and doesn’t wipe up or hold up well, so lacquering (which takes coats of a certain kind of super durable paint, with sanding in between coats and at least 2-3 days with the drying time) is much higher quality.

That beautiful throw pillow is DwellStudio for $88.  The two behind it i thought were Dwell, but i’m not finding them now on their site, now. 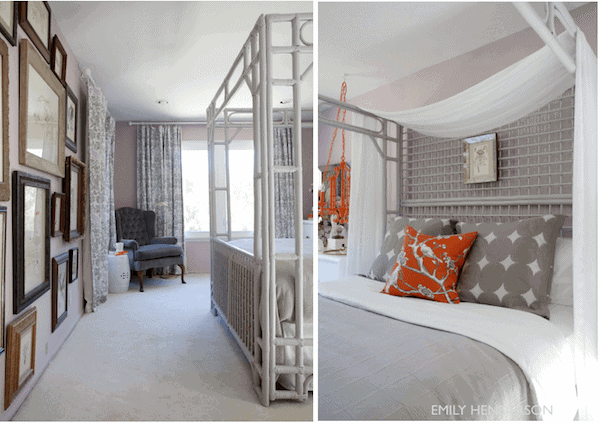 I do however, like this pillow if you wanted some that were similar and looks just as good, if not better, with that adorable persimmon bird pillow.

And lastly on the wall opposite the bed, i did a gallery wall of beautiful antique botanicals. 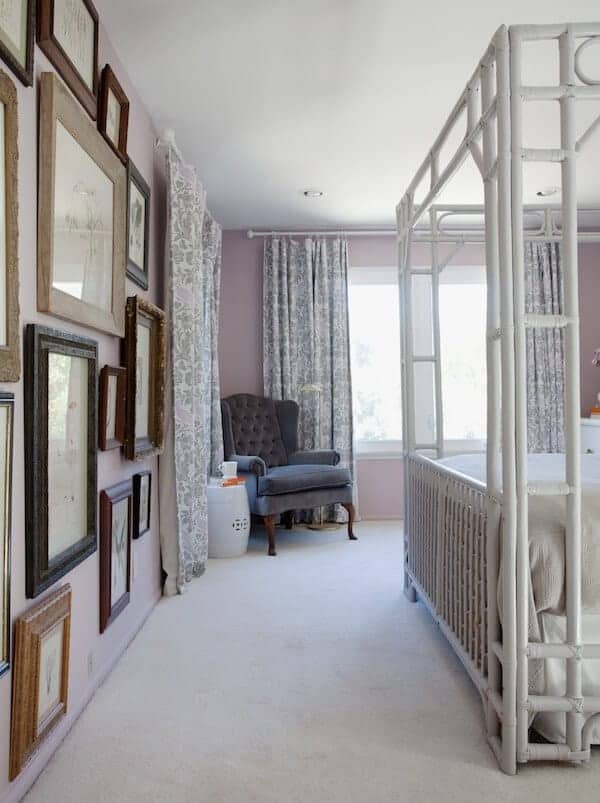 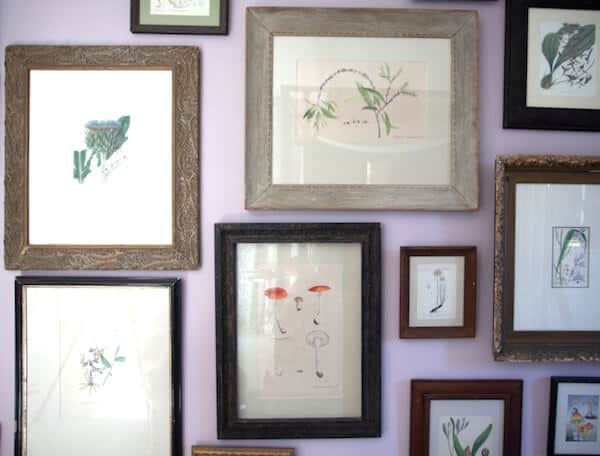 I bought them all at the same vendor at the rose bowl, but you can buy them a ton of places online.  I think i spent 2 hours and $500 at that booth, picking the perfect orange mushrooms and eggplant….eggplants.  I mixed high and low – some were originals and strangely expensive (like $80) and some were reprints, yet still old, and were cheaper $5-$7. 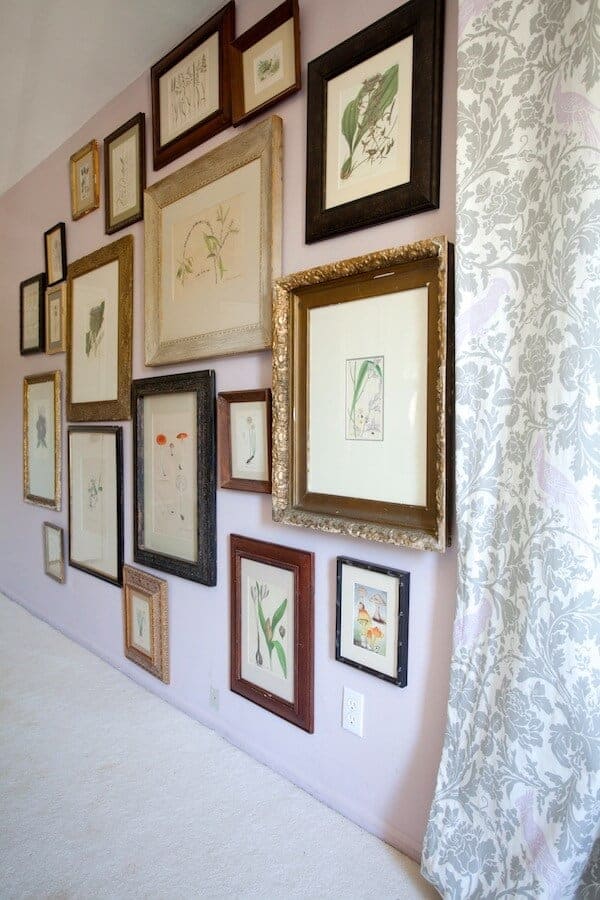 We framed them in a mix of vintage frames that we collected at thrift stores and flea markets and then we dropped of some to have framed at a fairly cheap framer in Los Feliz.  But the wall as a whole was probably around $1500.  Not cheap, i know, but is so beautiful. Laying in that bed and waking up to these beautiful drawings of nature is so peaceful.  We wanted it to look really collected and authentic. The room was really quiet so of course i didn’t want a ton of orange frames, but i didn’t want it to feel new and shiny and modern – i wanted them to look as authentic as they were and sometimes these botanicals can look really cheesy in bad frames so we had to be careful to make them look authentic and not look like hotel art.  They turned out totally beautiful.

And after visiting this room again last week, its truly one of those spaces that is so light filled and happy that you could just hang out all day in there.

Bethany Nauert photographed this room so beautifully, so many, many thanks to her.

And in case you want your own fantasy bedroom, don’t forget to enter the Leggett & Platt Pinterest challenge to win a free tufted headboard, adjustable base and $1500 in cash to get your own makeover.  Details HERE.  And remember, i’m judging (with a couple people from the company). It’s not a random contest, the more you pin and curate the better chances you’ll win-  which to me makes it actually attainable, not just luck.