Here’s the chair when my friend James bought it:

James, my friend and pseudo client in this case, found this chair on Craigslist after hours and hours of shopping. He had a vision about the perfect chair and he was going to find it. It needed to be big and substantial but not boxy. Comfortable but not over-sized. And of course, interesting and not just something you could pick up anywhere. Nice job, James. You done found it for $180. It was in bad shape though with some rips and some odor so it needed to be redone.

Upholstering a vintage vinyl chair (or vinyl anything) can be tricky. I used to think, Oh hey I can upholster anything in anything until I got 20 pieces done for my first OKL sale and two of them were screwed up because I chose the wrong fabric that simply didn’t work with the shape and style of the piece. When I say “didn’t work” I don’t mean that it was a weird choice, I mean that there were literally big gaps and puckering where there shouldn’t have been. I wanted to blame my upholsterer, but those two pieces had one thing in common: they started in vinyl and I put them in a softer, thinner, and less structured linen. Linen or any natural fiber has a lot of stretch, while vinyl or leather really doesn’t. I’m not saying it can’t be done, it’s just tricky so make sure to ask your dude. It just doesn’t always work.

In this case we really wanted vinyl or leather. It fit the retro style of the chair. We liked the texture of the vinyl in the living room, as opposed to a linen or velvet.  It felt more masculine and sleek, which is what we were kinda going for.

The first question was leather or vinyl? The labor was the same price ($320), but the price of the material was pretty different. The vinyls were about $18 a yard and we needed six yards … so around $115. But a large piece of leather big enough to do the chair and ottoman became very expensive, like around $400 – $500. The chair itself was $180, so all of a sudden that chair is around $1, 000 which was NOT the intent. We chose vinyl. 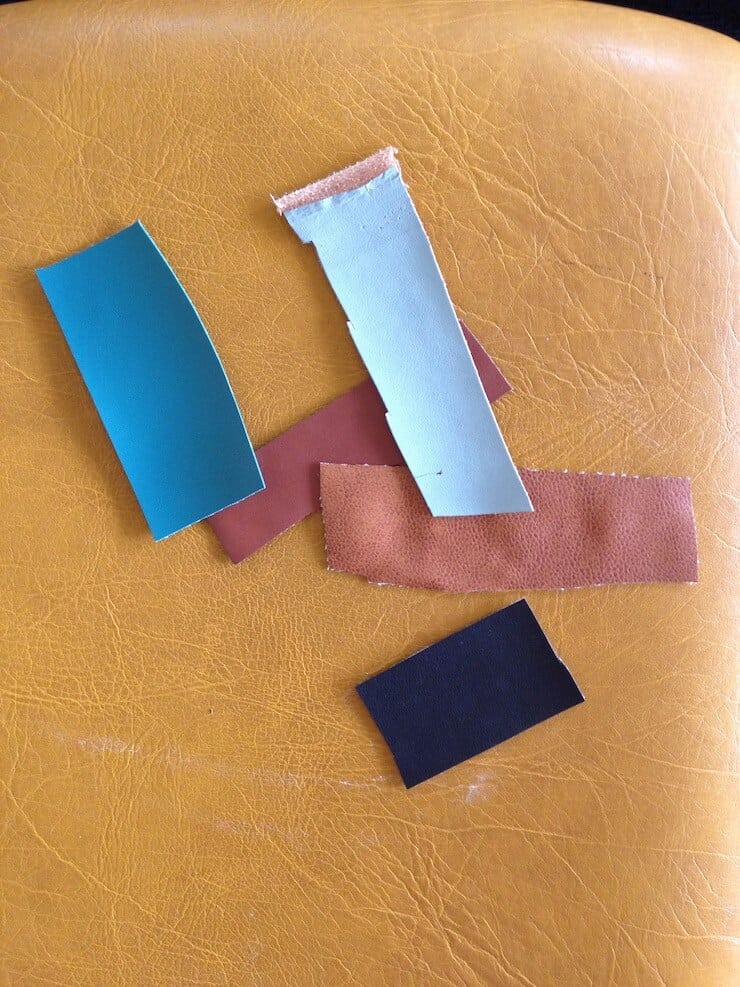 The next question was what color? There weren’t a ton of vinyl colors that I was psyched about and of course we had only one day to shop and decide (because we had to shoot the place a few days later, which you’ll see on Monday). So while there might be a ton of really awesome vinyl choices out there, there were very few that I wanted to use. I mean, it’s vinyl. It’s like trying to find the best faux fur — it exists, but it’s hard to find. That’s why the trick is to find vinyl that isn’t trying to look like leather. Because you aren’t fooling ANYONE. 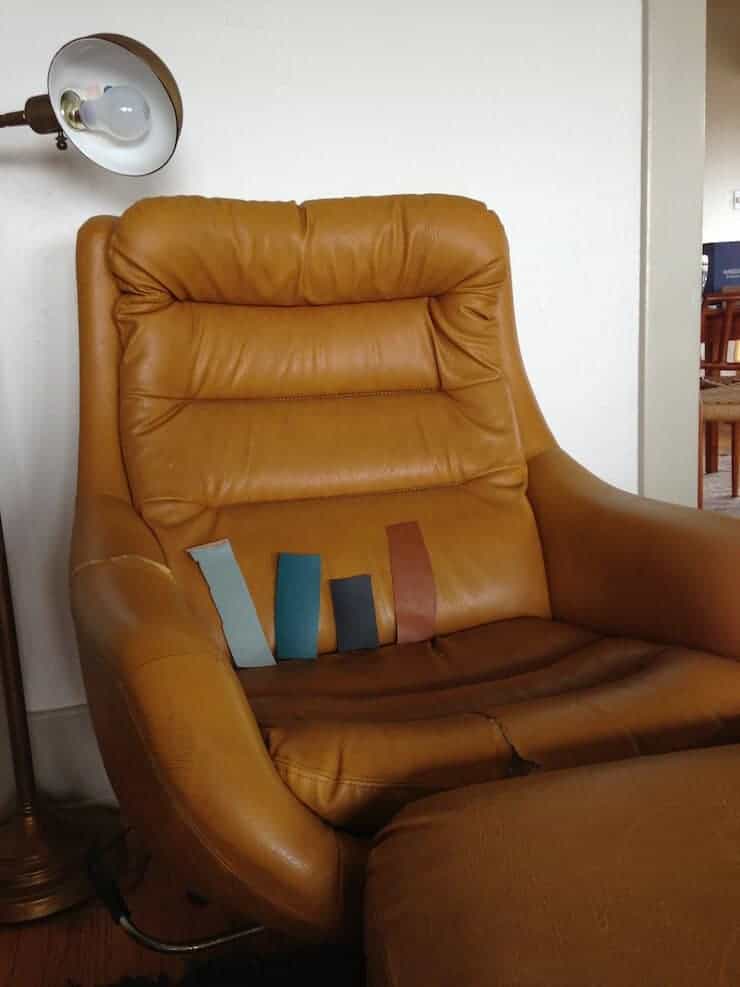 We narrowed it down to these four — a light gray, teal, black, or camel. The camel would have been awesome in leather, but it just looked like it was cheap vinyl trying to be leather, so it cheapened the chair. The black was going to be really dark with the rug. The light gray was a good choice but we just needed more color than that in the room.

So teal it was. You don’t have to twist my arm. 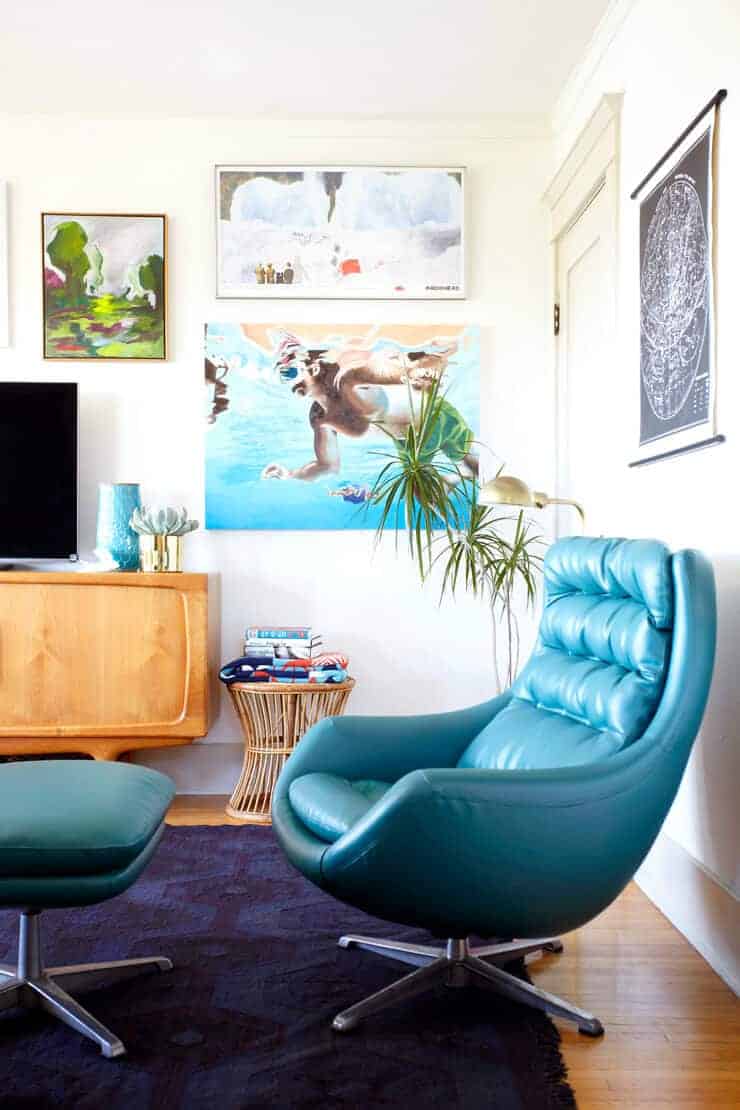 And there you go. That is a VERY good looking teal chair if you ask me. The color looks awesome and I love how it’s not trying to look like leather and obviously no animals were harmed here, friends. It’s retro and playful, but looks sophisticated and modern. Here’s a quick breakdown of the pricing: The chair was $180, vinyl was $120, and upholstering was $320 = $620. Not nothing, but it’s exactly what they wanted size wise, shape wise, and style-wise. Plus, it’s totally unique and 100 percent perfect for the room, therefore worth every penny. It required only with a one week lead time and since it’s vinyl it’s practically indestructible.

Quick resources: rug, from West Elm (and on sale right now), large incredible underwater painting by Francesca Quintano. All the rest of the resources on Monday’s big reveal post.

After photos by Zeke Ruelas. 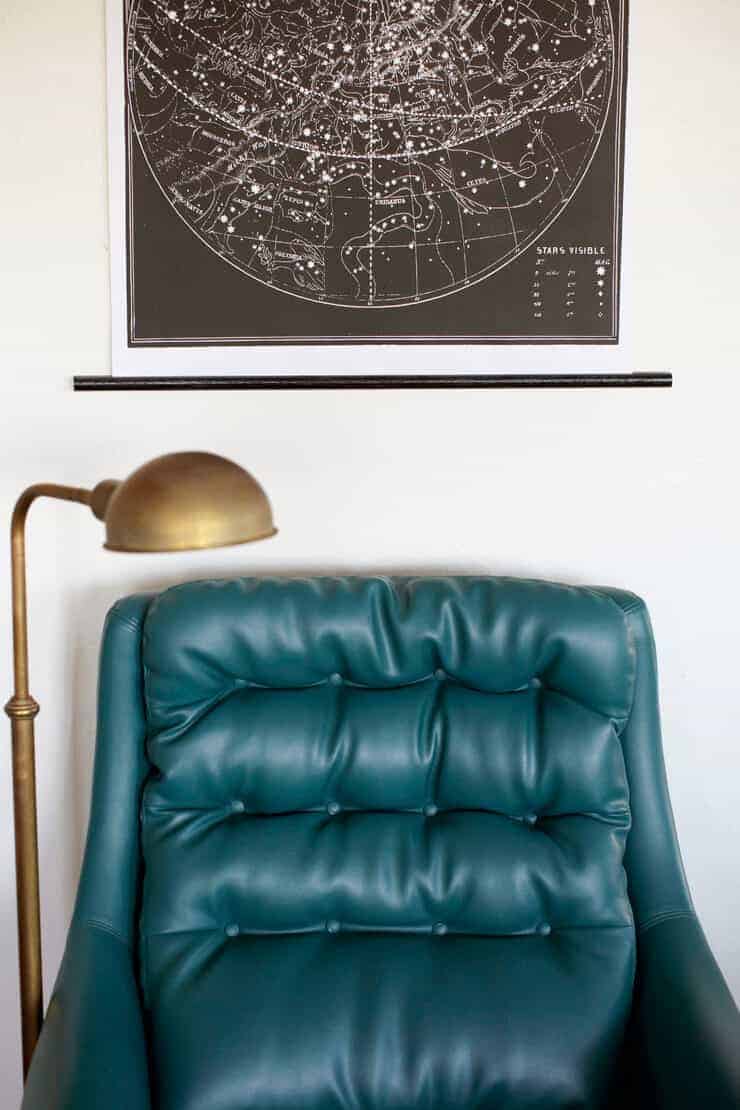 There you have it. Thanks to James for making this makeover happen by trolling Craigslist til he found his dream chair. It’s really a total stunner now. James better sit so hard in that chair. 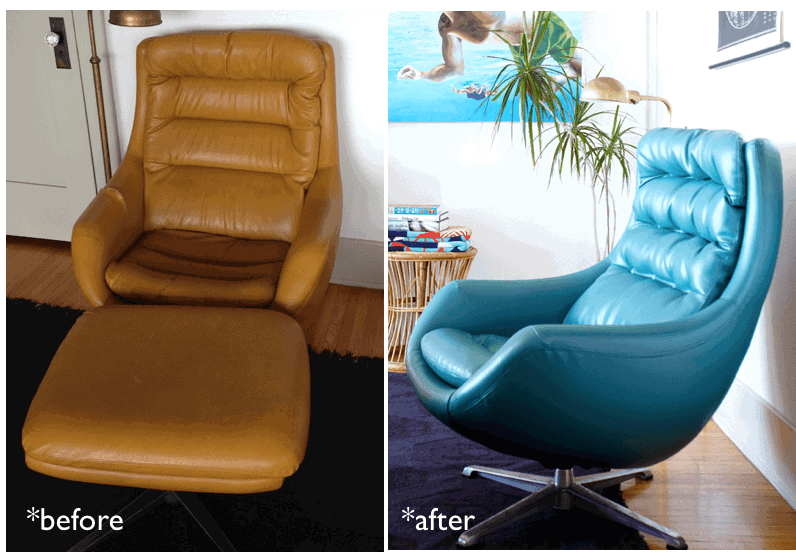 24 Comments
Oldest
Newest Most Voted
Inline Feedbacks
View all comments
Our sites use cookies to improve your experience. Learn more