I found this quiz in my inbox two days ago and life imploded in a tiny little meta poof. Its all over. Read my borderline narcissistic, over analyzation of what getting or not getting “Emily Henderson” did to my mental stability. But first take the quiz.

Lets go through my thought process when I saw this quiz:

Thought #1: #$%&*@!!! Even if it’s just this authors selection (although the PopSugar site is HUGE) and even if it’s just for this quiz, I am just so flattered to be within spitting distance from Jonathan Adler, Kelly Wearstler, the Property Brothers and Nat Berkus. And without getting all J-LAW on you and virtually tripping down my blog stairs, just know that I’m psyched to be up there. Very.

Thought #2: Well, most of these people have influenced my style greatly so even If I do get ‘me’ a lot of it is due to ‘them’, so by getting ‘me’ am I really just getting ‘them’? Its starting to get weirder. I’m uncomfortable but in the same way that I was uncomfortable before my first sloppy kiss in front of a crowd of junior high kids behind the school dance in 7th grade – embarrassed, yet excited enough to go through with it anyway.

Thought #3: What if I don’t get ‘Emily Henderson’?  There was a strong chance that I could get ‘Nate Berkus’ who I love dearly – personally and stylistically. Or ‘Jonathan Adler’  – who I used to work for and whose whimsy definitely influenced me. Or ‘Kelly Wearstler’ whose style is so over the top but I fantasize about it all the time. The ‘Property Brothers’ I know and love (personally) but they are two straight dudes and are way more contemporary, masculine and rustic than I am so I kinda knew that it wouldn’t be them (although ironically that’s who Brian got).

So I started taking the quiz.

(SPOILER ALERT – I analyze  how to get ‘me’ or ‘Nate’ or anyone else in this post, so take the quiz first so you aren’t influenced by my ramblings and then come back and read about how crazy I am). 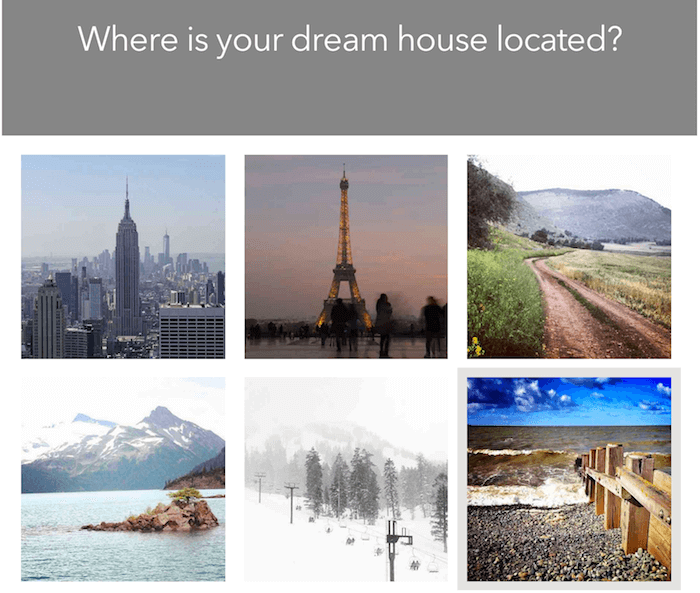 No problem. I love New York but I’m from a small coastal town. I love Europe but ultimately can’t be away from friends and family. I don’t ski nor am I ever perceived as someone who is super ‘outdoorsy’. So I’m choosing the top right. I’m from the Oregon coast so they might be assuming that I’d choose the bottom right, but the ocean is cold, scary and full of monsters and swallowed up planes, so I’m a river, lake and meadow person. The bottom left might be Oregon but I’m a green grass/sun person not a winter Oregon person. Jonathan Adler and Nate are probably NYC, Kelly is probably Paris and the PB’s are probably  the snowy mountain or the bottom left because they are Canadians. Not sure what is more “Emily Henderson” but I chose the top right. 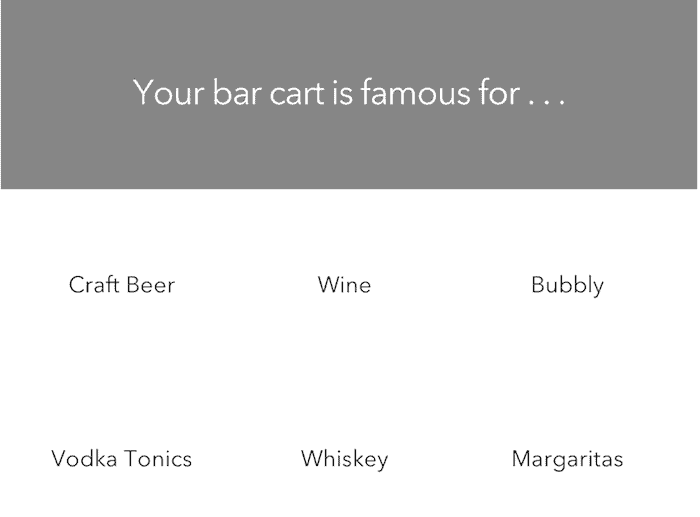 Ha. So this is tricky. I think they think “Emily Henderson” drinks either bubbly or margaritas because those drinks are the most”fun”. What they might not predict (or maybe they really do know me) is that for a bar cart on a Saturday night, I’m a whiskey girl – manhattans, old fashions, and many other trendy ‘ye olde-y meets 2012’ drinks out there. So this was one where I was nervous. I chose ‘whiskey’ but knowing that it might not be “Emily Henderson”. 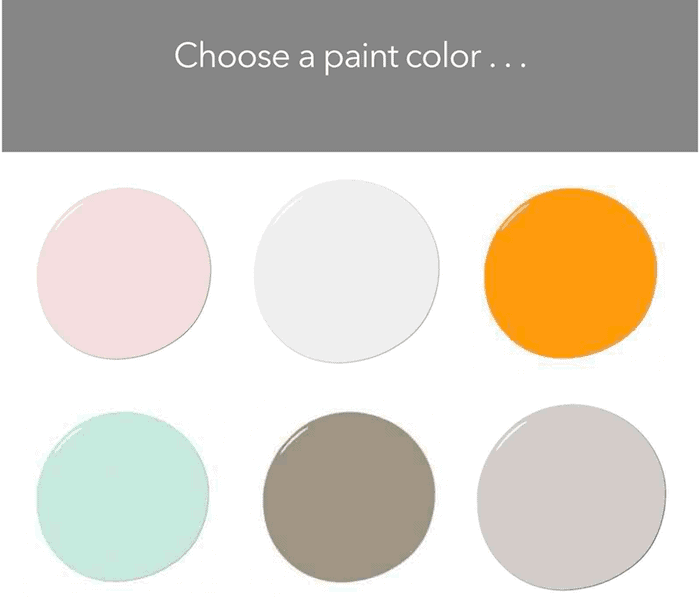 Alright. So for this question I just had to go with my first impulse  – the top middle gray/blue. Orange and brown were obvious ABSOLUTELY NOTS, and the mint is a great trendy color but ultimately I’ve not been on that trend train in my own house. Are they associating me with gray? That seems VERY unlikely as I generally use a lot more color. Or maybe the baby pink? Out of all the us I would say I’m the most ‘baby pink’ and yet not. at. all. So I chose my top middle gray because it’s what I would put on my walls and it was my first instinct. It’s not what I want on my body (this pink skin looks practically dead in gray) but i don’t think that’s what they are asking. Had there been a navy or teal that would have been obvious so I appreciate them keeping us guessing. 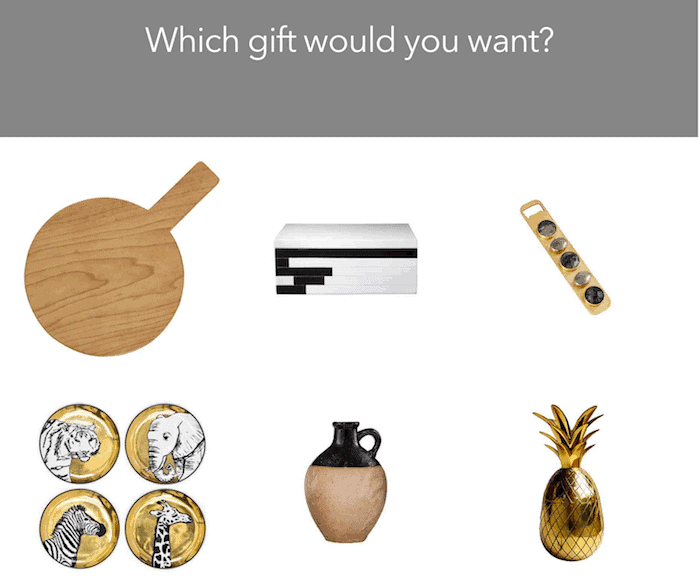 TRICKY TRICKY TRICKY. The new ‘Japanese mid-century Scandinavian with a side of weird’  “me” chose the bread board. It’s actually what I need. But I know that what ‘Emily Henderson’ would give would be that brass pineapple and they aren’t wrong. But they asked me what I want and right now I want that bread board because its such a happy circle in a pretty tone. Jonathan Adler is the animal coasters (I want), Kelly Dubs is the bottle opener (which I love), the white/black box is from Nate’s collection at Target (which I already own) so I’m assuming that’s ‘him’. I guess the Property Brothers are the rustic jug or the board. Again, I chose the board because its warm and yet graphic and modern … but I could be wrong … 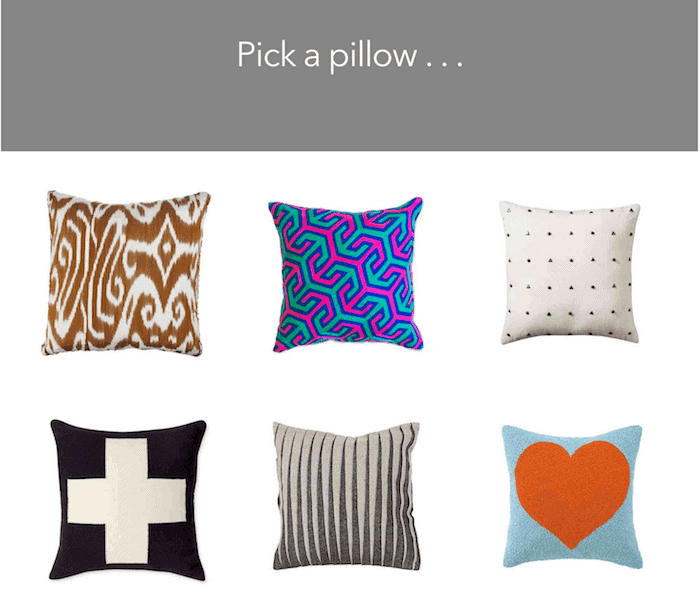 Ok, folks. This one is the hardest one because I know what they are thinking that “Emily Henderson” is that heart pillow. And if it were in a different color palette they would not have been wrong, for sure (White with navy? sure, shove it in my mouth). But orange and light blue are tricky for me. I thought to myself, whilst nervously chewing and swallowing my own hair, “if I don’t choose this pillow then I probably won’t get Emily Henderson and then I’m probably a total failure!”  So I panicked and chose it. Keep reading. 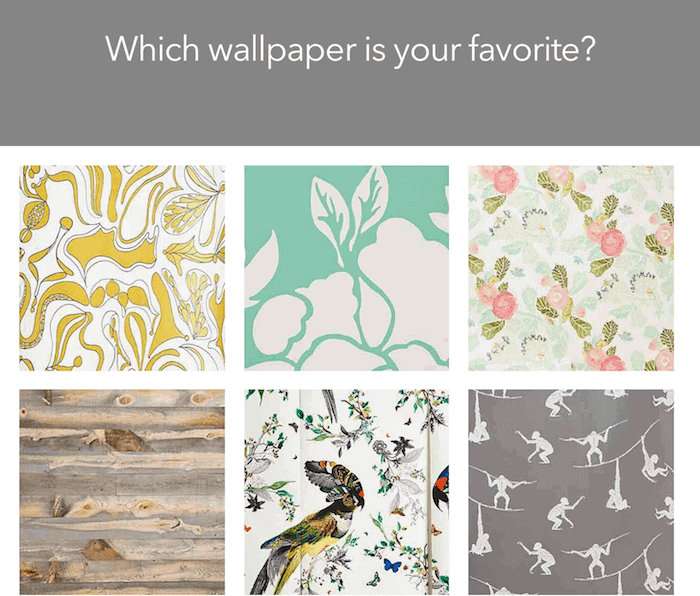 Easy. Hands down the chinoiserie with the birds and butterflies (middle bottom). The rest of them are hard to pinpoint “who” they are, but I’m assuming the property brothers are the wood wallpaper (which is what Brian chose) and the monkey wallpaper is probably supposed to be Jonathan Adler, but the other couple I’m not sure. Maybe the floral is supposed to be ‘me’, but I’m not sure. I’m starting to be very unsure what is me or not. 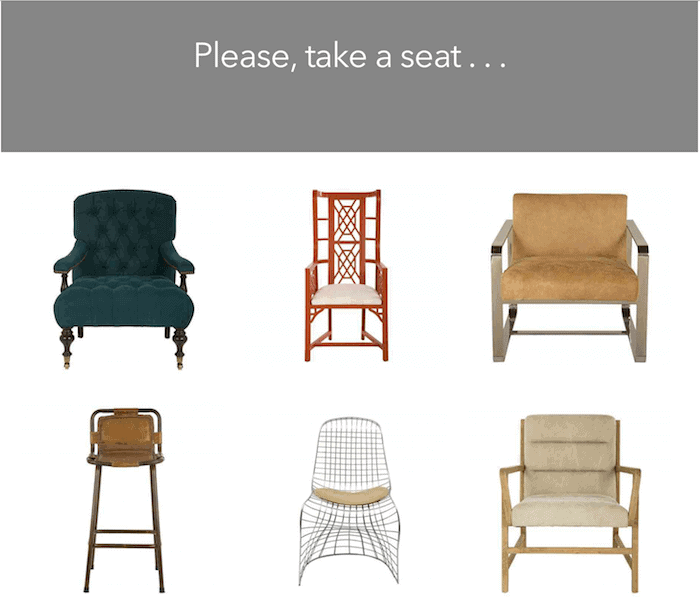 For this one I knew it was down to the tufted teal chair and the tall Charlotte Perriand stool. Both are pretty “me” (but are they “Emily”???) I do love some tufting and certainly that color, but I’ve blogged about that leather chair/stool for years and just sold 12 of them on Chairish so they are certainly not off brand. One is my cozy granny side the other is my mid-century dude side. Ultimately I chose the teal because It’s also comfy and classic which takes the win.

Anyway. After all those questions and lots of really meta thoughts, I got “Emily Henderson”. THANK the digital lord.

Then I went through it again and changed up the  teal chair to the leather stool, the heart to the dot pillow (even though I knew that was Nate’s from Target) and got “Nate Berkus”. Happy but immediately paranoid, I got obsessed and took the quiz like 27 times and either got “Emily Henderson” or “Nate Berkus” EVERY OTHER TIME. And then I was like, “Who “am” I? Emily or Nate? What does “am” mean? And is it more ‘me’ to be more Nate or is it more Nate to be more me? Am I more attracted to Nates style than I am my own, or am I more into “my own” than I am into “me”. Is “ME” an orange heart is or that just the perception of me to myself? Am I perceiving myself as a brand or a person or both? Am I half “Emily” and half  “Nate?”  Do I have a penis? Do I even want to be “Emily Henderson”? Am I more “me” because I like pineapples? Is that what “me” means? PINEAPPLES AND HEARTS!!!!???????

And then I took a bunch of unlabeled pills and slept for 9 days having Fear and Loathing style psychadelic dreams about tropical fruit and meadows and graphic floating hearts. Jonathan Adler called me ‘Petal’ again, Kelly Wearstler drank so many green juices, the Property Brothers playfully argued over who does more work (while we all know its Jonathan), meanwhile Nate and I spooned for hours and I felt like I was just hugging myself, unsure of whose leg was whose but not caring.

Leave it in the comments, and please, dear god, let there be at least some “Emily Hendersons” out there. Although I hear that she is certifiably N.U.T.S..

Subquestion, and possibly the most important question I’ll ever ask myself: am I, Emily Henderson, actually Nate Berkus?

5 Comments
Oldest
Newest Most Voted
Inline Feedbacks
View all comments
Our sites use cookies to improve your experience. Learn more