Well, folks, The Fig House has opened and its in full swing: currently being rented out for parties, weddings, birthdays, premieres and any occasion where one wants to have a good time in a beautiful space. To celebrate we threw quite the party for family/friends and some press … just a ‘hey guys, here’s what we’ve been doing the past 8 months’. It was pretty satisfying to finally show all my friends (including Brian) the final result of all of our hard work… also to prove that I wasn’t having an affair because I was gone so much.

We are working on the proper design posts with lots of before and after shots, resources, paint colors, etc, but this post is just to show off the party and say ‘thank you’ to everyone who made it out and contributed. 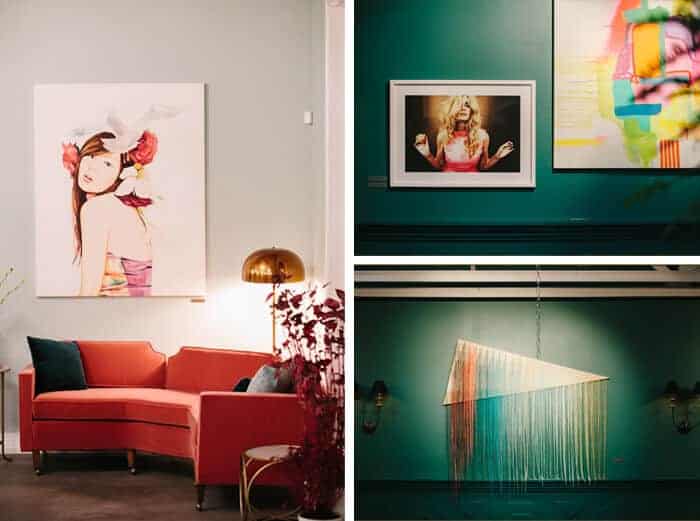 As you know Danielle Krysa, from The Jealous Curator curated the art and it was pretty darn stunning. That huge painting by Zoe Pawlak is amazing, the portrait by Stephanie Vovas and the weird and controversial (and intensely awesome) string sculptural pieces by Nike Schroeder killed it. Just killed it. I was so excited by how they all looked in the space at night. Sidenote: 1/2 the art sold that night and many more pieces have replaced those … it’s very exciting. 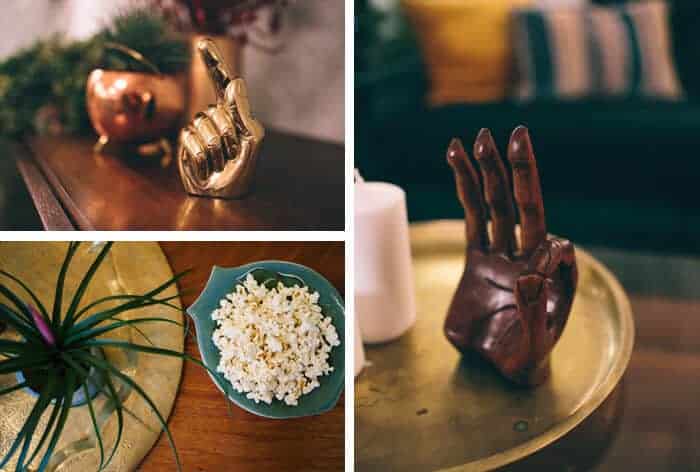 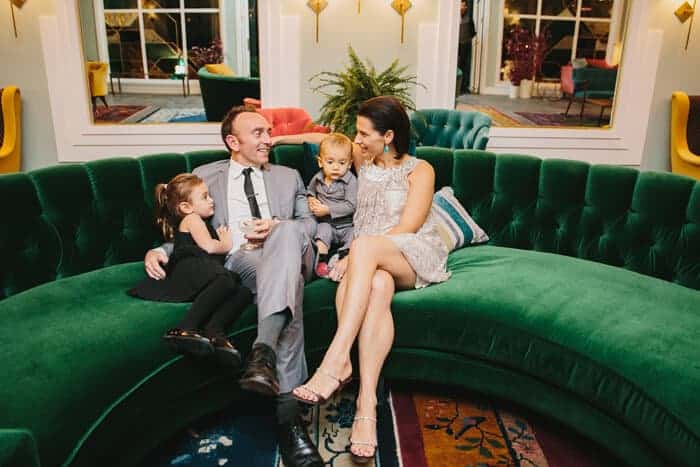 This is Mr. Steve Fortunato himself with his pretty adorable family adorning that pretty amazing green sectional sofa. Gosh, what I wouldn’t do for something like that in my new living room – the family and the house. 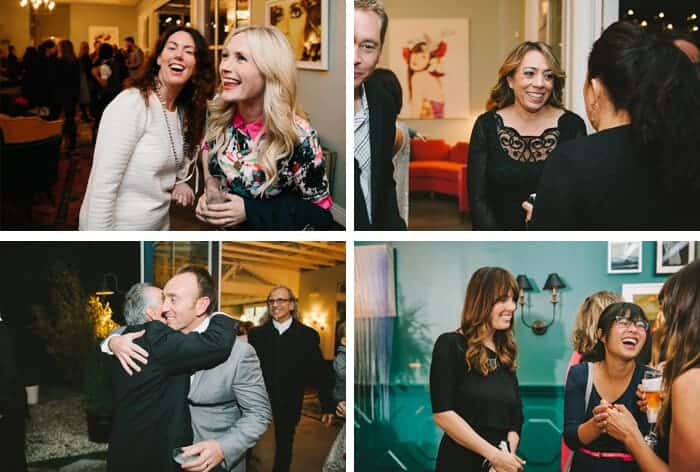 Clearly lots of hugs and laugher were had by some of our good friends, Paige from Bash, Please, Joy and Margaux – all the usual suspects showed up. Thanks so much, guys. 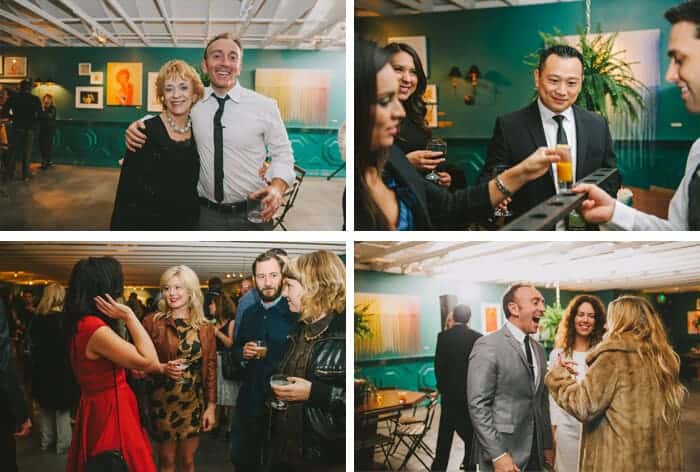 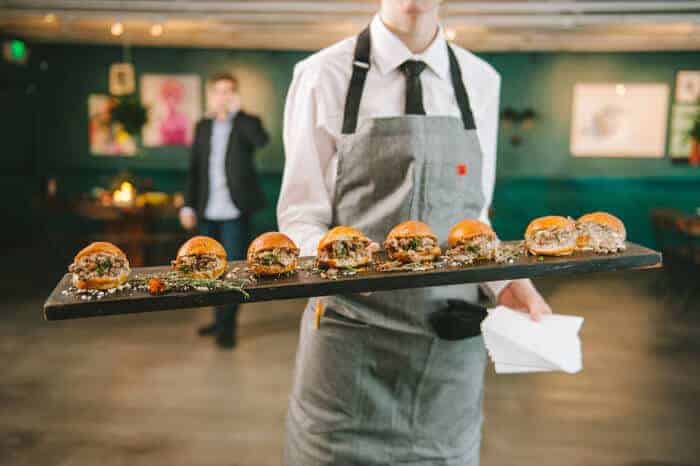 Room Forty catered the food and it was OBVIOUSLY delicious based on that photo above. I would like to slide one of those sliders in my mouth right now. That night was like a wedding to me where I was so busy talking that I think I tasted the food, but would like another shot at it. 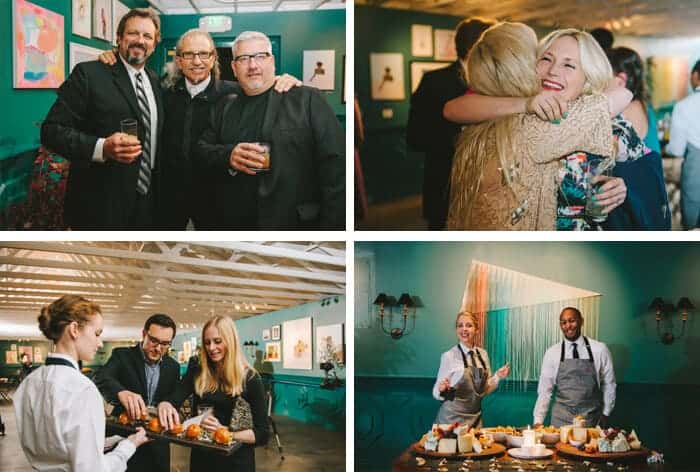 By the way it wasn’t that bright in there, there was just a flash on the camera – don’t worry. RoomForty also had this huge fromaggerie station, which is a station that I would like to be at more often. 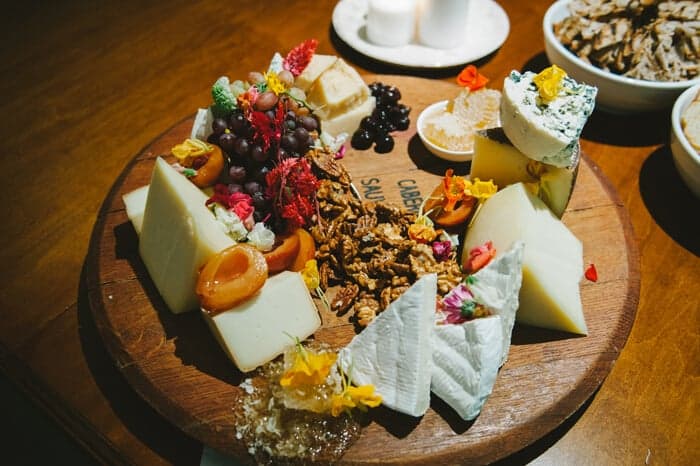 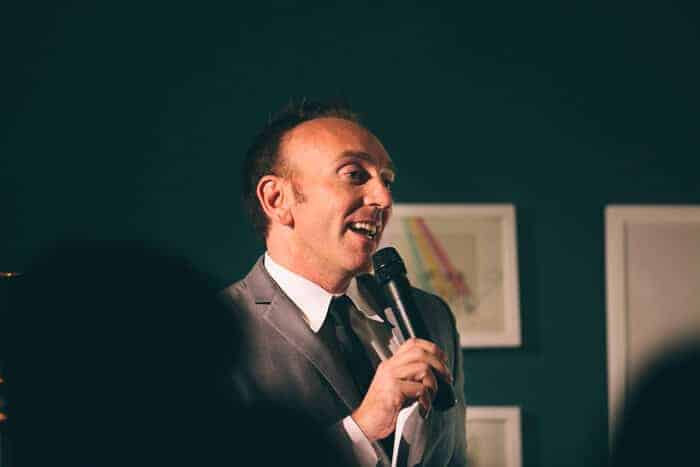 Steve gave a big thank you speech to all the people who had worked really hard on the project – which were A LOT. These included the amazing General Contractor Ken from KD Constuction (my favorite contractor in the world and not to mention such a great person in general), the stained glass artist (who with my art direction created some pretty incredible doors that even the new Ace Hotel Downtown LA hired to help with theirs afterwards), and of course the design team – us. 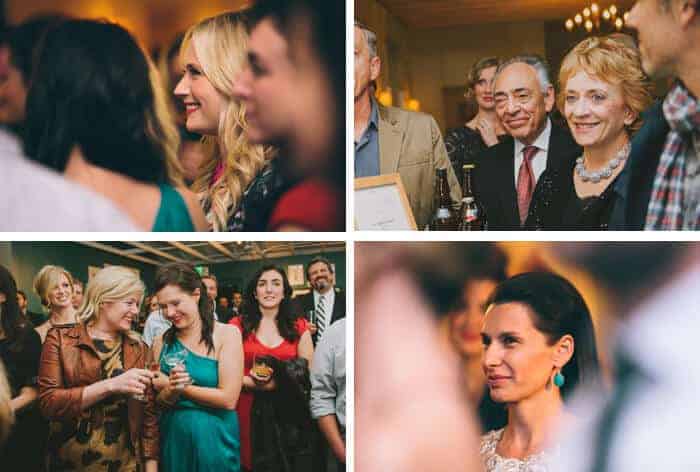 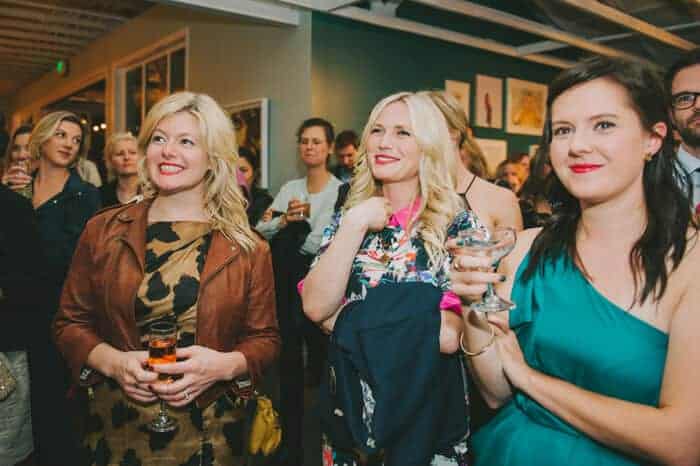 Speaking of which … these two ladies (above) saved my life/sanity in this project. Dean Fisher and Ginny Macdonald are two VERY good designers and such incredible collaborators. Every single meeting was fun and we were always on the same page artistically; you have no idea how rare that can be. The chemistry was just so right. I’m lucky enough that Ginny is actually working full-time for me now, and Dean is back in Chicago doing a lot of design work with her company South Social and Home, and working with Home Polish (hire her, she’s AWESOME). 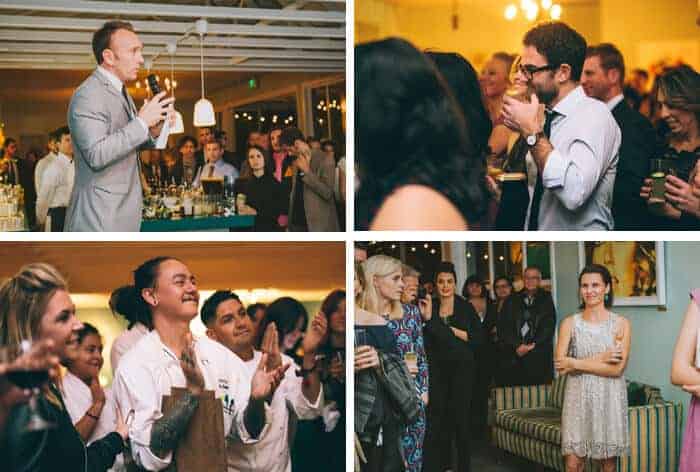 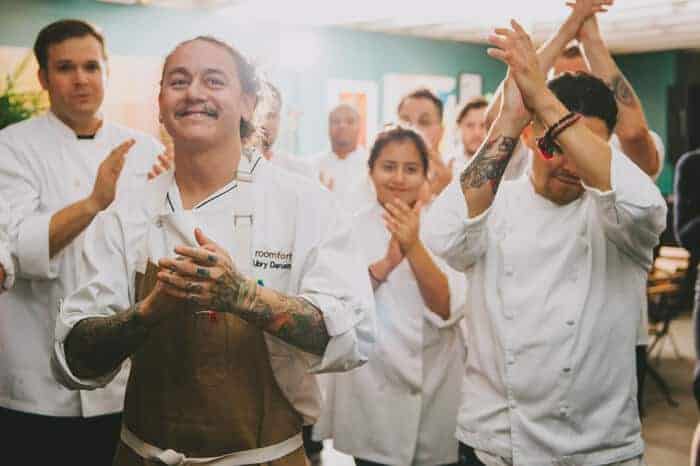 That’s the head chef at Roomforty, Libry and his crew who now have a brand new, state of the art kitchen to work in and get new awesome tattoos in…. Those are some badass chefs, no? 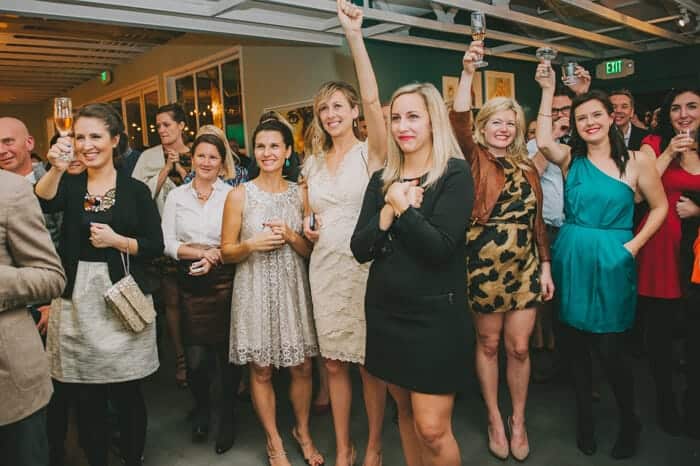 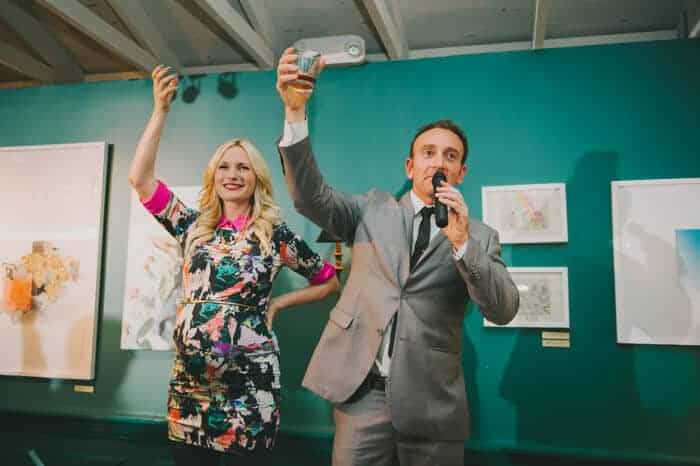 Ha!!!! This is us cheersing to the success of The Fig House. I was 37 weeks pregnant obviously, but that doesn’t stop me from celebrating. (That dress, by the way is another non-maternity dress from TopShop that is just REALLY elastic-y … its holding on for dear life, but so much better than most maternity dresses … here’s a link to similar dress). 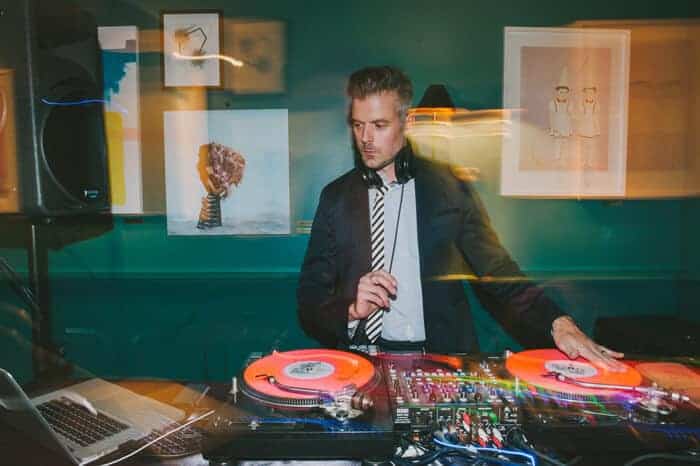 He was the DJ, you get it. And he’s awesome because he makes people dance and laugh and lose control, as you can see … 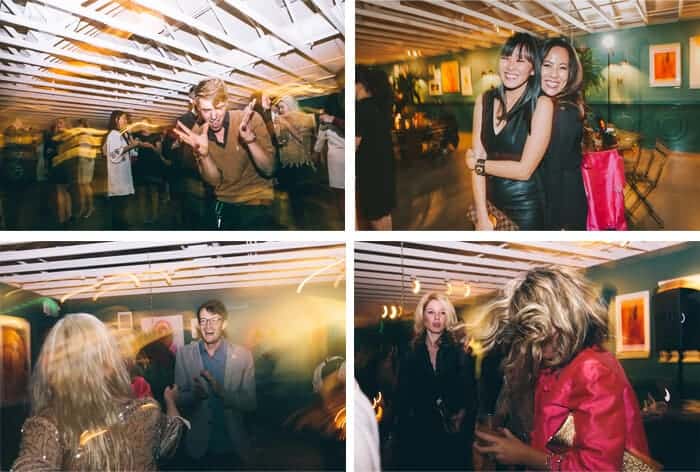 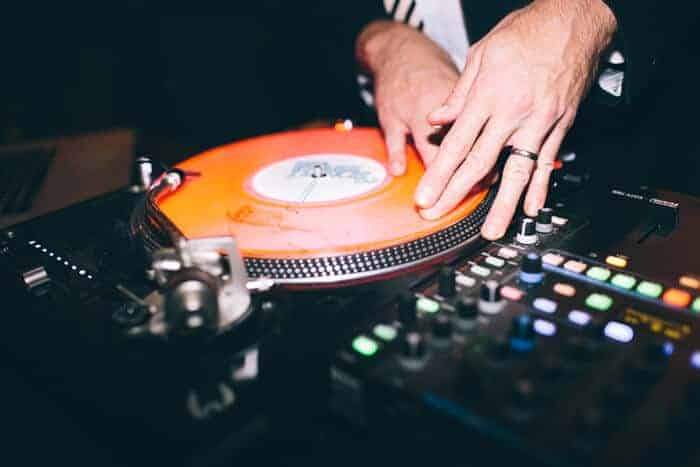 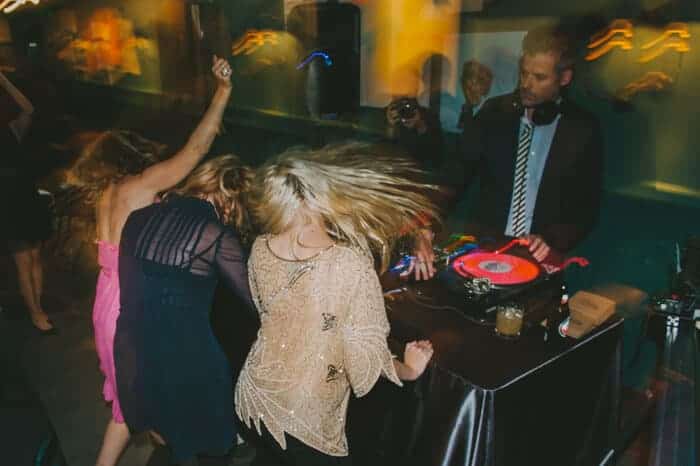 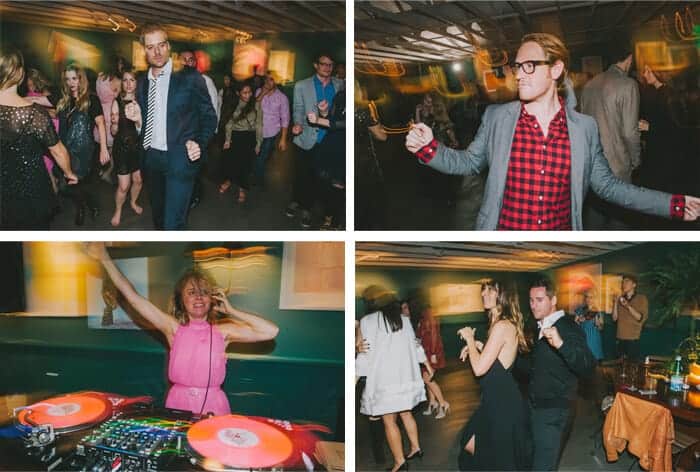 It rained so we had to have a tent out front but that doesn’t stop you from seeing the intensely beautiful stained glass that Judson Studios did.

All in all it felt like a wedding. Something that we had planned for months  – not necessarily the party but the unveiling of the project. Except I wasn’t drunk. Strangely it was still such an exhilarating high and I had sooo much fun. 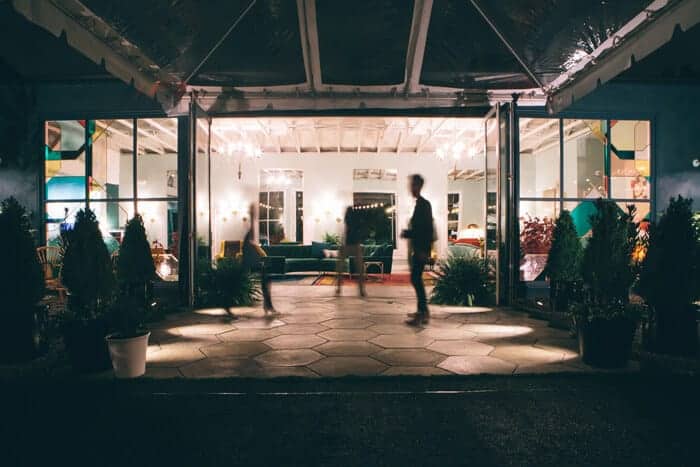 The exterior is getting all landscaped now, ready for all the summer weddings they have booked. Its all just very exciting, indeed.

All in all an incredible project and a pretty dope space. Cheers to Steve Fortunato, Room Forty, PharmacieLA, Our Labor of Love, Woodnote Photography, Flashdance, Sharkpig. All of you are pretty much the best and I want to smother you out of love.

If those photos weren’t enough and you want to watch a video about the night, you are in luck … Thanks, Sharkpig for once again being weird and generally awesome.

Photo Credits | Our Labor of Love and Woodnote Photography

Such a gorgeous space… and AMAZING video. You not only get to see the Fig house, but the video really makes you feel what its all about. Love it!

It’s such a gorgeous spot! I love the colors and the stained glass. You did such a great job designing. It’s amazing to see it after all that hard work.

This is so amazing. Can you please please share where the sculptural hands are from?? I’m DYING over them and I fear if I wait til the source post to find out I may be dead. Well done!

Dear Emily,
Beautiful job! I am hopeful you will give us many more details about the space, along with your lipstick color.

That lipstick color is just effy awesome! Please reveal what is it! Thank you!

Emily, the Fig House is OUTSTANDING!!! What a transformation ala your many talents. Kudos to you and your team!!!

I second that on the lipstick color and your hair is unreal how beautiful it is! Your stylist is a god/goddess!

I’m so glad you said yes to this project! It turned out amazing and what an amazing business venture for that family! So glad they put their money into a designer where it counted!

p.s. i love following not only your blog but insta and am so happy for you and your lil’ family! it makes me want to have kids more and more every time i see #charliehendo

absolutely incredible! you are so talented, and I can’t wait to see more about the transformation of this amazing space 🙂

The space, and the party, looks so fun and energetic. Can’t wait to see the behind-the-scene posts about the project!

Gorgeous space! I wish I could get married all over again just so it could be held here!!

And I agree, I need to know more about that lipstick color!

Ugh! That I had to miss this is the WORST thing that’s happened in my whole life.

Just beautiful! Also, random question. What lipstick are you wearing? I’d love to know because you always seem to wear great looking dark pinks and reds!

What a fun night! Amazing job on the Fig House…you should be so proud. Congrats on the success of this amazing project. Cheers!

Beautiful images and such a lovely space! I love the grouping of the rugs. Genius.

My jaw is still on the floor! And how gorgeous are you in those photos! Thank you for sharing! So fun! You are bringing stained glass back, baby!!

It looks so so fabulous! Of course, I zoned in on the fact that you sold so much artwork on opening night– kudos!! Has new art been selected yet? Will we get an update? Artsy minds are dying to know. 😉

I can not get over your stained glass. I want to lick it.

0
danielle (aka the jealous curator)

gorgeous!!! so happy that you asked me to be part of such a beautiful project xo!

exquisite and funky at the same time. Way to go

Gorgeous work, Emily! Wow! And the artwork above the red couch, who’s that by? I don’t thing you mentioned it – it’s so stunning! Danielle did an amazing job!

Hi I am so grateful I found your weblog, I really found you by mistake,
while I was browsing on Digg for something else, Anyhow I am here now and
would just like to say cheers for a tremendous post and a all
round exciting blog (I also love the theme/design),
I don’t have time to look over it all at the moment but I have book-marked it and also added
in your RSS feeds, so when I have time I will be back
to read a great deal more, Please do keep up the excellent job.

Congrats on such a stunning project. Nothing more gratifying before having a baby. Can’t wait for the project details – that green paint is perfect!

It all looks amazing, congrats on such a great project and party!

I too would love to have that green sofa in my next place! The Fig House certainly looks like a dream come true venue for any social occasion. The pics of those mouthwatering sliders make a strong case in support of hiring Room Forty to cater as well!