As you know I’ve been working on my first big commercial project called The Fig House for about 11 years, and by 11 years I mean 8 months – as long as I’ve been pregnant, actually. Lots of birth metaphors could happen here, for sure, but despite the timing I will not be having my child at the opening party and no, his name will not be Figueroa (the street its on for which its named).

So, here’s the story, Steve Fortunato, the lovely, intensely passionate man who owns and runs RoomForty (delicious high-end and yet not pretentious catering) hired me and told me I could do whatever I wanted within budget (which was the only way he could get me to do it because the idea of an event space sounded cold, sterile and generic) and I did WHATEVER I WANTED.  Its technically his baby (I have nothing to do with it business-wise) but its also TOTALLY MY BABY.

Its been an INCREDIBLE project to work on.  Just insane in every way. Check out all the before photos HERE.

…. And now, party people, we are ready to rent it out and dance it off.

We have some exterior landscaping to finish before wedding season but the interior is pretty much done and every time I walk in I get more and more excited – border-line inappropriately excited.

The general concept of the space design-wise is different than any space in town. There are a few really great venues that you can book for parties if you want something that feels cool, industrial and with a mid-century vibe, but they are all a bit masculine and it would take a lot to transform into a pretty and elegant space – its just not their thing, necessarily.

I wanted this space to feel more 1920’s Hollywood …. meets 1980’s party…. meets 2014 Highland Park. The furniture is tufted velvet, the side tables are refined teak or brass and the stained glass is worth the rental in itself just for that photo. It is full of one of a kind vintage pieces (all handpicked and redone by yours truly) and the walls have tons and tons of amazing art from local artists, curated by Danielle of The Jealous Curator who did an INCREDIBLE job.

In short: It’s Gatsby meets Andy Warhol meets Marie Antoinette.  It definitely has an art deco appeal, but in updated lines and colors – and with an edge.

While normally in life I like to under-promise and over-deliver (tempering expectations and then blowing people away is kinda my MO) I will say that every time I walk in I simply love it. Since its been open (as of last week) I’ve even just stopped by to visit it – saying hi to no one, just sitting on the massive green velvet round sectional, drinking y 1/2 decaf coffee and staring at the stained glass (by Judson Studios). Its just a space I want to be in so bad. The light is beautiful, the furniture is comfortable and while it feels stylish, its cohesive enough that it still feels calm.

Shoot. I think I just went from under-promising to officially ‘accurately promising’.

Many people have asked what happens at the Fig House, so here goes:

The Fig House is an event space that you can rent out daily or nightly for photo shoots, weddings, parties, premieres, TV shows , pop-up shops, or ANYTHING where you want to gather around people in a cool space. We have booked everything from Bar Mitzvas to 40th birthdays to Reality shows (in fact our first event last week was the show Chopped).

In fact the ladies at Bash, Please have a big holiday pop up party: 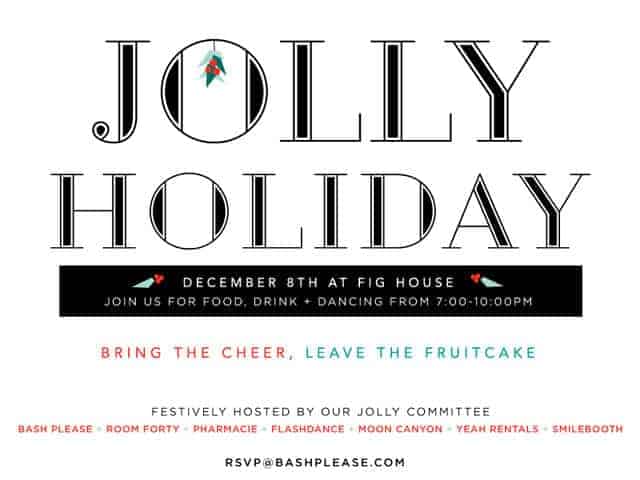 If you are interested in your own private tour for any upcoming events email events@fighousela.com. Allison will take great care of you and make sure to reference me, just because. 🙂

While anyone that is interested in having an event can have a tour and anyone can go to the Jolly Holiday craft fair, the opening party itself has to be relatively limited due to space/cost. So while I’d love to invite everyone in the world to see this space and dance to Michael’s tunes, sadly I can’t.

I would however love to GIVEAWAY 2 sets of tickets to the opening party. All you have to do is ‘like’ The Fig House on Facebook and then comment that you did. I’ll let the two winners know by monday (each winner gets two tickets).

In case I haven’t thanked you enough, thank you Judson Studios for the amazing stained glass, Farrow and Ball for your incredible paint colors and wallpapers, Lamps Plus for some seriously perfect sconces and lighting,  The Jealous Curator for some amazing local art curation, and of course Ginny and Dean who were my project managers and lead designers on the project and were not only perfect designers and managers but have been an absolute pleasure every single day to work with.

And of course, last but not least, Mr. Steve Fortunato for having idea and giving me creative permission to design the space – its kinda the ultimate gift you can give a designer. So thank you. 🙂