If you follow me on Instagram you have probably seen shots of this house that I’m designing. I’ve been working on it since March when it looked like this: 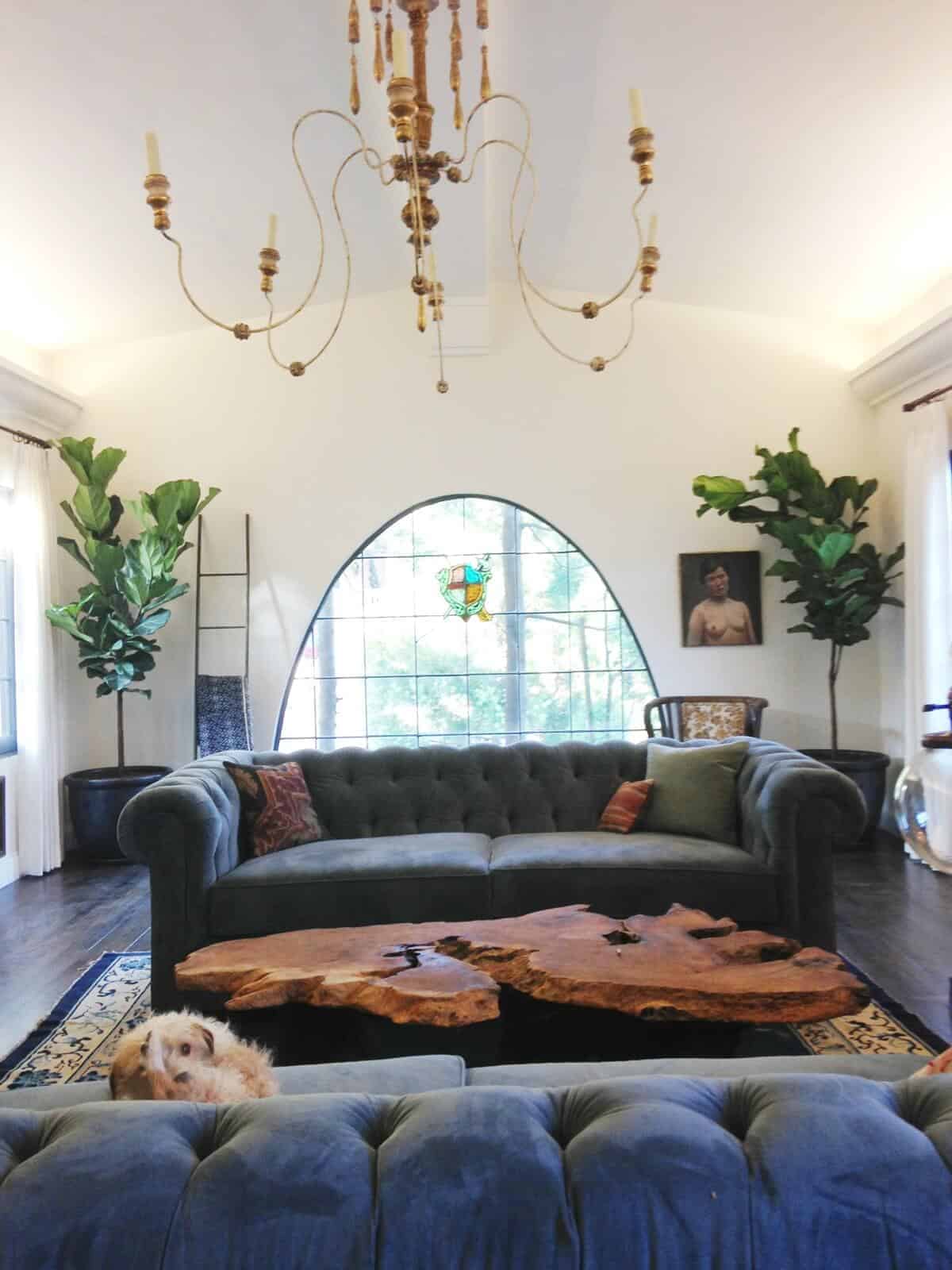 The rug is a stand-in until I find an antique Oushak that we love, though a 10′ x 14′ rug is hard to find and expensive — trust me. Obviously it’s not styled, etc., but it’s totally livable and so pretty. The clients are out of town for another month so I’m scrambling a bit to finish, but secretly loving the freedom of not having them there when we play around and style.

Those sofas are from Dekor in Los Angeles (an awesome vintage store run by a designer who can have anything custom made) and can be made any size, any fabric, etc. Tell Isabelle that you saw it here and she’ll know which sofa you are talking about. We love the sofas — so comfy, cozy, and totally indestructible since they are in performance velvet (great since they have two cats and two dogs — one who apparently likes to lick herself while getting photographed).

It’s really painful for me to show these unfinished, unstyled iPhone process shots, but I also know that I love seeing this kinda stuff on other people’s blogs, so here goes. If you judge me, I’ll sick The Bear on you. It’s all still a work in progress. It’s looking REALLY good, but no, I’m not satisfied yet.

Alright, here’s the hallway which is going to become the library area: 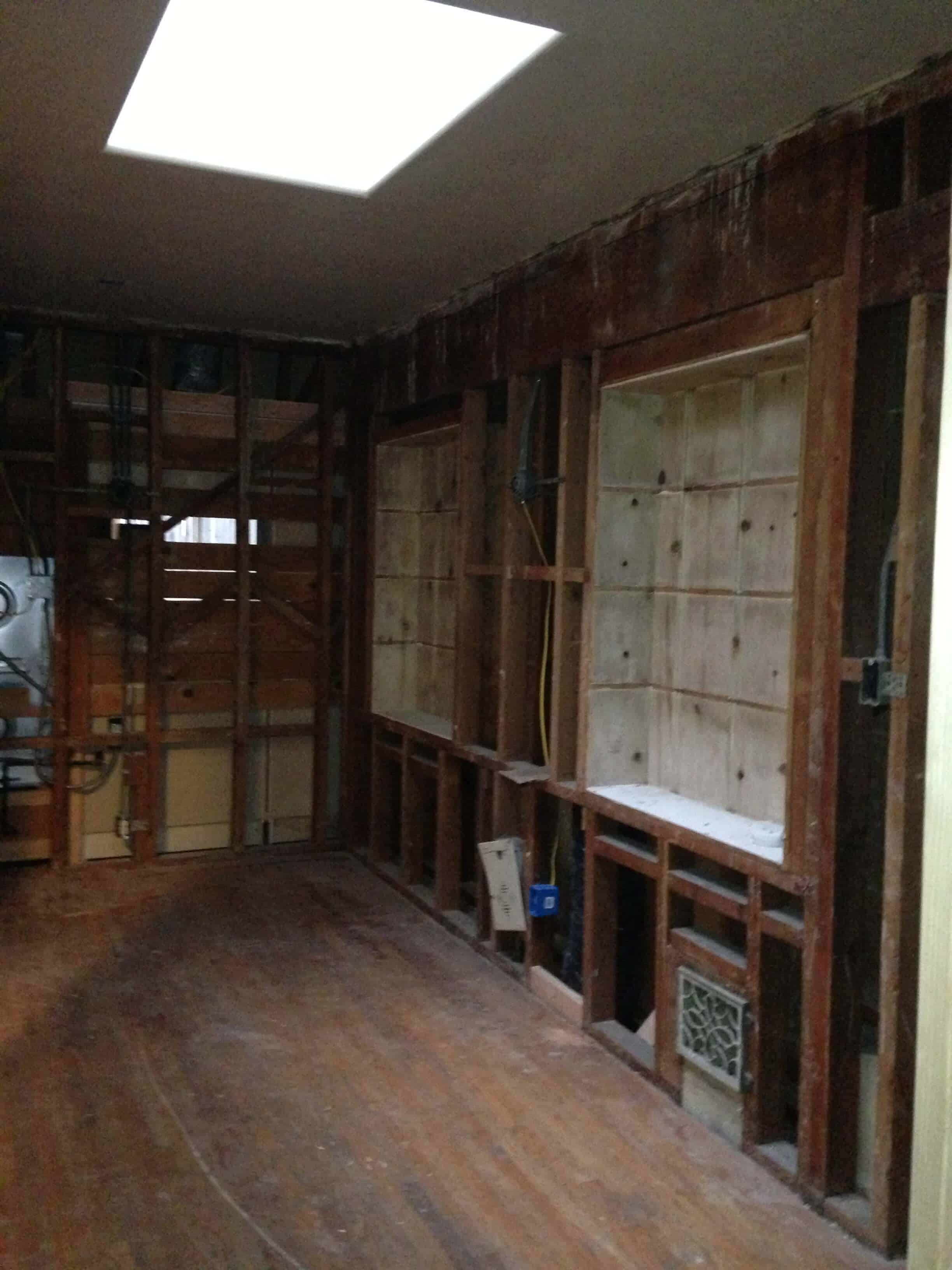 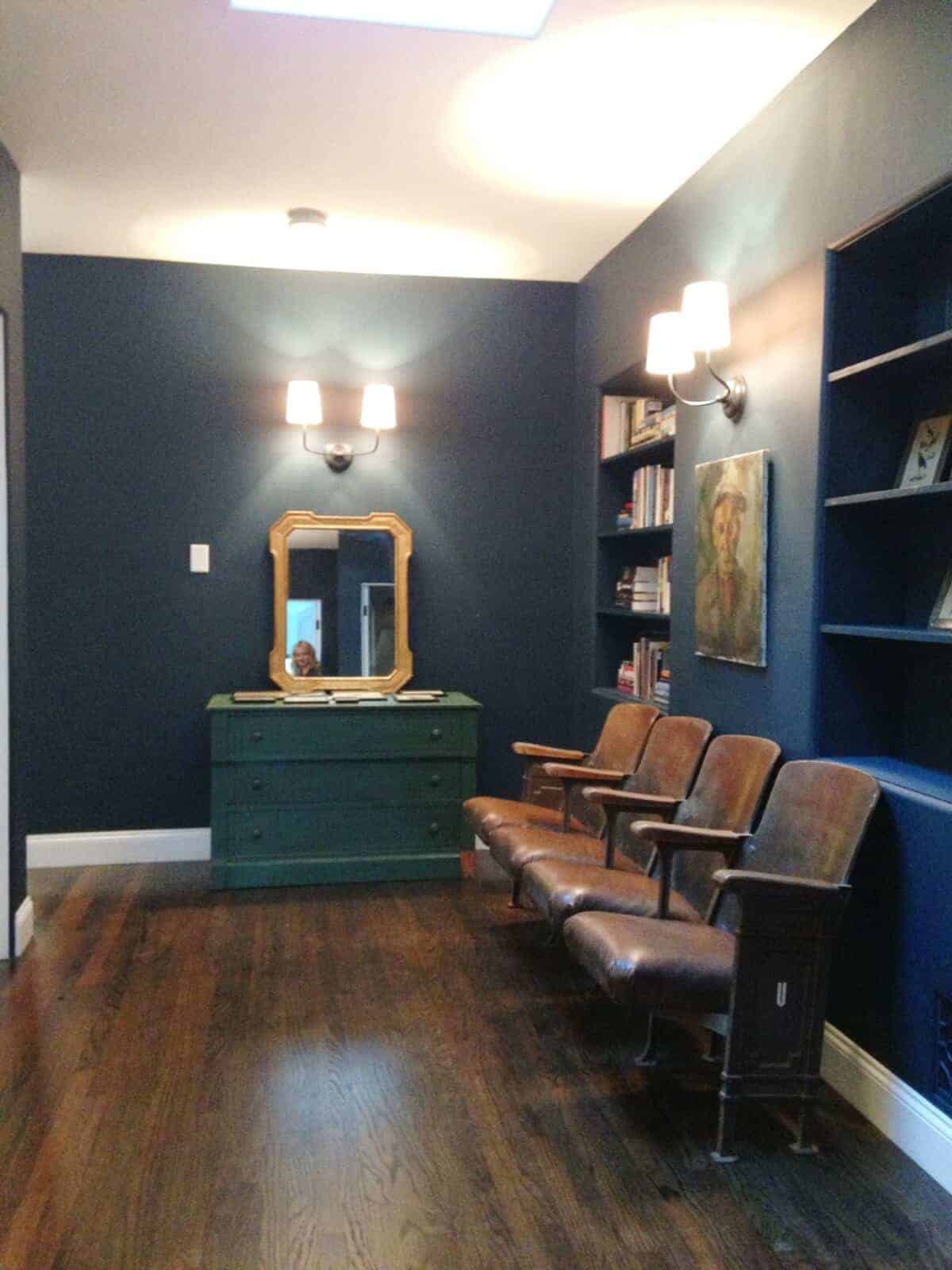 Again, not finished, but coming along, and yes, that is my favorite navy blue paint, “Hague Blue” by Farrow and Ball. I’m LOVING where where this room is going. We have the rug ordered and I’m not sure about that green dresser there, but it’s coming right along. 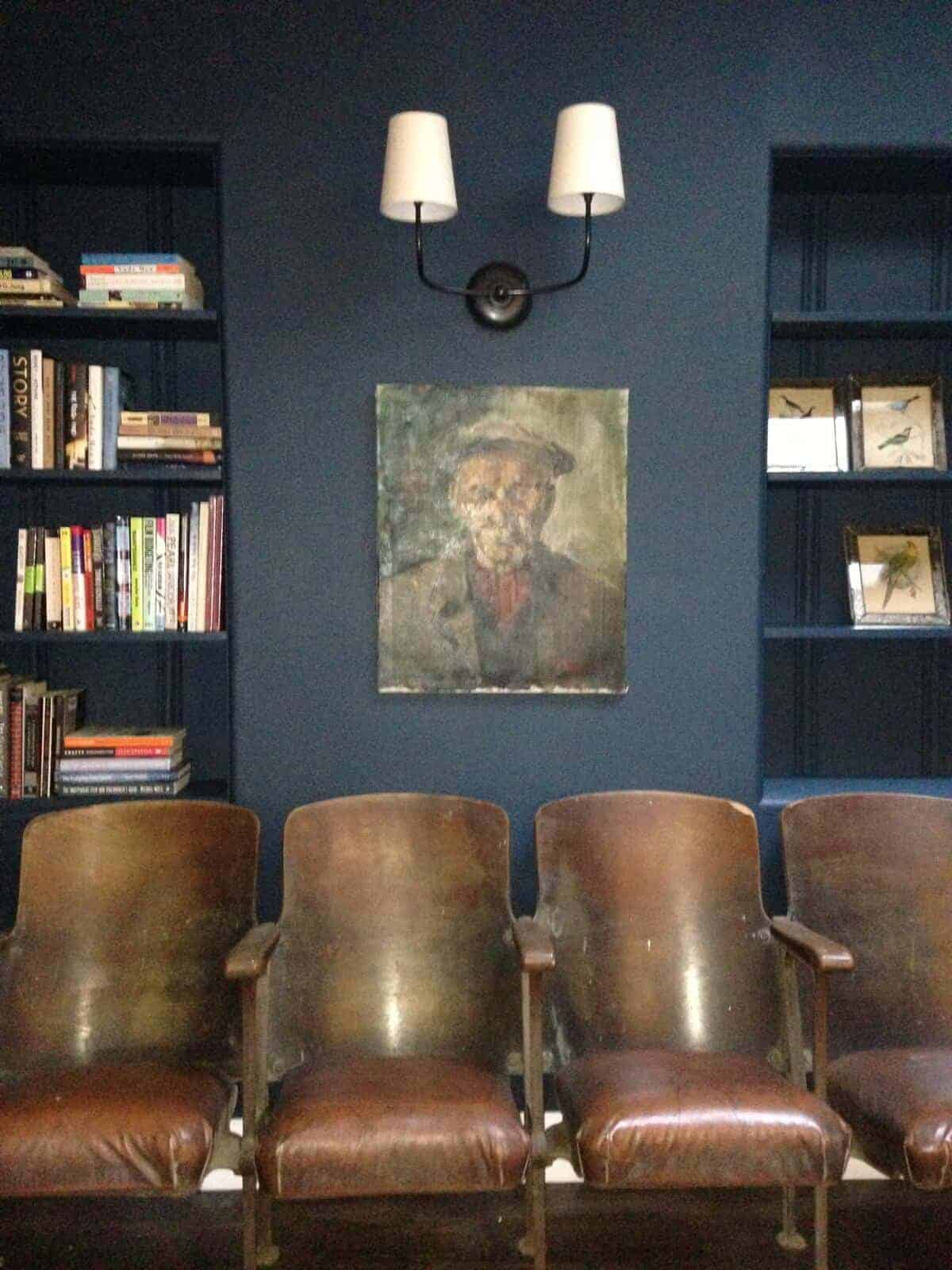 The kitchen was a pretty big challenge. When I came into the picture it looked like this: 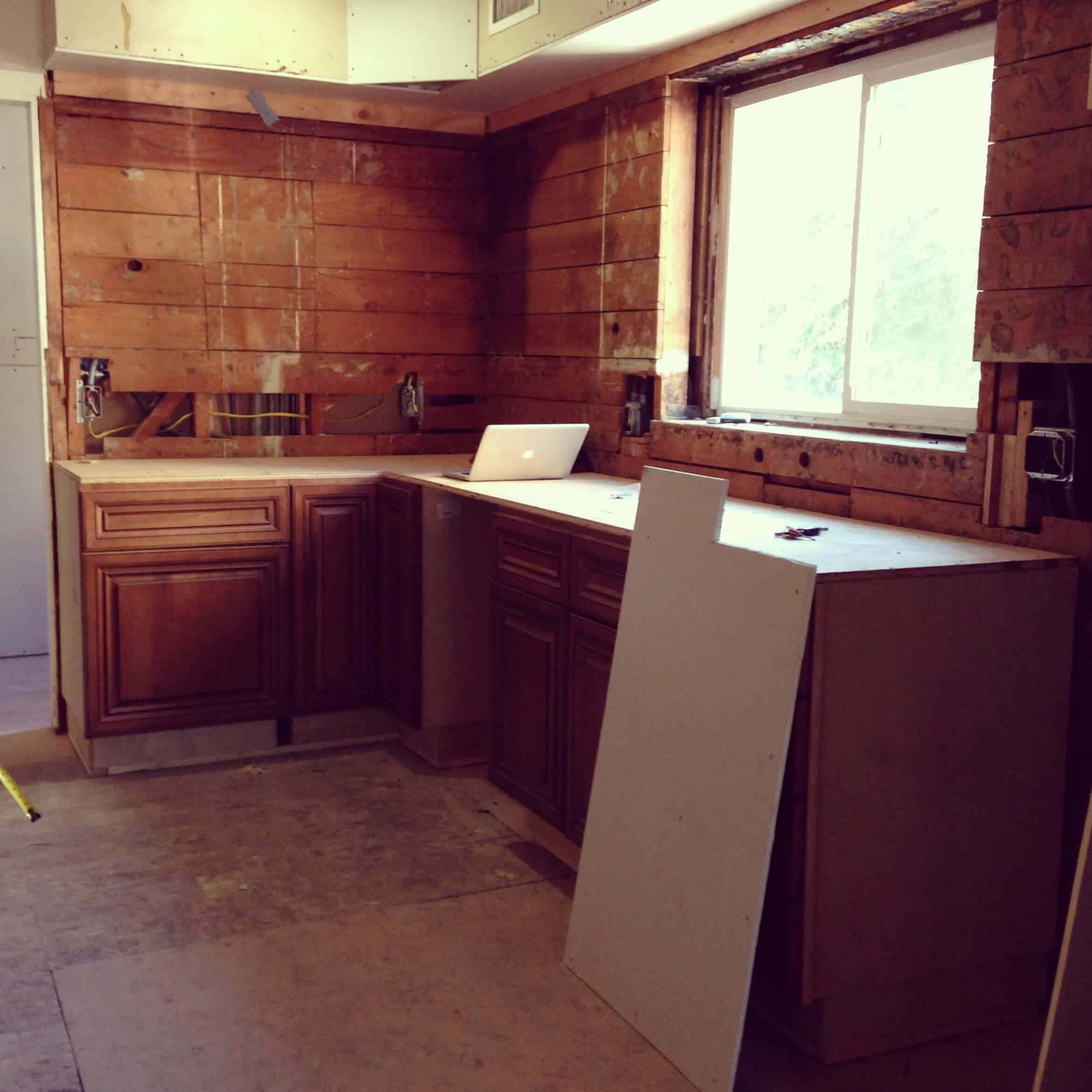 WAIT!!! Actually it had upper cabinets that had all just been installed by a house flipper. Without going into the whole story (which you will get at some point when I go room by room with the total before and afters) we decided that it was just so heavy, dark, and small in there, so we took them out.

But she is looking MUCH more appropriate to her 1920 Spanish roots: 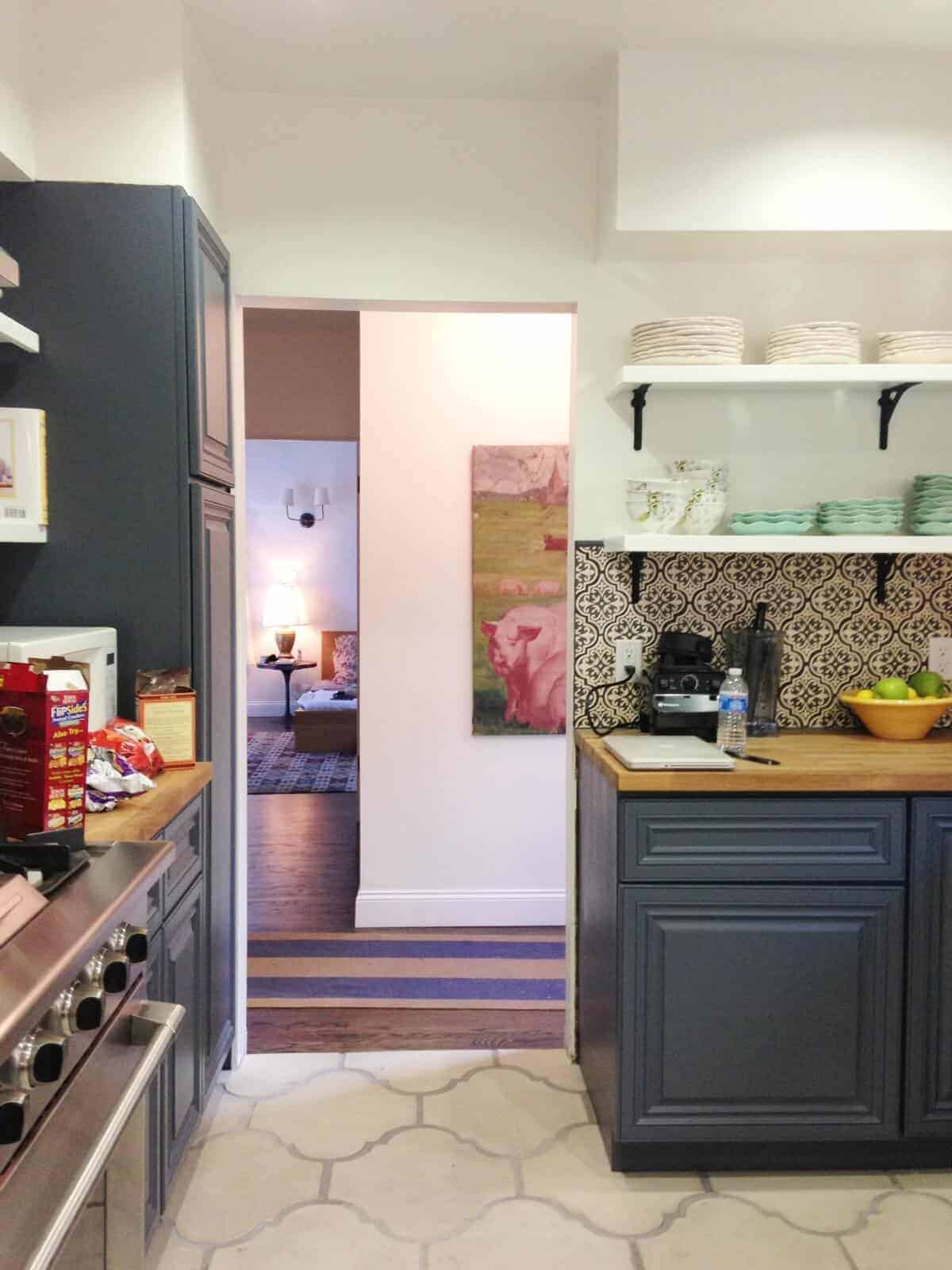 I love that cement floor tile so much. We are having to figure out how to reseal it because it loves dirt, but it also is aging already really beautifully …

When I first arrived the bathroom was already gutted and looked like this. The tile and fixtures the flippers had picked out were unspeakable so I jumped in and frankly saved this house from “Real Housewives of New Jersey” land. 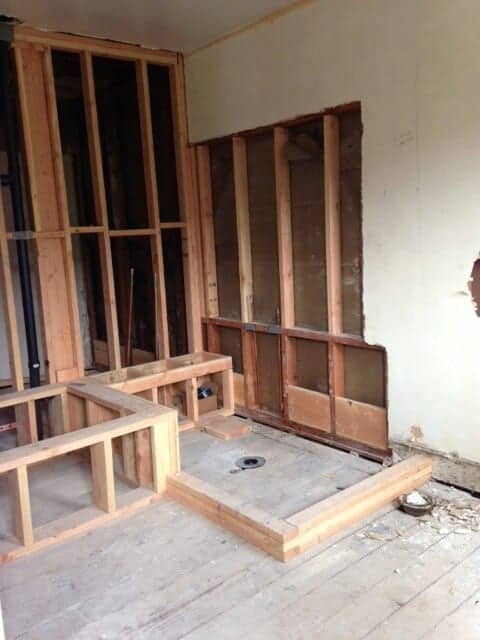 It’s quickly becoming one of the happiest rooms in the nation: 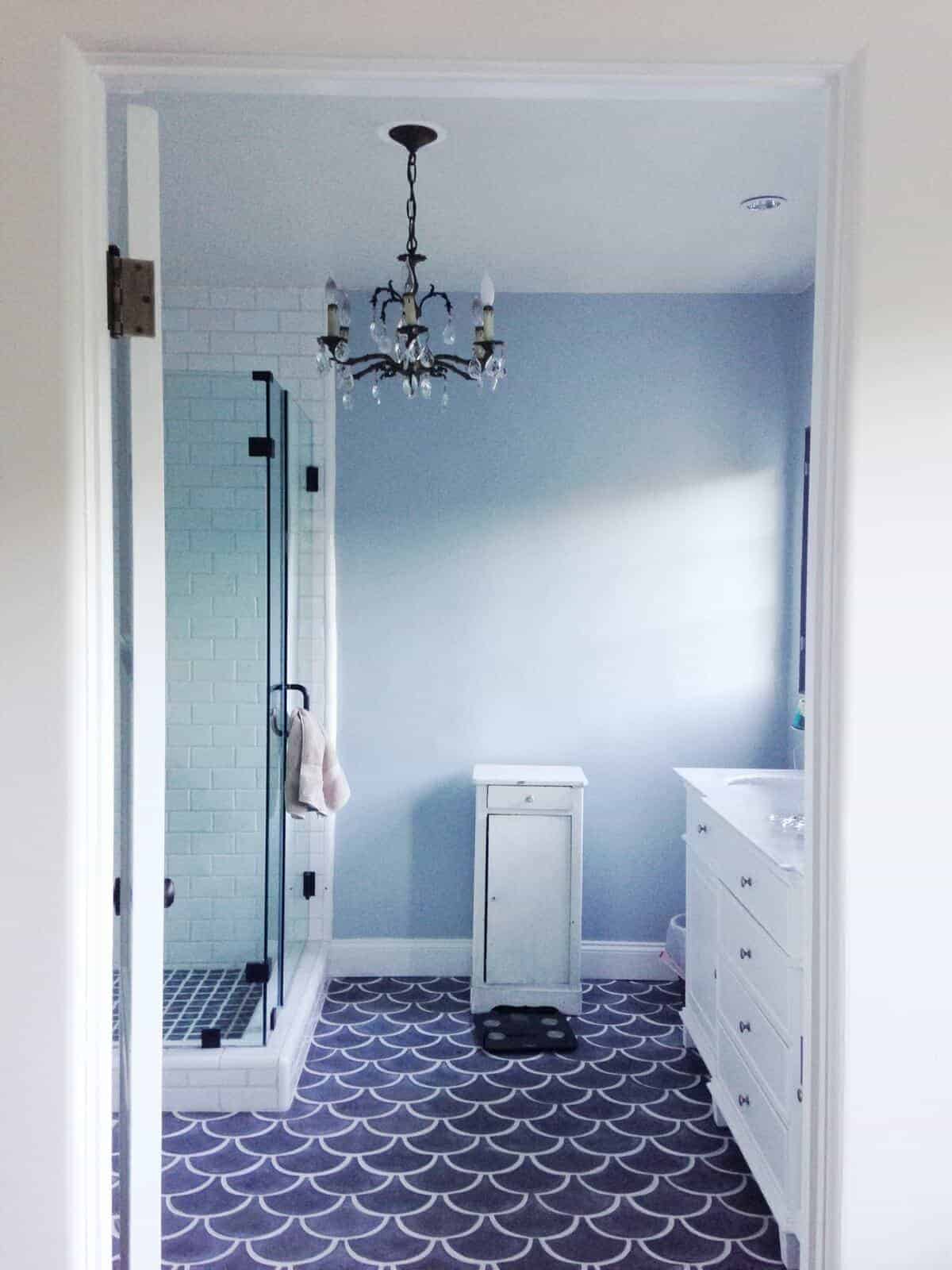 OH that floor tile, how I love thee so much. 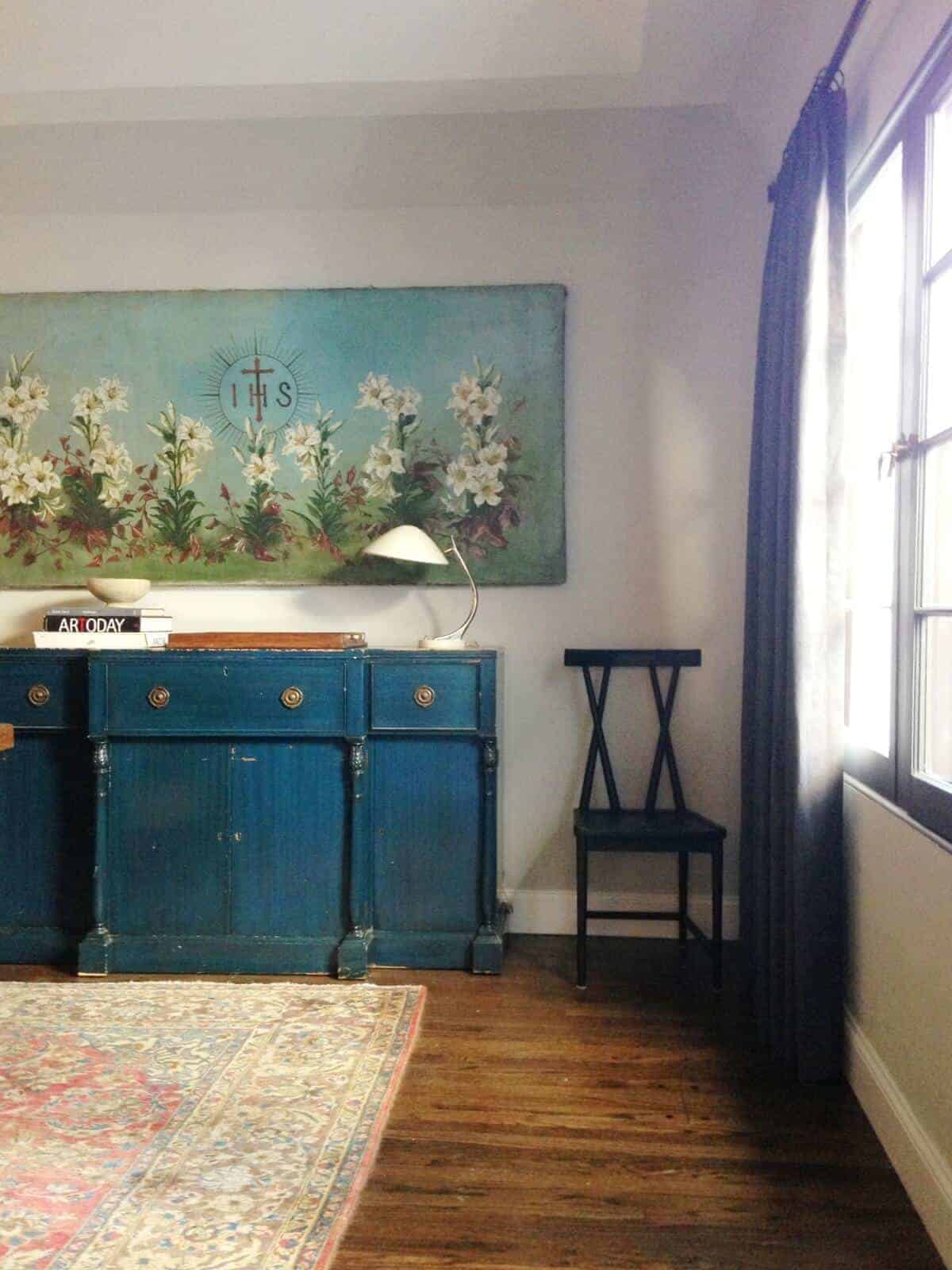 The dining room is coming along … well, we need a table and new rug. 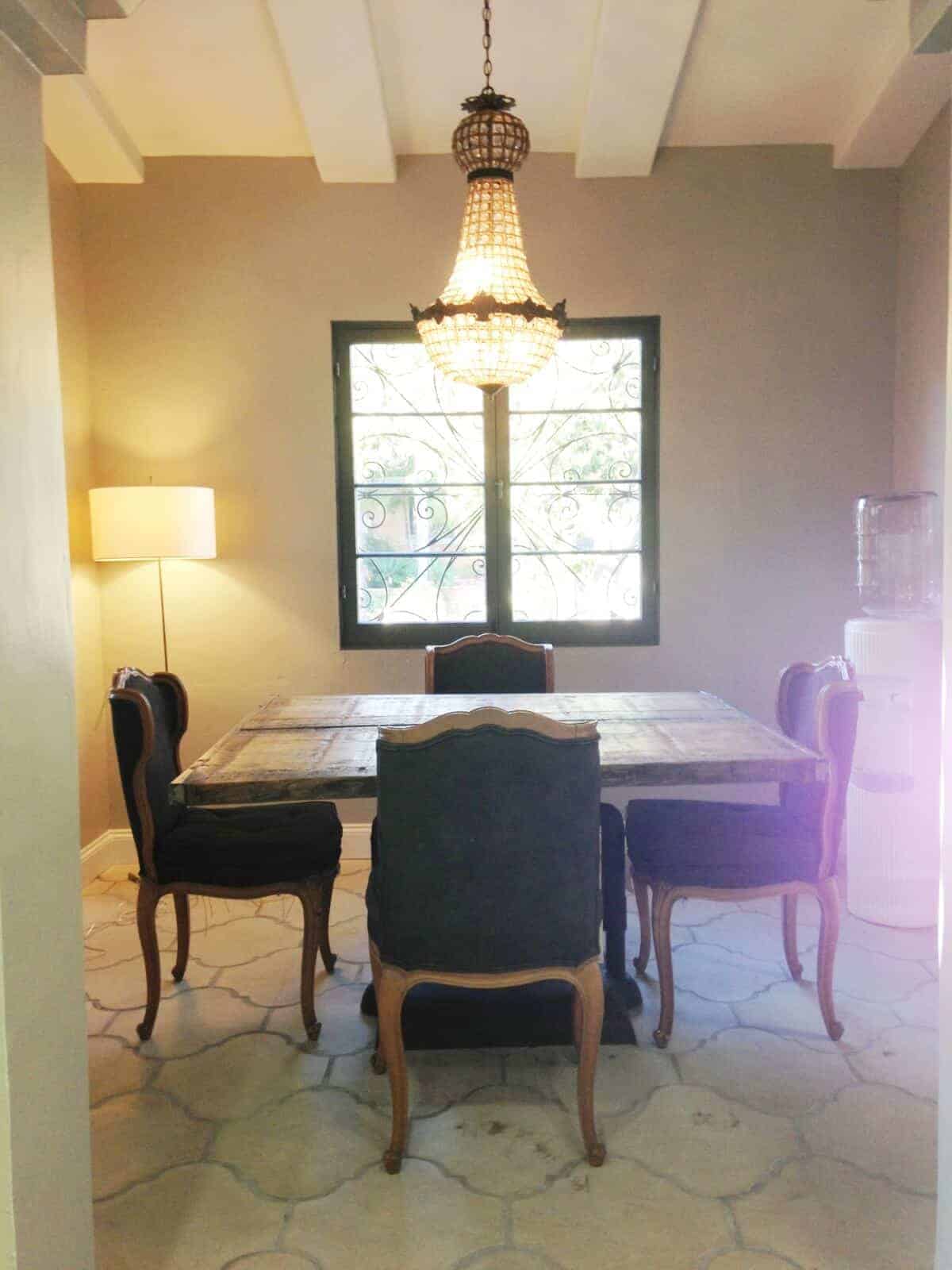 The dining nook is coming along (sorry, we just installed that chandelier and didn’t sweep before taking these photos).

Overall the house is something that I’m super proud of. It’s 1920’s old world/Spanish revival meets 2013 young Hollywood couple. I apologize for the lack of resources on this post, but when I post about each room I PROMISE you’ll get them. If you have any specific questions, leave them in the comments and I’ll try to get to them. Meanwhile I’m scrambling to finish this bad boy up …

24 Comments
Oldest
Newest Most Voted
Inline Feedbacks
View all comments
Our sites use cookies to improve your experience. Learn more