This is one of those ‘i’ve got cool friends’ posts where I tell you how I have cool friends. Cause I do. I swear. The guys that make most of my videos, Sharkpig, have a new studio (called The Social) and they decked it out in such a weird/awesome way that I had to show you. I didn’t design it, but if you’d like to give me credit I’ll take it.

When you arrive at their studio it looks like this: 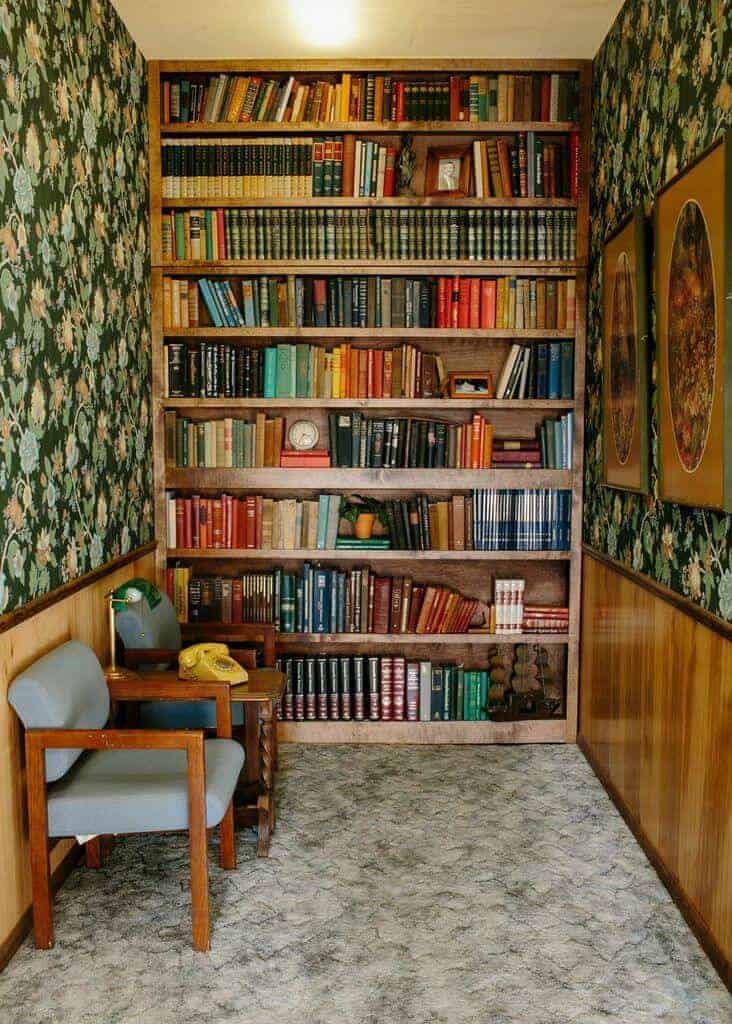 A weird 70’s waiting room. It’s what we call ‘ugly/awesome’, and its rarely pulled off. 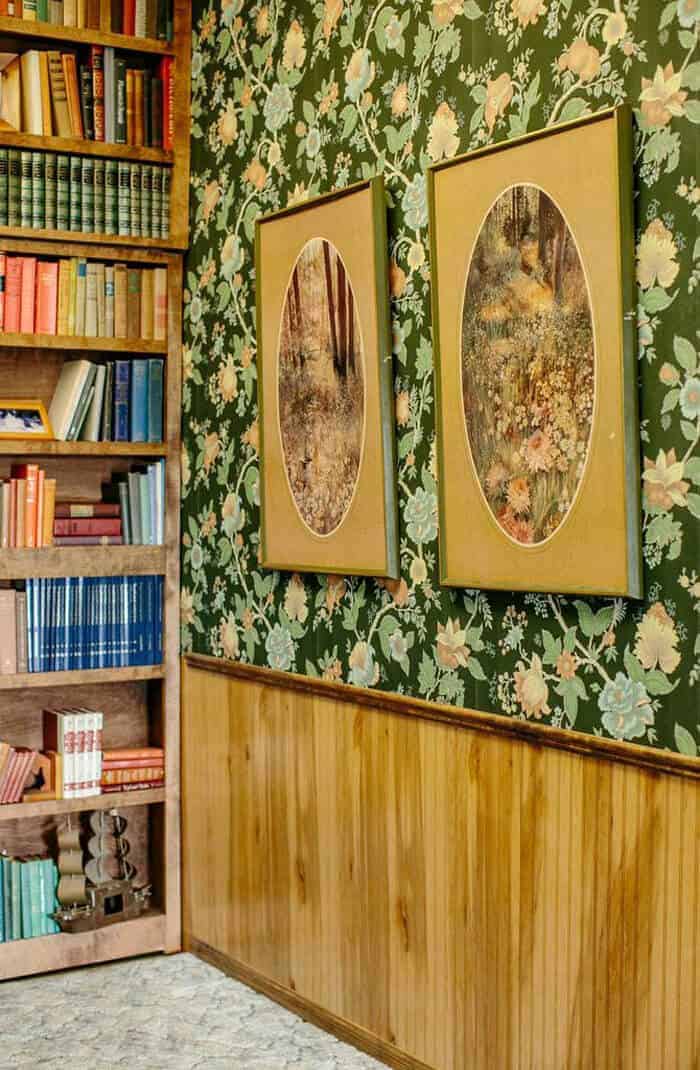 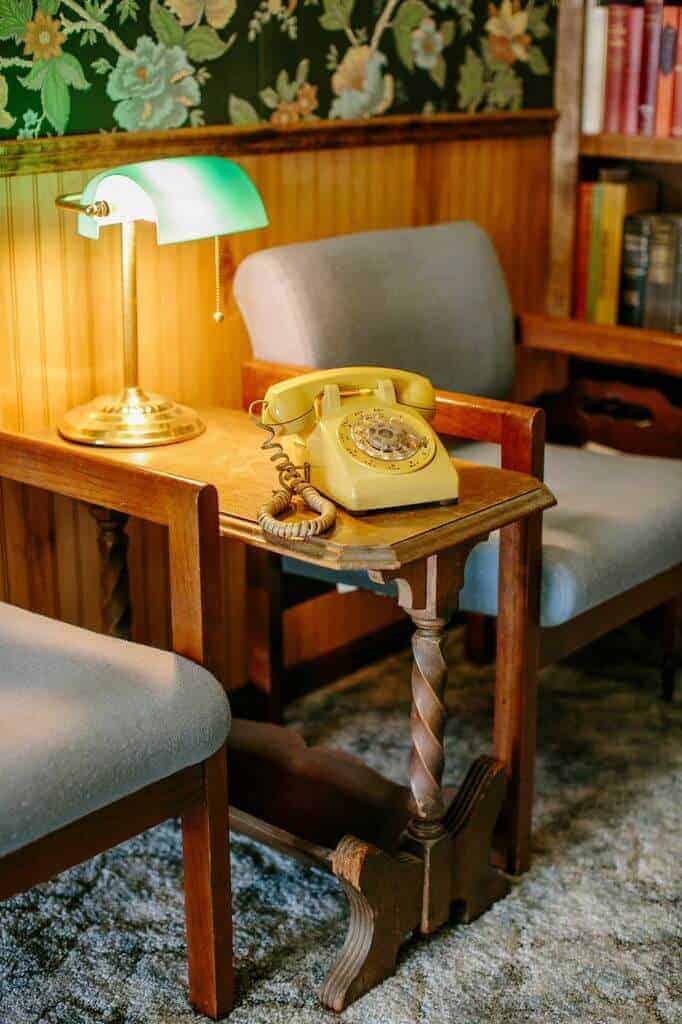 At their opening party they cast/hired an older lady to be their secretary who was constantly on the phone and when you walked in she’d say in a pleasant, yet warning voice, “May, I help you?”. Such a good move, boys.

But y’all are fooled, folks, because that weird room was a false front for a really awesome clean, modern photo studio.

I mean, how fun is that? (I sound like my mom).  I wish I could take credit for designing it, but I can’t. I gave them bits of advise here and there (paint the beams different colors, get your weird wallpaper from Astek and here’s my carpenter friends number), and yes Ginny and I helped style their shelves for the party, but otherwise these five straight dudes, known as Sharkpig, did this themselves. 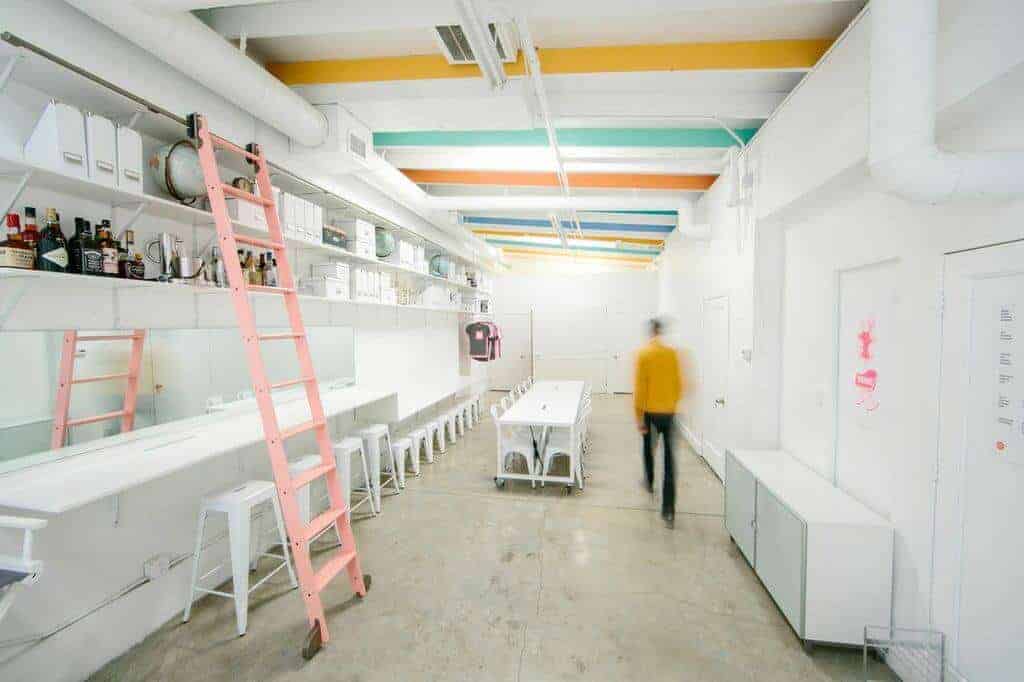 They wanted the shelves for storage … and also to have an excuse to buy a library ladder and have it lacquered pink. You simply can’t be a filmmaker in LA without being on, near or owning a watermelon pink ladder.  It’s a thing. (no its not) 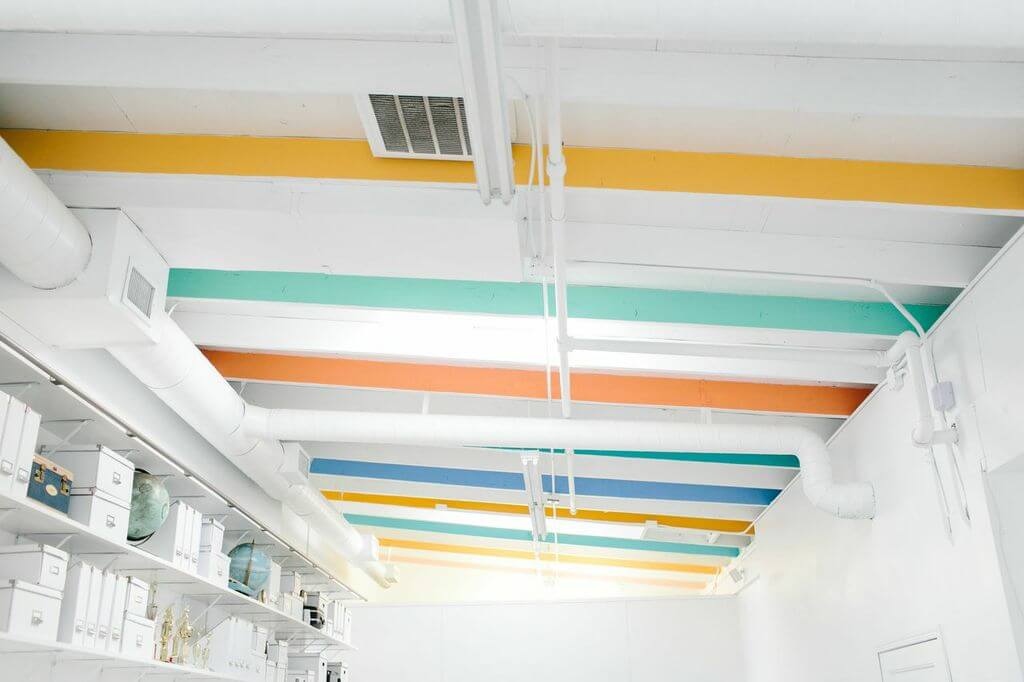 When Brian came to me and told me his idea for  their studio I got so excited that I was dying to help them so I could take credit for their ideas. But I was 8 months pregnant, finishing up The Fig House, moving, and trying to make all my clients happy before the end of the year. But man, now I wish I had blown all those things off (baby included) to be able to take credit for this space. 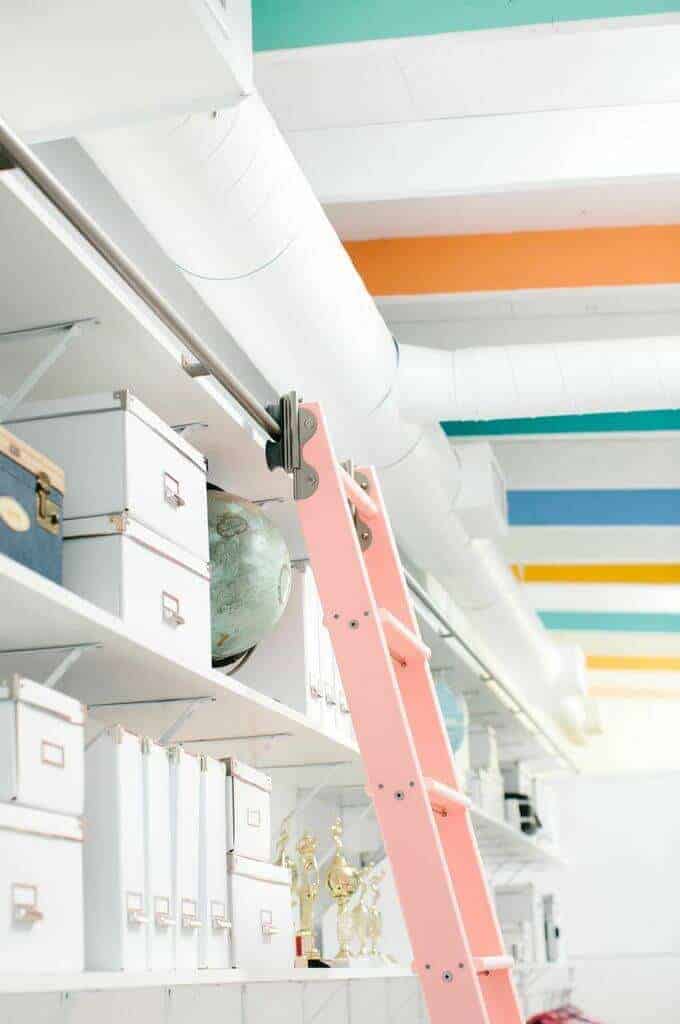 Also, why isn’t my life one big GIF? I’m embarrassed of how still my photos/life are now. 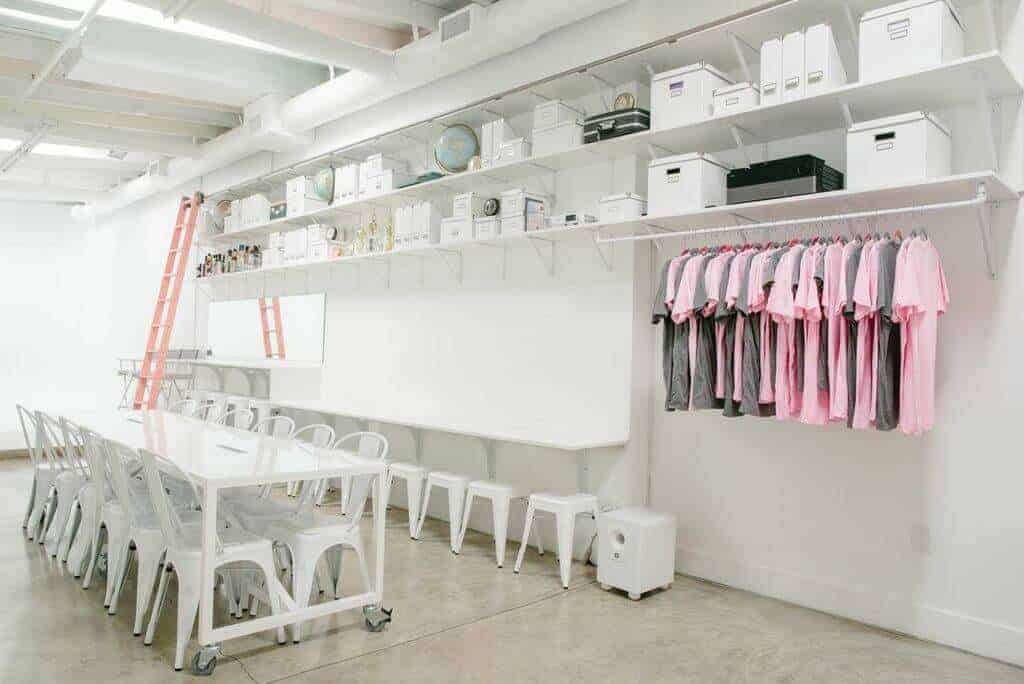 Look at them, just brainstorming away – probably on how they can take over the world with their weird dope false front studios.

I’m a massive fan of collaborative creative companies and someday I hope to have a crew as loyal and creative as these dudes. 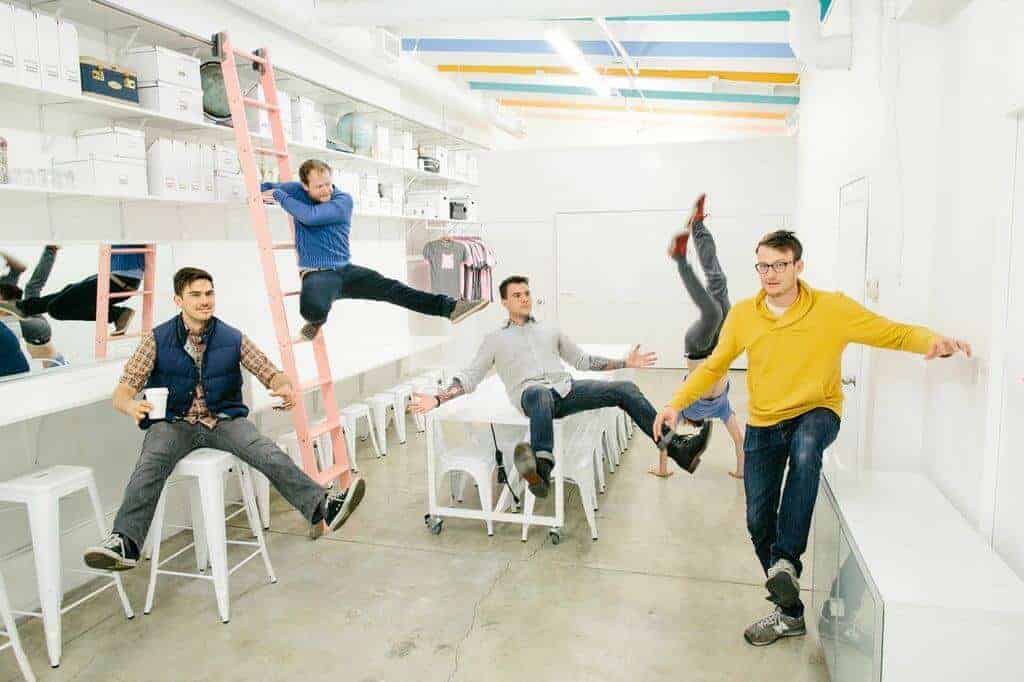 … Only since we’ll most likely be chicks, we won’t be posing like that.

Nice job, boys. You are a weird, talented bunch.

Studio Design: Sharkpig, Most of the construction (including the custom table and ladder) by my friend Jake Scott (a double first-namer), and these great photographs by Jennifer Emerling