When i first met these guys they told me they were ‘Tiki meets vintage Japanese cowboy meets atomic kitsch’ which was partly awesome (at least they didn’t show me pictures from a catalog, i don’t want to name names, but sooo many people want rustic traditional these days that i was starting to get really, i mean, really over it) but it was also a little frightening.  Kitsch isn’t really my thing, and while there is something about vintage Hawaii that I totally love (which is ironic because i actually don’t totally like going to Hawaii very much) i kinda feel like Tiki needs a specific context, and it can be done very badly.  I was super afraid that David wanted me to build a Tiki hut/bar in their dining room.  He kept saying over and over that he wanted me to go over the top, and I’m not particularly good at going over the top.  But what came out of it, i kinda love.  The only part of their style that i nixed was the ‘cowboy’ thing and that is because for the sake of TV i can’t mix 6 different styles, it gets really confusing, so i paired it back a bit.

I wish i had before pictures (computer still being fixed) but here are the afters:

They needed a dining room where they could eat but that could also function as a ‘jam session’ space.  David is super into this old timey music – god he’s going to kill me, i forget what type of music its called – but its that awesome style that sounds like it Mississippi and you can square dance to it (the Appalachians come to mind).

The sectional/booth was custom made by Room Service, and man did they kill it.  I gave them an inspirational pic and dimensions and they turned it around in 2 weeks.  I think it ended up being over $5000, but it was the main piece in the space, so it was worth the splurge.   It was inspired by old diner booths from the 50’s and 60’s, and i chose to do it in hot red vinyl so it would wipe up really easily, be kid friendly and i love the red with the gold and white wallpaper. They both loved the oil cloth in the diagnostic and there is something so playful about the red vinyl that seemed appropriate and a good contrast with the more sophisticated wallpaper. 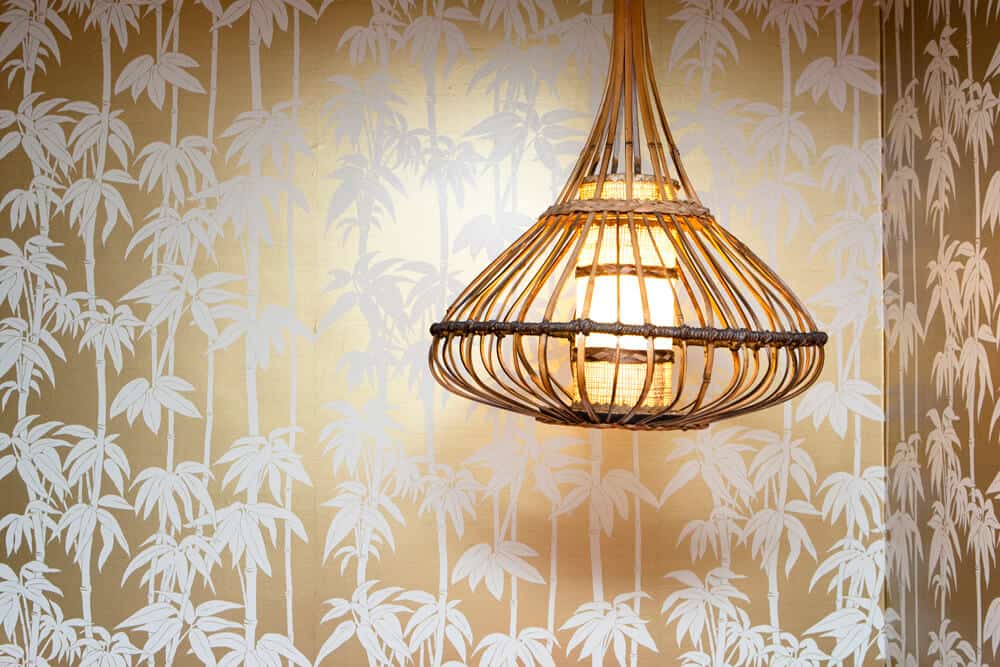 Speaking of wallpaper.  Man, i love this stuff. It is Florence Broadhurst from Australia, and i would honestly use every single one of her papers if i could afford them. They are always feminine, but the color palettes are simple enough that they don’t feel too ornate and overworked.  They are incredibly expensive, but so freaking good that if you feel like splurging, i would recommend it.  You can buy them through Walnut Wallpaper.  It reminds me of an old Hollywood bar from the 60’s, like Tiki tee’s.  And i think that gold and white is kinda my thing.  The gold almost becomes a neutral and while it is a statement, its a lot quieter than most wallpapers. 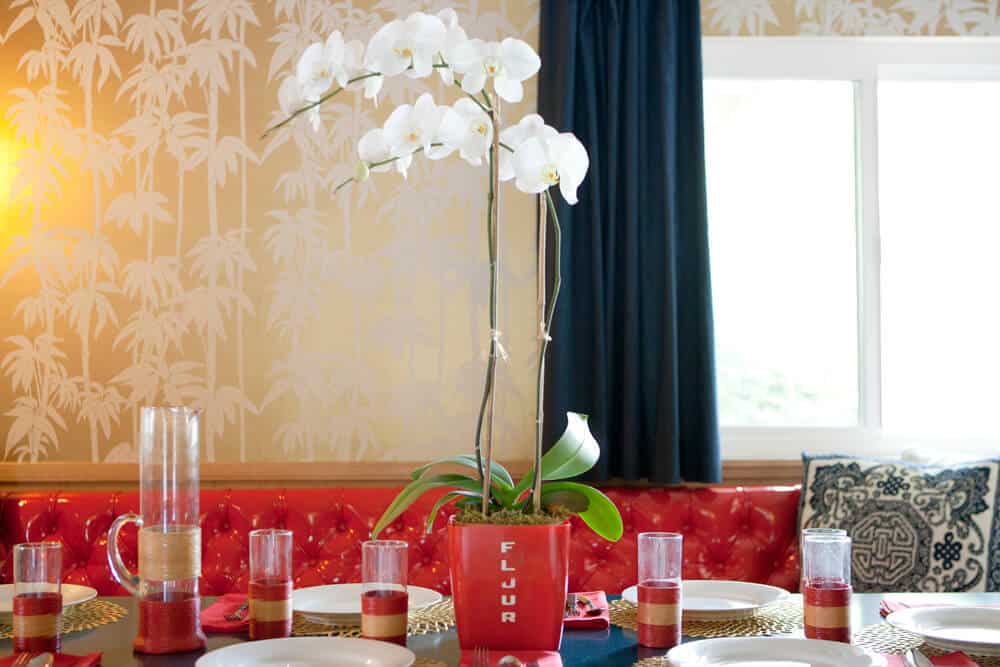 The table was purchased on Craigslist for $100 then lacquered for $200.  The drapery was custom-made from blue canvas. 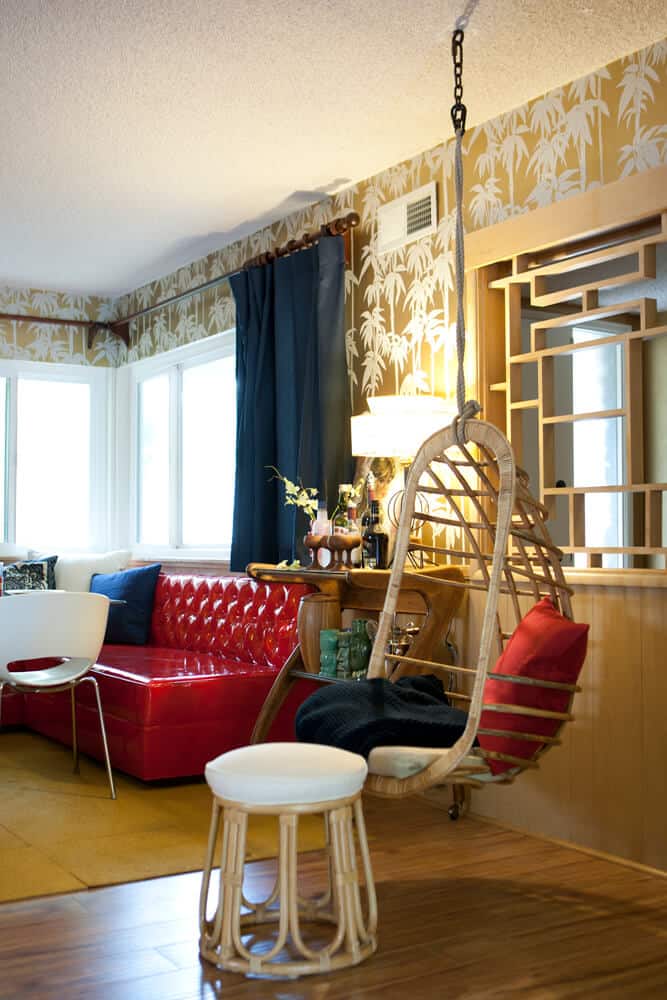 The carpet tiles are of course Flor.  These guys are insanely practical and while i chose a solid for this room, they have a ton of amazing patterns.  And yes, the huge benefit is that if they spill on one and can’t get the stain out, they only have to replace that one, which is $15.

The stools are from the Rose Bowl and we had the tops reupholstered. The hanging chair is from Amazon if you can believe that, $400. 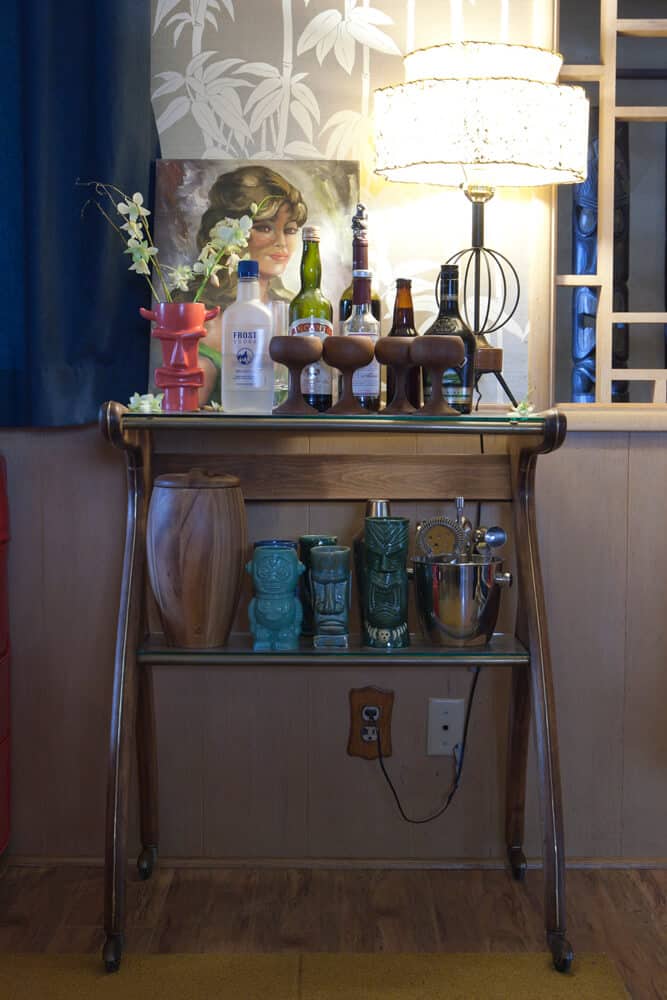 The barcart is from the Rose Bowl, $300, which was a splurge but i love the lines of it.  The owners had all the Tiki cups and atomic lamp, and i just brought in the wooden cups and the painting. 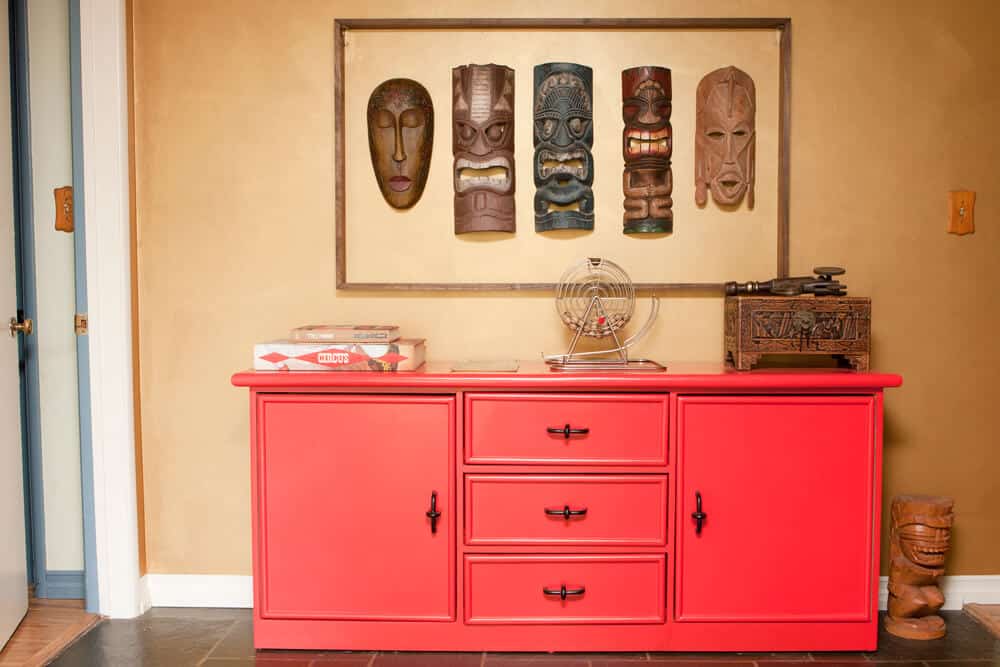 This credenza was a boring gross wood that i got at a thrift store for $80, then had my guy lacquer it red (its actually a darker red then this – this looks more coral) for $200.  The gold paint on the walls is Martha Stewart’s metallic line (the true gold) and its kinda amazing – perfect for a bathroom, hallway or dining room (if it was just on the top half).  I love me some gold walls, yes i do.  The masks were the homeowners, and i grew to love them in this space, they just needed to be paired down a bit. 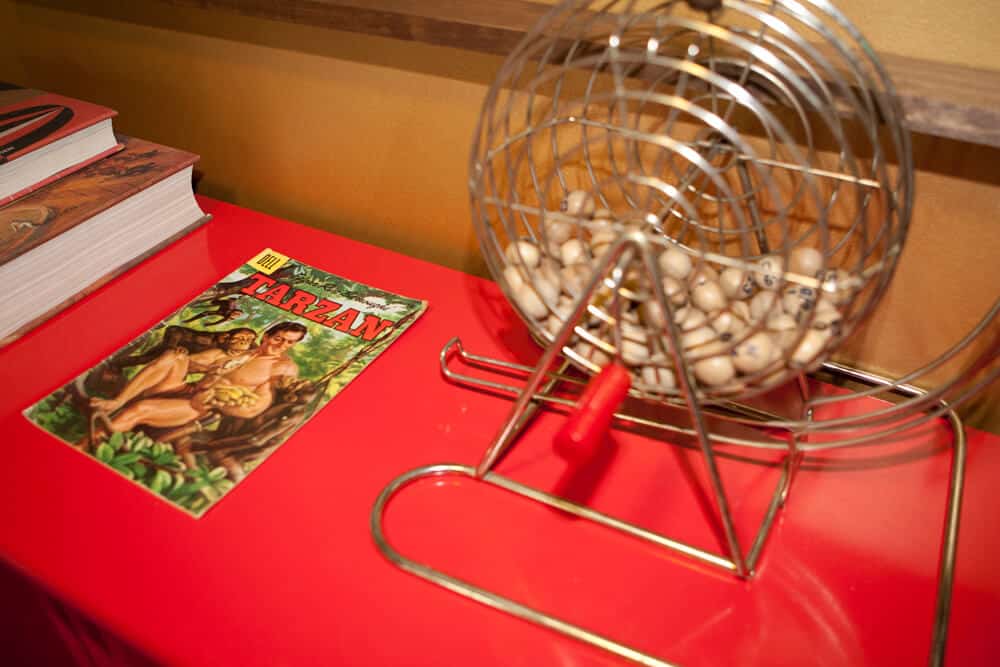 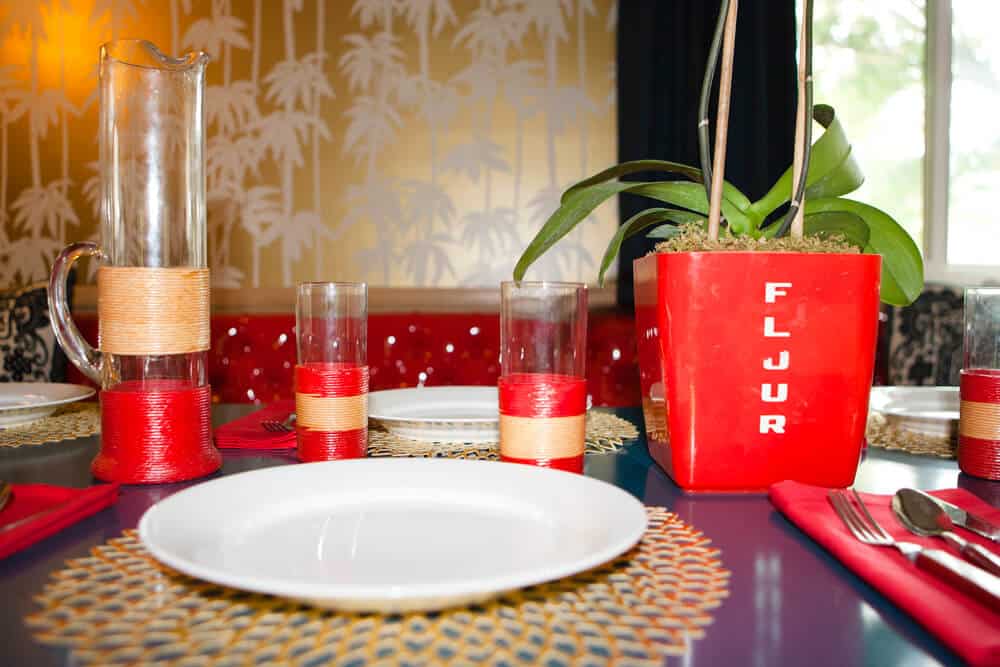 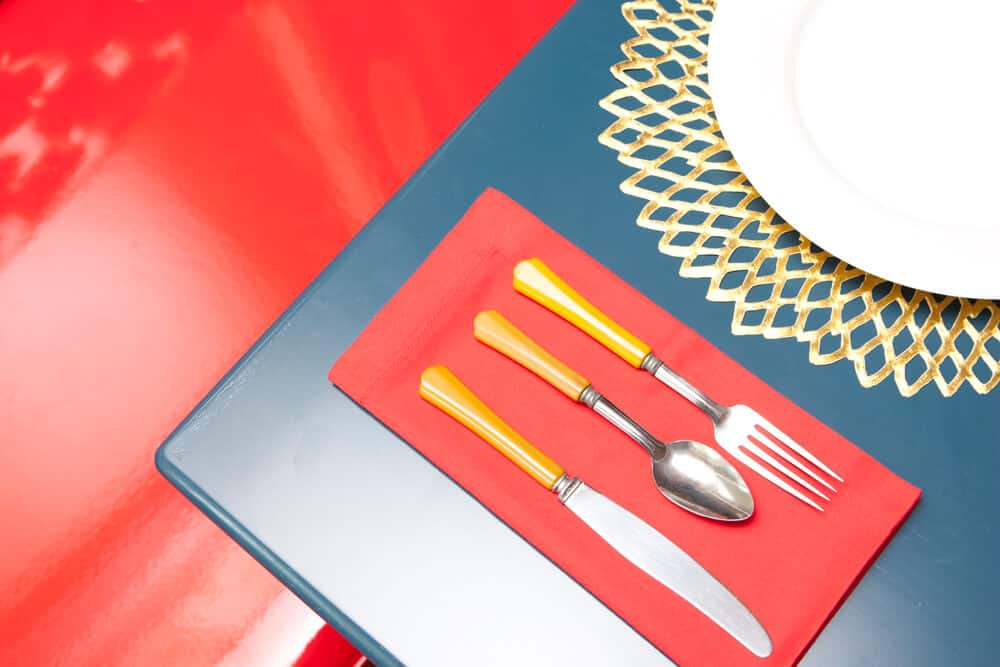 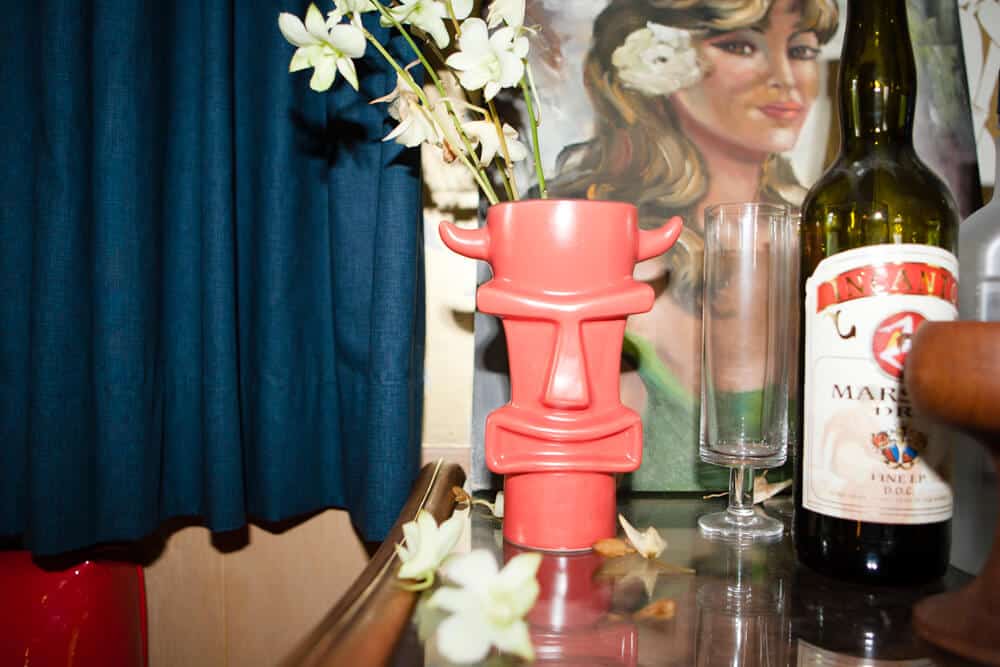 I’m kinda obsessed with that painting of the girl.  It was controversial on set, some thought it was super tacky, but I loved it and so did David. 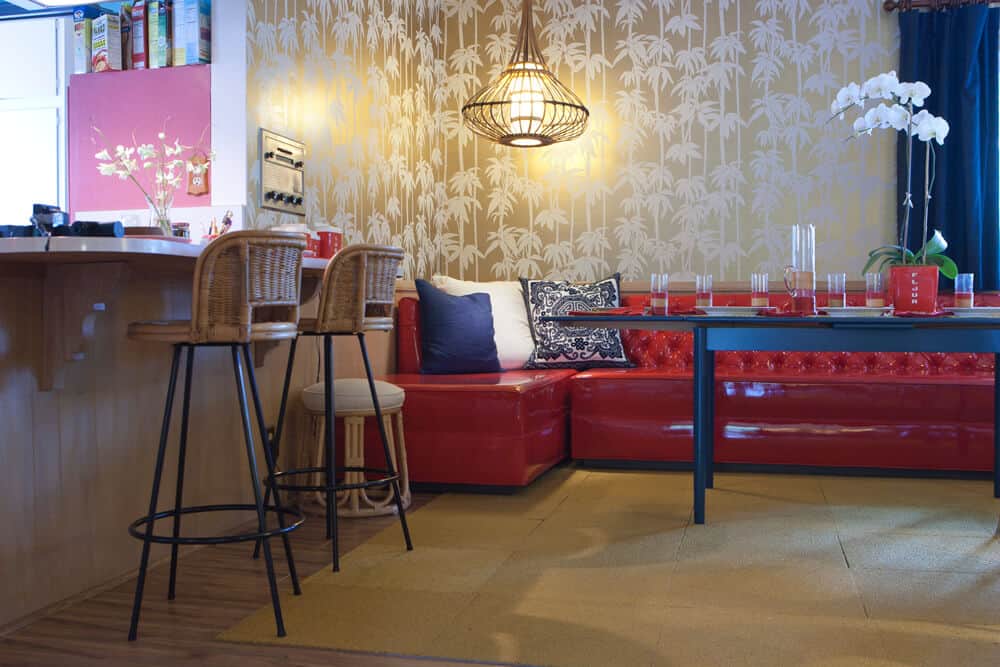 The stools are from the Rose Bowl as well, $50 each, i believe. 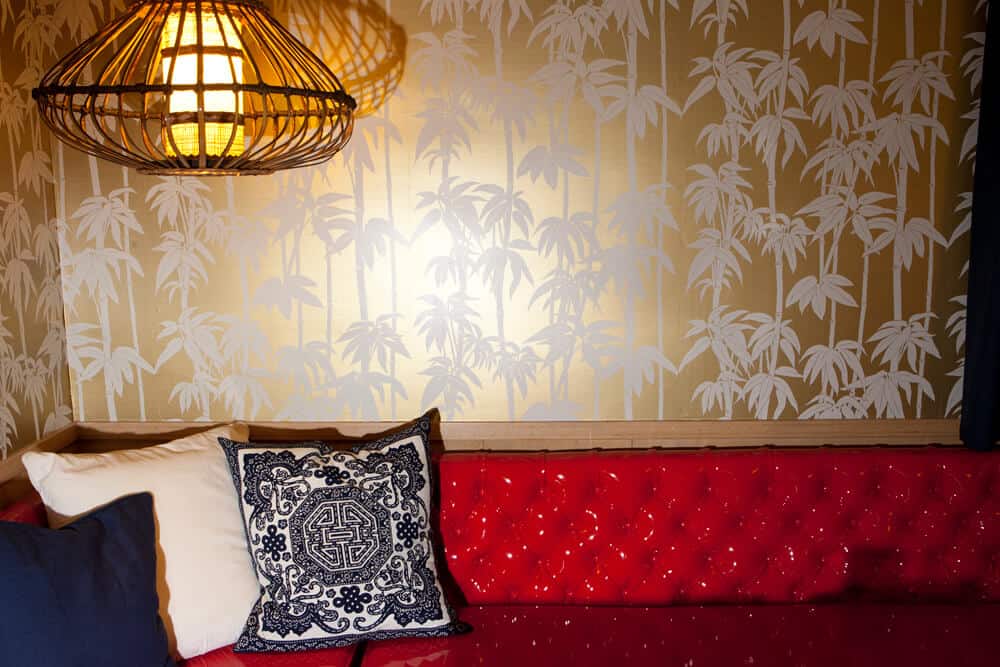 So while ‘Retro Polynesian Kitsch isn’t exactly how i would describe my style, i tried to do exactly what i would do if i had to do it for me, and i’m not gonna lie, i love this space.  It’s a total throw-back, but in a good way and still feels pretty current.

What did you guys think?

And all pretty pics by the talented and handsome Mark Champion. Also his name is Mark Champion, and that’s pretty awesome already.