A while ago a reader, Amy, asked the question, “How do you deal with negative criticism or negative feedback?” It’s such a large one to tackle that I’ve kinda avoided answering it. But the answer has gotten simpler with more and more negative comments from mean people.  The internet is a total free for all and people LOVE to rip people apart behind their computers, so while this advice is specific to my blog, it’s general advice for facebook, email, twitter, or any general unwarranted criticism.

Let’s take a gander at this wonderful comment I received:

“You may as well smear my child’s sh*t and puke all over the walls and it would look better than what you do.”

That’s how I’m picturing him. He’s the worst.

Well, well. What a lucky child to have such a wonderful father setting such a great example for him/her. This was while he was watching last year’s holiday episode that I really enjoyed watching and was proud of … and then I opened my inbox.

Normally, that comment wouldn’t have really affected me too much because this guy is clearly a hateful imbecile, but he was determined to ruin my day and kept writing comment after comment, terrorizing me. Now it’s kinda funny because he’s a doucher toolbag idiot, but at the time it bummed me out — not because I think there is any truth to what he said, but that someone is hateful enough to write that and hope that I would read it and ruin my day.

Then there are the simple negative comments:

“You are a megalomaniac.”

… which hit way more close to home and made me question things a bit. Do I take myself too seriously? Am I self-obsessed? I don’t think so, but do narcissists really think they’re narcissists? Do crazy people know they are crazy? Do sociopaths know they are sociopaths? So while that comment is still hurtful, it’s also kinda influential. It made me look at myself and reevaluate the way that I project myself, because while I truly don’t think that I am a megalomaniac, the fact that two people have commented this way means that they are percieving me in a way that I really don’t want to be perceived.

But what do you do? Do you engage the negativity or not? My answer, as unsatisfing as it is, is “Not … most of the time.” It only enflames and excites them, and that is exactly what they want. Remember, they are often just haters and they love to hate and can’t wait to hate more. At first I did respond to negative comments, but then I found myself responding more to them than to all the positive comments and that’s totally effed up. I’ve tried shaming them, imploring them to ask themselves why they hate, and even defending myself, but it doesn’t help.

The two responses I wrote that did seem to work and gave me a little bit of satisfaction were:

“Dear so and so, You may be right. Emily.” Which is TOTALLY aggravating to them because that’s not what they want to hear.

“Wow.”  Which they don’t know how to respond to and it normally just shuts them up.

Do you delete negative comments (blog or facebook)? This is an interesting question and I don’t know how I feel about it. Negativity breeds more negativity so one would think to delete them so it doesn’t create more. But ultimately, I like my blog to be totally democratic and it seems weird to delete something that someone feels, because it’s their right to feel that way. And often it enflames other commenters and an interesting battle or dialogue normally ensues.  So in general, I don’t delete unless it’s something negative about someone else that is just cruel. There have been negative comments about clients’ houses or style and those I delete because I don’t want my client to read them and get hurt, especially if it’s something they love. You can say anything about me, my looks, style, and personality. I have thick skin at this point, but when people start getting cruel about other people, then that goes way across the line.

Ultimately, the most depressing thing about this whole subject is that there are sooooo many people out there that just love to sit behind their tiny little computers with their tiny little fingers and other little appendages and hate and hate and hate. I get it when it comes to religion and politics and things that effect many peoples lives, but I’m a decorator. I love making flower arrangements and fluffling pillows. Sure, I think that me and my style are probably annoying to a certain brand of person and that is totally fine; I’m annoyed at myself at times, but the hateful comments are just so strange to me.

Ultimately they are clearly more upset with themselves than others and just projecting that hate outward, and you just have to be grateful that you aren’t filled with negativity.  There was that phrase, ‘Hurt people, hurt people’, i love – the concisity is just perfect.

BUT sometimes they are telling … when I did the “15 do’s and don’ts to finding and keeping an internship/assistant post” there were 102 comments and like 80 of them were positive and supportive, but the ones that were negative really made me think. There were enough of them that said the same thing that clearly there was some truth in it. In that case, they were totally warranted and provoked an interesting diologue. So while they were hurtful, they were also not necessarily wrong and they were coming from a genuine place, not of hate but of personal experience. I did engage in the comments and even wrote a few back and forth emails with negative commenters to try to understand each other better. I still feel the same way and stand behind that post, but clearly I wasn’t projecting myself how I wanted to and for that I was sorry.

But all the “you suck, ” “your voice is annoying, ” “you should get invisilign to sponsor you, ” “you just put garbage in a room, ” “my three-year-old could design a room better than you, ” etc. don’t really affect me too much anymore because I have a secret weapon and his name is Bill Cosby. Keep reading.

My advice to anyone that has to deal with negativity in any way (facebook, blogs, or general anonymous haters) is to remind yourself of this quote from the wise Bill Cosby: 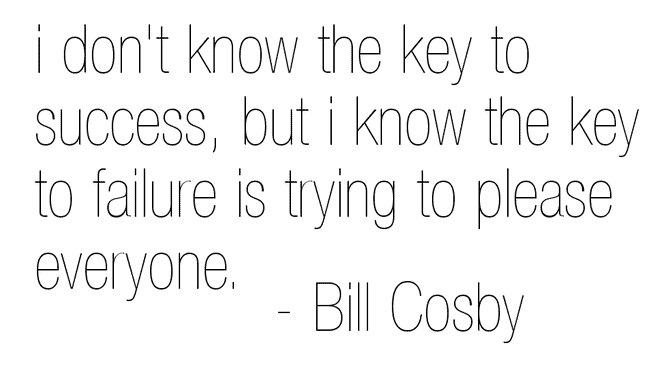 Indeed. I’m certainly not an inspirational quote kinda girl, but I love this so much and this quote has literally helped me 100 times (when I’ve been bummed about mean people leaving negative comments).  I actually think to myself, “Good, because that means that I’m actually influencing someone emotionally.”  Having a point of view, being slightly controversial, and having a defined sense of self and style can be polarizing (although it’s not like I’m Bethenny Frankel or Brandi from RHOBH), but it’s also what sets you apart from the people that don’t have any of these things. It’s also what gets people to relate to you and love you. Ultimately, you can only be you and it’s just so much easier being you than trying to please everyone.

So thanks, Bill. I’ve loved you forever, but it wasn’t until two years ago that I read this quote and you really became one of my idols.

And hey, all those haters out there, just stop. It’s cowardly and cruel.

5 Comments
Oldest
Newest Most Voted
Inline Feedbacks
View all comments
Our sites use cookies to improve your experience. Learn more