When we first saw the house there was this bonus room underneath that was full of what seemed to be my nightmares, really; old exercise equipment, tax returns from 1988 … a weird S and M room, etc. The room itself was never actually finished – no proper flooring was ever laid and the walls had huge gaps between the drywall. It was 450 square feet that had only been used for storage and some other weird secret acts. 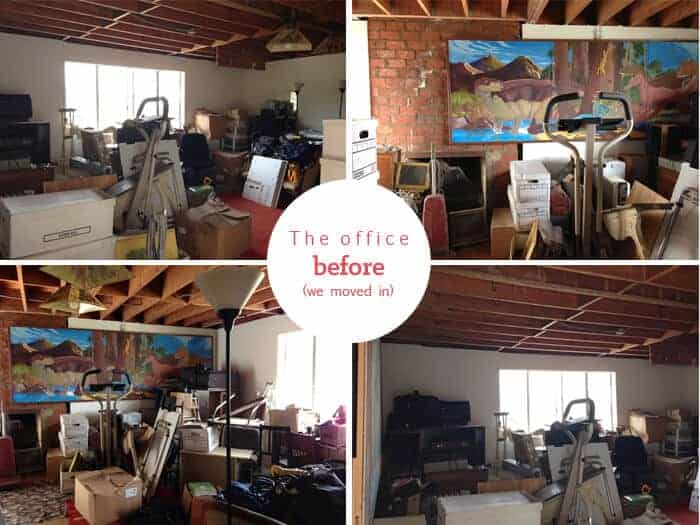 I know. Terrifying. But I was psyched. It meant that I would potentially have a studio that could be attached to the house, but separate. A space where I could have clients come and meet me without having them come into my house.

But it’s really just a box with a window which does not scare me at all.  So after they moved out it looked like this and it was way easier to see the potential. I was nearly excited. 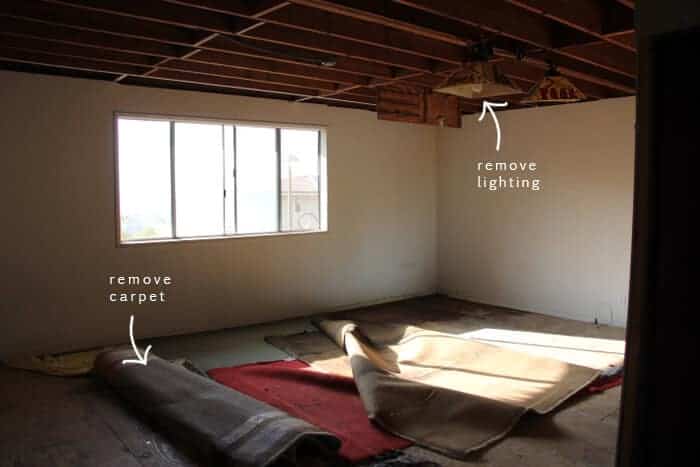 Instead of ever doing the flooring the last 50 years the previous homeowners decided to just keep piling and piling carpets on top of each other. As a lover of most things vintage I will tell you that I really didn’t appreciate these vintage carpets. They were full of mould and loads of bugs and mystery liquids. It was disgusting. But besides that, it was all a simple fix.

This is to be our studio so I can work at home the next few years while raising little man. I wanted it to be a big white simple box that I can trick out, which it was, but the ceiling was too heavy so it needed to get painted out. 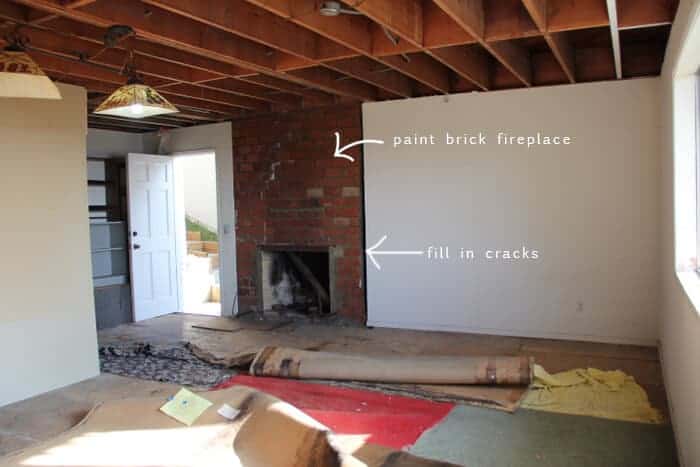 There was a very mysterious room that had padding on the inside that I’m sure they claimed was for music, but it was VERY tiny so it seemed to me that other naughty things had gone on in there. Especially since we found vintage Polaroids of hookers in the walls. So there’s that … 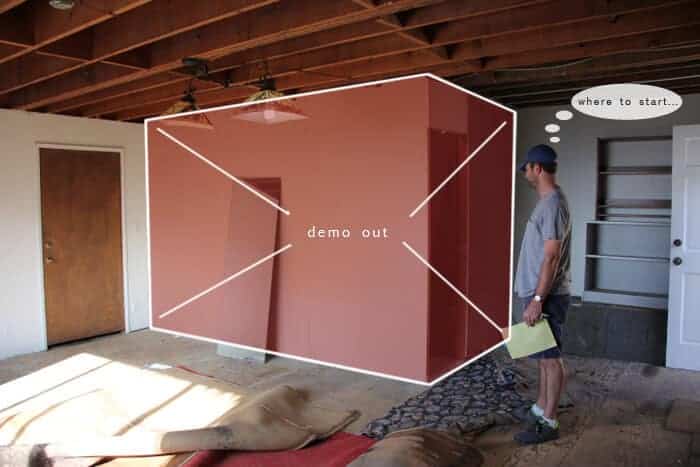 I mean, what a creepy room. I love a house with ‘a story’ although I don’t really want to know what this story was. 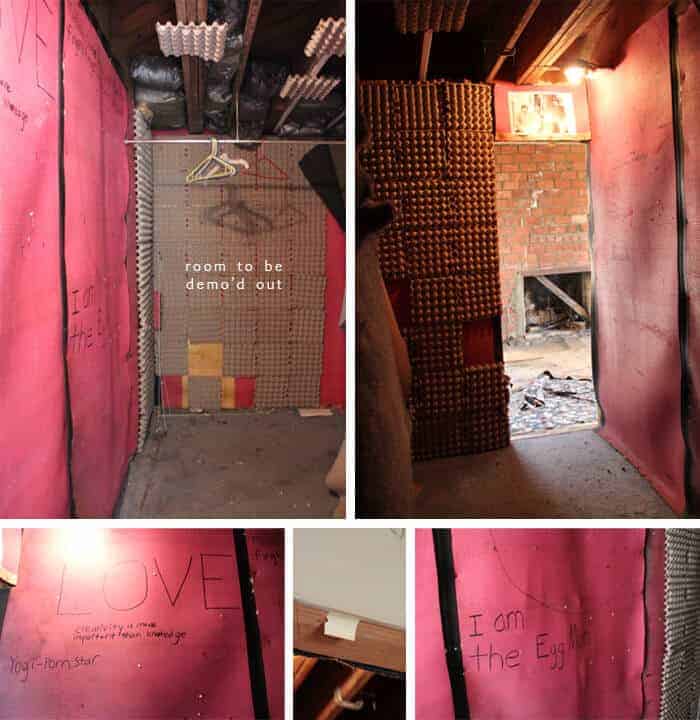 Sure, it could be for ‘music recording’, and maybe its all very innocent. Either way its gotta go. 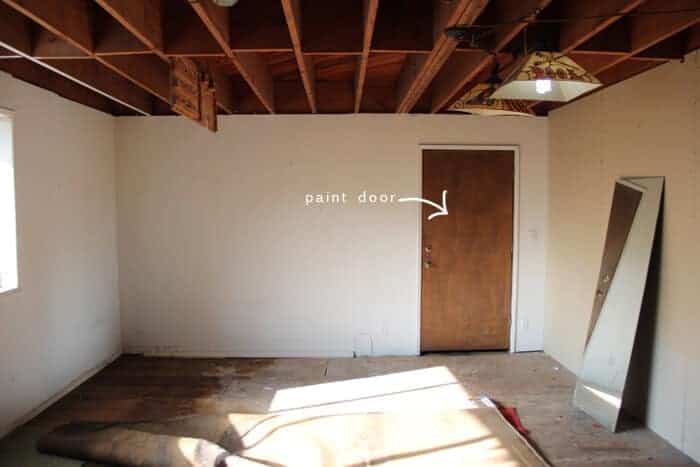 Outside that soon to be white door is the mountain that the house is built into, basically. But there is a decent amount of space that we can eventually utilize – either as storage or most likely a bathroom. That way when we have meetings down here with clients they’ll never need to go upstairs into the house – look at me trying to set boundaries. 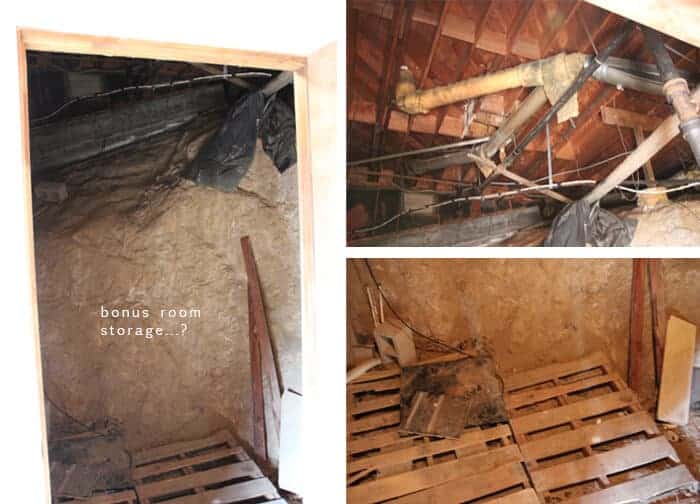 It’s hard to tell, but it’s probably 80 square feet to play with. Also there is a mountain right there and you can see all the innards of the house. So weird. If we stay here long enough for Charlie to turn 8 or 9, he is going to have so much fun down here caving and building forts.

So, Brian and our muscular friend, Mike, decided to do the demo-ing themselves and take out the S and M room. You, too, can hire them to demo if you enjoy unnecessary grunting and general displays of machismo. 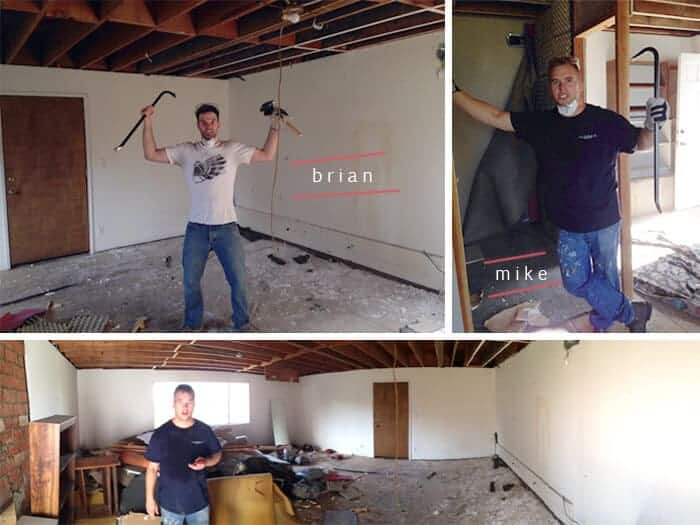 I tasked brian with making a video of the demo so he and Mike put together this really informative video of the proper steps you need to demo out these walls. Also, Brian you are fired from ever  making videos.  (And if I get more views on this video than any of my videos that I spend days and hundreds (or  thousands) of dollars producing then I will cut myself)


Brian is the ‘narrator’ in that video. I hope you learned a lot!

After the demo was complete I had two painters quote to paint the walls and ceiling. My good painter quoted $1200 for including patching, but no skim coating this time – they hadn’t sprayed it with that gross orange peel. My ‘this guy might be good so lets test him out’ painter quoted $600, I believe. It seemed to be quite a difference and since we had just spent SOOOO much money upstairs painting and this wasn’t a super important part of the house I figured saving $600 was in order. Besides how hard could it be to paint it out white? 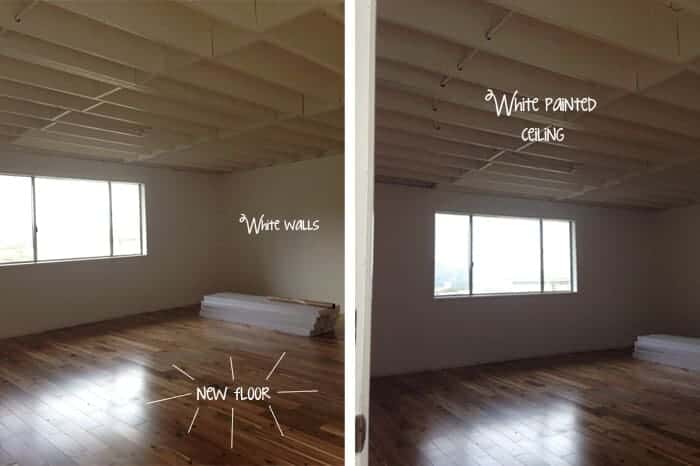 Well, the $600 dude did an ok job but I’m so glad I didn’t hire him to do my entire house. He clearly didn’t use the right primer to cover over the ceiling so it’s still kinda yellow-ish. I had him do one more coat than he wanted to do and even after that its kinda yellow. He said it was because of the color of the stain, yadda yadda, but ultimately if you use oil based primer and enough coats then it can be super white. My ceilings upstairs are SUPER white, so I was just so glad that this guy didn’t get that bid.

We put down new flooring, (acacia from BuildDirect) and it was done. We moved in a week before Charlie was born which was around the holidays so this was basically the last room to be dealt with. Here’s how it looked 2 weeks ago: 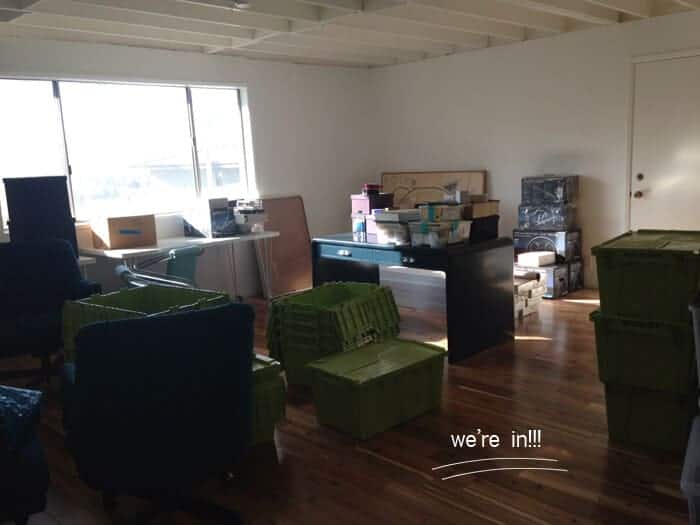 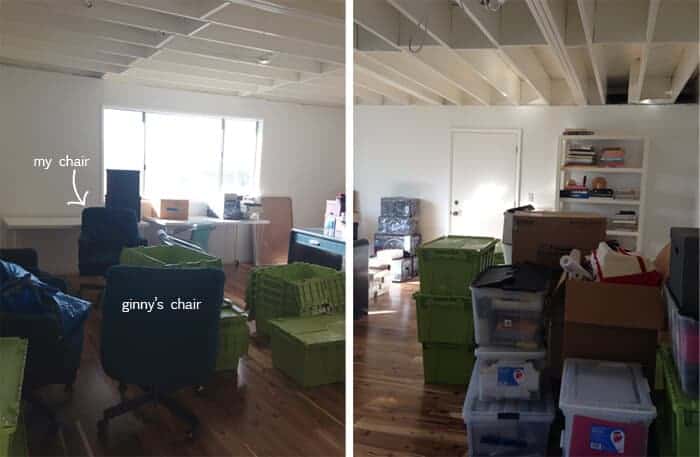 Now we’ve unpacked (kinda) and we are working out of there (sometimes) but it’s certainly not ready to go. Having everything be white immediately helps us figure out what to do. We have a blank canvas that needs to be filled with 100% function, but obviously in a very stylish way.  And I’d like to not spend a fortune down here, but at the same time I want to add value to the house. 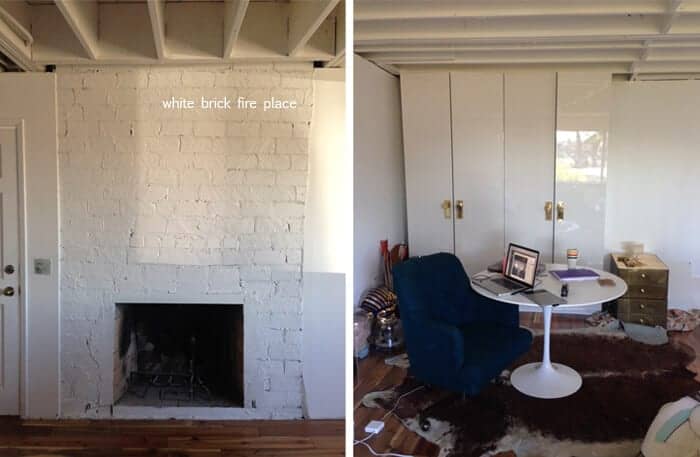 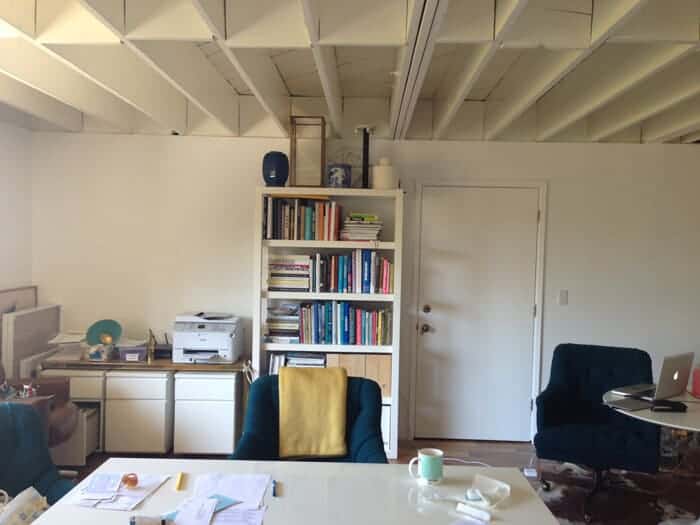 The wall where the printer is will most likely be turned into an exit (glass door?) because the area right on the other side has a landing which could be a little outdoor deck/terrace which just sounds lovely. Please note how I styled the pacifier on the desk.  I should be embarrassed by these photos, but luckily I really have no shame. Just know that we are plugging along on the design and things are changing rapidly. 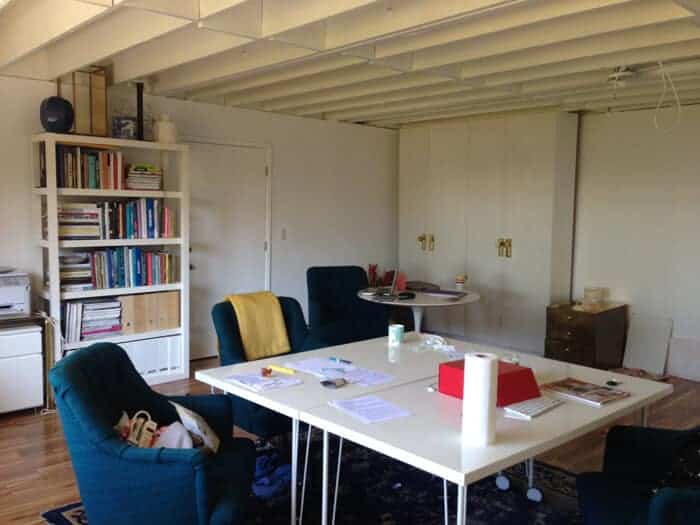 Here are the needs:

1. A MASSIVE rug because these vintage chairs, which are on castors, are not good for our beautiful flooring – they are kinda denting it (which is why there is that clearly too small rug in the middle of the room).

2. A wall of built-in storage – maybe with sliding panels in front of them with mood board/white board on the panels.

4. A huge conference table for us to spread out on, shoot on, have meetings at, etc.

5. A kitchen area for snacks and lunches.

6. A lounge area, which probably isn’t necessary but seems like an inviting thing to have.

7. A bathroom – with a shower in it so this could be guest quarters someday as well.

8. At least one big wall that can be shot on  (left reasonably empty).

Plus one million other things, I’m sure, but that’s where we are starting. I want it to feel clean, functional and comfortable first and foremost. This space will get destroyed, trust me, with bags of props, tools, flower stems, piles of hoarded furniture, etc, so I want to keep the foundation of the room clean and quiet (like our living room) because I’m just not those two things 🙂

Well, what do you think? Can you see the potential or are you terrified for us?

(P.S. here’s the first office I did in our last house that was for Brian, then our last office in the old house … man this is going to SUCH an upgrade).