When we were shopping for a house we were looking for the right combo of  something that can be transformed and designed (not recently flipped) but doesn’t need so much work that we’d be living in dust for a year with a baby. One of the reasons that we bought this house was because it was a project without being a total demo reno. We only needed to paint the walls and redo the flooring in order to live here which was obviously convenient since I gave birth 5 days later (yes i mentioned the birth of my child and yes, i’m ok with it:)). Walls didn’t need to be moved, and the kitchen, while not awesome, was still pretty good. Have a look see: 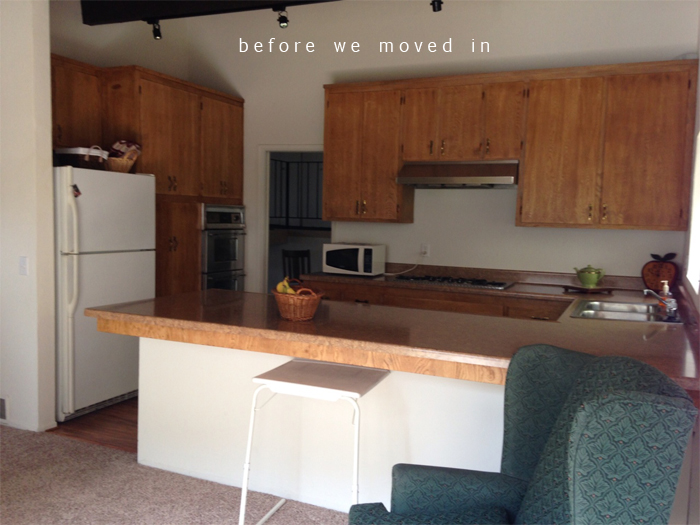 The layout was great – it was open to the family room so I can watch my stories while I pretend to cook. Plus the cabinets are actually kinda pretty – its a nice wood grain that looks/feels really dry, but just needs a refinish – possibly even just a rub down with some oil. They have a really simple flat front that I’m absolutely on board with.

I’m sitting right there on that counter writing and i’m not bummed at all. Sure, it needs to be properly designed and absolutely updated, but I really like some elements of it. At least it wasn’t a ‘2007 that looked like a 1996 redo’ in our rental house (sorry about the broken pics in that post – somehow when i switched platforms that happened and now i’m too busy to fix, but you can still see what our old kitchen looked like and this kitchen looks like an angels pinky compared to that one.)

So here’s what we wanted to do to it: 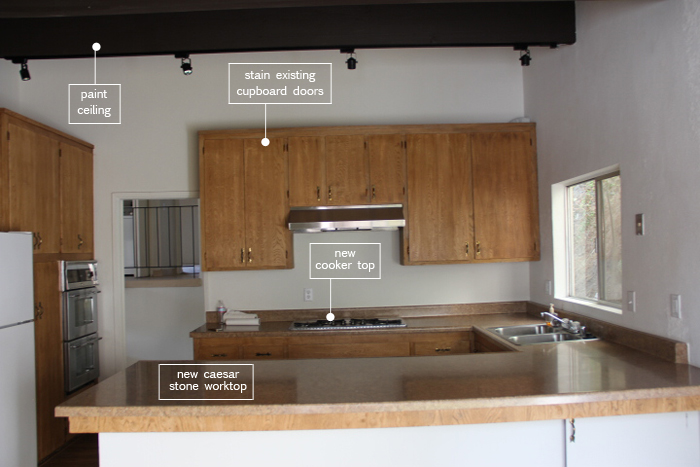 We have already skim coated and painted the walls and ceiling as you can see in the living room and bedroom posts. So that is dunzo. But now we need to figure out how to make this way more functional and attractive. Right now two of the four burners work on that cooktop and neither very well. Luckily every recipe I make requires less than two burners – exactly zero burners to be precise as I don’t cook. So that still works with our “non-meal” plan. 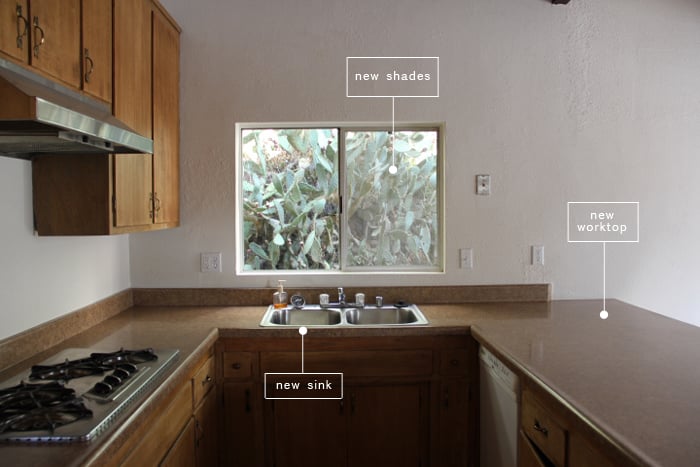 The sink is approximately 2 inches deep, which is great to wash around 1 plate at a time; it must be replaced, obviously. And the worktop is a weird formica. I will say one thing about formica – this stuff really does hold up. It is from the 60’s but totally in perfect condition. If only my heart and taste level thought it was in perfect condition then I could just leave it and be done. But sadly the brown faux stone that feels like plastic is fooling no one. Beat it, poser. 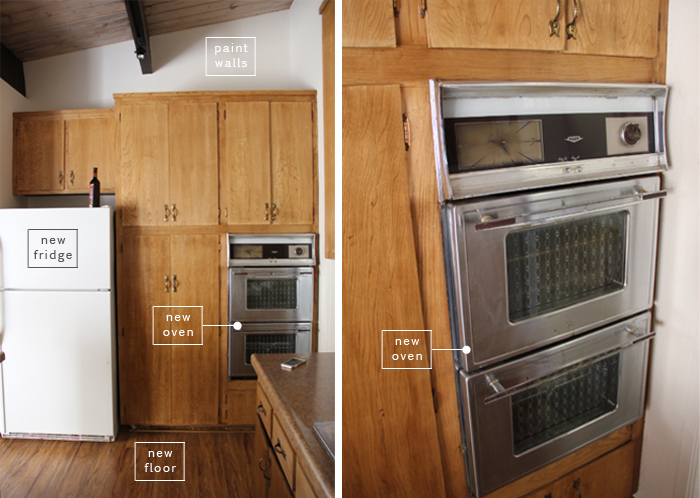 That oven is shockingly old – literally and figuratively. It shocked my friend Scott so bad that he was buzzing still the next day although he does fancy himself some dramatics. That should be one of the first things to go, but we aren’t totally sure what to do with it; do we put in another small oven or do we put in an oven/stove situation and turn that into storage? If we turn it into storage then do we have to match the existing cabinetry? Do we create open storage? Does Charlie destroy anything in new said open storage? Probably. 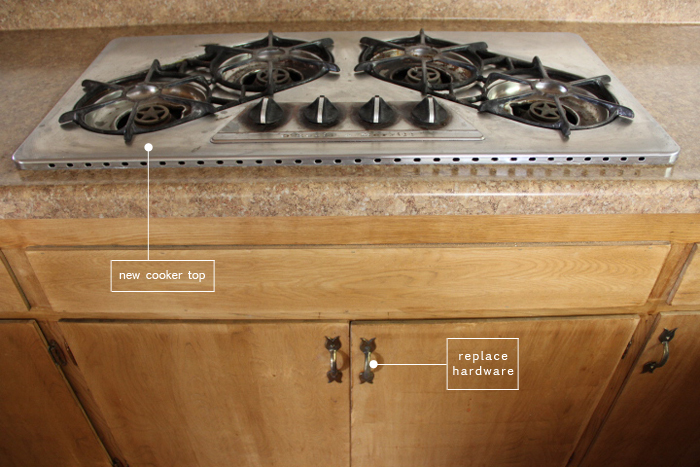 The hardware is HID(eous), but easily replaceable. I’m thinking something simple and brass – shocking (like the oven) I know.

P.S. Ginny, who is british (someone’s got to sound professional around here), does the graphics/copy on these posts so sometimes you might notice ‘colour’ instead of ‘color’ and I think in this case ‘cooker top’ instead of ‘cook top’. Either that or she just likes saying ‘cooker top’ which I will now find adorable and also make fun of her for. Unless I’m wrong (easily) and its actually not cooktop, but cooker top. I could probably just google that, but i’m rushing as it took us THREE hours to put screaming sir charles to bed so i’m deliriously writing this and can’t digress from my digression long enough to google what that stove thing is actually called.

I’m not totally sure what direction I want to go in. I know that I want it to feel new, fresh, modern, appropriate to 1964 but more colorful and fun with some organic elements: 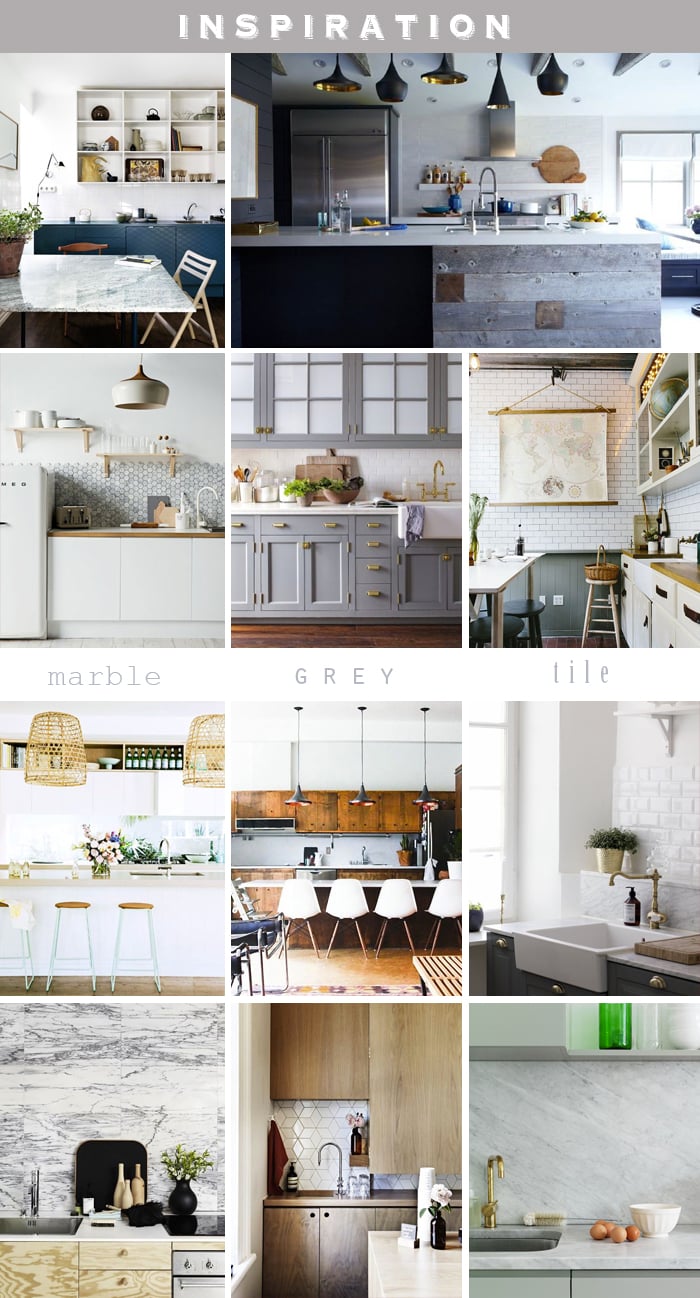 And brass. Duh. Wood, white, brass and some blue. Its like the Gwinnie and Chris martin news – SHOCKING to no one, yet surprising to hear. I’m really shaking things up now, I know. But since the house has an open floor plan and I have very specific loves, I want it to feel really cohesive and pulled together, so one of the ways i’m doing that is through a consistent color palette so that each room really flows into another.

But also, now that i’m staring at that inspiration board none of those are quite weird/interesting enough – I still want it to feel edgy and weird so i’m looking for a tile backsplash that really does that – something appropriate to 1964 but nothing too kitchy or retro. Maybe handmade? Maybe I hand make it? Also all those inspiration pics look like they probably cost a fortune and we are on a budget for this job – I don’t want to scimp (is it scrimp? skimp?) but i’m not splurging too hard here as mama wants to put some built-ins in her living room. Also mama should never call herself ‘mama’ again. Maybe it was funny before ‘mama’ became a ‘mama’ but now its just as if she is speaking in the third person … to herself. Bates Motel type of creepiness.

Anyway, that is what is happening up there and we’ll have an update  (we’ve added a roman shade!) – very soon.