Alright folks, maybe you are following along on house redo and maybe you aren’t. If you aren’t then you are undoubtedly missing out on some totally undramatic progress (or lack thereof) that i’ve made (or haven’t made) – check out The Kitchen, Master Bedroom, Living Room, Nursery, Studio and Deck, and general house design inspiration.

It’s just been REALLY hard to prioritize my own projects when I’ve been so busy on others (that pay) plus there is this fair-skinned, blue-eyed creature staring at me, smiling, cooing and generally begging me to cuddle him that is very distracting when I do have a down moment. So the guest room has remained TOTALLY neglected. I guess it’s better than neglecting that baby. But good news: Domino magazine is shooting my house in June for their September issue. The pressure is on and thank god because otherwise this place would never get finished.

Here’s what it looked like when we moved in:

The carpet was a beautiful shade of ‘cat pee’ which came with its own accompanying matching scent. The walls had a thick coat of spray plaster orange peel that reminded me of a fictional disease (hopefully). These pictures don’t really sell how bad it is, but that chunky, flaky, cracked plaster was ruining my life. 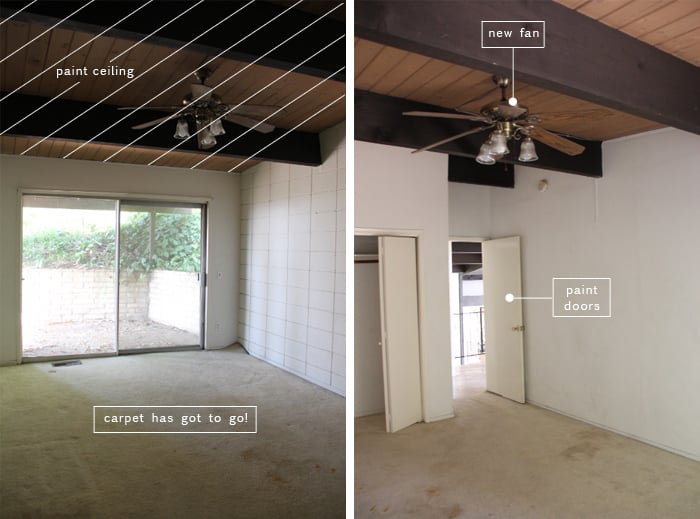 The ceiling needed to be white and that fan needs to be updated. As much as I want to get an awesome modern chandelier or pendant, we need a fan because we live on the hill in Glendale which is like 90 degrees on a bad day. When you open all the windows and put on the fans its lovely, but sadly those fans have become our best friends (plus Charlie loves staring at them). 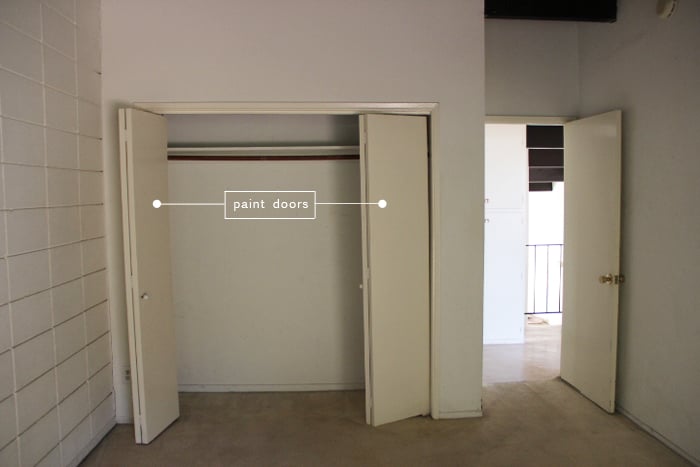 … And then the sad sad closet shot full of broken dreams and scattered memories. You can do better, closet, you can. It’s amazing how when I saw this house and this room I was like ‘YES!! THIS IS IT!!!’. I still love this house sooo much but its funny looking at these before photos now.

So we did all the major fixes before we moved in – the walls, carpet and painting. But when you move in, especially if you are a guest room, you know that you are going to get all the left over furniture. And leftover furniture it did get. 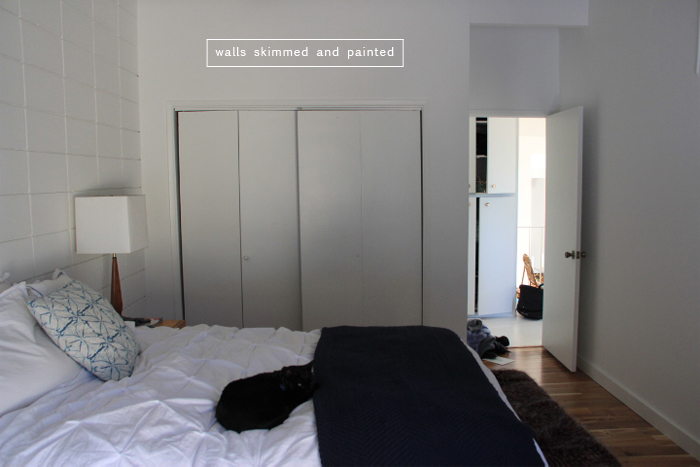 Here’s how it looked when we first moved in. It wouldn’t be a crime to stay here, certainly, but you know, since I’m a designer it definitely feels a bit criminal to show you. Luckily I have no sense of privacy and have no personal filter. 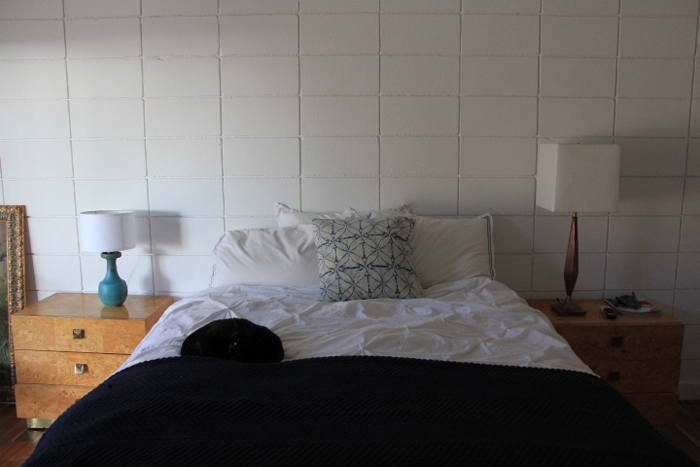 The night stands from our old bedroom are in here which I LOVE but not sure if they work with the flooring. Those lamps are clearly not best friends and the bedding is all the left over from the master bedroom. Nothing is awesome, but nobody is going to die if they sleep here. 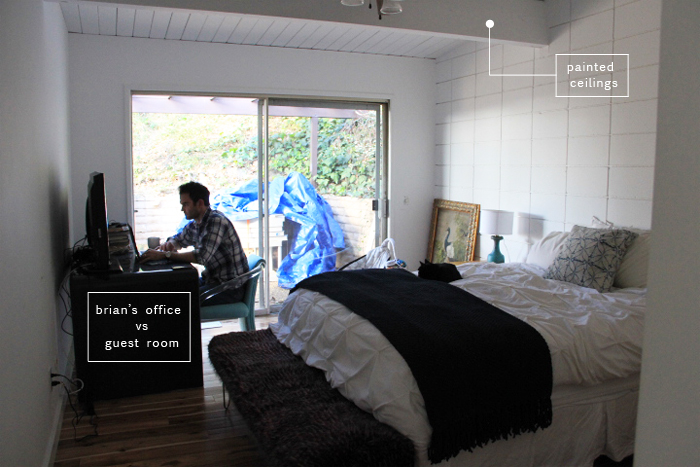 Brian is a writer/real estate agent so he needs an office and was working in here for a while but he’s less into it now. Understandably. But we will probably keep a desk there for him when he wants privacy and for guests if they are feeling studious.

And then a couple of weeks ago we took new photos (thanks, Tessa) that shows you where we are at: 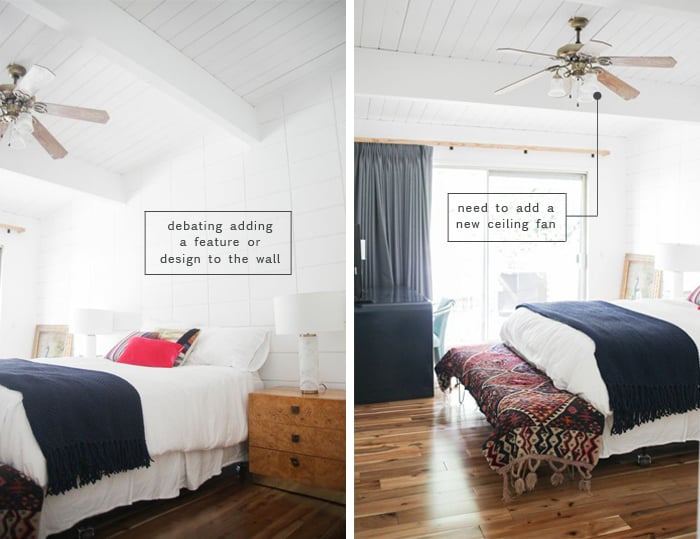 I mean, really nothing has changed except we have matching lamps, window treatments and just slightly better bedding. We still need to do a big old awesome feature wall – something with that weird brick retaining wall … please comment with any ideas. 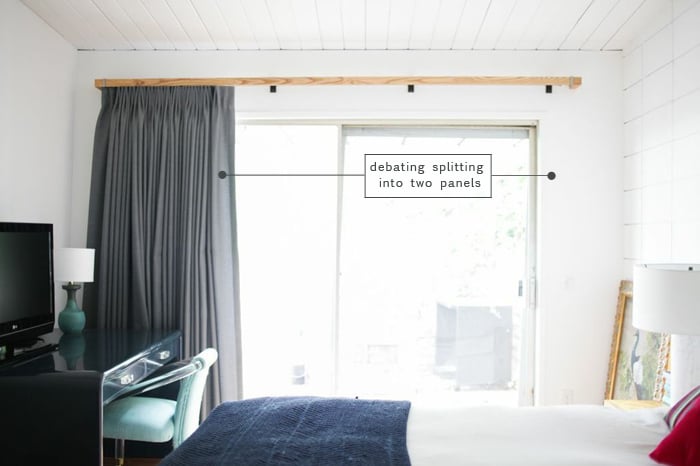 You guys, I seriously need your help on this one. I got these BEAUTIFUL curtains (and awesome curtain rod) from Decorview. We chose the linen and the rod together and then 6 weeks later were installed. When they finished installing everything I was pretty confused and asked where the other panel is. They told me that traditionally with sliding glass doors they make one huge panel that slides from the opposite side of the entrance. My initial instinct is that this looks off balanced and that I want it split into two panels (which they are willing to do). Every person that I ask – and most of my friends have good taste, they say ‘Well, it makes sense, but yea .. it might look better if it were two panels on either side.’ Which just isn’t enough of an assertion – Its a pretty big deal to change it (its just really laborious) and I HATE being high maintenance. So PLEASE weigh in and tell me whether i’m crazy or that my instincts are right. One panel on one side or two flanking both sides? 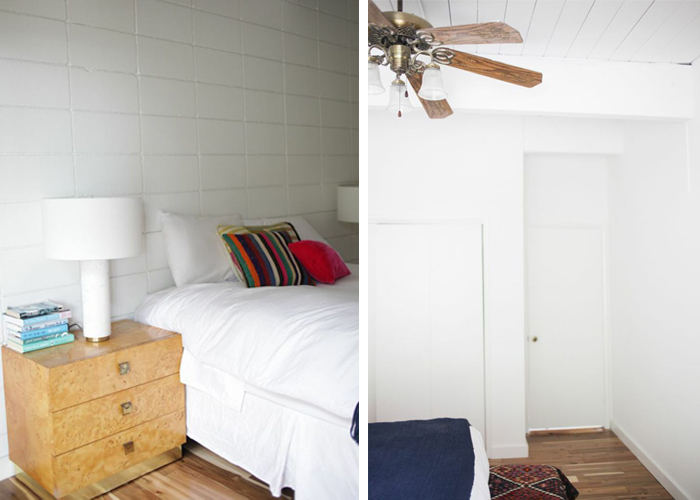 The other thing I want input in on is what to do with that wall. Obviously there is a good paint color situation – I could paint every brick something different, or a pattern on each one, or an ombre of colors, or just paint the outline of the brick … but its just a hard decision.  Part of me says, take a risk and have fun and if its dated/trendy in two years then repaint it. Its just paint. And then the other part says just get an awesome headboard and leave it white. And then one very small part of me says drywall that sucker and wallpaper the entire room … help. 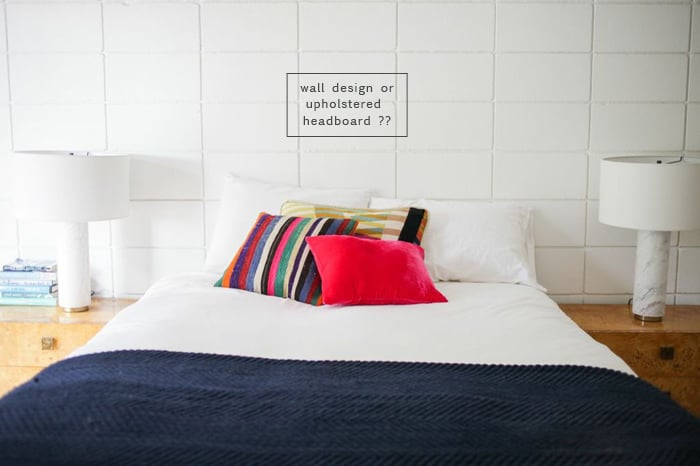 I’ll get an upholstered headboard regardless because you know how i LOVE me a soft spot to put me noggin, but I don’t want to choose that until I decided what to do with that wall (if anything).

So thats my boring guest room. Its going to be good, for sure, but it needs sooooo much help. It needs me to care … be inspired … have an excuse. Thank god that Domino is forcing me to finish it. And don’t worry, after its published i’ll still blog about the whole thing … very exciting. 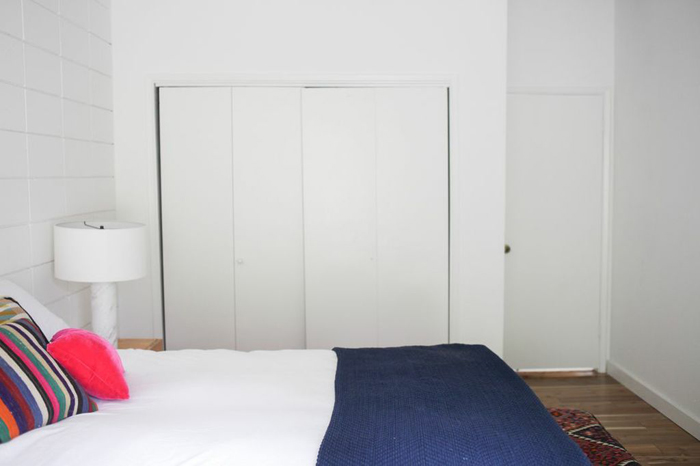 This room needs to get the pimp treatment, friends. Because I got some guests that need to deserve to feel special and right now its just your average guest room. Being a designer is incredibly fun most of the time, but the pressure to make every room beautiful, immediately, is always felt. But obviously the challenge helps me grow and the pressure forces more creativity. Such a blessing and a curse …

So my questions to you are:

1. Should I split the drapery into two panels or leave as one that slides to the opposite side of the opening?

2. What should I do with the brick wall? Dry wall over it and wallpaper? Create a pattern on the brick? Paint them all a collection of colors and patterns? Or just splurge on an awesome headboard/bed and leave white?