I’ve been meaning to write this post FOREVER. I have so many go-to’s, or styling essentials, things that I buy and re-buy, and the world simply must know about them.  So here goes … As a stylist you do a million different styles of jobs at the same time. One might be a interiors shoot for Good Housekeeping and the next might be a Anthropologie ad, but regardless you need a lot of good cheap “filler” — those pieces that don’t necessarily stand out, that aren’t show stoppers, but are inexpensive, accessible, and available. They add texture and depth in the places, or dare I say “moments” where they are much needed. These 12 pieces are pieces that I have bought so many times IT’S CRAZY. If you go up to my portfolio and click through (and look closely) you’ll see a lot of them. Let’s break it down.

1. West Elm Martini Table, $149. Every stylist’s best friend. I’ve bought the white and the gold both probably five times. They are perfect for next to a credenza, as a floating cocktail table, under a sofa table to fill that empty space, in the foreground so the shot has more depth. They are simple enough that you don’t really notice them, but they have a shape that is interesting (as opposed to a straight up and down cylinder).

2. Ikea White Racka Curtain Rod, $4.99. I used this less as a stylist because normally for styling you tape the curtain to the wall, you know, with gaffer tape. Which is why when I started designing I truly had no idea what the rules were to hanging drapery. Well now I do and I have learned that unfortunately they can be as expensive as all of Paris Hilton’s Burkin bags combined. Especially if you have like five windows in a room. So I took the risk once and used this rod and white ring set, and I’m telling you, it’s awesome. So cheap, so clean, so simple, and so far none of them have broken.

3. Ikea Sheepskin, $29.99. The amount of chairs I’ve thrown this over is stupid. But it just softens something hard so fast. It adds texture without adding pattern and warmth without color. It’s just good.

4. Ikea Ribba Frame (square), $19.99. I like the whole Ribba line, but the square one has a larger profile and the art sits in the back of the frame with the glass at the front, making it look custom framed. It looks so high end for $20. It’s my favorite go-to frame.

5. Gold Rhino, Dwell Studio, $35. I’ve technically only bought two of their gold animal menagerie; they have a horse, antelope, giraffe, and elephant. But I use shapely animals all the time for the sculptural, and yes, glamorous effect.

6. Ikea linen pillow, $12.99.  So simple and in a lot of ways unexciting, but I keep buying them because they look pretty (very textural linen), are a good size, and perfect to put a bright, poppy, patterned pillow in front of it. And the ties make it look more expensive for some reason.

7. West Elm Mongolian Sheep Pillows, $59 – $139. Again with the texture. These suckers aren’t cheap, but for some reason I can’t not throw them in a shot. They reflect the light so beautifully, look rich and luxurious, without sparkles or shine, and again add texture and depth without pattern or high contrast. It’s the perfect quiet “moment” — of which I own two myself because that sheep is very cuddleable. 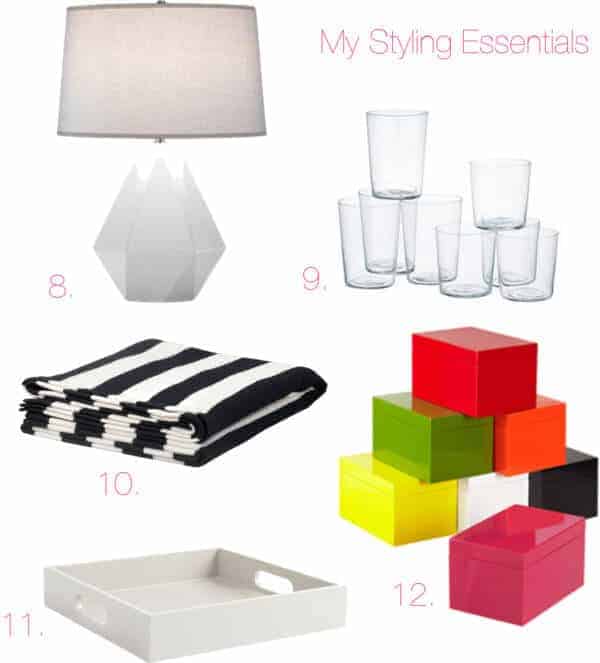 8. LampsPlus Robert Abbey Lamp, $166.91 Great shape, scale, and size. It doesn’t steal the show, but it’s not boxy and boring. It could be for someone traditional or modern, so it’s just kinda a good extra option for a pretty lamp that every editor likes. I just used it again last week and was reminded that it is the perfect scale/height for most situations. Perfect for nightstands or side tables and it looks handmade and pretty, when its really only $160.  (P.S. if you click on the link and get a bunch of question marks like I do, open it up in Safari or Explorer — for some reason their site has bugs with Google Chrome).

9. CB2 Marta Glasses, $1.95/each.  Every dishwasher’s (and Brian’s) worst nightmare. These things can’t wait to break. It’s like they have a contest on the shelf before you buy them which one will break first and potentially dismember or de-thumb a husband. I’m technically not allowed to buy them anymore because we are just constantly picking up the glass. But they are just so god-damn pretty because they are so thin. They are modern, simple and terribly cheap. When I grow up, I will have them, but until now I just buy them for shoots.

10. Ikea Eivor Throw, $19.99. This one has more contrast and doesn’t necessarily “go away, ” but what about when you need to effortlessly throw a blanket in a basket next to the roaring fire? Or fold a blanket on the top of a bench next to a stack of books? I love this blanket and have found myself buying it over and over again. It’s graphic, simple, and cheap.

11. West Elm White Lacquer Trays, $24 – $69. They come in a million colors and sizes, but I’m partial to the white or small rectangle. Nothing special about this tray other than it’s simple, functional, graphic, cheap, and available. At times I’m even sick of it, but then I find myself buying it again because it’s so god-damn necessary.

12. Container Store lacquer boxes, $7.99 – $19.99. Again with the simple, nondescript, and graphic. Perfect for shelf/coffee/console styling to put next to the more decorative pieces. Every shelf needs some simple boxes to kinda fill it out. The white ones totally go away, and the hot colors are super poppy and graphic. I have an arsenal of these in my prop closet ready for that sad lonely credenza.

So there you are, folks.  The real question is what of these things do you also have? I’m sure i’m not alone here, so let’s here ’em.