It’s not me; it’s you. Sure, you are technically in the best neighborhood. Yes, you have a fireplace. And indeed you are very cheap — the kind of cheap that people don’t believe. But we are growing and you aren’t. We both work from home and we need an office. We need outdoor space. We need more from you than you can give. Bearcat needs a whole room where she can run and play and scratch on things … and you simply don’t have that. Where can she have cat picnics with her friends? But mostly, you are just too small for us.

We’ve been looking for months and months and months. We’ve been going back and forth between saving to buy or upgrading to a better rental. We decided not to buy because then every penny of our savings would go to a down payment and we would be back to where we were three years ago — constantly kinda worried about money. It just didn’t feel right.

Here were our requirements:

3. Three bedrooms OR two bedrooms with an office.

4. In Los Feliz/Silverlake/Beachwood. (Everybody in Los Angeles knows it’s social suicide to leave the neighborhood where your friends live, and I’m anti all kinds of suicide.)

5. No carpeting or bad wood laminate flooring. There is some that’s fine and some that feels like it’s contact paper.

6. Stand alone house or an apartment with a big terrace; some sort of outdoor space.

7. Affordable, which for the rest of the country — besides SF and NYC — will still seem like a TON of money.  Basically we want under $2, 800 for a three-bedroom.

What we decided to sacrifice:

1. Curb appeal. We were way more concerned about the inside than the outside. Our requirement was that we wouldn’t be embarrassed about the outside, but we didn’t have to be in love  with it.

2. Kitchen — a good kitchen is better than a bad kitchen, indeed, but ultimately it’s less important to us than the seven things above. And frankly nothing we could afford had a good kitchen. Some were OK, but none were “good.” So we gave up on that one a long time ago.

That’s kinda it. Everything else was a deal breaker.

We looked and looked and looked (probably 25 places) and a few times I liked it, but Brian didn’t, and vice versa. We became the “adorable, yet pretty passive aggressive” couple in front of the realtors/property managers. Anything really great that we both loved was around $3, 500, which is insane, I know.

So yesterday, as I stepped off the plane, Brian called and said he thinks he found it and we went straight there.

It’s a Spanish style bungalow, in Los Feliz, with charm galore. If fits all of the categories above, so we snatched it right up. I can’t tell you how excited I am to have space. SPACE! We’ve been living in a one-bedroom for eight years (New York and Los Angeles), and before that we were in a 200 square foot studio in the East Village. Why? Because we are both petrified of spending beyond our means, which is a good thing most of the time, but at a certain point we realized that we were spending under our means and living totally on top of each other (in the bad way). The problem with being a freelancer and an actor is that you never have consistent income and so you are always scared to take financial risks.

So, thank god for HGTV. I love me some consistency. 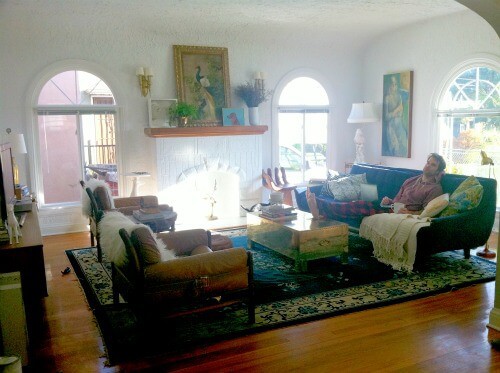 She has tons of windows and light, but yes, there is A LOT of texture on that wall … I’m in denial of that right now. Unfortunately, I know how to fix it and it’s not pretty or cheap. It’s getting a crisp coat of white paint and then a lot of photoshop when we shoot it. And those sconces aren’t actually bad, but they’ll be replaced with something dope.

The flooring is pretty good.

Here’s my office. It’s connected to the master by french doors and it’s all windows on three sides. Perfect for photos, perfect for blogging, and perfect for clients (separate entrance, even). It’s going to be such a happy, happy room. And if someday I make a human being inside my stomach then that could be where our little alien lives. Babies need light to grow, so it’s perfect. (I know this because I read Flowers in the Attic and those kids didn’t grow because they lived in an attic. FYI.) 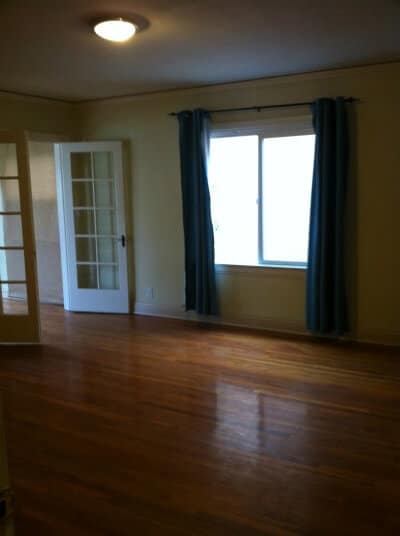 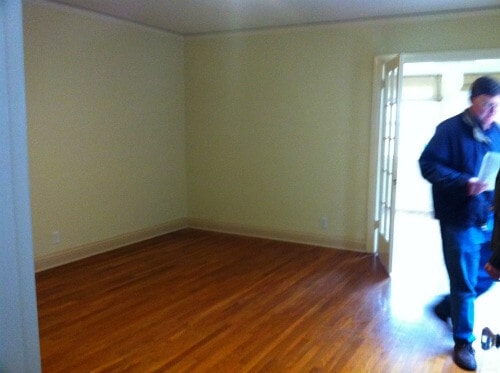 Master bedroom. Totally big and great. It’s the darkest room in the house, but I’m OK with it. One less set of black out curtains I don’t have to splurge on.

One of the bathrooms. Now here’s my thing: I prefer no renovation to bad renovation, so this bathroom is actually refreshingly original. It’s penny tile on the ground, and aqua and white tile on the side. It’s not luxury living, but it’s totally charming and was an easy sacrifice to make. I’ll always sacrifice looks over easy function. I’m superficial like that.

It has a a driveway for tons of parking. It has a big garage for storage. It’s walking distance to soooooo many restaurants/bars/movie theaters and our friends. It has a huge backyard that once we add some design to it will be adorable. It’s just so much better in every way. 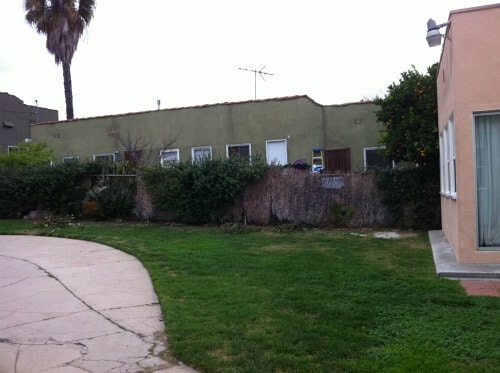 Is it perfect? Nope. But it’s such an upgrade, you have no idea. It’s like going from being a hostess to being a waitress with the best section on Friday night. We are still shooting to be a bartender someday, but it’s such a promotion.

This is just a sneak peak. I’ll do proper “before” photos soon, I promise.