A lot of you who follow me on instagram have seen sneak peeks into this project but it’s a bit confusing so I’ll break it down for you again.  Airbnb did a pretty amazing experiential marketing campaign all around LA last weekend. They hired me to oversee the design of 5 pop-up KitHAUS’s (prefab houses) in 5 VERY public locations, for 5 days, in collaboration with 4 awesome designers (and me) and 5 very cool celebrities. Yes, a lot of people and numbers were involved. While I oversaw the other four I decided to do Moby’s on my own because he really wanted to design it himself, he’s very picky and there wasn’t much for another designer to do except be a glorified assistant so I took this one myself. I went to his house and met with him, mainly to see his style, etc, but it was hands down the most beautiful house I’ve ever been inside. It’s a 1920’s castle that has been PERFECTLY restored, and with a John Lautner 1960’s addition onto it. It sits on the top of the mountain in Beachwood Canyon (in the middle of LA) where you have an intense view of the city, ocean, the secret Lake Hollywood, and the HOLLYWOOD sign is so close you feel like you can touch it. It was featured in the New York Times a couple of years ago, its called ‘Wolfs Lair’, but none of the pictures online do it justice AT ALL. Naturally I didn’t take photos to give him privacy, but man I was overwhelmed with excitement being in such an insane house. It would be like witnessing a private concert of your favorite bands, dead or alive, playing just for you. I was soooo giddy I was practically turned on, but I played it super cool, don’t worry.

Obviously what you can’t see in this is all of his crazy artwork, beautiful mid-century furniture and the John Lautner addition that blew my mind. I’ll stop talking about it. Its like when someone goes off in detail, trying to tell you how something tastes when you can’t taste it, or tells you scene by scene about a movie (this happens in LA every day) – its a visceral experience that you really have to see for yourself to get it, so i’ll go back to talking about mood boards and pillows for now.

I gave Moby a questionnaire (yes, a style diagnostic i’m never letting go of that) and most of his answers were about simplicity, nature, zen, and mid-century design. He leads a pretty peaceful life for a musician so he wanted his pop-up to reflect that, despite the fact (or more like BECAUSE of the fact) that it was living at The Viper Room on the very notorious Sunset Strip. In case you don’t know LA, nobody that really lives here goes to the strip. There are a lot of clubs there, and general, well, you know people who go to clubs. But the Viper is old school and has some history – as does this street so it was an appropriate place for one of these pop ups. 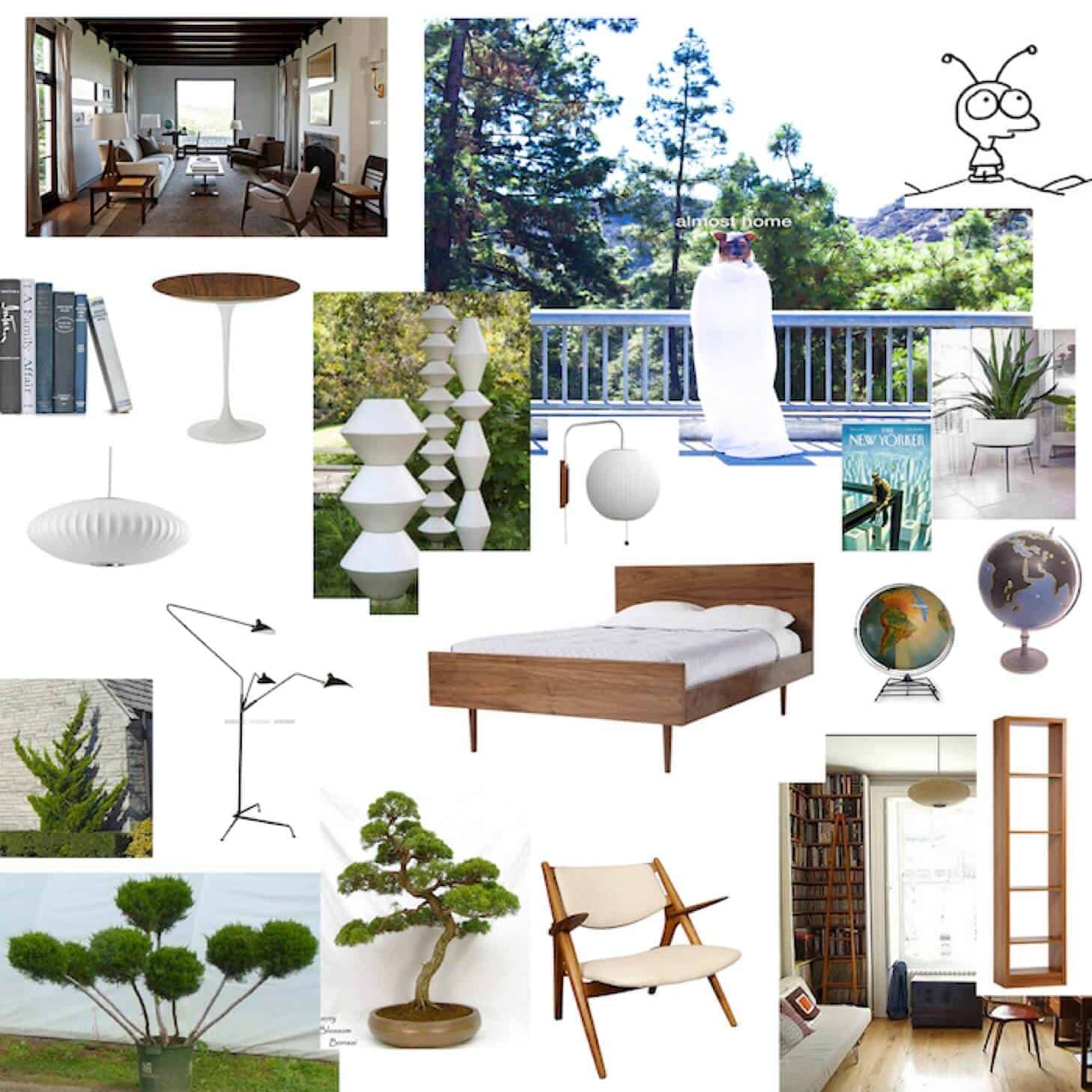 His first request was to have it wallpapered in a nature photograph that he would take himself. He took it the next day (top right with the girl in it) and added that text onto it (which I hear might end up being his next album cover). I had it made into wallpaper at Astek Wallpaper for around $800 and then had it installed in the house.  It immediately made it feel like you were surrounded by nature. The rest of the mood board was mostly inspired by him – he called out Saarinen, Nelson, Bertoiia and Mies Van Der Rohe and I started collecting those pieces.  And for accessories he has a vintage globe collection in his house that is amazing and his only criteria for collecting is that it has to have countries on it which no longer exists – way easier than you think to find. His other main request was that it was to be surrounded by trees – and I mean covered, all twilight style. He wanted trees that were specific to the mountains in LA – junipers, pines and lots of bonsai style (pom pom) japanese trees and scrubs. Thousands of dollars worth of rental trees later he got his wish. After he approved the mood board the Tajima team put it in a computer rendering for us to obsess over. 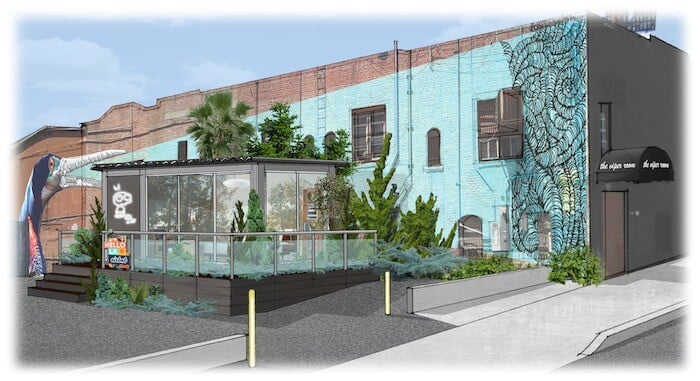 He liked it, but requested more trees. The man is obsessed with trees, and in fact called himself a plant hoarder when I met him. A man after my own heart. The computer renderings don’t show a ton of interior detail and don’t give off enough life, so then I had an artist do an interior artistic rendering/sketch of it: 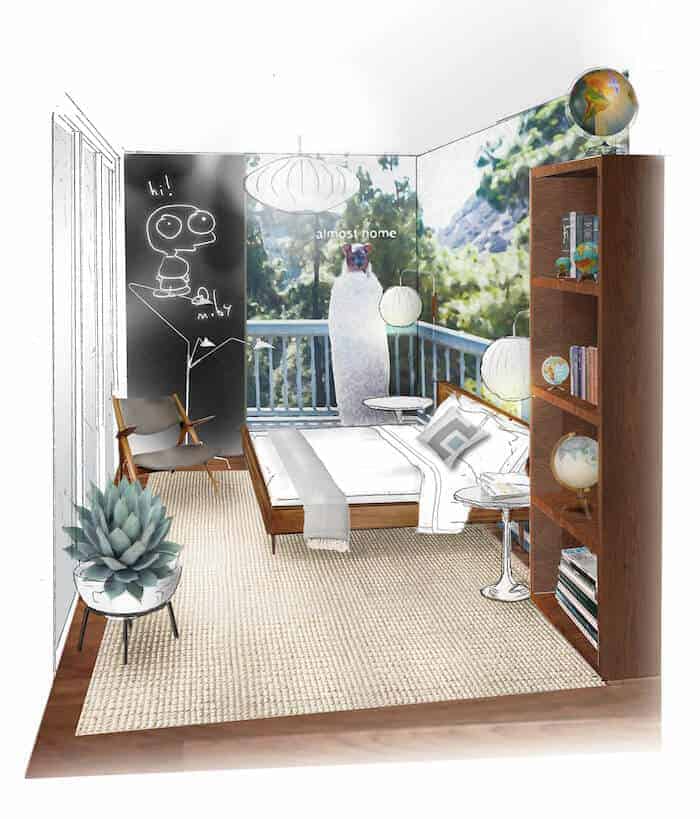 This showed more specifically what is in the pop-up and how it was going to feel. Seeing your work like this is so satisfying. Of course the pop-up looks kinda spacious and open in there when in reality its TINY and had to be oriented a completely different direction. I mean its like a 10×12 room, folks. CRAZY SMALL. Resource: Bon Voyage Globe (top shelf)

But here she is, from the outside: 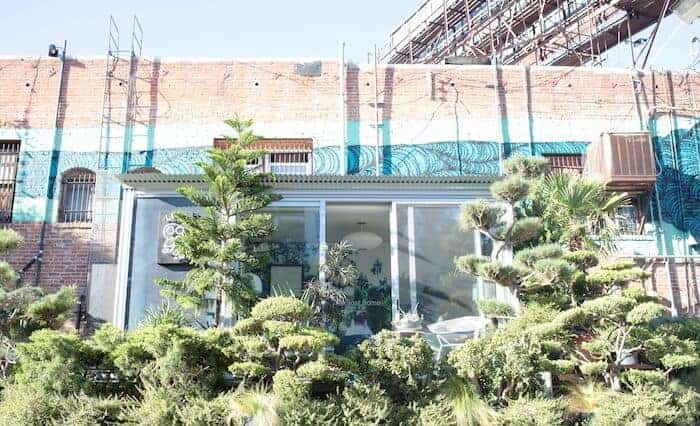 Oh, I got him some trees alright. The neon sign (on the left) was a custom sign that I had made based on a drawing that he did. I literally just handed the neon sign people the drawing he did and picked up the sign 5 days later ($950). Now I want everything as a neon sign. ‘Casa Hendo’, Bearcats face, EVERYTHING must be neon. 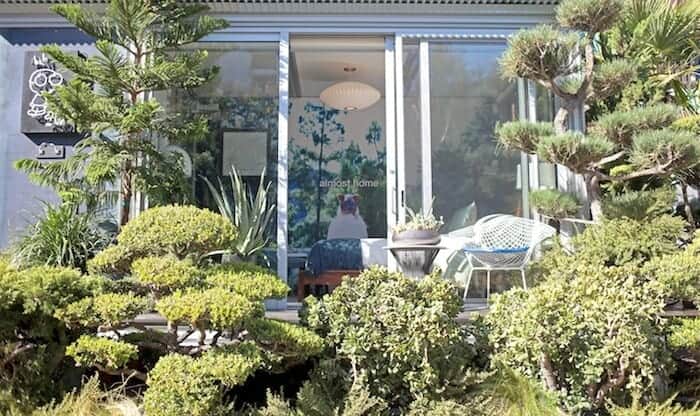 Inside the pop up was a pretty easy mix of nature and mid-century – and since it was surrounded by trees you really had no idea that you were staying in a parking lot behind the sunset strip. Mission accomplished. 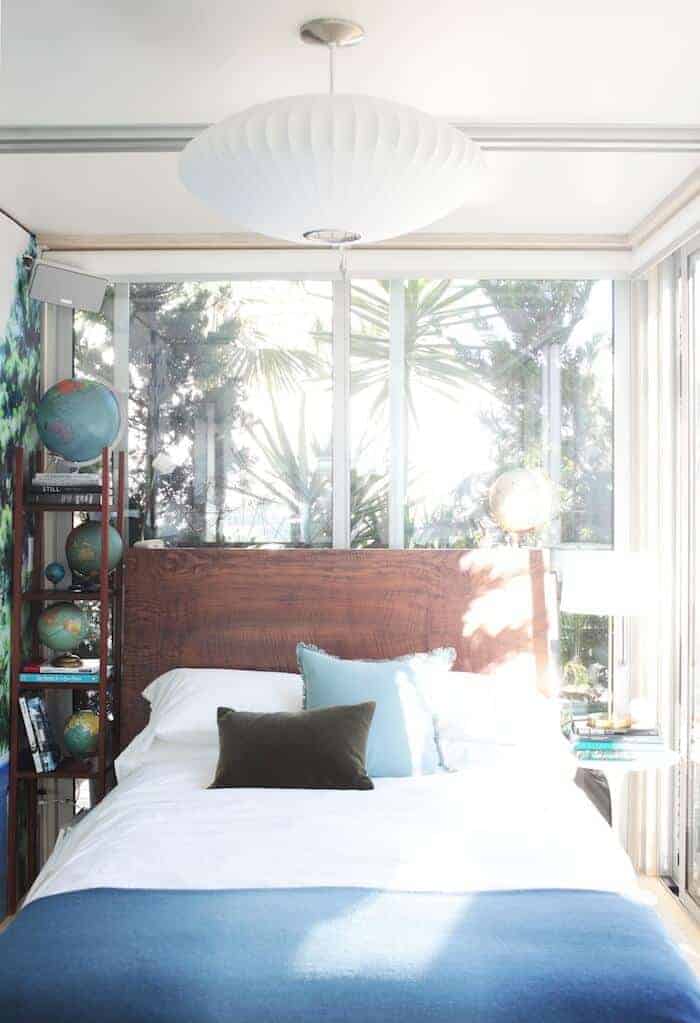 Before you ask (because everyone has, including Moby) the bed was a rental from a prop house – not to be purchased anywhere sadly.  The shelf is from Dekor, the bedding was a combo of Ikea and West Elm, the side table  and lamp were mine. 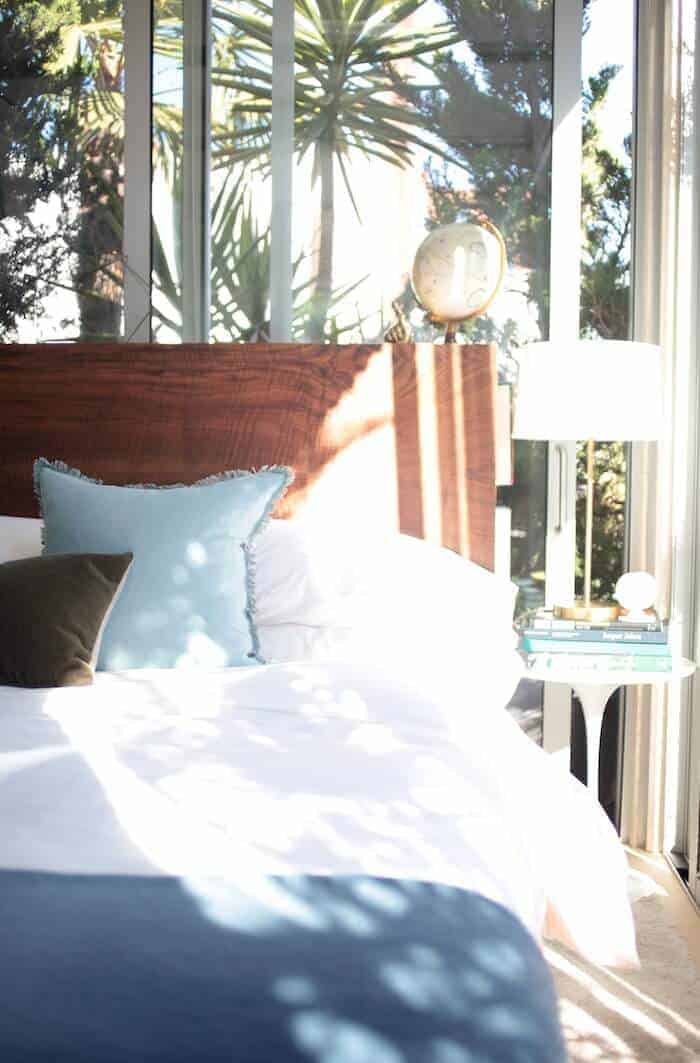 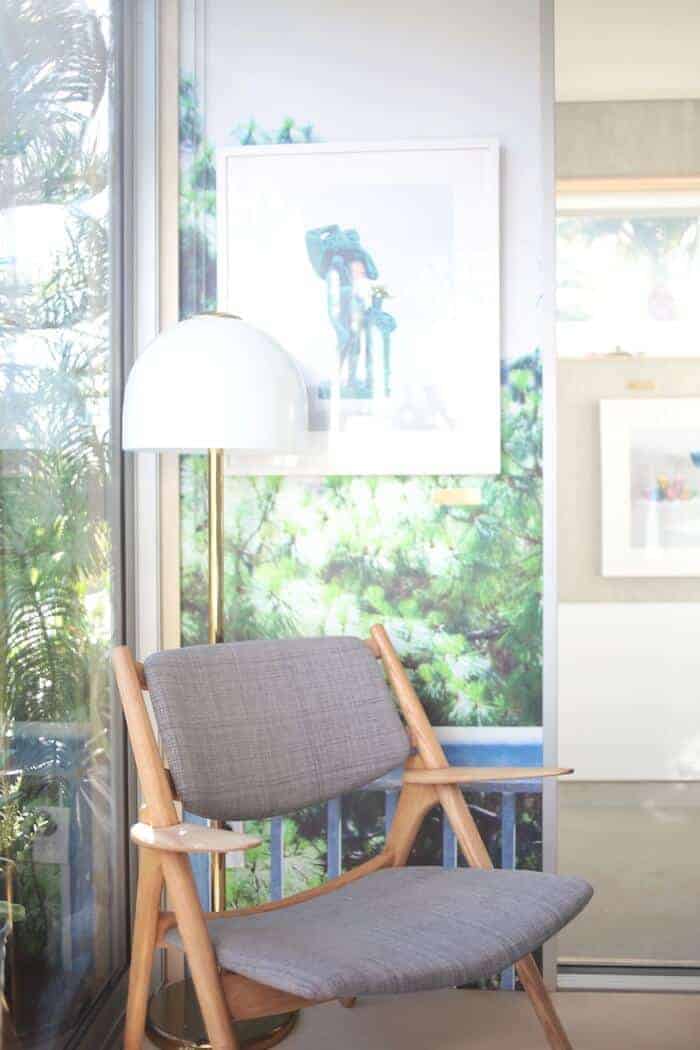 The vintage Wegner chair and that lamp as you all know is mine. Thank god for my inventory that i basically just loaned him or else this pop up would have gone WAYY over budget.  The piece of art was in collaboration with The Broad gallery which manages Jeff Koons work. Its a photographer of Jeff Koon’s Metallic Venus (2012). 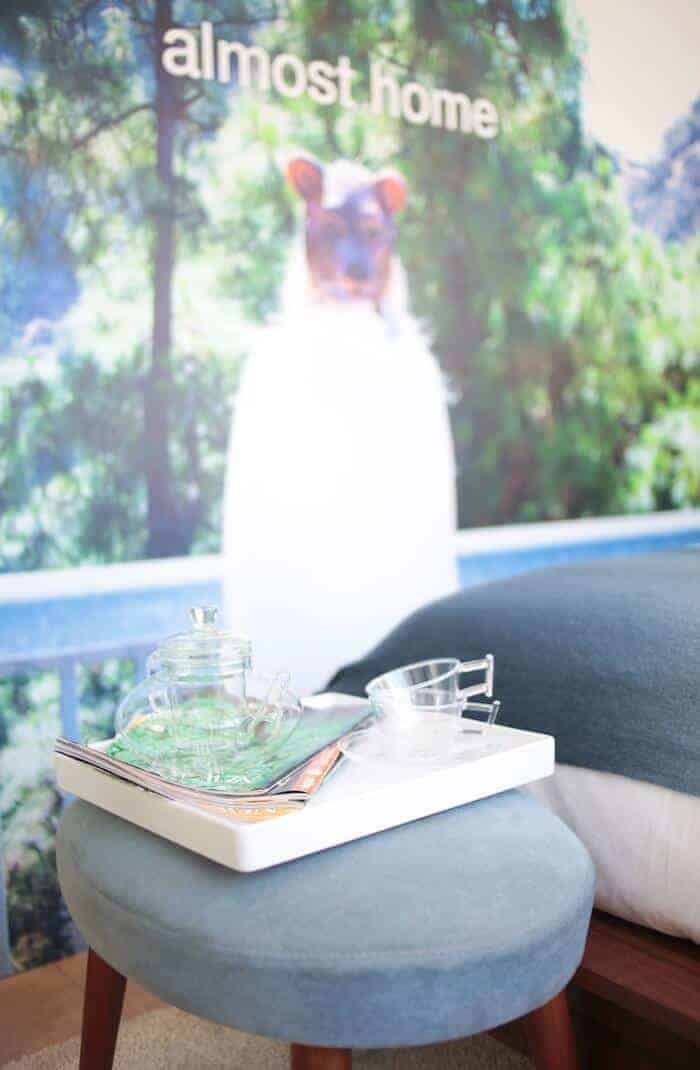 Moby called out some Japanese references (not literally, although that sounds hilarious) during the questionaire and I know that he loves tea based on the fact that he used to own a vegan tea joint in New York, so thats why there is a glass teapot in there. The details, folks, the details. Also as a kid growing up in New York (and CT) he loves The New Yorker, so naturally we brought some in. 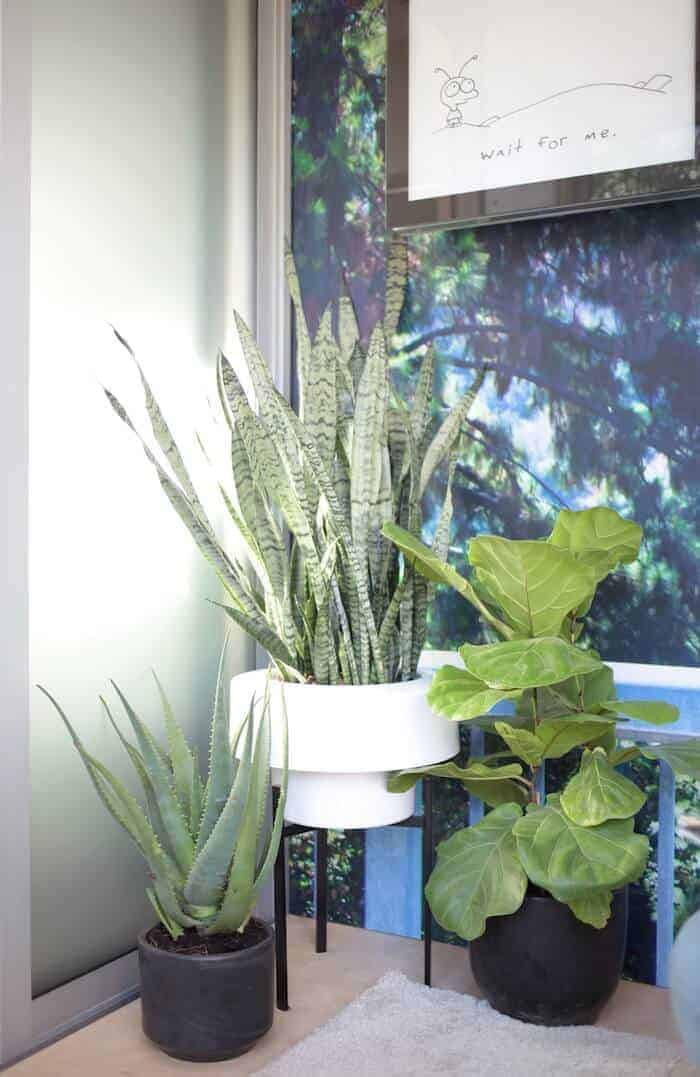 The white planter is from Heath Ceramics (although its enamel) and I love it so much. The other pots are vintage architectural california pottery. 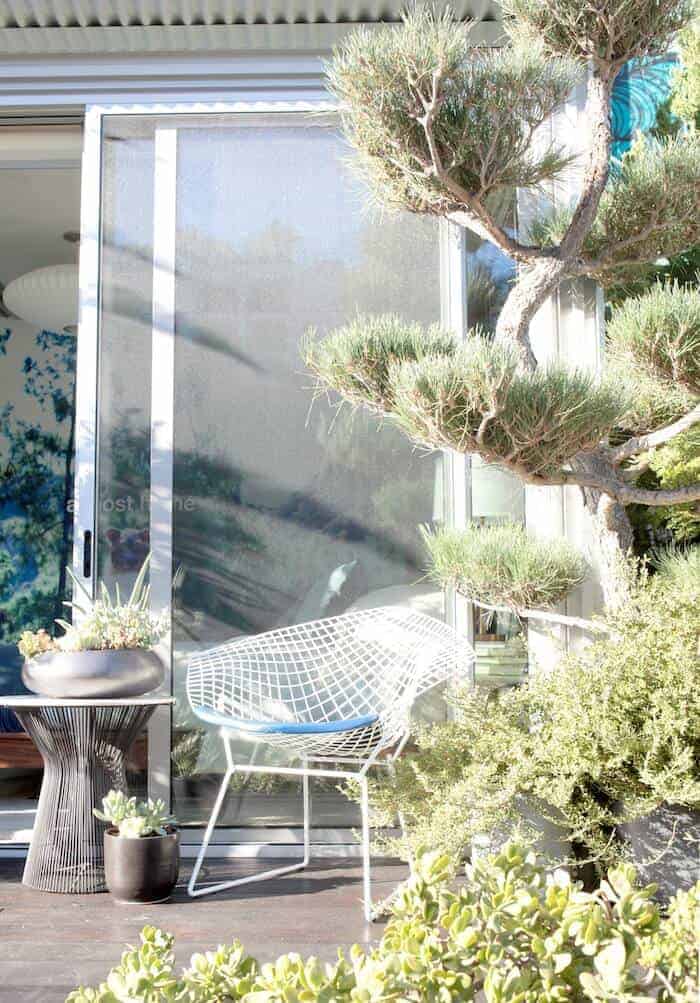 All in all it was a total hit – for me mainly because Moby loved it. When he came to see it finished for the first time I was a bit nervous that he was going to like it but you know, kinda pick it apart – but the man really liked it, asked a ton of questions about where I got each piece, wanted to buy some of them and after rearranging a globe or two gave his stamp of approval.  He was 100% LOVELY in every way. Totally engaged, excited and told some weird and fascinating stories. 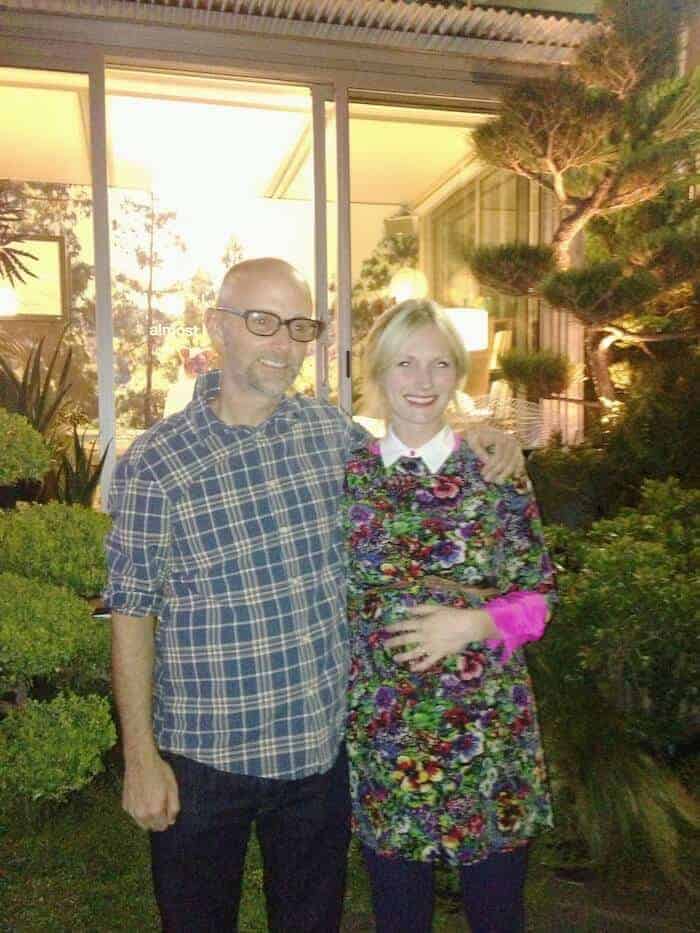 Also he’s clearly the baby daddy based on our pose. Posing has become VERY difficult these days because for the sake of photo posterity I want to ‘prove’ that i’m pregnant but then it just looks like a pregnancy family portrait every time. Me, Moby and our baby, ‘Wolf’s Lair’. I’ll be blogging about the rest of the projects later this week or next, so stay tuned for BASH, please (with Molly Sims), Matthew Lanphier (with James Franco), Orlando Soria (with Anjelica Huston) and Justina Blankeney (with Lake Bell). All photos (except the last one) by Tessa Neustadt