(But first, if you haven’t stopped by in a couple days you might not have been properly bombarded by my campaign for Best Home Inspiration blog by Apartment Therapy; it’s called The Homies. I made it to the final round and need your new votes to make this possibly happen. Thank you everyone who has voted yesterday and if you haven’t yet, please know that your vote would mean the world to me. You can vote HERE).

Having a design client with good taste is like casting Meryl Streep and Denzel Washington in your movie. Even if the set falls apart, the script gets butchered, and you’re forced to cast Ron Howard’s second cousin’s weird goth daughter as the love interest, you know it’s still somehow going to turn out to be pretty great and people will buy tickets. I mean, its Meryl. She’s great at peeing.

Sometimes I’m convinced that the biggest factor in being a good designer is having good clients, which is kinda bullshit, right? But if your clients like weird contemporary furniture and don’t want to spend any money on cool stuff, then its VERY difficult if not impossible to do something you are really proud of.

So these clients were awesome (as are most of ours actually) because they  already had that beautiful dining table and those chairs, Jonathan Adler rug, vintage credenza, mid-century lamps, and “For Like Ever” poster, which I’m starting to think is iconic of the 2000’s and will go down in time as a relic of that decade.

It just wasn’t pulled together. So here’s where we started:

The Jonathan Adler rug was simply too small for the living room. We tried layering it on top of sisal, which normally works, but it just wasn’t as awesome as it should be. PLUS the dining room clearly needed some color. So we tried the rug under the dining table and BOOM, we were in business. 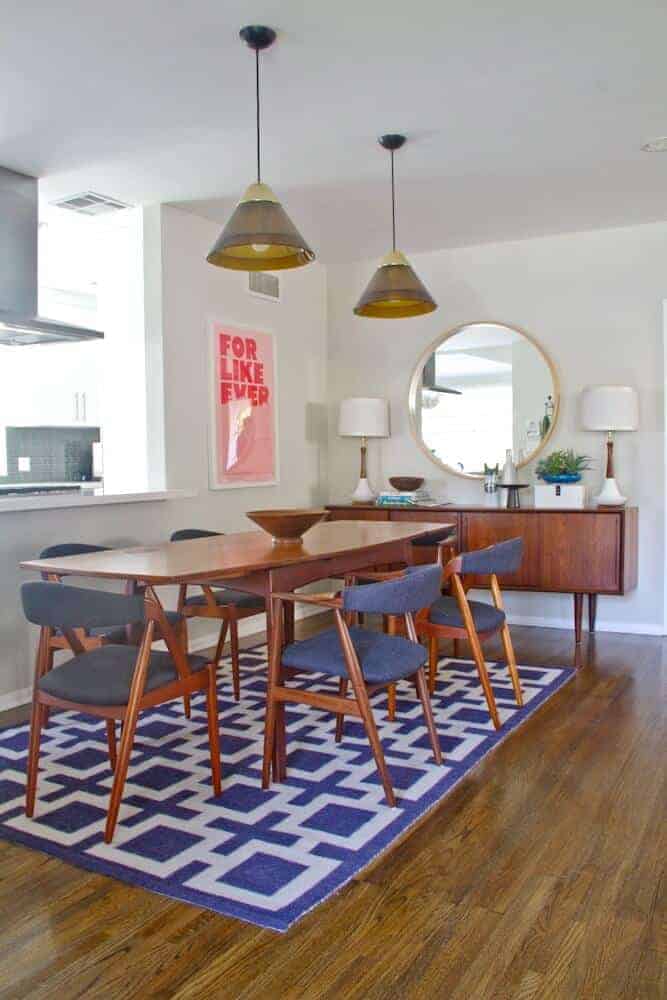 We reupholstered the chairs in a neutral fabric — a charcoal gray wool. They were about $60 a piece to redo (I think), not including fabric, but we only needed one yard per chair. 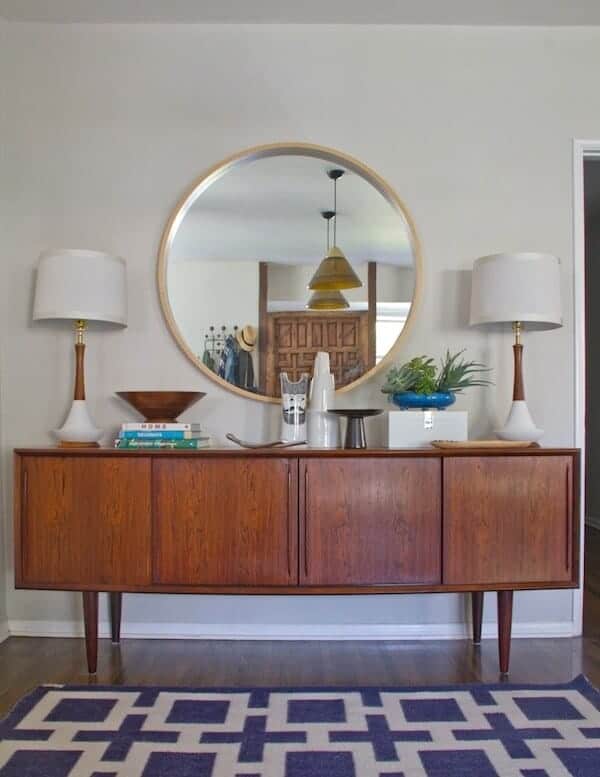 The mirror is vintage Ikea (probably five years old) and it’s VERY, VERY sad that they don’t sell it anymore. I actually bought it from my friend Jen who was selling it for $80, which is a total steal for a piece that big. Talk about more bang for your buck. It’s graphic, it brings so much light to that side of the room, and it’s exactly the right size for a credenza that big. 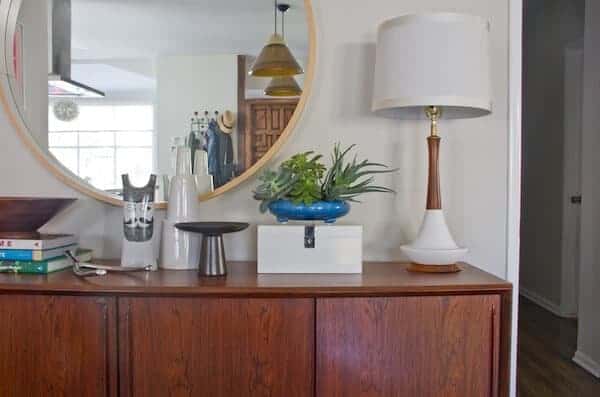 Almost everything in that shot is vintage, except that white lacquer box from West Elm and that chrome wishbone from Plantation. 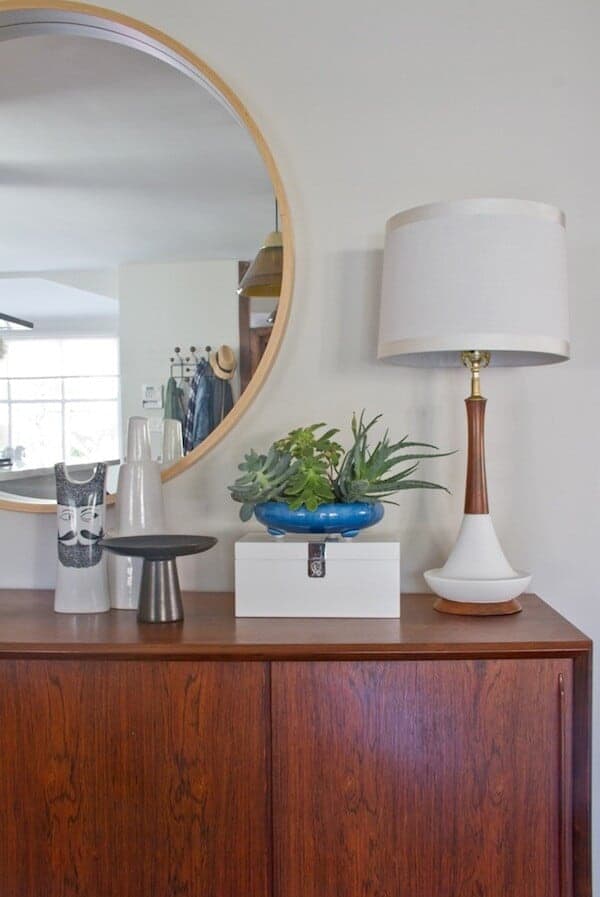 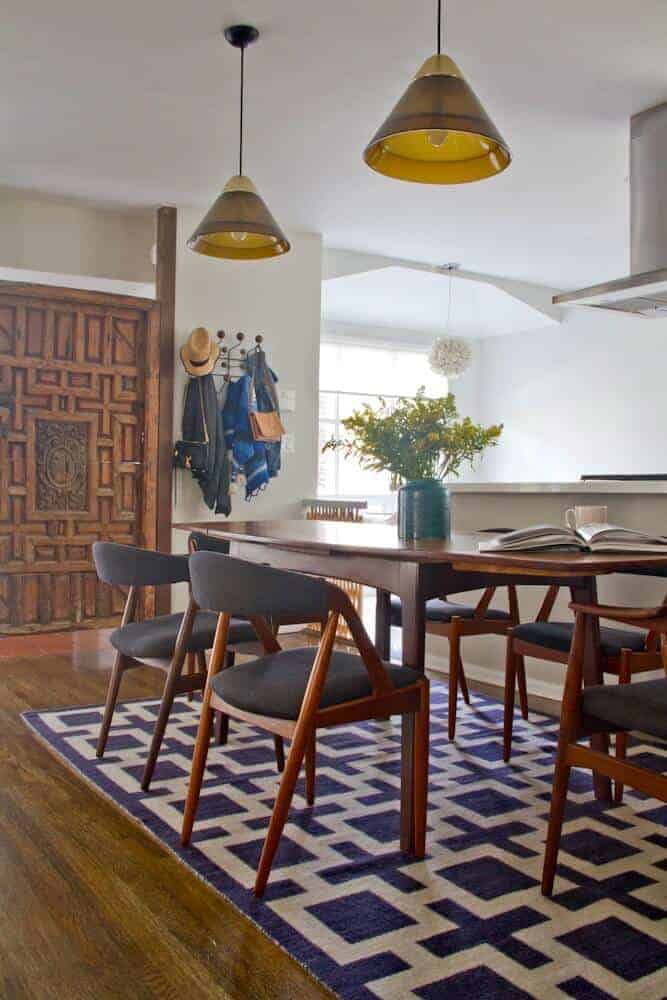 The clients bought these vintage pendants from Mohawk General Store, but again everything else is vintage.

Don’t forget to check out their living room, too, with their VERY fun gifs that I made. Thanks to Lauren Pieri for all the pretty photos!