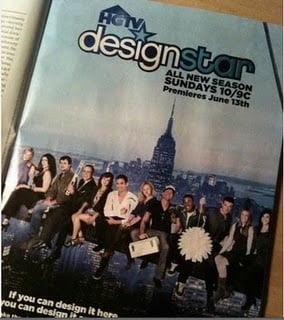 Let's get personal on this thursday morn.

3 days ’til the first episode.  It was so far away at one point, and now, whomp here it is.  HELLO.  Part of me is like, sweet i’m on HGTV. and the other part of me wants to cover my eyes really really really hard, knowing there is no way i’m going to be able to watch myself.   I’ll plan a big party for the premiere, then almost cancel it and have to be talked back into it by my LA besty, where she reminds me that my friends like me, that’s why they are my friends.

What’s the big deal, you ask?  Here it is:  I’m pretty scared of seeing myself on camera (HD people, hello), i’m nervous about hearing other peoples reaction to me (i’m probably going to gell all fingers-in-ears when it comes to criticism), i’m especially nauseous about what I might’ve said about some of the other designers that I don’t remember saying and what they might’ve said about me, because I actually care about these people.

You see, the first episode is extra tricky because nobody knew each other yet, we were basing our opinions on first impressions (basically good old fashion judging book by cover stuff).  As far as critiquing the other designers?  i really really really hope I was objective and honest and their personality had nothing to do with my opinions of them.  but let’s be real.

I  have always been a huge fan of the show and a total HGTV addict.  I looked forward to Design Star each summer, imagining and picturing myself on it (apparently am I a total narcissist), and yelling ‘stop it right now!’ and ‘no you did not’s and other lame not-so-clever comments at the poor tv when the designers did something I didn’t like (hungry, mouth? ’cause you are about to eat a lot of those words).  I’m pretty addicted to all of the talent competition shows (Project Runway, Top Chef, pretty psyched about the new Work of Art on Bravo, too btdubs).  So, yes,  i’m scared but i’m also just super excited to watch a show, and with Sir. Mark Burnett producing it I really really really really think it is going to be edge of your seat kind of TV.

So my new thing is that I pretend that I’m not on it, that its some other blondey with a snaggle tooth up there, and when I take myself out of the equation then I feel soooo much better and the anxiety goes away and I get super excited to watch a good show.

I guess my biggest fear is that I will be objective enough, removed enough from the situation as I have been in past seasons.  Unfortunately i’m not particularly self-delusional, so I worry that i won’t be able to be my own fan if I don’t deserve it.  Where is the self-help book for this, huh?

Heavy stuff for a thursday morning, eh?  Perhaps i have jetlag from my Seattle flight, or maybe just good old fashioned ‘i’m about to be on a reality show’ jitters.  Isn’t there some sort of home remedy for that?  shouldn’t I rub, like, toothpaste on my toes, or drink apple cider vinegar upside down or something?  What would Spencer and Heidi do?    don’t answer that.