Oh this guy?  Yeah, that’s Bearcats dad, being held by that guy, Sir. James Franco, one of the most popular and yet controversial actors in Hollywood. He, in conjunction with Matthew Lanphier, designed a popup house for Airbnb, which resided in the Hollywood Cemetery – one of the most beautiful and iconic places in Los Angeles. I oversaw it and therefor i’m blogging about it, but Matthew is the real designer here.

Also  in case you were confused, he’s a man – James, that is. A rugged, bear hunting man. Matthew wanted it to feel young yet sophisticated, vintage yet masculine and with a wink or two to represent Franco’s mischevious side.  Here’s his mood board: 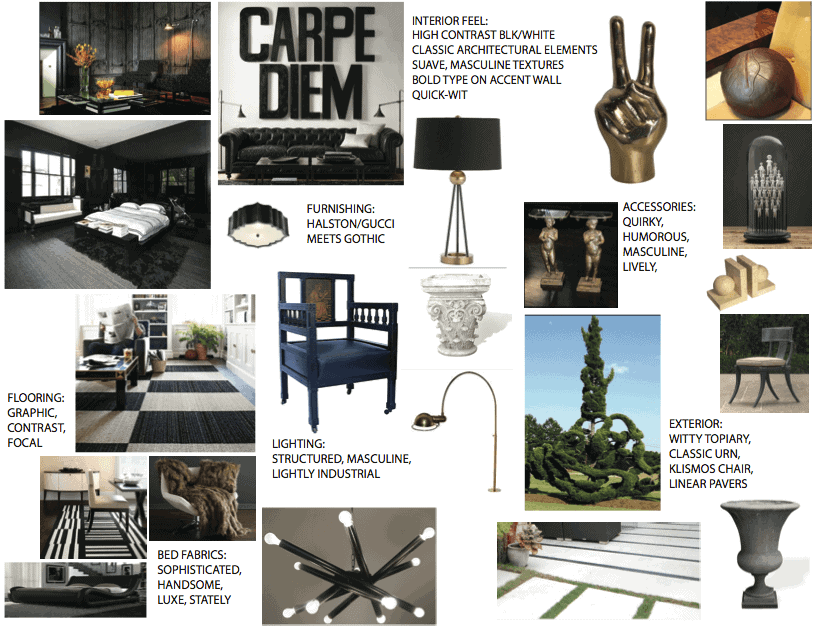 He fancies himself an artist, actor, intellectual, writer, philosopher, and a general bad ass (again, with the bear hunting), so Matthew tried to bring in all of those sides of his personality while at the same time making it appropriate for the cemetery – so there was kinda a Tim Burton bent to it. 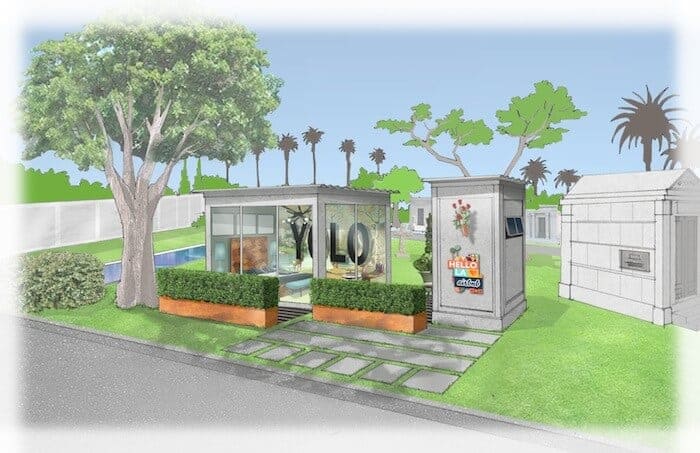 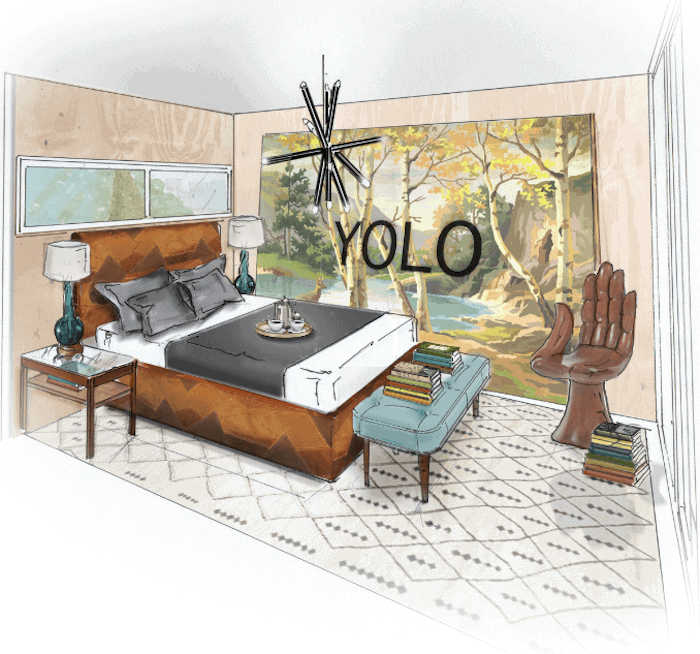 And here he is in the flesh: 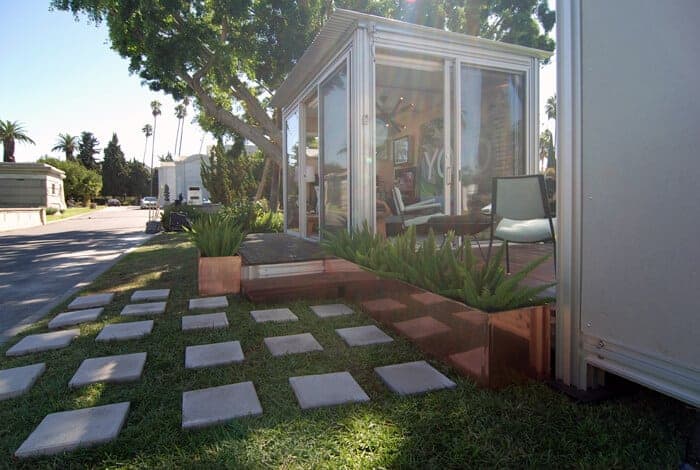 On the back of the building there were 32 vases/plaques that had quotes from James Franco’s favorite writers – Alduous Huxley, Jack Keroac and … James Franco. Like a mausoleum … 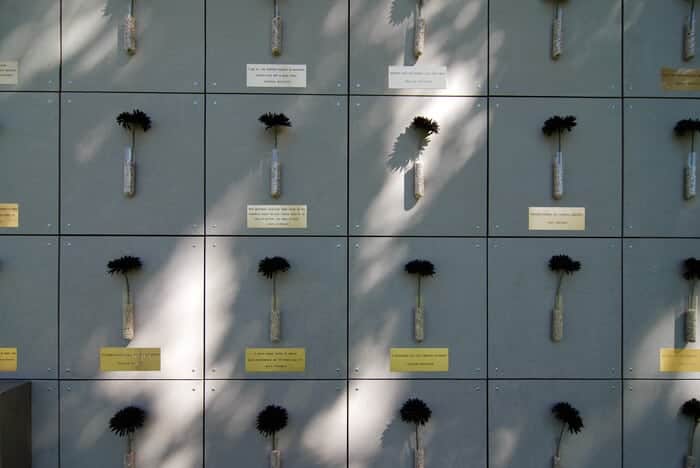 Inside we had this pretty awesome mix of ‘dude’ and ‘weird’, must like Mr. Franco himself. I love how eclectic and interesting it turned out, with enough ‘young hipster’ to not make it from feeling so grandpa. When James filled out my style questionaire he said that he loved the 70’s, Americana and italy so Matthew brought in some 70’s kitsch in the paint by number, (that also felt pretty Americana) and i lent him my hand chair which is both 70’s and Italian. The space was riddled with books that he loved and there was virtually nothing new, which was a request of Mr. Franco’s. 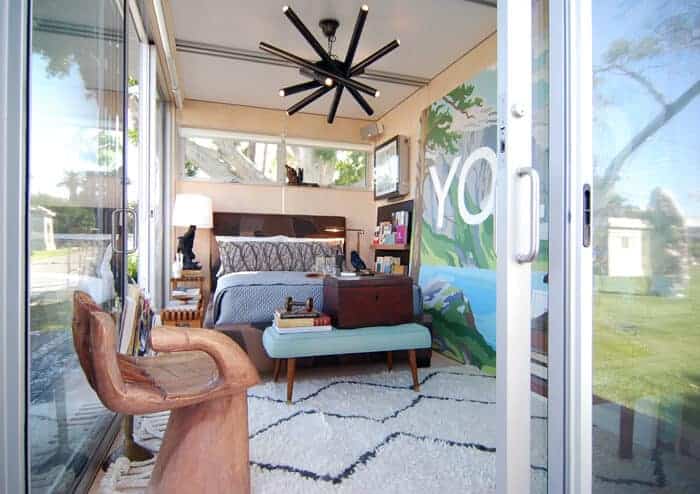 Oh the painting? YOLO, get it? Obviously meant to be ironic since its in a cemetery and I think its hilarious. That piece was a custom paint by number painted by Orlando Soria and Matthew and its KILLER. 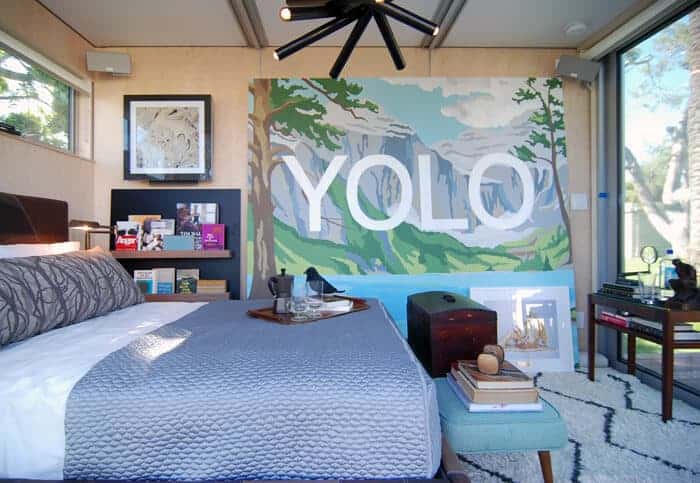 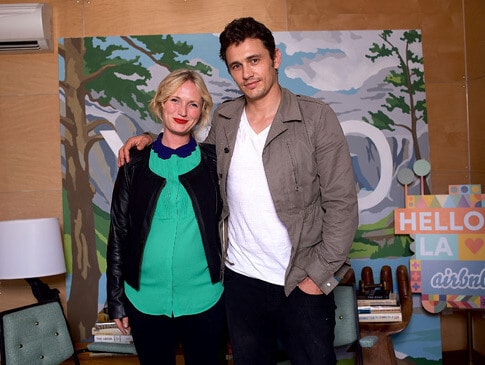 And there we are. The happy family. We had just met with our new doula, discussed our birth plan and are just oh so excited for the little one to arrive. And by ‘little one’ i do mean what looks to be a large bean burrito in my stomach. Please FOR THE LOVE OF GOD, remind me to wear the ‘pregnancy indicator’ belt (you know, that one right below your boobs that tells the world that you are pregnant?). He was friendly to me and as we were about to take the picture he said, ‘Oh are you pregnant’ and I said, ‘Yes. But don’t worry, its not yours, ‘ which wasn’t exactly comedy central material, but I thought wasn’t bad for the only sentence I ever got to speak to Sir. James Franco.  He laughed, we smiled and then made sweet love.

In case you missed the other Airbnb collaborations on the blog check out Moby’s, Molly Sims (designed by Bash, Please), Anjelica Huston (Designed by Orlando Soria), and Lake Bell (designed by Justina Blakeny).

107 Comments
Oldest
Newest Most Voted
Inline Feedbacks
View all comments
Our sites use cookies to improve your experience. Learn more