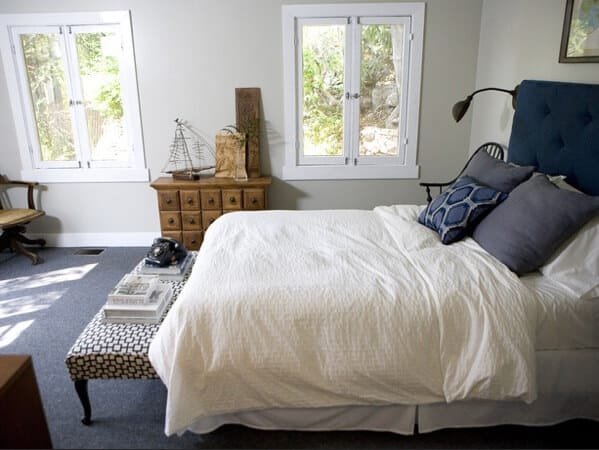 OK.  I’m back.  and I realized that I forgot to post/blog about Ian’s master bedroom redo.  The below picture makes me want to build a time machine (as we all know i’m great at building electrical inventions) and go back 6 weeks to style this bed better. I’m not there when the pics are taken, I OK them, and then leave the house to do other around town shots, and then stuff happens.
So I love Ian’s bedroom regardless of the messy bed.  I really wanted it to feel masculine but not too hotel room and I feel like mens bedrooms can go in that direction really easily.  And the more you decorate a man’s bedroom, the less straight he looks.  But at the same time I still need to ‘design’ the room.  So here’s what I did.  I painted the walls ‘Sandy Hook Gray (BM) which is beautiful, and toom down the window treatments.  Ian didn’t want any at all, and I agreed. That room doesn’t get very much light and is surrounded by trees, so he doesn’t have privacy issues.
After replacing the carpet – OOH i haven’t talked about that yet.  So replacing the carpet wasn’t in the budget, but i insisted on it because the bland beige looked dirty and just didn’t work with any of the colors we had going on.  I looked at a bunch of options that we could possibly afford and get in only a few days and most of them were either too suburban for Ian or too cheap looking. So we went with this medium toned gray commercial grade.  Calm down.  Yes, its kinda weird to put commercial grade carpet in a home, but YES it totally worked and looked great.  (oh, for the record we got estimates for replacing the carpet with wood flooring, but because of the sloping of the hill and how irregular the rooms were it would have taken 10, 000 and 3 weeks to do, so not an option unfortunately).
The carpet was simple and clean and while it was warmer than wood, it still feels modern.  And the whole house (including 3 bedrooms, 2 staircases, 2 hallways and the TV room) was $800 – installation was $1200.  To get the other carpet that I wanted or to get sea grass flooring – wait is that what its called?- it would have cost 3-4000 just for the carpet, plus installation and i’m not sure that it would have looked as good.  This carpet, because it has such a low pile is still cool to throw rugs over.

The bench I bought at a thrift store and had it reupholstered, by the same guy who did the headboard. I handed the guy navy linen with a picture of the west elm headboard:

I like it what I got, but there was supposed to be box piping around the front of the sides and more tufting, same with the bench.  Kinda annoying, but nothing you can do about it except learn from it and realize that no matter how much someone says they understand, put EVERYTHING in writing.  The headboard only cost $350 for a queen (west elm was $510 with shipping, and no navy fabric).  The bench cost $100 to reupholster and refinish – although he was supposed to strip the legs and just treat them without staining so it would be a light natural wood and instead he stained them dark which i don’t hate, but i don’t like.  This is a case of ‘you get what you pay for’.
Diamond foam and fabric (where i got the wingback and 60’s chair reupholstered) does amazing work but they aren’t cheap.  This guy has a little shop in Echo Park and came highly recommended and is crazy cheap, but we took a risk, for sure.

The dresser came from Pepe’s in Echo Park, it was $350 and its in perfect shape, but from the 60’s.  The lamps were Ian’s lamps already, but in that terrible green color, and for the show we wanted to use as much of the owners stuff as possible, so I decided that the shape wasn’t bad – and the shades were great, so we spray painted them.  Same with that mirror. It came from a thrift store and was brown and ugly metal.  Don’t worry, i won’t be one of those ‘spray paint everything’ designers/hosts.  But some things just need it.
The Sconces:  yes I put goose neck lamps on the wall.  because i be kerazy.  they look awesome and totally work.  For those at home – these lamps have holes at the top, but not the bottom and while they work on the wall ok with just the top being adhered to the wall, eventually with use, they move to much. So you need to drill a hole (with a metal bit) through the bottom, too.  These are great for reading, but not good for ambient lighting because the shades are metal and focus the light down.

The bedding.  The duvet is from Ikea, we tried to get this one:

But they were out of stock.
For the
pillows:  we made these gray linen pillows – you might know about my obsession with linen.  Its strong durable, textural, cheap and gets softer and softer with age and washings.  There are some linens that cost $30-$40 a yard, they are mainly imported from France and Belgian.  But the American or Asian linens are great and sometimes cost around $7-$12 a yard.  Wash them twice before you use them, so they get super soft and textural.  And the throw pillow that is on the bed is a fabric sample from Diamond that I purchased, then put linen backing on it to make a pillow.
I’ve added an awesome turkish rug in here,  and put some art on the wall above the asian chest on the left.  It just needed a couple more elements.  I’ll take pics.
Any questions, folks?