I mean … this existed in the world without me knowing about it?

Its SOLID brass.  Like the weight of an academy award or four. Scott spotted it and I immediately took it out of his hands, both of us knowing that it was way more me than him. I asked Santiago, the dealer, how much it was and he said $175, which was very bad news to me. He came down to $150 (saying, “I paid $100 for it!! I gotta make some money!!”) and I relented because it is a show stopper. Later whilst walking around the flea market and getting compliment after compliment (Scott getting more and more jealous) we ran into another dealer that I know (and is somehow related to Santiago) and he smirked and asked “How much you pay for that?” I said “$150, ” he smiled. I said, “How much did you sell it to Santiago for?” He said “$60.” 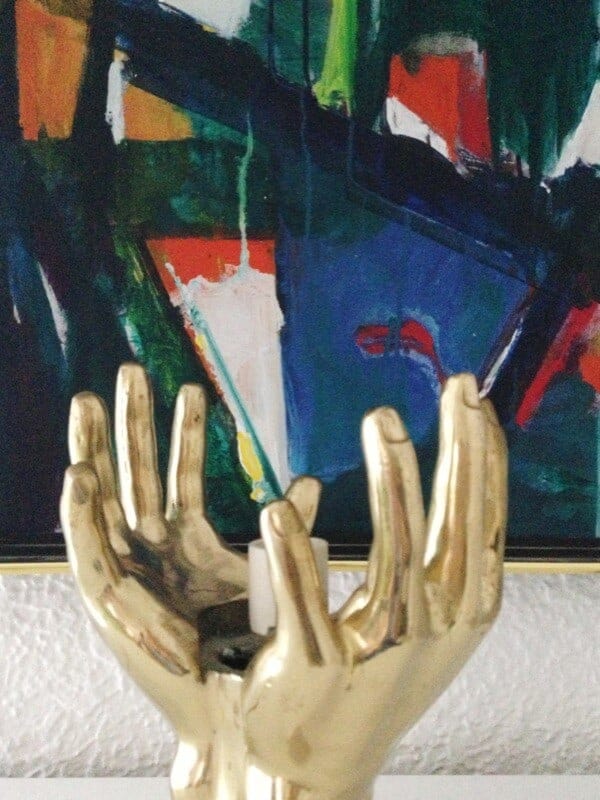 So annoying. Had I arrived at the flea market an hour earlier I would have saved $110. THAT IS A LOT. Also, when a dealer tells you what they bought it for, you can almost ALWAYS not believe them. I’m not calling them liars, it’s a smart tactic that tugs on your humanity. I mean, YES, I do want them to make a living so I certainly can’t pay them the same that they paid for it … but Santiago, who knows me and loves me, padded his purchase price by $40. I’m a sucker, but a solid brass hand lamp owning sucker. 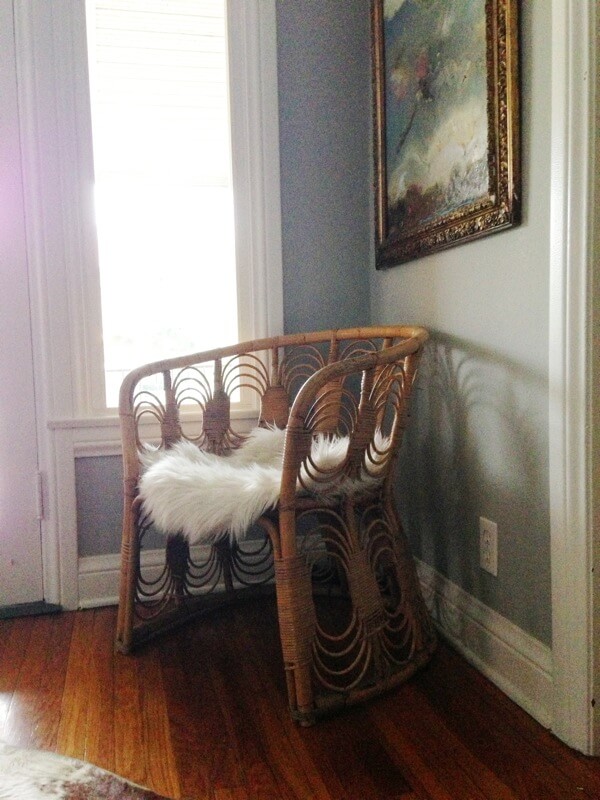 You know what I don’t need in my life? This wicker chair. But look how cute it is. $50, my friends. I especially like the scale — I feel like even a man could sit it in, it is so wide and low. Worth every penny, but totally unnecessary. I’m a wicker hoarder. 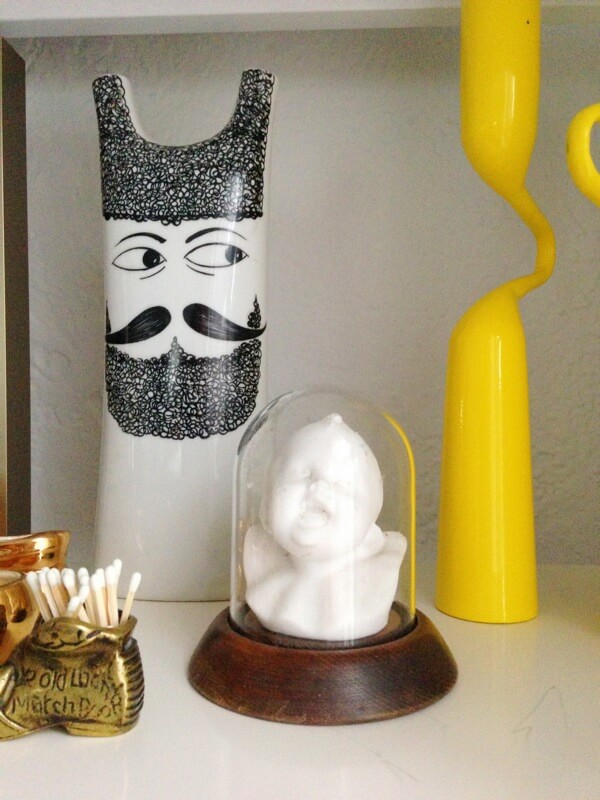 Oh, what’s so creepy about my porcelain baby head? I got it at the flea for $5 (I collect heads), and then found the dome with weird dried flowers in it for 75 cents. It fit perfectly. And now for my viewing pleasure I have a creepy baby in a glass dome to stare at. 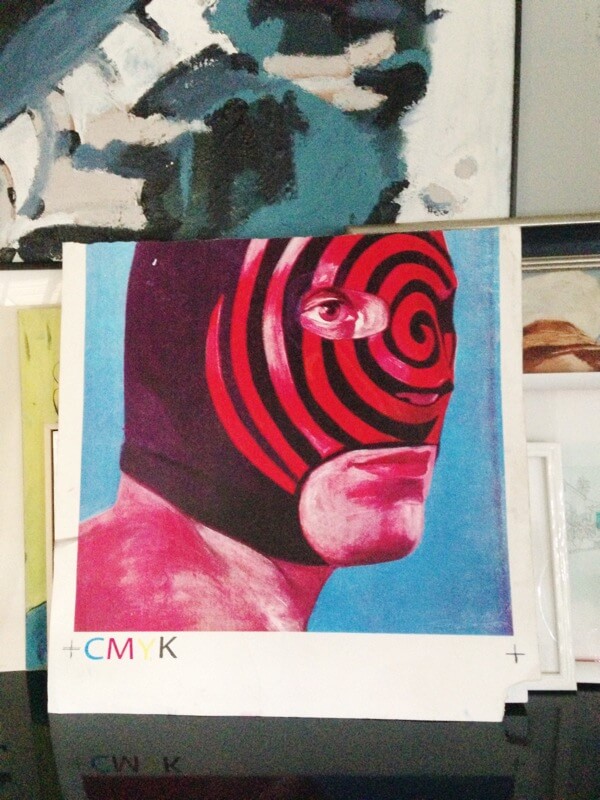 This piece of art is crazy colorful and weird. I totally love it. I’m not sure if it’s a lithograph or pen drawing or what, but the colors are so saturated. It was $10 and Brian totally responded to it, saying “that thing’s cool, ” so it was worth every penny. 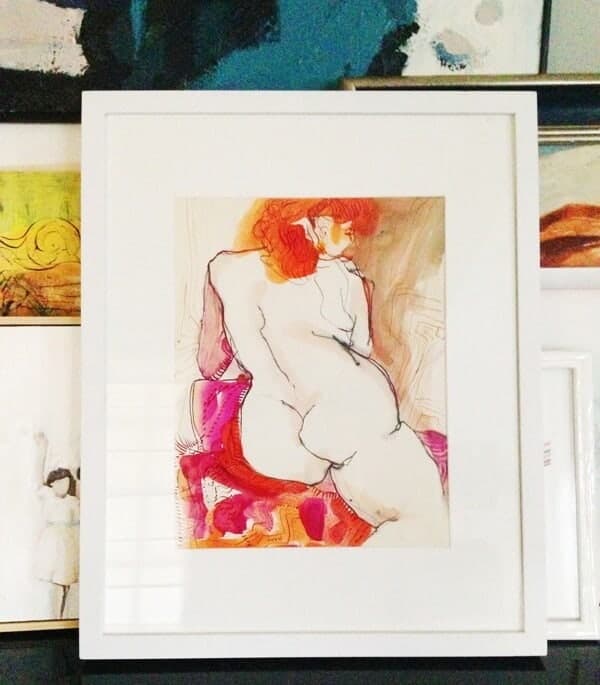 Whereas this watercolor of a nude lady excited him MUCH less. Like about as much as me wearing princess sleeved shirts with long skirts a la Sister Wives — not at all. I framed it real quick in a readymade from Aaron Brothers that happened to fit. (I MUST spend less on framing, new goal). I love the colors so much and it’s totally weird (and was $10). (yes, i just edited that part of the post:)) 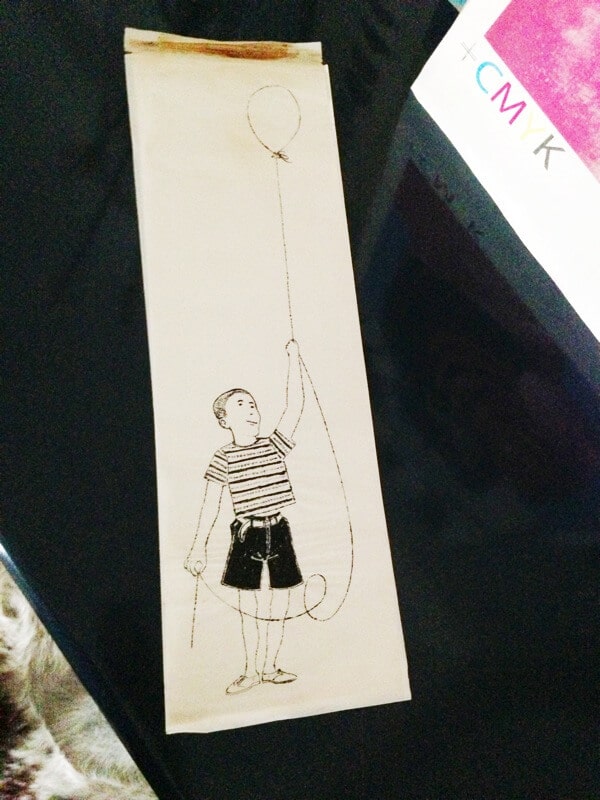 Last but not least is this drawing of a boy holding a balloon. It’s painfully sweet. I’m hoarding it for a baby’s room, for sure. I love the scale  (if you ever see strange proportioned art that you like grab it because it mixes in so well with traditional rectangular art), and imagine if I colored in the balloon in a bright color? Oh yes. $10.

So that’s what I hoarded from the flea market yesterday. Which is your favorite? Sub-question, do you think I paid too much for the brass hand lamp? Would you have?