Brian and I kinda promised each other no gifts this year – what with the baby and the house and the lack of really needing anything … but then i got to pinning gifts for him and well, this happened. Unfortunately he is still refusing to let me buy these for him despite the fact that he would actually love all of these.

1. Hedley & Bennett Apron  – he likes to cook, but be kinda macho about it. | 2. Whale Stapler  – for his desk, obviously | 3. Shoe Shine Kit  – because real men shine their own shoes | 4. Sphere Ice Mould – for those whisky nights especially in the winter | 5. Seersucker Classic Tie | 6. Leather Adjustable File – ‘dude’ office accessories will make him psyched to sit down for work | 7. Cashmere Hat – a luxury he would NEVER buy himself | 8. Leather Pencil Case 0k, he won’t get this but i love it. | 9. Nylon Cordura Bag for an ‘dude’ diaper bag? 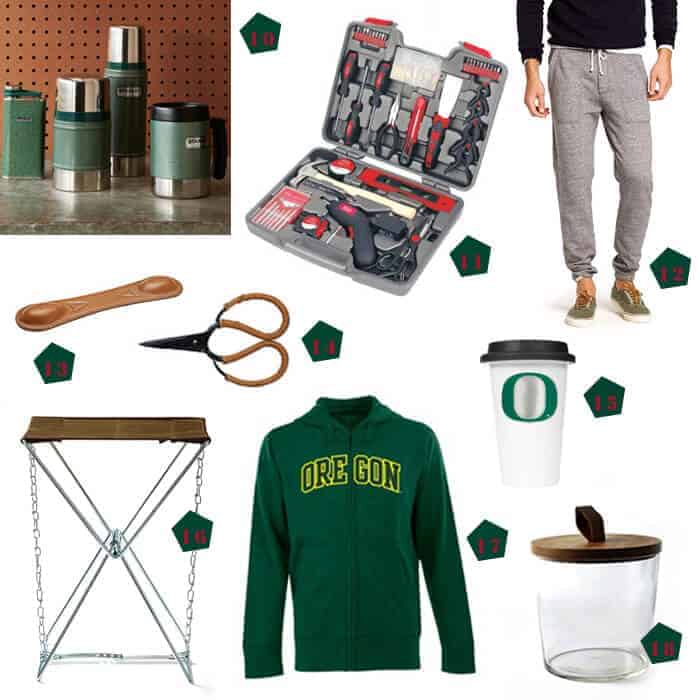 10. Stanley Thermos – we love coffee very much, in the car or not. | 11. Tool Kit  – because he is sooo sick of me never knowing where mine are so these would be just his. | 12. Slim Sweatpant – because we are super cozy around the house these days and he needs more comfy clothes | 13. Bookweight  – he can hold/rock Charlie while reading | 14. Leather Handle Utility Scissors  – yeah, another one he won’t ‘get’ but I love.| 15. Ducks Coffee Traveller  – again with the coffee | 16. Waxed Canvas Camp Stool |17. Ducks Hoodie Don’t mention the ducks year this year, but he’s still a massive fan | 18. Wood & Leather Ice Bucket – Yeah, so dude and so great. 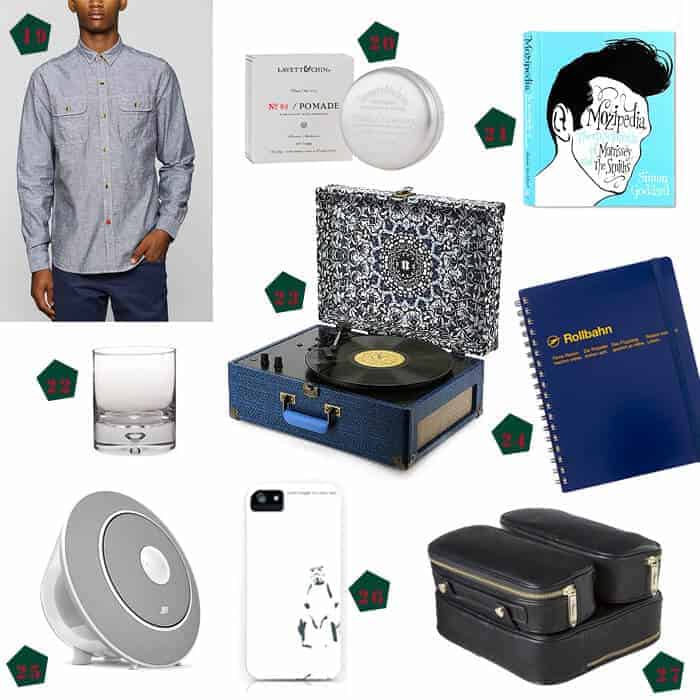 19. CPO Chambray Button-Down Work Shirt – He could wear this every day – work or play | 20. Lavett & Chin Pomade – the man loves his hair cream | 21. The Encyclopedia of Morrissey and The Smiths – because his teenage self really indulged in this music | 22. Galaxy Rocks Glasses – I’ve never met a man who appreciates a heavy rocks glass as much as that man | 23. AV Room Portable USB Turntable By Crosley  – because he’s a man and therefore by definition he wants a turn table | 24. Notebook – so he can retire his lame drugstore versions | 25. JBL Voyager  – so he can play his music via wifi anywhere in the new house | 26. iPhone Case  – because he’s been eyeing this for a long time and loves Star Wars very much | 27. Dopp Kit – he refuses to admit that he needs one, but the man needs somewhere to put his dopps.

So those are all of the things that i want to get him. Unfortunately he won’t let me. So what I’m going to get him instead is a day off of daddyhood some time this year – with probably two rounds of golf for him and a friend, and an uber ride there and back. Now THAT, he can’t argue with.

50 Comments
Oldest
Newest Most Voted
Inline Feedbacks
View all comments
Our sites use cookies to improve your experience. Learn more