For someone as in love with “love” as I am it seems totally weird that i’m not super into valentines day. I mean, I love LOVE so very, very much, you guys. The fact that I self-ration my viewings of “The Notebook” to once a year so I don’t get sick of it should tell you something.

In fact, you should not be surprised if I come out with a romanice novel in 20 years. I’ve always wanted to write one. I’ve read hundreds of them and I think I could tell an epic love story.

But Valentine’s day? Meh. Part of it is my inner rebel that doesn’t like to be told what to do, but most of it is sheer laziness. We normally think about it around 6 pm and are like, “Did you plan something, ’cause I didn’t?” And then we’ll go out to dinner and maybe watch a movie. But while packing for our move the other night I found this card that Brian gave me ten years ago that made me totally lose it. I mean, just writing this again I’m losing it. Not in the ugly face kinda crying, just happy tears slowly streaming out of utter gratefulness and yes, love.

Let’s face it, there are a lot of drawbacks of finding your “person” so young. We knew it when we met. We were like, “Ah shit, this wasn’t supposed to happen for years.” We broke up twice to help up experience the things we should in our 20’s.

Anyway, Brian made this card for me when I was 23 and totally lost career-wise. I was living in New York, bartending at night, walking dogs during the day, and taking furniture design classes at Pratt. I had no idea what I was going to do and I didn’t feel like I had the right to identify myself as anything. So he made this card out of labels, writing all of the things that he thought I already was on them. 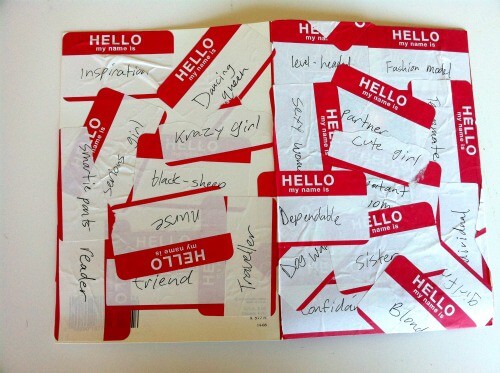 I’m not sure what “nurse” meant. Or “fashion model, ” but he was right with “black sheep, ” “krazy girl, ” and “dancing queen.” Guilty. It was all my identities.

On the inside was this:

A loose label with “artist” written on it was inside, unstuck. He wrote that he hoped someday I would “allow” myself to put this on, too. I remember when I got this card I started crying because I knew that I wanted to be an artist, but I had no idea what that meant. I didn’t know how to paint, I didn’t have the patience to be a sculptor, and I literally couldn’t draw a cube. I wanted to believe him so very, very bad, but it seemed totally impossible and I refused to believe that I could be an artist. God, just thinking about how frustrated I was makes me cry again. Today is apparently a crying day — that’s cool.

It’s just so incredibly sweet. He was 23 when he wrote this. He was in grad school for acting at NYU and he was 100 percent sure of what he wanted to do, and I was 100 percent lost. 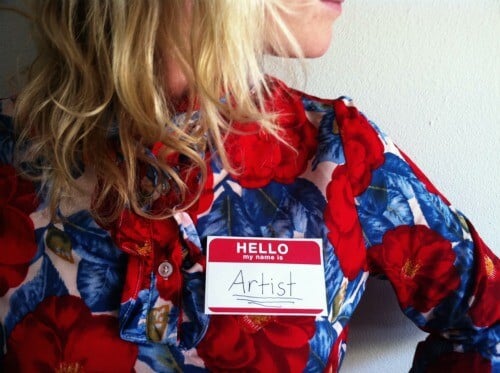 Thank you for knowing the things about me that I didn’t.

And thanks for being hot and nice, funny, talented, and smart. Those all come in handy as well.