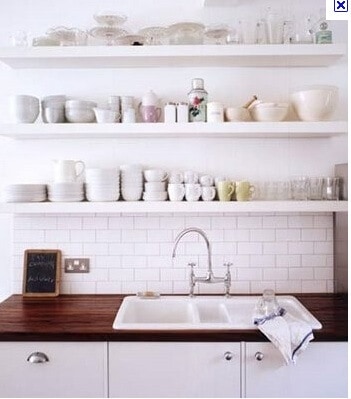 for me to put my pretty things in.

My friend just bought an awesome house with a dated kitchen that we need to update with not a ton of money.  It’s from the 1920’s and he’s into vintage look, yet modern – or  i’ve convinced him that he’s into that, because that’s what i’m into.  The house closes tomorrow and then i can take pics, but being obsessed with the task i’ve already found some tears to show him.

His kitchen already has subway tiles, so we could just replace the shelving and countertops and have it be affordable-ish.

This one above is pretty, but too country.

This one is pretty beautiful.  It feels old and new at the same time.

These photos were taken by Amy,  obviously.  And she designed the house, because she is super woman, apparently.
Serious question for you:
I need to find a contractor for my friend to do the work that he needs done.  Does anybody know anybody in LA that they feel good about recommending?