Its so much easier for me to start with my regrets.  But that’s lame. So heres what I love:  well, the sofa.  no doy. Then the rug.  OH my that rug wouldn’t been the entire budget, but the Rug Co loaned it to us and it was beautiful. It was a greek key pattern, silk, white and so luscious, soft and reflective.  If i ever have an extra $10, 000 and no kids, pets, friends and i never eat, drink or go outside, then i’m totally going to buy that rug.

I wish I had not done all the white lacquer. Here’s why I did it:  The budget is a certain amount and i have to dictate how much of it gets used in the first look.  It was hard for me to spend money on stuff that ultimately wouldn’t stay in the room, So I didn’t.  The two side tables were picked up for $90 at a thrift store, then sprayed white. The coffee table is kinda great actually, I got it at Grot in Long Beach.  And the credenza was from Pepe’s on the west side, then sprayed white.  I actually like them all individually, but all of them together looked like a set, which is totally fine, but not totally my style.  The room looked VERY put together, which is often what first look is, then it gets shaken up for second look.

And for all of you who are wondering, that tile is most certainly NOT original. Its originally late 80’s, and originally ugly, but not original to the house.  Don’t worry.  So far i’ve managed to not  paint over anything original and once when a family asked me to get rid of their floor to ceiling 60’s beautiful stonework around their fireplace because it felt ‘old’ i said absolutely not.  wrong person for that. 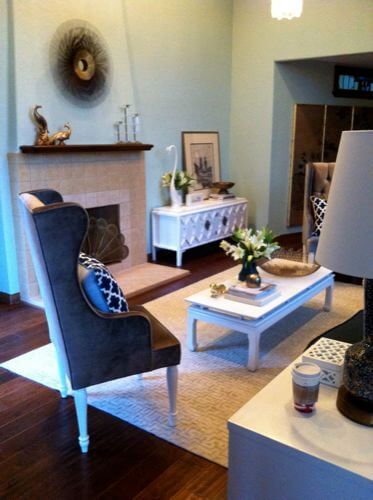 Anyway, the wingbacks were from Room Service, sorry about the discrepancy on the show, it said they were reupholstered, when they were purchased and the store deserves credit – i didn’t catch it fast enough to change it, but it was my fault.  The metallic pllows are Room Service and Crate and Barrel.   The Japanese screens were from Peter Vanstones antiques in Echo Park.  And the accessories were flea market (except for the west elm vase).

And for the record the chairs are angled so the photographer could see them (the set photographer, not Laure) but i had put them straight on.  I’m picky with angled furniture. 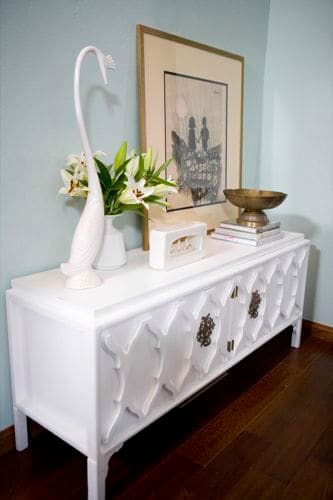 That swan and the gazelle vase that you can’t see but is amazing were both purchased in long beach at a vintage store.  And that drawing by somebody famous that i can’t remember, was Hillary and Bobby’s already and is hiding the already installed TV electrical.

Overall i liked the look for a hotel lobby, or a formal living room.  It was grand and had a lot of high contrast and high style.  But it was cold and as Hillary put it, you felt like you had to put makeup on before you went inside.

Questions, folks? Do you like look 1 or look 2 better?

ALSO UPDATE:  YOU CAN WATCH THE PREMIERE ONLINE!!!! GO HERE.