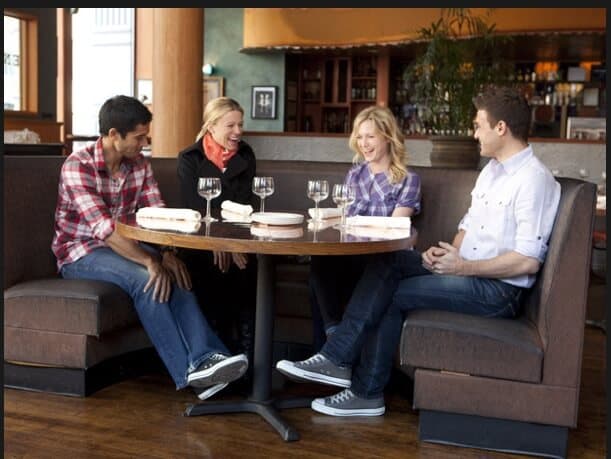 Alright.  Dining room repurposing challenge.
So we woke up and got the call from Vern that we were to go to brunch.  hmm…. strange, but ok. i do love brunch almost as much as ‘linner’ or ‘dunch’.   (I also love ligers and tigons a little too much)  I’m into being out and being served food, but wary – i’m no dummy.  The food was delicious, and eating in front of 6 cameras and 20 production members and trying to ‘act natural’ was strange and surreal to say the least.    (i suppose the housewives get used to it, b/c its weird)
So we finish the four courses and Vern Yip rolls in and steals our buzz.  It’s wasn’t just an innocent brunch with 6 of our closest producers standing around, It was also part of our challenge.  We kinda figured – four courses, four of us and cameras everywhere – this wasn’t Intelligent Star (thank god), but we were smart enough to figure out something was up.  Michael and I are teamed up.  We totally got each other, we had fun and trusted eachother, taste-wise.
We got into the space and my little brain started a- thinkin’.

I loved the creativity that this challenged forced.  For a lot of the other challenges we had pretty pieces of furniture that ultimately go back to the store, so obviously we couldn’t paint them or deconstruct them.  And for this one, we could go nuts, all Martha Stewart style.

As far as our plan:
Michael and I felt that our food was similar in a couple senses:
They both have bursts of flavors, brightness, lots of textures and acidity.  Yep. I’m well aware of how weird and frankly idiotic that sounds, but i didn’t embrace the ‘garlic’ challenge at all and I almost went home, so look at me now, getting all ‘huevos rancheros’ on you.
So this is what we came up with:
Bright acidy colors – greens and yellows, but grounding it with light grey and accenting with charcoal, black and white.  While this isn’t what I would do in my home, I channeled my two years working for Jonathan Adler and we kinda envisioned this:  (left JA, right Kelly Wearstler)

Uh, i think they would’ve won this challenge, but with more time….
We painted the walls a light grey (BM grey owl, i think) and the ceiling  a bright green.  It’s not that nuts, i promise. There just wasn’t enough art or a rug, so the balance was off  (i’ll get to that).
unlike these:

Then we painted the armoire and the wingback a charcoal grey (yes, we painted upholstery, and while it will probably flake off eventually, it looked great).  We painted the chairs out a high gloss white and reupholstered the seats in gold faux bois fabric.
(all our fabric was from  Zarins)
I spray mounted the inside of the armoire with the forest fabric, and while I wish i had time to style it (i actually just placed the stuff in and never had the chance to arrange them at all) I think that it is cute. I’m well aware of how trendy it is, but Its good to show the judges that you understand trends too, and it definitely reads bigger than all my subtle styling moments throughout the competition.

By the way, i know there is a big war out there on the blogosphere of when to paint out furniture and when not too. My opinion? if its crappy wood and less than 30 years old, you can paint it. But if its antique, hand-built and hardwood? Good god just restore it. Add new hardware maybe, and a less glossy varnish.  So many pieces of beautiful antique furniture are stripped of whats so great about them when diy-ers paint them, stencil them, whatever.  Its like trying to make an 85 year old woman look like Christina Aguilera – the more you try to cover up the age, try to make her look young, hip and shiny, the more ridiculous she’ll look.  Just help her be her age and pretty – a blow out and some lip stain.  that’s all she needs.
Just my opinion, since you asked.  er, since you’re here.
MY, MY I DO DIGRESS, DON’T  I.

If you’ve read my blog enough you might be aware of my serious obsession with flowers, so I gravitated to those plastic things pretty fast. I built this rectangular shade out of pine furring strips and nails, which was actually super annoying to build and took a couple hours –  a la Faulty Towers.  Then covered it with drop cloth, and adhered the plastic flowers with a glue gun.  I still love the concept, but the prototype needed some work.  If it was porcelain like this: 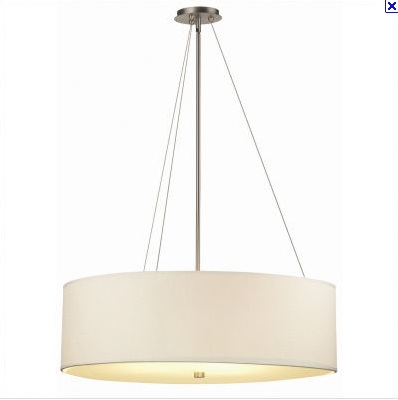 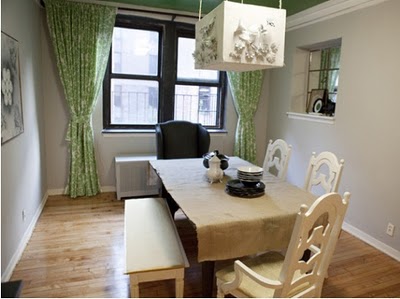 eh?  its the thought.
I sewed the drapes, and YES! i wish i had not tied them like that, I don’t know what I was thinking.
the table was styled with some painted black and white plates – but we needed height, and I wish i had made napkins out of the green fabric.  I like the wingback chair and mix of chairs/bench around the table, mucho.
But the room is off balance a bit.
The ceiling was heavy, and we have very few things for the walls/floor.  We were desperate for a rug so i started to paint the existing terrible one, but it just soaked up the paint and was a total disaster.  I wish granny had a black and white greek key like this: 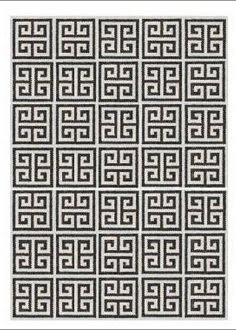 or maybe that’s too hollywood regency themed.  Maybe more like this: 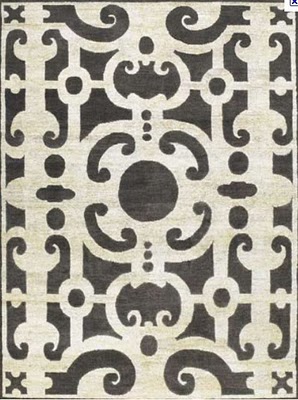 That one is from Mansour Modern, one of the best rug stores in the world, especially if you are a bazillionaire, because she ain’t cheap.  Thank god i’m a bazillionaire.
So here is our final space: 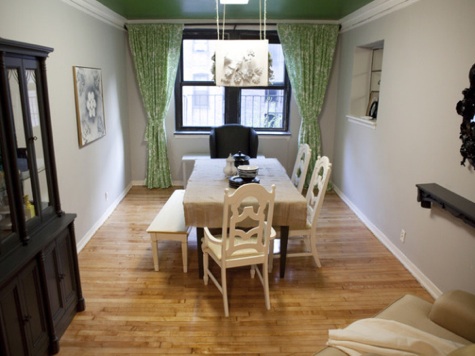 Disregarding my bad art on the wall (weird doily mistake) there is nothing in here that I didn’t like.  That being said, I wish there was a lot more going on – we needed lot of artwork (and a rug, obviously).  If we had 5 more hours it could’ve been a really great space – it just needed life. To contrast with the high gloss, we put burlap on the table (which commenters online are hating) and I think it created a nice texture juxtaposition.  and i say things like ‘texture juxtaposition’ now.  weird
That’s my story.
Courtland is out.  His sconces were awesome and totally inspired. He will be missed.  But he lives in LA, so i think that’s not the end of him on TV.  While, sure, we have kinda different hosting and design styles (not sure you could call my hosting a ‘style’) he has a definite huge audience.  And I would be one of them.
FINAL THREE!!!!!
Next Week?
INDIVIDUAL CHALLENGE –
2 words I never thought I would be so happy to hear.