So here’s the general process: I meet with a client and bring a bunch of Dominos and Elle decors and we go through them and talk about what they like and what they don’t like.  I find that since most people don’t have 300 back issues of shelter magazines to pull from, when you ask them to pull pictures that they like, it generally doesn’t end well. They end up going to weird web-sites and pulling catalogue pics – because its hard to navigate to find the really inspiring pictures.  So, showing up with 100’s of my favorites gives me a better start and generally gets them more excited.  So we went through a few and these are what Andre and Lauren liked: 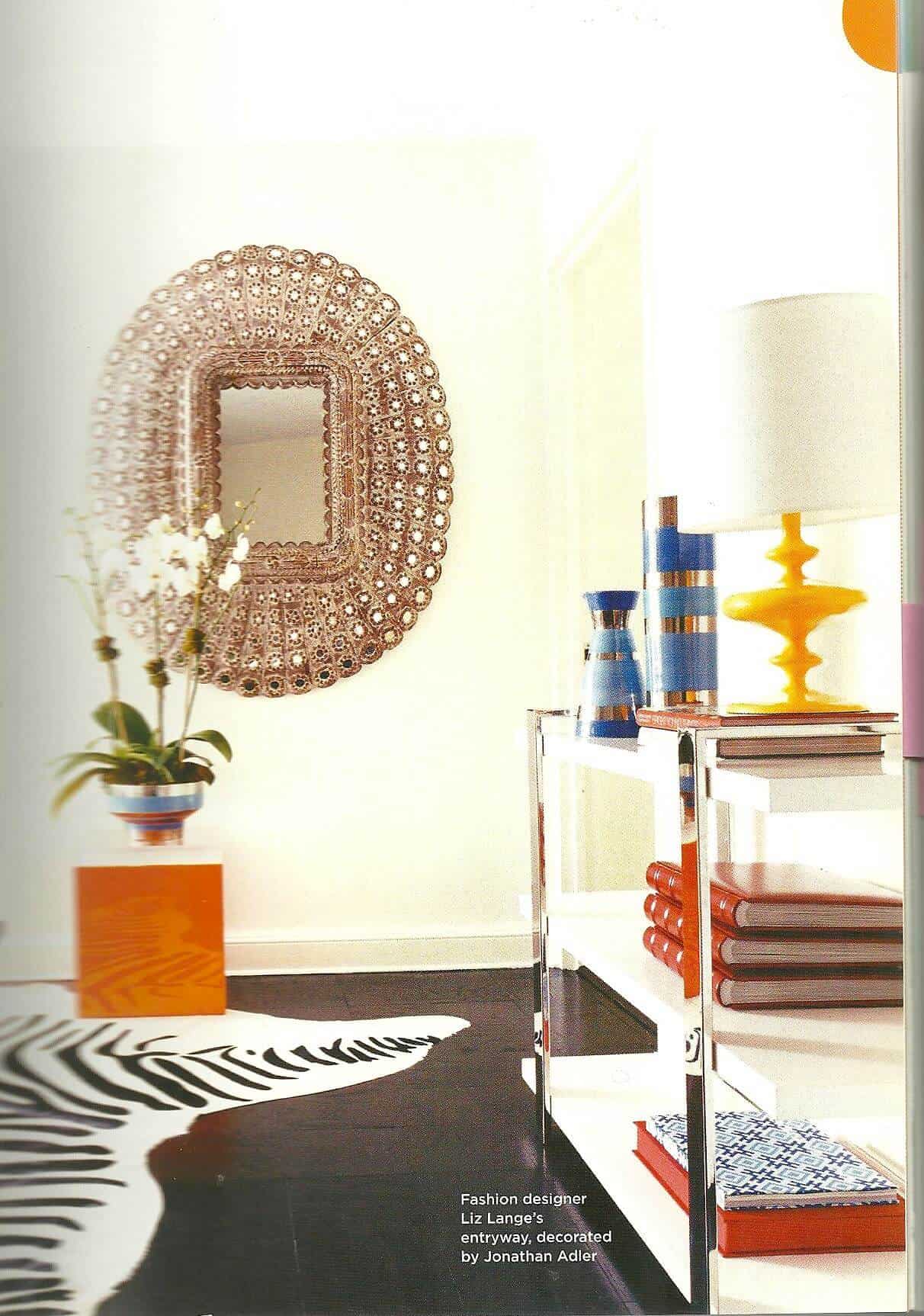 They liked the color palette and the unique mix of finishes, and they  loved that coffee table.  They also really wanted it to look appropriate and work well with the Spanish architecture of the house. 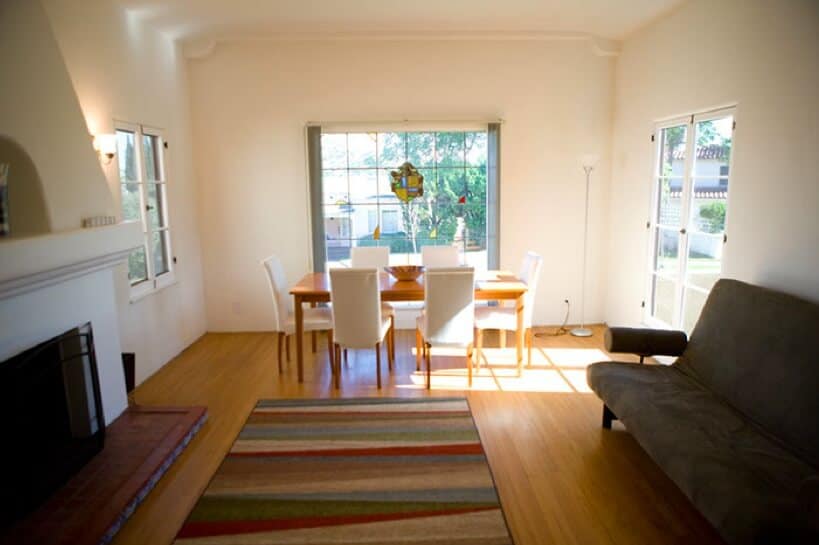 They were a good case, of not knowing what they do like, but being really opinionated about what they don’t like.  And i appreciate the any and all honesty. I had decided to do something different with this episode and do the house’s style first.  Andre and Lauren really weren’t that far apart style-wise, so doing their house twice was gonna be hard.  And i’m not the biggest spanish style fan, so i thought it would be a fun challenge to do it in a tasteful way.  I’m not strict about the interior design matching the architecture, but if you can make it work, why not? 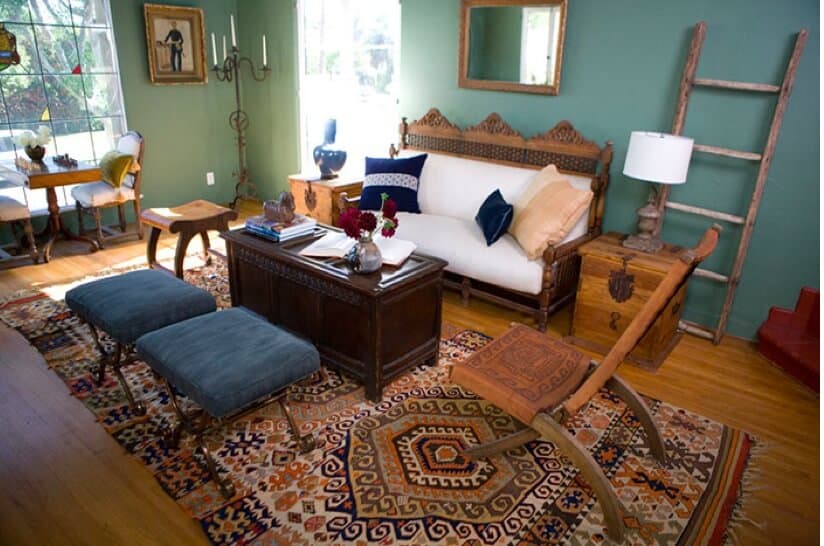 Let’s do some resources:

Sofa – rental from Santiago’s on Lankershim, i think you can purchase it for $700 – its beautiful but you don’t really want to sit on it.  More of a ‘looking at sofa’ than a ‘sitting on sofa’.  I would love it in an entrance or a foyer, but not in my living room.

Rug:  rental from TJ Gurley (where i shopped for first layer). I LOVE that store. They have a great eye (s) for beautiful pieces which range from spanish to french to industrial to weird architectural found objects.  The rug is $1000 but its really beautiful, but totally patchworked together.  And that’s where the Don Quixote painting came from (i think its $600 or $1000, not sure, we borrowed it).

The x benches i got from the rose bowl, but they came like this: 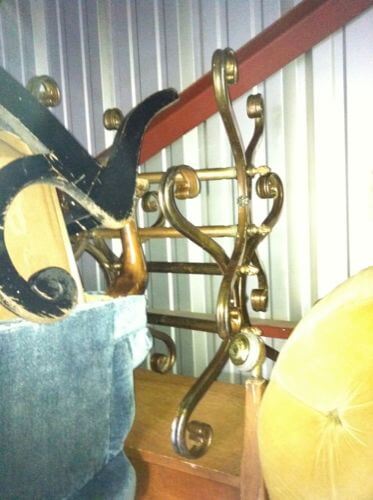 yeah, i know. hard to tell what they are.  They were under a bunch of stuff and were $20 for both. I had the tops made for $100 each which equalled some pretty cheap x benches. 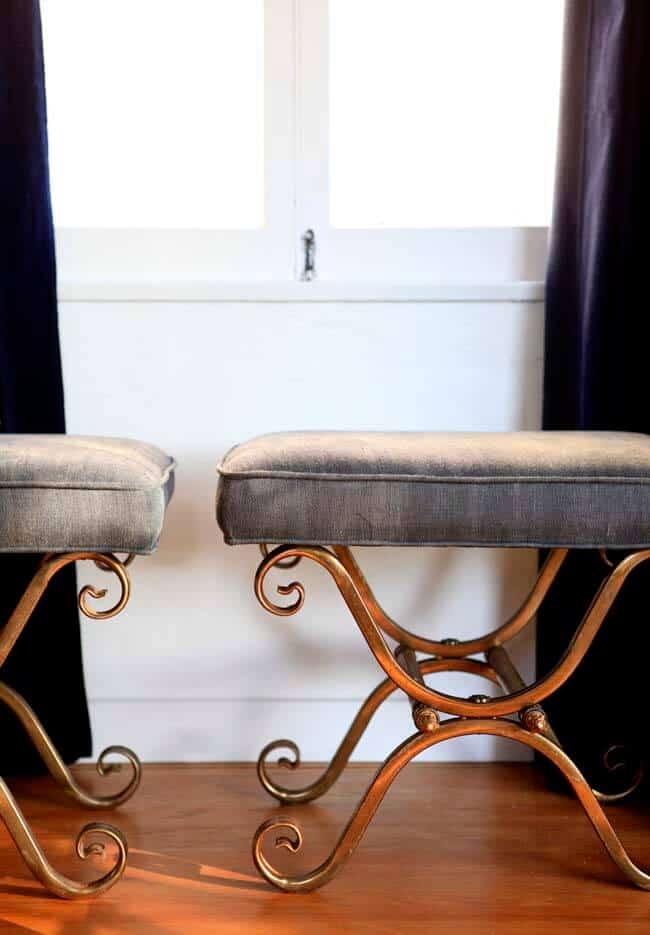 But Lauren and Andre didn’t like them.  wah wah.  THey did once they were in the second look , but not the first.  Goes to show how changing the context of pieces completely changes their personality.

The chess table came from the Rose Bowl, $175 (it opens up and holds all pieces inside and turns into a backgammon board), the chairs were from the rose bowl and were ancient and pretty much falling apart, but they are really pretty.  The coffee table/trunk was a rental from a prop house, the chandelier was a flea market find for $200 and YES, lets talk about this: my theory is that the lighting or architectural features of a house should match the style of the house. NOT all the time, but its something to shoot for. But Lauren and Andre hated them, and she’s a lighting engineer so I felt like i should change them.  In retrospect i wish i had left them, they looked so appropriate, like they came with the house, and the second look needed some more aged pieces. 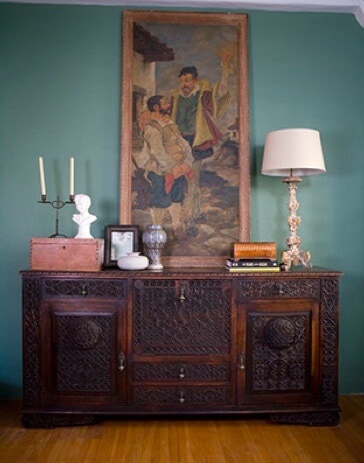 Ah yes, the credenza.  My favorite piece.  It was a splurge at $1700 from Grot in Long Beach. It was meant to be turned into the media unit….Lauren and Andre were planning on buying a flat screen that we were going to put on top, but it didn’t happen before the show (which is why the sofa is oriented towards that wall).  This piece is insane, the hardware is so beautiful, and the carving? forget about it.  So pretty. 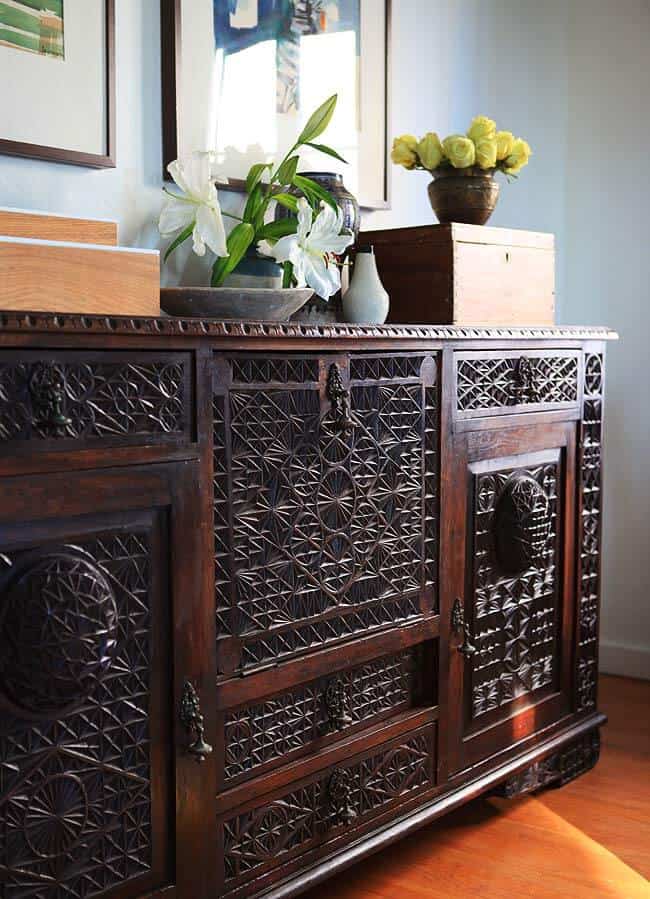