Rustic Mantique, eh? what, do you not like mantiques? sometimes i get my bro’s together and we hit the mantique mall, then we might hit up the brodeo, go to the reptile store and hold some broaconstrictors. In general we have a lot of, go ahead emily, Brodak moments.  Yes, being raised in a ‘clean’ house does mean that humor often lies in the pun.  and i like puns.  because they are punny. uh huh.

You’ll see throughout the season that some style dubbings are funny, some are kinda stupid (one even got changed post shooting because i got desperate and said ‘mid-century stew’.  Gross.)  and then some are just straight forward but playful.  I’m saying ‘Rustic Mantique’ is one of the pretty funny ones.  And it totally says what it is.  ‘Easy Rider’, for instance, (which comes up later in the season) is kinda abstract.    Everyone gets a visual when you say ‘Rustic Mantique’.

Anyway, the style diagnostic isn’t always perfect.  I actually totally regretted doing the rulers….and kinda the frames, too.  I truly think that it still says something about your style, but after this episode i made sure to have them be a little more design related so we don’t start going down the gimmick hole.  I effing hate the gimmick hole, and the style diagnostic is tricky already so i’m always mindful of it making sense.

IN FACT@@@@ You guys should give me ideas!!!!!!!!! i mean, we do three different visuals per episode and my little brain has enough to think about so any and all help would, well, help.  i love fabrics, fashion, fixtures, finishes…..but then, whoops, ‘RULERS??’ any ideas you can think of send my way.  And if we do them, i’ll totally give you a shout out (unless we already shot it…in which case i’ll try to remember to anyway)

That’s probably why the diagnostic failed for Amy – the rulers and frames weren’t totally conducive to real design styles.  She also didn’t like any of the femaile sweaters, she liked this grey and white one that was one of the male ones, which actually made sense for here.   Anyhoo, Lets ge to some sources: 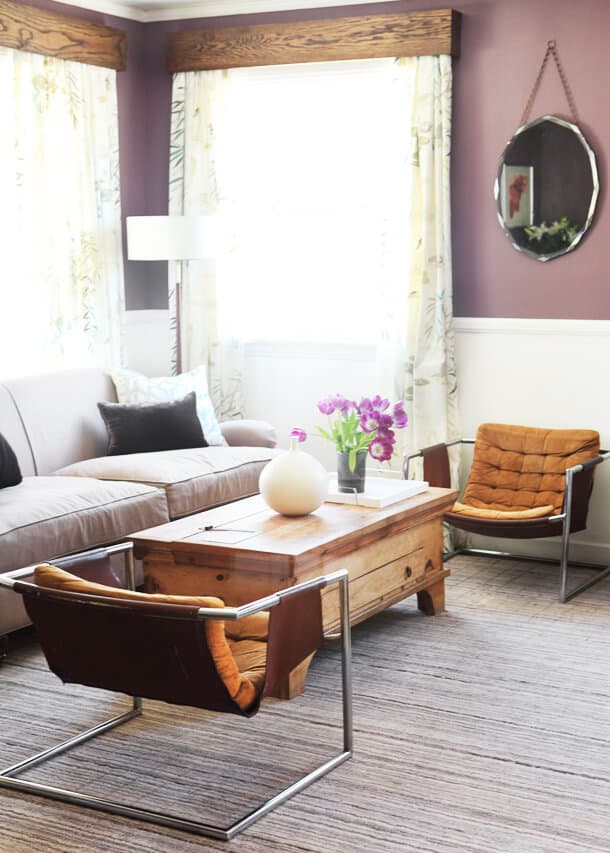 That awesome wall color is Benjamin moore, Vintage Charm.  I love it.  In the first look it looked really dark and rich, then in the second look (same color) everything seemed brighter with the drapery and white chair-rail.

(ugly photos by me, sorry.  that’s the difference between a good photographer and a crappy one. which is why i pay for a good photographer, by the way…there is just no time to do it for first look before we break it down…plus there are a ton of filters on the windows, no daylight…yadda yadda)

lacquer and chrome table:  Blueprint furniture, i think it was $299 or so, but we bought a slightly damaged floor model for $100 since it wasn’t in the plan for it to stay for the second look.

The sofa was blueprint as well….although i’m not the biggest fan of the fact that it goes slightly peach.  Kinda weird with the coffee table, but they loaned it to us, so that sure was nice.

The grey drapes are Ikea, and the chrome lamp is vintage.  The white side table (which goes ‘store display’ or ‘gallery’ real fast by the way) is from CB2.

The chrome chairs (with the leather sling) are NOT Milo Baughman, my expert friend told me.  The lucite nesting tables are CB2, the shelf is BluePrint and all those objects are collected by muah.  There is some West Elm, Room and Board and vintage stuff mixed in there.  (that white dog is currently being babysat by muah…(and i know thats not how you spell muah by the way, i just don’t know how to do that little accent thing).

White vessel is vintage, mirror box is West Elm, white lamp is Ikea, and the fur, which probably shouldn’t have been there so you can see the beauty of those chairs, are from Ikea.  which you all knew, of course.

Ok, first look dining table – that cheap thing from Ikea.  it was a budget saver cause it was left over from another episode, so it was perfect for first look.  The bertoiia chairs came from the Long Beach Flea Market, and they were in the plan to stay for second look, but Mike really didn’t like them.  He said they looked like fast food chairs that you could hose down when kids get food on them.  I totally appreciated his honesty.  And i totally appreciate their chairs, so they couldn’t stay.  He has since apologized, and we are all good.  The captain chairs and barcart were from the Cathedral City store…God, i can’t remember what it was called, but its good.  On that little strip….sorry…

The cow-hide sadly was mine, but whatevs.  I find them all the time, so now its their’s.  Oh and do you want to know a secret? cow-hides and kerazy durable and stain resistant.  Not kidding.  Dirt/wine/blood (my kinda party) wipes right off them.  That’s why i love them so much (also they are sculptural and affordable.)

The tree (which didn’t make it in the episode very much) was a beautiful drawing that Mike’s mom did for them when they got married. If i’m not mistaken it was two trees on the property where they got married, joined into one.  Like them.  So sweet.  So we blew it up, times 10, and built a frame for it.  I thought that they would love how graphic and clean it was, on such a larger scale. Nice job Rebecca and Leo for taking over that project.

The chandy? first of all here’s a secret, i have a weird problem with lying about how much stuff is, and then immediately apologizing for lyiing and telling the truth.  It’s TOTALLY bizarre.  I’ll buy a lamp and come home and tell Brian that it was only $12, when really it was $15.  I mean, why the lie? and then i’ll IMMEDIATELY say, wait that’s not true it was $15, and he’ll say, you are weird.  Which i am.  So this chandy was i think more than thirty, maybe $45 but i think i felt bad painting it so i wanted to act like it was worth NOTHING so i could not feel guilty about painting it.  Had it been $150 i would have NEVER painted it.  It was from the Rose Bowl and yes, i still have it in storage if anybody wants to make an offer.  OH, that’s another thing that was planned to stay but they really didn’t like it, so i brought in the crate and barrel one for look two.  (post tomorrow…or wednesday)

Anyhoo, that was first look. It’s really pretty, just not really them. i liked it a lot, but was excited to bring in the beautiful drapery and more wood that was planned for look 2.  Nothing actually in the plans changed, EXCEPT those chrome/sling chairs were going to be changed out with a chair and ottamon that was wasn’t nearly as exciting but a better scale (those chairs are kinda out of scale with the second look sofa) but since they loved them so much i wanted them to have at least a few things that they were guaranteed to like.  So that’s why they are smallish. The chairs that were planned went back to the store, and no, i’m not going to tell you where.  That’s my secret.