ALright alright.  So here is what the Osbornes needed:  a living room where they could watch tv, but felt grown up and sophisticated.  When i first saw the house they had just had a dinner party and there were folding tables in the living room, they had a eat-in kitchen area for the family, but they like to throw dinner parties a lot, so they were kinda sol.  The challenge was that the fireplace was too high to put the tv on top  – some people don’t care, but for them it was off the table – and the fireplace wasn’t functional, so its not really a focal point. Sure, its interesting architecturally, but orienting the room around it would be ignoring the functional needs of the family.  So while it does seem weird, thats just what i did to make the room work.  And as far as the tv goes, there was no where else to put it – there were a ton of windows and i like how when you walk into the room you DON’T see the tv  til you turn around and sit down to watch it.  The entrance to the room is to the right of the tv so its pretty hidden and lets that massive pretty window get a lot of attention. 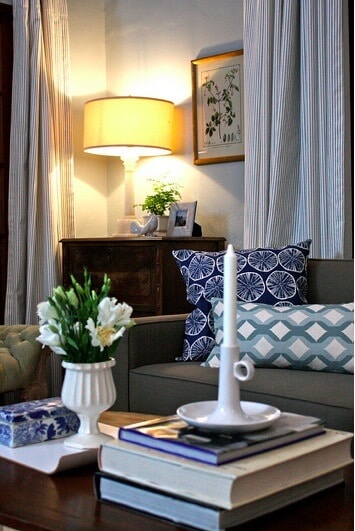 I love this couple. She is snarky and funny and Southern but with a lot of attitude, which i respond to.  She reminds me of me a little where on first impression people think i’m super sweet and innocent and then upon knowing me…well you guys know me well enough to see the bite.  although i have tames down the blog since Design Star….for obvious reasons.   Anyway, Nick is adorable, funny and such a cute father and loves his edgy southern rebel wife so much. 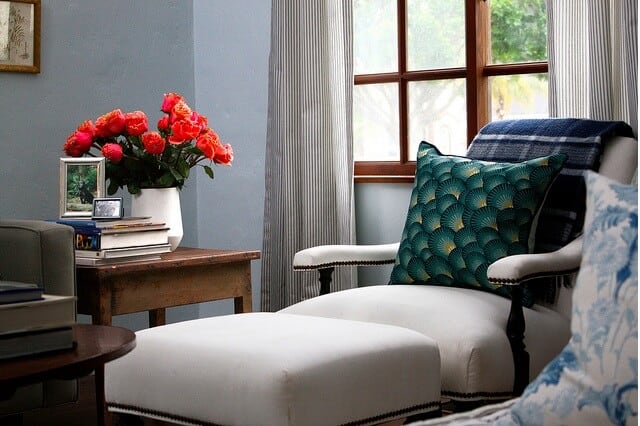 Drapery – NOT $20 a panel. Sorry about that.  I get them sewn for $15 a panel which is amazing. it’s a place that does a lot of hollywood movies so they whip em out for nothing.  $3 more to line them. its insane.  But they are to the trade, and most upholstery places start at $60 per panel to sew. The yardage alone was $20 per panel so that must be what they were referencing ($6 a yard).  So i’m sorry if that was mis-leading.  In the later episodes i see them before the episode is locked down so i make sure they are accurate and not my deals.

amazing bench ( i really really love this bench) i saw at the Long Beach flea market, but it was sold. Turns out it was sold to my friend, Staci, who owns 45 three modern vintage (which is one of my all time favorite stores) and so i ended up buying it from her.  It came without any padding, and i can’t for the life of me find the before picture. 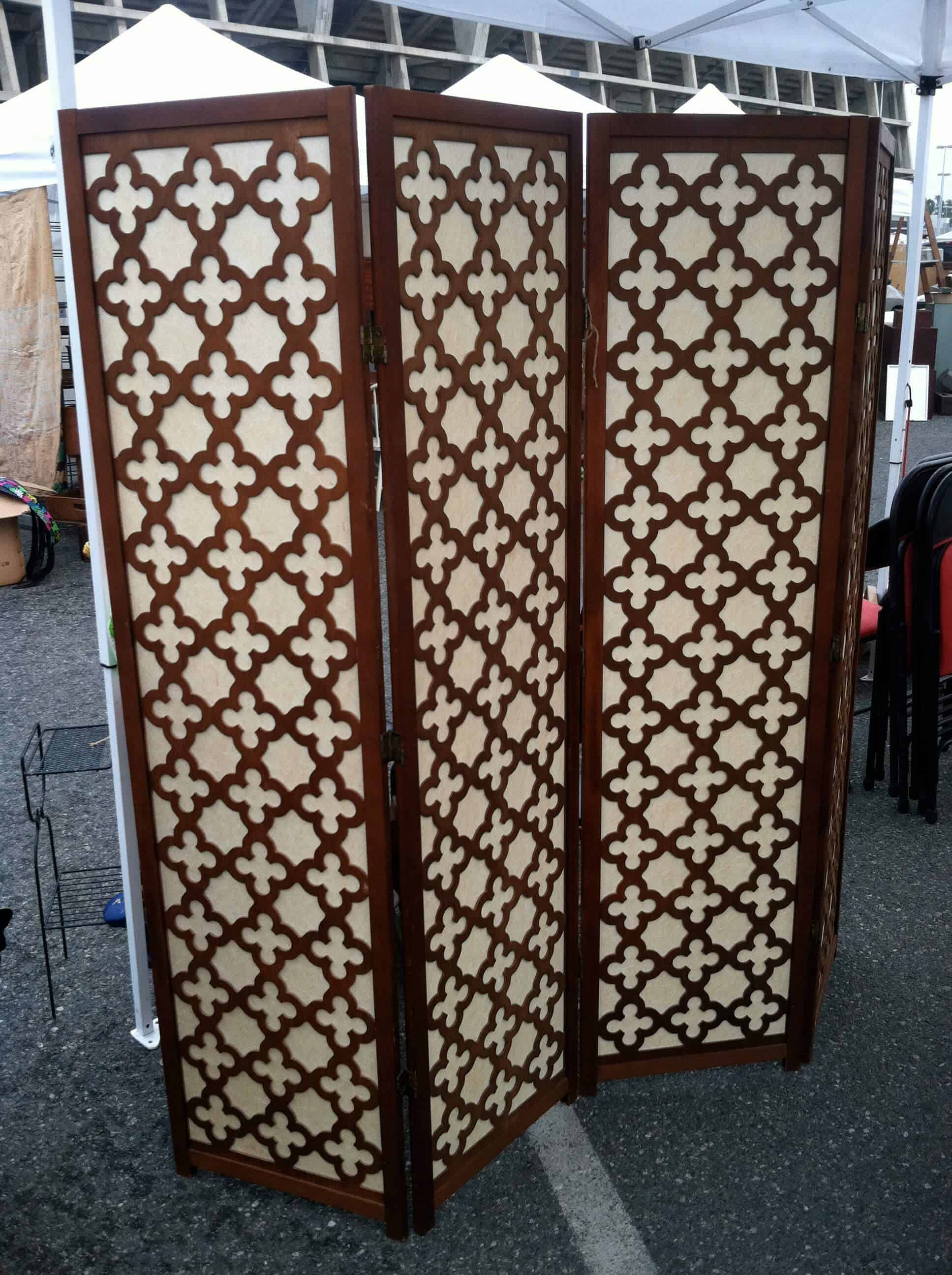 It’s early american – not totally sure if that means 18th century or 19th century but its crazy old.  So i wanted to upholster the pad in something appropriate to the era, and a large scale ticking stripe kept it modern and masculine.  ish.

I wanted it to look like one of those old timey matresses – with the large box piping and the tufting.  I love how its really old and antique while still being clean lined and not ornate.  And the scale of it was perfect for this room.  I think it should have been flipped around the other way for the show, even though for their function (to watch tv) they would probably have changed it back.

Lets see, to answer some questions:

1. i didn’t like their previous sconces – they were faux aged 90’s wrought iron, NOT original to the house.  I knew that i was going to replace them for look 2, so for look one i just painted them so they would disappear. which made some of you unhappy.  I wish we hadn’t shown a close up of it, because they didn’t look good, but they looked better than they did before.  But don’t worry, they were NOT original.  like 10 years old and gross.  I will say that a fault of mine is that its hard for me to do anything to the original state of the house that is permanent.  Whenever i see painted hardwood flooring like this: 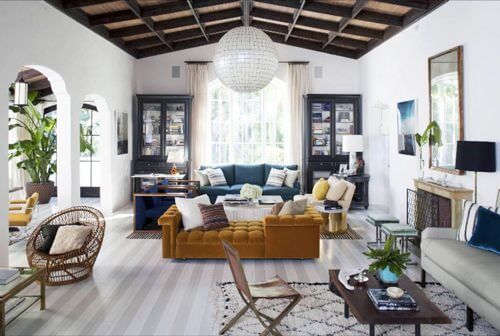 I mean, this room is so perfect in so many ways (by Nate Berkus who i dreamt about again last night, by the way, so weird).  But he painted stripes on the hardwood flooring and it looks amazing.  Im trying to grow a pair, but for now when the house is so old doing something really permanent to the architecture (like painting over brick or exposed stone or painting the floors) scares me.

FYI in this house the wrought iron and the beams were recently painted brown – they weren’t wood that I painted white and that wrought iron stopped your eye completely and was super distracting in a bad way.

2. i kinda over pillowed.  It didn’t seem like it while in the room, but on tv i wish i had like 5 less pillows happening.  Especially in look one, ick.

3. dining chairs were from HD buttercup and i think they were on sale for $85 but normally are around $100 – and they stock them in all wood toned, too. A pretty great deal for non-ikea, non-vintage matching dining chairs.

4. chandelier was from HD Buttercup, too.  it was around $900 i think, but it really was perfect for them, the space and their styles.

5. Sofa was from the Sofa Co. and i actually think it was only $1200 (plus $75 to treat it).  I’ve become obsessed with stain resisting sofas.  It’s like a 5 year guarantee and often they’ll come to your house (for more, i think like $200) and boom, you can relax on your sofa.  i’ll put up names of the company soon.