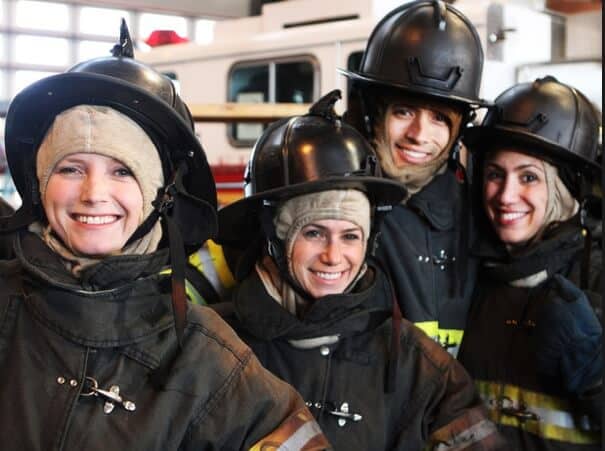 I had a friend once return from a world tour of Europe (er, a european tour of europe….) and when asked how it was, their response was, ‘amazing, just amazing. if you ever the chance, you really should try it’.  uh yeah.  ‘if i get the chance’ to take off a year and float around the world, i’ll totally ‘try’ it.  thanks so much for the advice.  now that i have the recommendation i’ll go ahead and book a ticket today.

if you ever get the chance to play fireman for the day, you should totally do it.

so fun, so scary, so hard to hold up the 30 plus pounds of uniform.  And that fire is hot, my friends.  When we were doing the drill it did start to get really really hot, but you can’t feel that much because of all the gear.  but the second i took off my helmet when i was far away, i could feel the heat and it singed my eyelashes it was sooo hot.  We weren’t terrified because we knew that obviously we were in good hands, but I could never do it for a living.  i’ll go back to sewing pillows.  in 72 degree weather.  with bearcat.

So this weeks challenge was to design a common area of a firehouse.  We were at firehouse 18 which is in the west village and super old and historic.  During 9-11 all the men that were on duty that day died on ground zero, and without killing your tuesday morning buzz i’ll spare you how sentimental that made me feel and just say that i loved loved loved our guys and it truly truly truly was an honor to get to know them and design a room for them.

Our furniture came from some online store that is below by canal street called ‘contemporary furniture nyc’ or something like that. They guys requested leather, because dudes be loving leather.  and they said that they don’t really like to cuddle with each other so club chairs were better than sofas.  so we bought club chairs.   six club chairs, actually.  But the store didn’t have any coffee tables that we thought could work (wherein i formed my ridiculous idea to build a table, because i’m a furniture builder, right? right? wrong).

So, the furniture came from the ‘contemporary’ store and accessories came from Surprise Surprise, which is a where NYUers buy dorm room accessories.  The other stop we made was a lumber store for lumber to build my coffee table, Casey’s canvas and Michaels desk system.  Those were the only options for shopping for anything.

For the record i drew a sketch of the table this time and while it is visually unimpressive, it isn’t going to fall apart soon, i hope anyway.  i’m not proud of the design of it, it did look like a kindergarteners table (thanks MFAMB  for pointing that out, i was was thinking 3rd grader, but i can go younger), but i am still proud of it.

In defense of my table:

Obviously my ‘signature element’ was less about a coffee table and more about what i wrote on it.  Inside the fire house the only decorations they have are what people send to them to thank them.  They are all over the walls, quilts, framed letters, pictures from kids classrooms, plaques, etc, etc.  Its unbelievably touching and totally appreciated by them – they care way less about the perfect accessories in the room and more about remembering why they do what they do.  The love from the public is a huge source of pride to them, so I wanted to give them my version of that.  You can go ahead and call that cheezy, i don’t care.  They lost 7 of the 21 guys in 9-11.  best friends.  so, no, I wasn’t worried about it being too sentimental for a reality tv show, it wasn’t about me.  I didn’t expect to win for best coffee table design of the year.  i just wanted them to like it and to hopefully make them laugh.

So I taped out the letters FDNY (sticking with our graphic theme) and wrote inside them, in black permanent market, then poly-ed the whole top so it doesn’t get ruined.  it was total stream of consciousness,  clearly i won’t remember it exactly what I wrote, but it went a little something like this:

‘oh, hey, squad 18.  wait, how did you get such big muscles, again?  i mean, the level of brawn in this house is ridiculous.  it’s almost as if you just hang around and work out all day, but nope  you are busy saving lives.  literally.  saving human being lives.  while i’m annoyed about having to carry 6 shopping bags, stressed about lampshades, angry at the long lines at ikea, you are running into burning buildings to save human beings.    Where normal men are terrified and run out away from fires, you guys run into them and that, well makes you so much cooler in my book.  Was it something you ate as a kid?  drank?  i mean, where did you get that bravery? ‘

‘I often contemplate dressing up in a cat suit (not like catwoman, more like a furry) and getting myself stuck in a tree just so you would rescue me.  And i know you would.  even though you could tell that i was clearly just a crazy fireman-obsessed woman, you would still rescue me because you are that nice.   But, I can’t help myself.  Because women, well, we love you.  and its not just the uniform thing, we don’t go nuts for postal workers.  its the bravery thing.  you can’t bottle it, you can’t touch it, you can’t explain it, and we all know it.  it’s not something we have, or most men have.  just you guys.  and thank god for it and for you’

It went on and on like that.  Its not going to win the pulitzer, i know, but the intention was that it would make them smile, feel good, feel proud and laugh.  that was my signature element, not the coffee table.

OH MY GOSH, i can’t believe i haven’t talked about the joy i felt about mixing the teams up, yet.  ‘joy’ doesn’t really describe it.  ‘ecstasy’ gets a bit closer.  with the loss of Dan, i was terrified of another week with one of my teammates.  (not terrified in a ‘scared’ way, but in a ‘i might just walk out of the competition and go back to my very pleasant life’ way).  So i am now happily still on the team with Casey, with the addition of Michael and Alex.  And it was very very very pleasant indeed.

We get into the firehouse and instantly ask all the requisite questions.  ‘how do you use the space?’ ‘what are your exact needs’ and color preferences, etc etc.  They already have a big hangout room with all their recliners and tv’s and stuff, this was more for drills and tests.  We knew we wanted to keep it simple and functional.  Nothing too decorative.  So we decided that anything decorative we decided to do would be in big graphic elements.  Alex wanted to paint skyline which i think was great.  remember people that there are no art options, so had he not done that it would have been a huge blank wall.  and I thought his mural was totally appropriate, graphic, made a huge statement yet simple.  kudos, Alex.

We first decide the wall color – which we knew needed to be masculine, but light because the space was so dead.  no natural light at all.  we didn’t want to go grey because it can be depressing if we couldn’t get any color any where else in the room, so we chose ‘feather grey’ (I think) and its a really grey light blue that we were super happy with.  Then we tackled the floor, which yes, was a nightmare. because we decided to polyuerethane it we weren’t able to use that space for hours and hours.  but i’m glad we did it, because there were no rug options or any other flooring solution.  We decided to patina it in a way that if it scuffs up, it hopefully will look interesting and old, not cheap and gross.  next time i’m in the city i’m going to stop by and check it out and say hi to the guys.  I’m curious if it held up.  oh and i want to see my firemen.

Alex helped a lot with the cutting of all the wood – he learned fast the first few challenges to be comfortable with the power tools, whereas I’m still slightly afraid of using table saws when i’m in a hurry.  as to not have any major accidents…..which leads me to Michael.  Michael took on this desk shelving system which looked like a good idea, but a lot of construction.  those nail guns are scary, and yes it went completely through his thumb.  he was a TOTAL  champ and as they were carting him away he was yelling out suggestions, which was effing hilarious.

Alex took over and saved the team.  He put together Michaels wall system sooooo fast, i helped as much as I could, but he should get all the credit.  he is such a good guy and works insanely hard.  as much as i adore my good good friend Casey, in a way i think that Alex could’ve won this challenge because the impact he had in the room was HUGE.  but again, the judges don’t see any of this, which is unfortunate.

Casey.  Dude.  that girl kept quiet about her art school years.  After building the canvas, which took a long time because it was so big, she whipped out the painting really fast and it turned out perfectly.  it was  a big graphic, yet personal element in the room and grounded that wall.

So did that room blow my socks off?  no, not really.  We didn’t  have the resources to.  But it was a big pleasant, functional, comfortable room for 6 dudes to watch TV and study for their tests. And while it wasn’t ‘decorated’ per say, it had a lot of artistic and personal elements in the room that will keep them interested and talking for years.

Nina was eliminated.   ‘Relieved’ is the word that i shall use.  ahem.  But really,  i don’t really have to say much.  it would be like me doing a post about how america has economic problems.  it’s like, yeah, no duh, everybody knows because anybody who watches the show sees for themselves what she’s like and how it all went down.  You don’t need little ole me to say it.  besides i’m just from Oregon.  and people from Oregon and Arkansas are different.

ah, self restraint. how i loathe you sometimes.  not nearly as much fun as what i’m really thinking.

read roomfu’s blog with her interview.
i’ll blog about the other team tomorrow.