I kinda want this living room.  I’m serious.  Its just so big and airy and open and now totally fun and happy.  It looks like them without looking like it was designed.  Let’s talk wallpaper.  When i first met with Joy i knew about her wallpaper and yes, loved the gold floral (i think they are succulents actually).  I knew they were open to wallpaper and it just made sense on many levels.  It would be like me having a fabric line and not having it anywhere in my home.  But when we shot the ‘wallpaper’ shopping segment we did it two ways because we didn’t know how it should eventually play out.  Of course i’m more inclined to say that Joy designed the wallpaper, but then it would look like that is why i chose it – and of course that is part of it, but it was also a design choice.  Because its metallic it actually plays more as a neutral than a bright color, and since the pattern was feminine enough, i knew the color had to be masculine or neutral. Anyway, hopefully all the people that watched and didn’t know it was Joy’s are now racing to my blog and hgtv’s shopping resources to buy that awesome pattern. 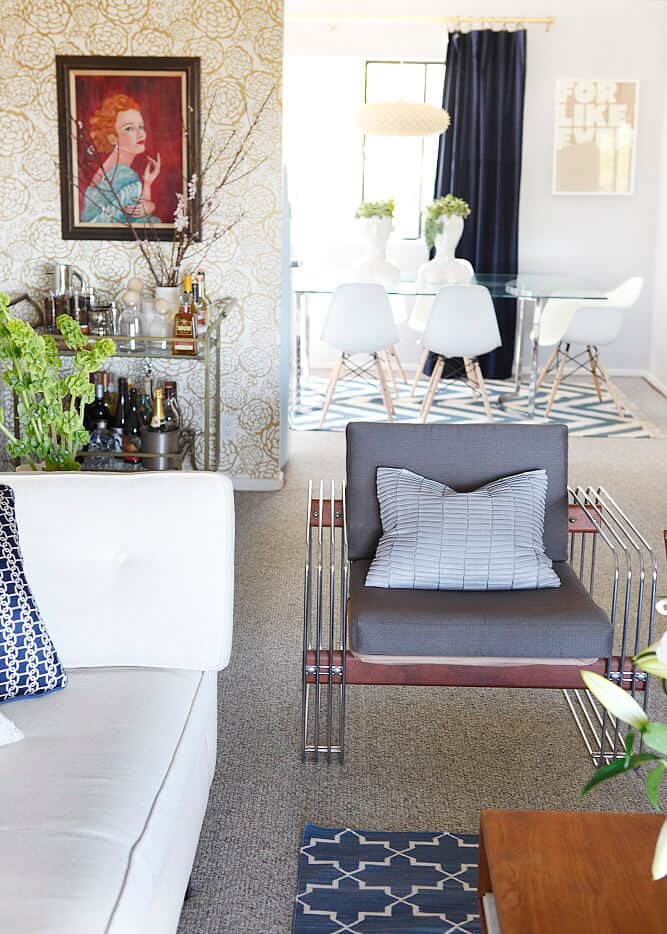 The sofa is Room and Board, Clarke.  The blue chain pillow is from Room Service, the Rug is Madeleine Weinrib, dining table base is vintage Mies Van der Rohe from design Modern ($300 for the base, then bought top from West Elm for $150 – they wanted to get rid of it, not sure if they usually sell the top).  The drapery rods are all Pottery aged brass (not normally in stores, but still my favorite rods/rings out there – so pretty and substantial and look high end, and well cost A LOT, actually ) 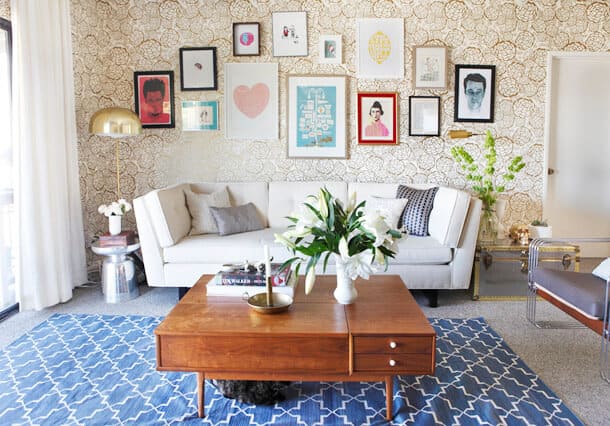 The vase on the table is vintage Rosenthal from the flea market, the trunk was $60 from the Long beach flea market, the silver martini table is west elm $120, and i’ll get to the artwork in a bit.  The drapery linen was $6  a yard from Grey Lines linen and then had sewn which frankly is beautiful in person, but you can’t tell here that they cost like $500.  That was the last time i splurged on simple white drapery – Ikea drapery looks basically the same on camera and is $60 per pair (although not lined and they needed light control in their living room).  Basically i’ve learned over the first season to splurge on things that make bigger statements and become talking points because on camera the viewers can’t tell that that vase has such pretty carved flowers all over it, and that it was like $80 and is beautiful.  It could just as well be from Michaels. 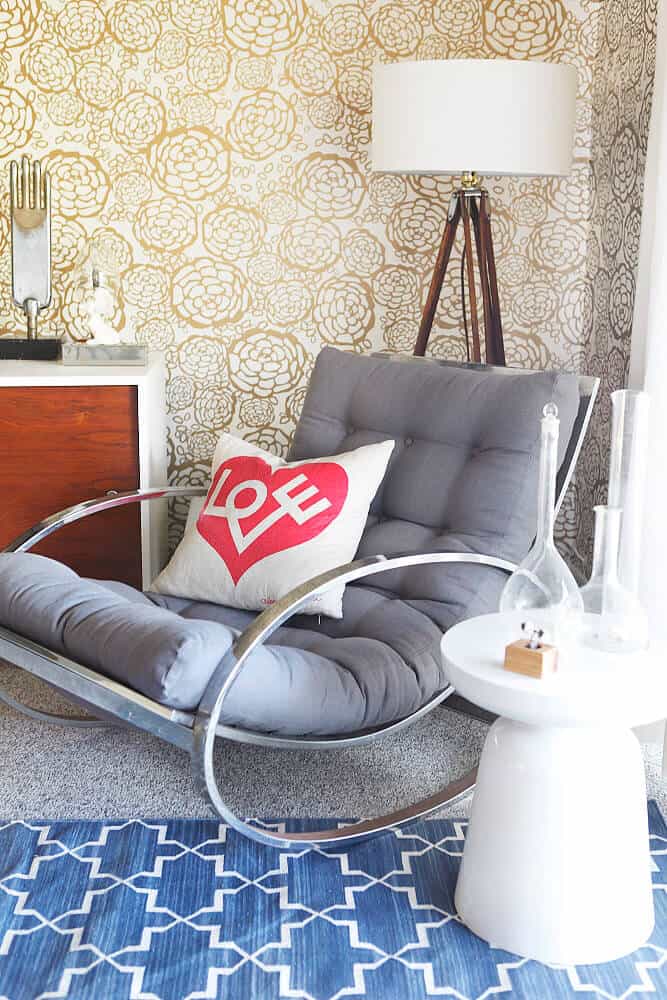 Talk about splurge.  I love this guy.  Milo Baughman from the Rose bowl.  It previously looked like this: 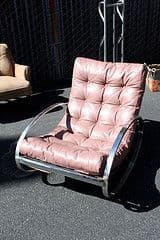 It doesn’t look that bad here, but it was ugly, worn and not in a good way. I had it reupholstered in grey linen (the linen was $6/yard from Grey lines in new york and reupholstering it was $250).  The chair itself was $500 so it ended up being a major piece.  But i love it.  the scale of it is awesome – its so huge and comfy and it begs to be sat in.  i picture Bob rocking his cats in this chair.  Reading them Dr. Seuss, yes, most likely ‘the cat in the hat’.  not being creepy at all.  This is where i sit when we watched the bachelor this season.  Still so sad that i have nothing to look forward to on monday nights any more.

The pillow is Joy’s Girard heart pillow, which i actually really want for myself due to how much i also love hearts.  the silver glove mold was from the Pasadena Antique Mall for $80.

And now, to the credenza.  Joy and Bob loved this one (like most of us) from BBDW: 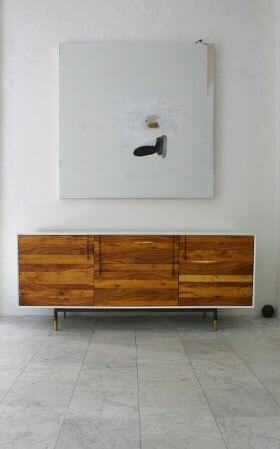 Its incredible. Everything they do is incredible. But it is a pretty penny.  the most beautiful penny ever, like $4000 or something like that.  Which if you have the money i think could be a great splurge.  Right now all i want in the world is to have their dining table, this one: 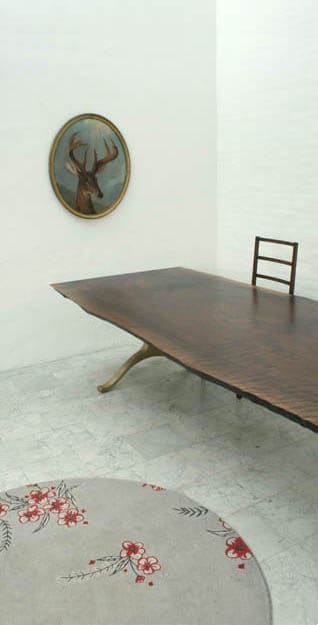 It’s stupidly awesome. It just screams ‘what, so i’m a big slab of pretty wood from Oregon, and yeah i got two aged brass or bronze trestle legs’.  and thats all i want my table to scream.  So simple and modern and sculptural at the same time.  arghhh.

Anyway, so i was on the hunt for something that i could turn into something similar to the BBDW credenza.  And i found this guy at Pepe’s on centinela:

It was $280 which still isn’t even very cheap, but those of you who shop for credenza’s know that they are a fortune.  And this one is MASSIVE which was necessary for their big wall and their huge tv.  This piece had two sides, this side that was glass and the other side that was sliding wood.  I didn’t paint it, Chris the contractor did but here’s what he did:

1. sanded it down to make sure there is a smooth surface.

3. spray semi-gloss white, two coats and let dry.  The key i think is to use a sprayer instead of brushing or rolling.  I think you can rent those things, but not totally sure.  Obviously he taped off the inside to make sure the inside stayed wood.  I love this piece. 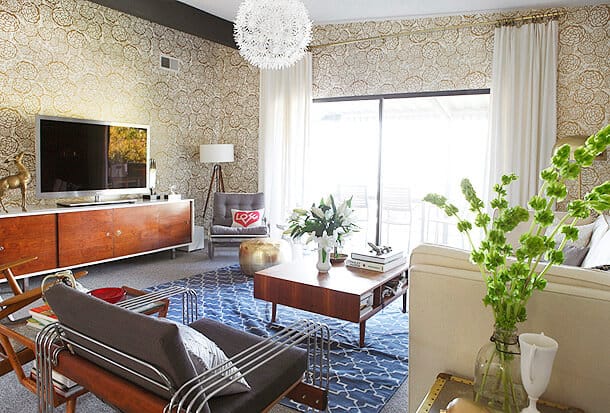 Oh! and the gold pouf and zig zag rug in the dining room were both from Nate Berkus’s line for HSN.  I think the rug was like $299 and the pouf was $99.  And don’t worry, you won’t see another pouf all season (quiet tear).  Yes, i’m addicted to poufs and i needed help.

Will explain artwork and more behind the scenes tomorrow.

All photos’ by Laure Joliet