Alright.  So this was the first time i saw the new format, and i liked it. We are working things out, trying new things and there are growing pains but i think its going to be a much better show.  Thanks so much for your comments, I really really appreciate them.  And you are heard. 🙂

Now to the good stuff:  I thought that it felt so much less rushed and i didn’t seem so tired and hurried (a combination that i didn’t realize i was until the format changed).  There were some editing bumps in the ‘furniture layer’, and we actually didn’t have the coffee table or the rugs yet (due to arrive the next day…what would normally be the ‘second look’) so we had to put some stand-ins in (that first layer ottoman was a last minute run to storage before the room service piece was ready).

But ultimately i’m psyched about this season.  I felt like there was more information and more of me and Orlando (who will start appearing even more, thank god because he is awesome).

I am still Krishann an Chris and their daughter are awesome. Totally sweet and lovely in every way and totally absolutely stuck stylistically.  He liked new, gadgety, streamlined and contemporary and she liked shabby chic, white-washed, crystal, victorian, uber feminine.  So when they shopped together they were gravitating towards intensely different things so they never agreed.  They bought the sectional recently and at first they bought it in white, but it i guess stained easily or something so they switched it out for black and while a lot of people would find a black leather sectional a deal-breaker, i found it a total challenge that sounded fun.  Its a good sectional, nice proportions and quality, so replacing it with something in our budget that was just as functional would be hard.

Sorry, no before pictures, they were on my old computer.  But here are the afters:

They are diagnosed as ‘Contemporary Romance’ which means furniture with clean lines, more masculine shapes and weight, then combined with more feminine accessories (mercury glass, crystals, porcelein), textiles (velvets, metallics), and finishes (mirrors, lots of silver and age). I kept them working together through the color palette and used the black of the tv and the sectional to my advantage.  The color palette was:  black, grey, white and lavender.  And it looks so pretty, if i do say so myself.  I went back a few weeks later to do a re-shoot and i was still so happy with it (not always the case). 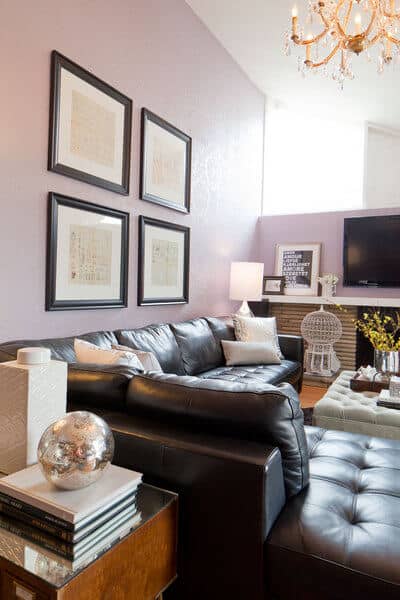 Sectional:  Owners, but i don’t know where they got it.  Barcelona chairs (not real ones, i’m sure), vintage from the flea market ($150 for both) then reupholstered in white Denim with dark grey piping and tufting).  I love these chairs. The original fabric was really bad brown vinyl, but now they are like Mr. tailored pants. 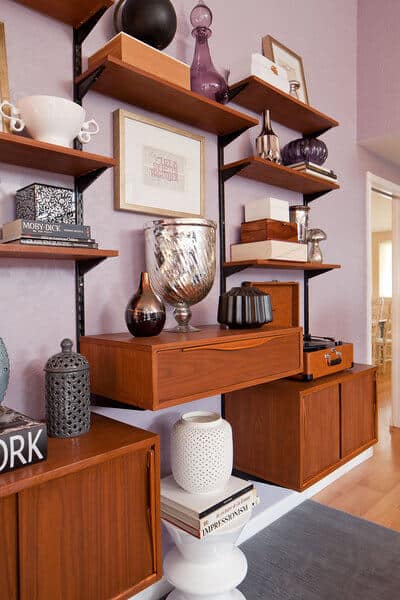 Shelving system:  I bought it from Pepe’s on Sunset (he makes them). But they are basically repro’s of mid-century modular systems that can be really expensive.  This system was $600.  I’m sure someone could make a badass version with ready-made cabinets.  The real-deals that are this big start at $1200 (and are usually like $1800 – $2400 with the cabinetry) so when i found these guys i jumped on it.

The cute white stool is from Chiasso, and its kinda the perfect little occasional table.  1/2 of the mercury glass was real, from antique malls, and 1/2 of it was from West Elm. You honestly can’t tell the difference.  I’m normally not pro buying things that are trying to look old, but a. they look the same, b. the old stuff is super expensive and very very breakable and, c. the new stuff can actually hold water without the painted inside flaking off. 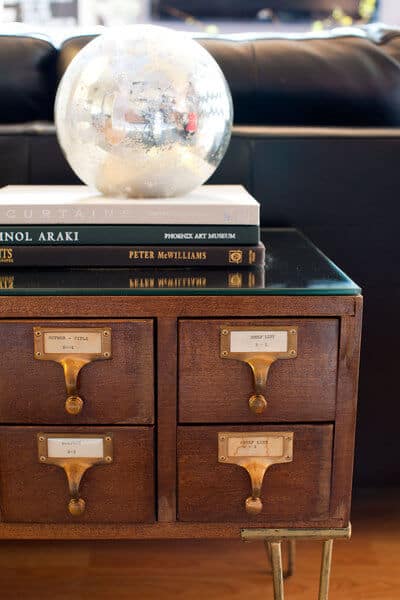 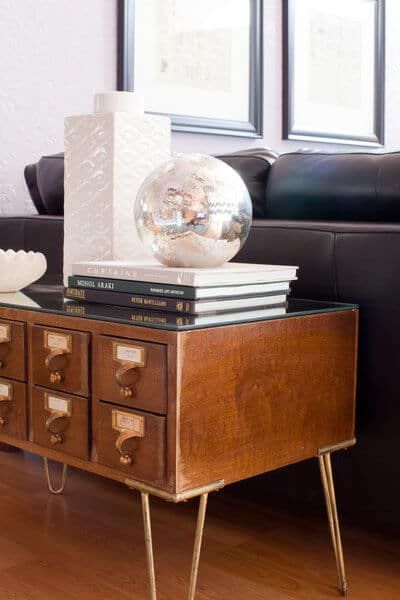 This little table was from the flea market, and I LOVE LOVE LOVE it.  It was $250 and worth every penny.  It’s an old card catalogue that was put on pin-legs and topped with a mirror.  And so can you. 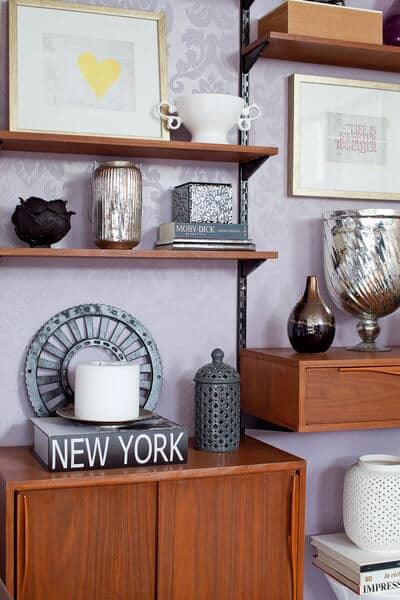 More mercury glass and white dotted pottery and white/wood stash box on top from West Elm.  You know i love vintage accessories, but the good thing about West Elms is that they change seasonally before you get actually sick of seeing them.

The ‘Life is Sweeter Together’ was one that Krishann hinted at that she liked, its totally adorable.  It’s from Etsy, from FauxKiss, click here.

The New York box is from Z Gallerie.  The white footed bowl and the grey cutout vessel is from Room Service. (both cheap, i forget, but betwen $10-$20). 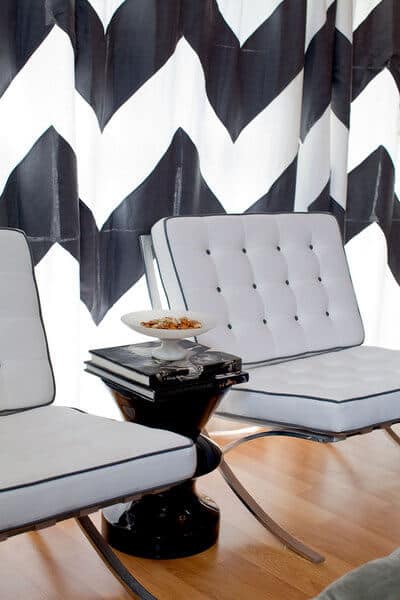 Black stool from Chiasso,  too. Sorry i did two of the same in one episode, but they seemed perfect for them (remember the black wine glass that he chose?)  Masculine and feminine…and these suckers are like $158, not bad, not bad.

And the chevron drapery….long story.  So here’s what we did:  we bought big box thick drapery then cut this grey linen in a big thick stripe, cut, folded it, …..the reason i’m not going into detail is because i wouldn’t recommend it.  We then used serious doubleface siding to iron it on, after we hemmed the sides.  Don’t do this.  It was super hard to manage because they were SUCH huge drapes.  If you want a pattern, then yes, go through this effort, but there is a lot of troubleshooting that we didn’t know about and frankly didnt’ have time to fix.  SO, next time i would either a. design it on Spoonflower (I didn’t know about that at the time). b. order a chevron fabric that someone has already designed on Spoonflower (Oh Joy’s is awesome), or C. paint with fabric paint and 3M Blue tape.  I hate pointing out my flaws (totally not true) but in this case they were dramatic and totally worked on camera, but when you looked closely, they had a lot of ‘character’.  Luckily Krishann is like the sweetest person ever and was just psyched that they were something that was so handmade and just for her.  Which they were. 🙂 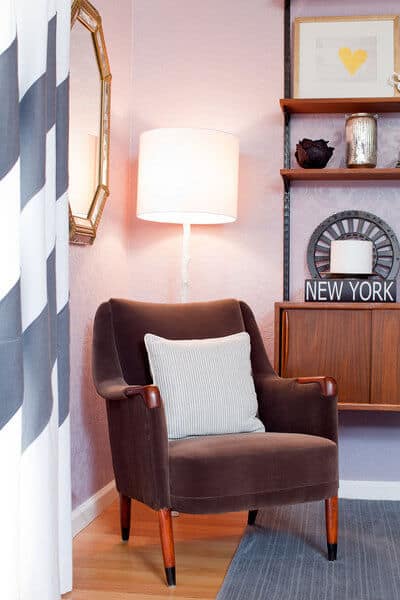 That chair was vintage, from the flea market i think. $250. The rug is a standard Ikea Grey rug.

The ottoman is from Room Service.  I customized it (which you can easily do there, but i’m sure they still have my particular order if you want that one exactly just tell them you saw it on the show).  Its around $700, i think.

The metallic pillows are from Chiasso, and the little 12×16 is from West Elm. 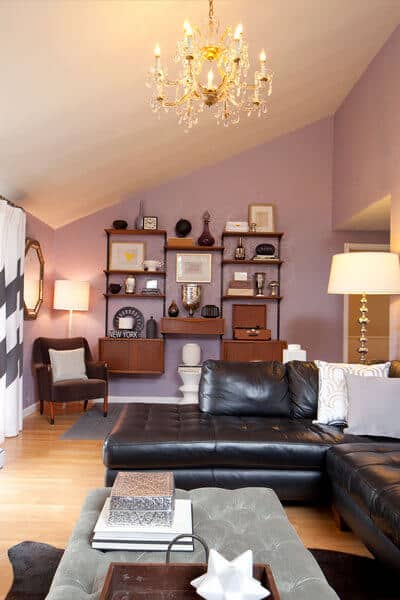 The wood tray is from Pottery Barn.  The Cowhide is from Ikea.  The mercury glass standing lamp was the homeowners.  The standing lamp in the corner is from ZGallerie (its the white faux bois one).

The chandy was vintage, from Casa Victoria, on Sunset in LA.  $350. 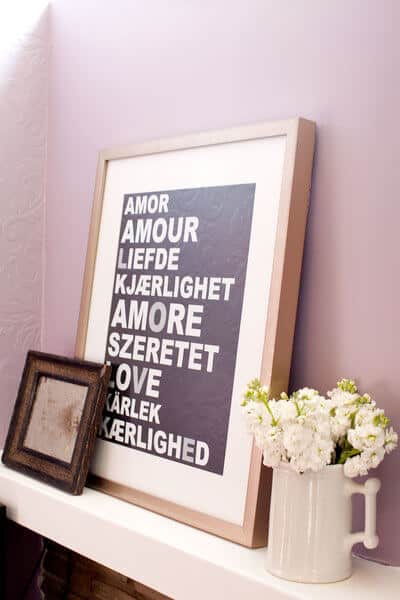 This poster of LOVE in all the different languages is an etsy find, too. From Jennifer Ramos, (MadeByGirl), and you can buy it here for $25.  Perfect for ‘romance’.

WAIT!!! The wallpaper is from Graham and Brown and its only $30 a roll (super cheap).  You really can repaint it different colors whenever you want.  It didn’t read that well on camera, but in person its awesome.  The wall color is Violet Rain by Benjamin Moore, 1451.

And that, my friends is the beginning of season 2.  Thanks so much for your support.  i loves you a lot.

All photos styled and taken by the awesome Teri Lyn Fisher

461 Comments
Oldest
Newest Most Voted
Inline Feedbacks
View all comments
Our sites use cookies to improve your experience. Learn more