I was nervous about the second look because he really really liked the first look, and she liked it enough, so why would i change anything? Yes, it was really ‘boy’ but he’s a bachelor living by himself so it was super appropriate.  But I did.  I switched out the sofa with a sectional from BluePrint. (i think it was around $1500)  – which is not bad for a sectional, btdubs, and what’s great about Blueprint is that you often can get your sofa within a week (not always).  The room needed to be lightened up and instantly it looked a lot lighter with that sectional…they even thought i had repainted.

I repainted the fireplace wall, because those stripes annoyed me.  Then I painted out that niche bright white and added the Ferm Living Decal  which is kinda awesome.  I know that there are mix feelings on decals, and yes, there are a ton of stupid ones out there.  But first of all Ferm’s are pretty playful and fun, and second of all for a niche like this its perfect.  Originally i did want to wallpaper there, but since i have learned that wallpaper can not be diy’ed, it seemed wasteful for me to hire a wallpaperer for one niche, plus waste so much of the roll. So it was the most economical and frankly kinda more fun then wallpaper. 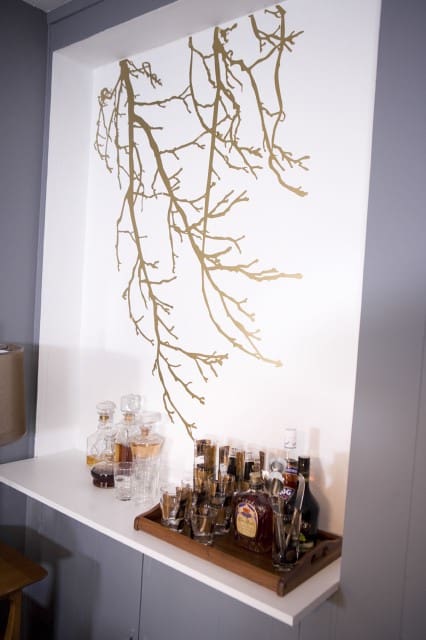 I built out the shelf so now it houses the bar.  Oh and when Orlando said ‘That was so easy’ he was being sarcastic because we needed to start to put up the decal before the paint had totally set.  We waited as long as we could and my contractor said it would be fine.  I knew it wouldn’t be but we tried it anyway.  So the branches didn’t want to stick on the wall (because it still had moisture, even though it felt dry).  Most people obviously wouldn’t have this problem, but if you do by chance paint, wait a day to dry – we waited like 3 hours. 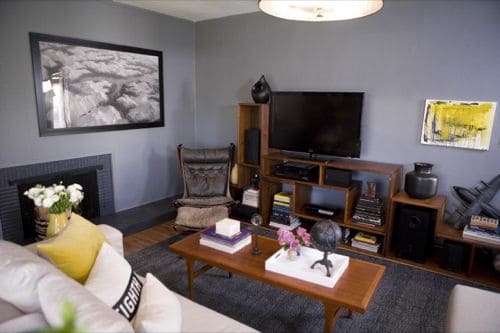 And that crazy modular goodness.  This is how i originally found it: 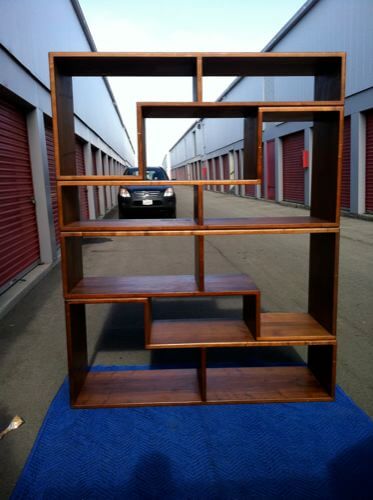 You all know how expensive shelving units can be.  So this one being around $400 (sorry, i forget) was pretty great because it would ground that whole wall, allow for storage, and is just extremely ‘guy’ because its so simple. 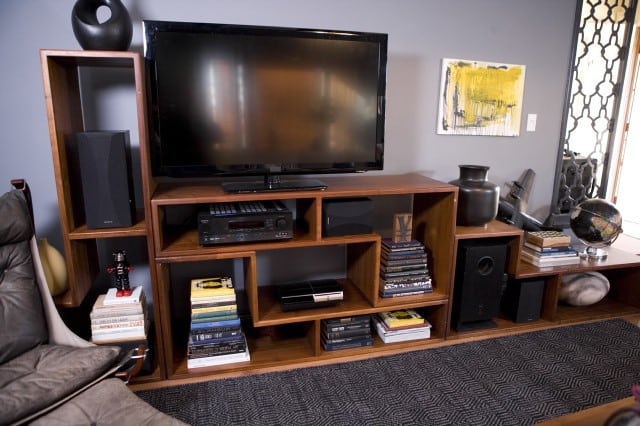 God, i’m so sorry about the bad pic.  ANd i wish that tv was over like 6 inches.  It pains me to post these pictures, by the way, because i’m not there when they are done.  I mean that chair looks jammed agains the shelving unit.  (just to be clear Laure didn’t take these).   AHHHHH but what do you all see in the upper right corner? A Nicole Cohen original painting.  S’right.  I saw it when i was doing the moodboard through her blog, Sketch 42.  Nicole is an artist, whose NYC apartment effing rocks (and she designed it herself).  I met her at the HGTV lunch a while ago (where i will always regret saying like 3 stupid things by the way), and we got each other instantly.  She should have her own show, by the way.  AND her husband owns M and J Trimmings which is by far the best trimmings store in the world.  I curse that it isn’t in LA, at least once a week.   When i was a stylist i would spend hours and hundreds of dollars of there a month.  (ribbons/trimmings are like fabric and flowers to me, every one is so different and inexpensive so its such a fun/easy way to spruce up anything and shopping for it never gets old….its not like shopping for sofas where you are like, god, i can’t wait to get this huge purchase that i’m dreading over with…its just ball fringe, and gurl i LOVE me some ball fringe).

I digress.  Anyway, you can buy Nicole’s other beautiful pieces (originals and prints) here.    And check out her house featured in Rue, too. Your mouth will drop.  And Nicole, don’t take this the wrong way, but sometimes and only sometimes i think you should be next years addition to RHONY.  I know you have kids and probably don’t want to expose yourself to the world in such a way, etc, but the idea of you and kelly having even one conversation sounds like some good entertaining TV. 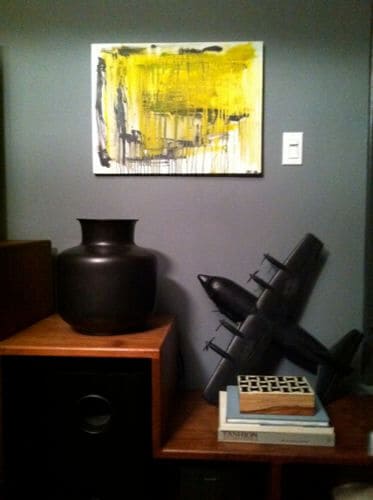 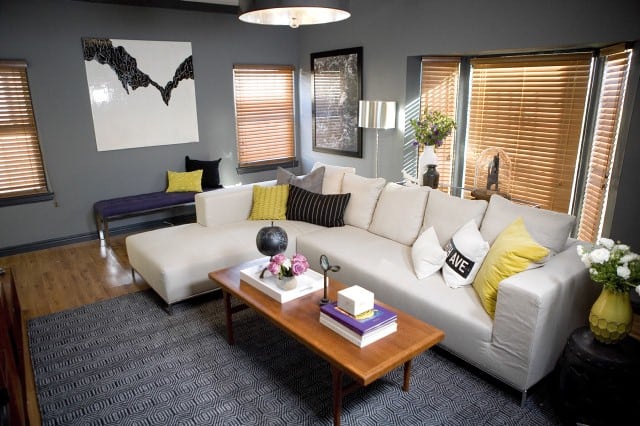 Oh and this was the first time i had blinds done.  He made it clear he didn’t want drapery and it would feminize the room too much.  So i had these bad boys done at the last minute at Home Depot and i actually really liked how they look in this room. Blinds get a bad wrap, but they make sense and in here they brought in a cozy den quality.  Check out the first post for the artwork links.

The bench was reupholstered from this:

And the reason there isn’t more purple/aubergine in the room is that he told me at the beginning of the week that he hates purple, and i was like ‘yeah, of course’…..whilst texting frantically to cancel all purple in the room. but the bench was already done.  And he wasn’t a huge fan of it, but it looked good in the room. 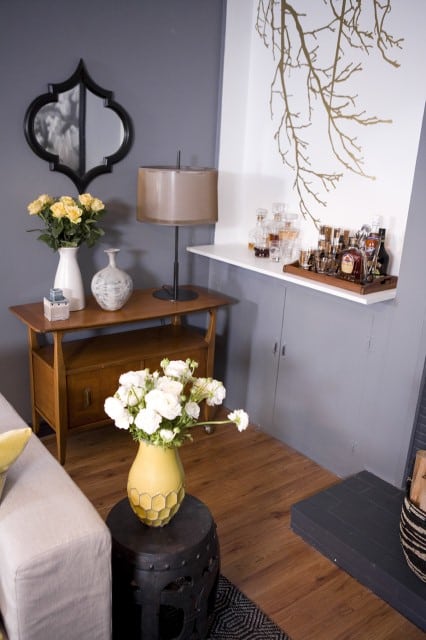 This week i shopped at Room and Board and Plantation, by the way.  i keep forgetting to remind you.  And last week i shopped at Maison Midi and Plush Pod.  I can’t tell you how hard it is to come up with 52 stores for the two seasons and not repeat – and have them each be different visually AND have the pertinent to the episode.  I rack my brain everyday.

So that’s it.  Stay tuned for episode 11, oddly another bachelor, but this time a single dad.  So cute.