Oh Allen Stone – the most soulful hippie/hipster from Washington State that I know. I know exactly 1, but I like this dude – probably because we both have long, wavy, blonde hair. In case you don’t know who is he, he’s this dude:

Once I saw that picture I knew that I’d probably like him although looks can be very deceiving and he could have been a huge try-hard poser. So once I met him I definitely LIKED him. Throughout the entire process he was so lovely, generous, thankful, gracious and considerate of our time and effort. How very refreshing, indeed. It’s because he’s from the PNW (Pacific NorthWest) and we PNW-ers are generally really nice.

In case you are just stopping by here’s a bit of background on the project: Airbnb wanted do an experiential marketing campaign where we designed these three Kithaus‘ with three musicians at SXSW. These musicians filled out a questionnaire that helped Ginny and I come up with an initial design plan. We presented it, they approved it and then we installed it where it remained live for 5 days in Austin last week during SXSW.  And the whole event turned out pretty awesome. (Check out the first one we did HERE and look at Moby’s,  Lake Bell’s,  Molly Sims‘,  Anjelica Huston’s and James Franco’s, as well as Snoop Dogg’s and Capital Cities).

So we read his questionnaire where it became clear that loves rustic, 70’s, hippie and weird. So here’s what we came up with: 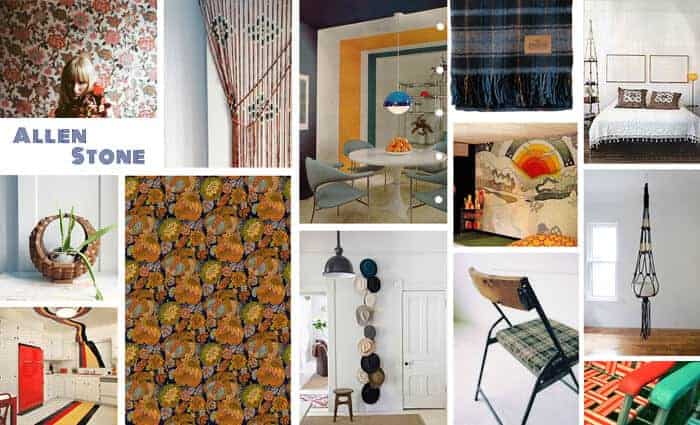 And here’s what we pitched to him: “He’s a hippie with soul, and an R and B singer from the PNW. His room will feel a little bit retro 70’s, a little bit rustic hippie and a lot of ‘weird’. We took our main inspiration from his cover photo set in front of this ‘ugly in a good way’ floral wallpaper, with his glasses and hat that show his unpredictable style. It’s masculine and casual, pulled together and beautiful, and yet totally weird. It will be a dudes den that a chick would love, too.” 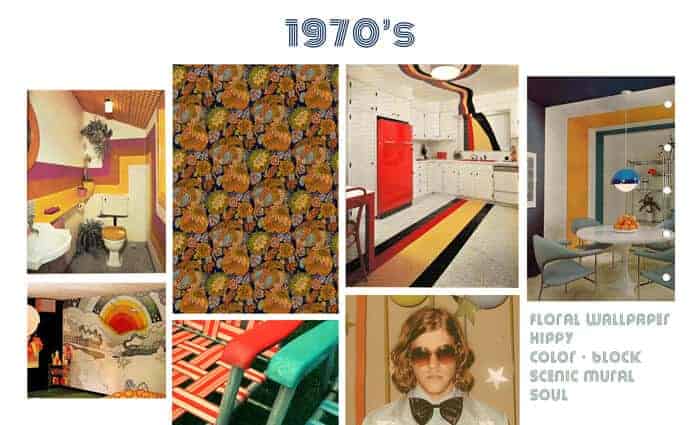 We wanted it to feel a little over the top in the 70’s and ‘weird’ styles, but with enough warmth in woods and casual finishes to make it feel grounded. 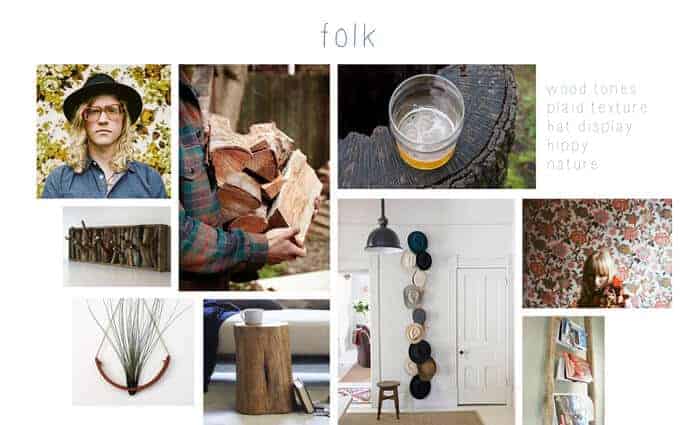 So we presented him with said plan at The Echo before he had a show: 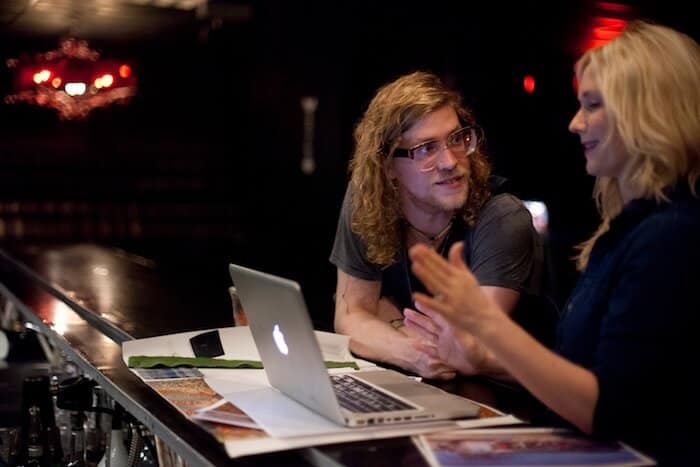 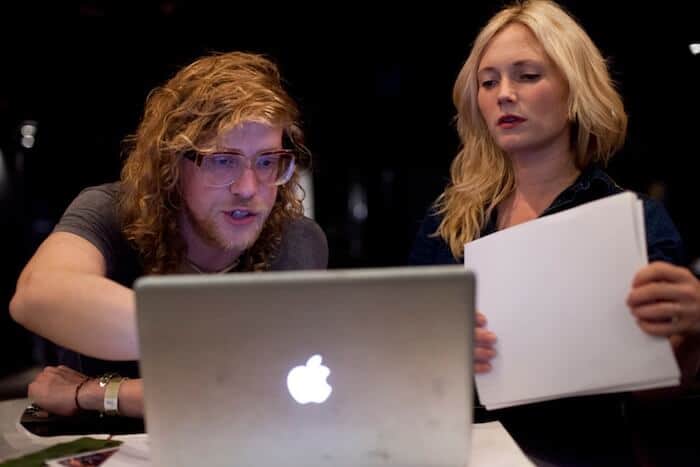 He was into it completely so we got the green light to proceed. He was also absolutely fun, normal, down to earth and totally unaffected. I’ve worked with a lot of celebrities and I promise you that they are normal affected. And there are many times where I know that even I have become affected and have to monitor myself. Fame (and Hollywood) does something to most people and maybe its just a matter of time, but as of now I can tell you that Allen Stone is just such a lovely, down to earth person. 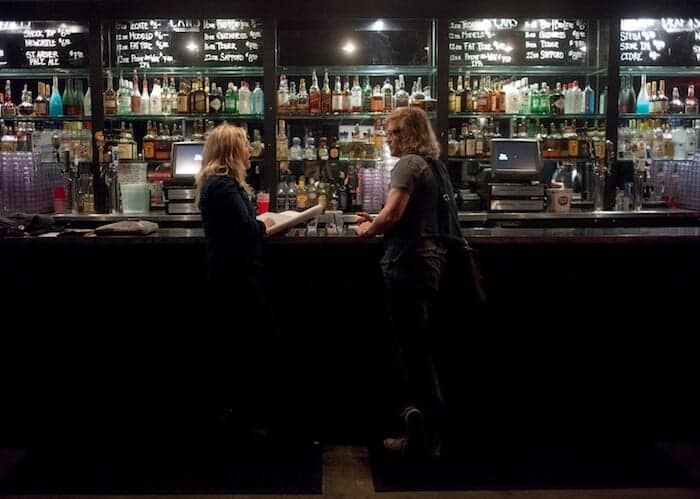 After the meeting we shook on it – and by ‘shook’ on it I mean we took a shot of tequila because that’s his drink and I don’t say no to my clients with reasonable requests for celebrating. 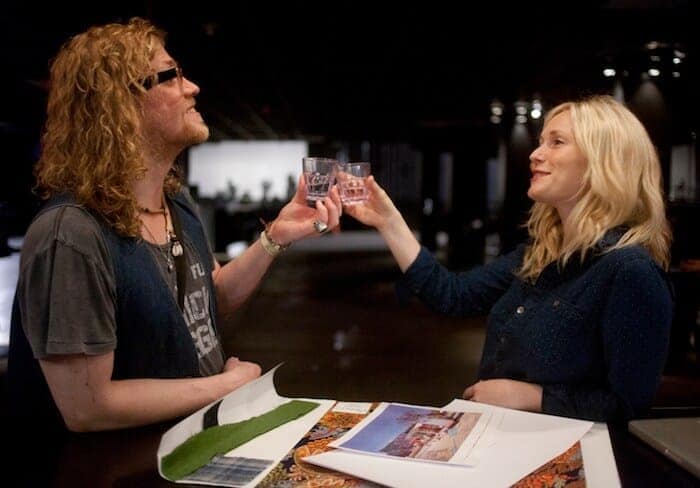 Then we started shopping. The above mood boards are mainly done on a computer, so once we got approval we hit the streets and sourced all the items below. 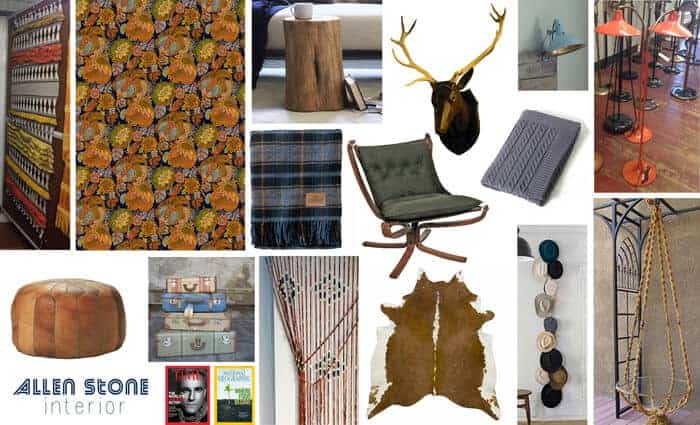 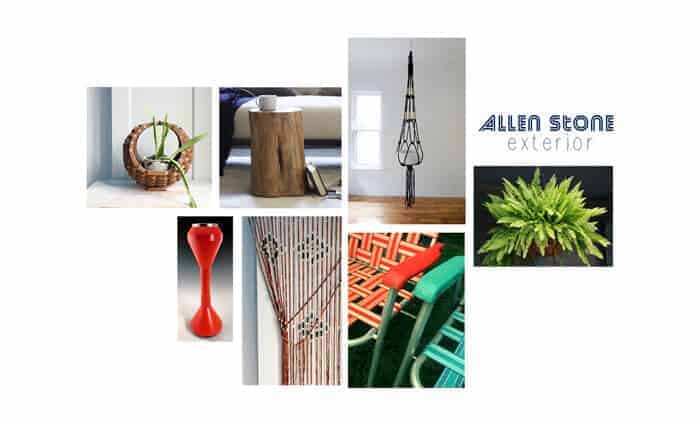 Meawhile we had our friends at Tajima Creatives do these renderings so our clients could sign off on approval. For the exterior we chose these Pacific NorthWest inspired ferns and hippie plants.

Then inside we had this plan – Awesome floral wallpaper on the walls, a custom plaid headboard, macrame everywhere, collection of vintage hats, a wooden stag head, and lots of vintage accessories. 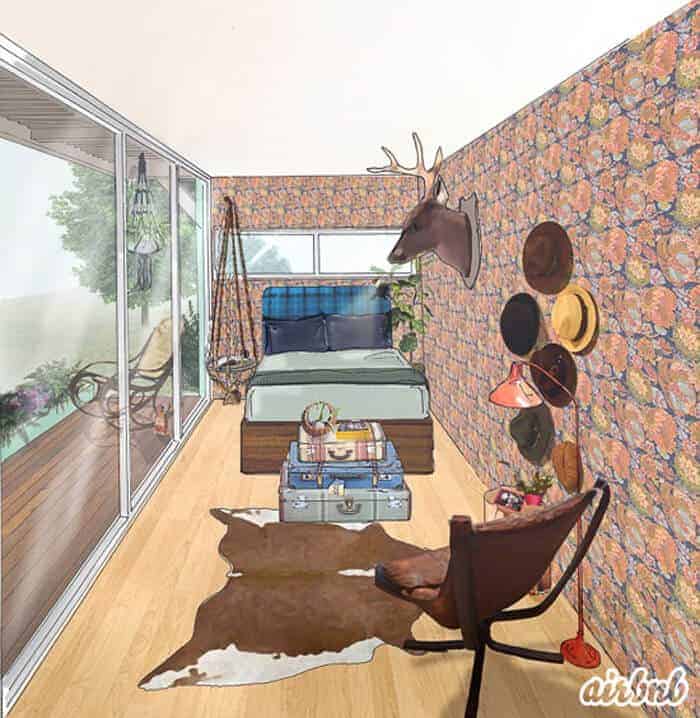 After a five-day install (of the entire space) Mr. Stone’s space looked like this: 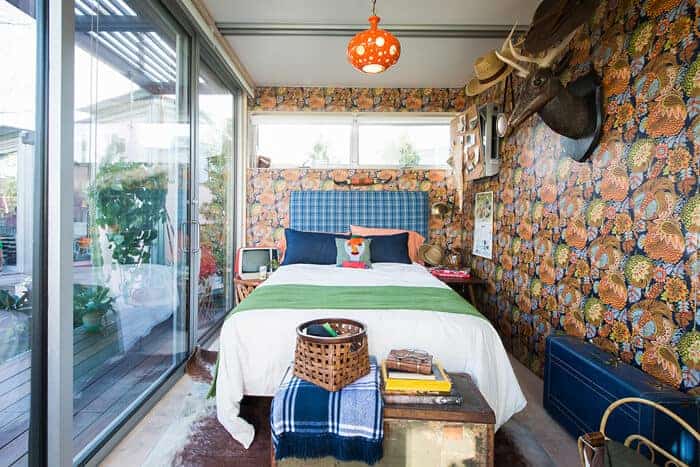 And I pretty much wanted to move in.  It’s totally cuckoo, but I also want every single thing in here. (and yes, some of these photos are styled by me and some aren’t – you’ll be able to tell the difference, I’m sure). That basket on there is for the winners of the campaign with a bunch of goodies from Allen. 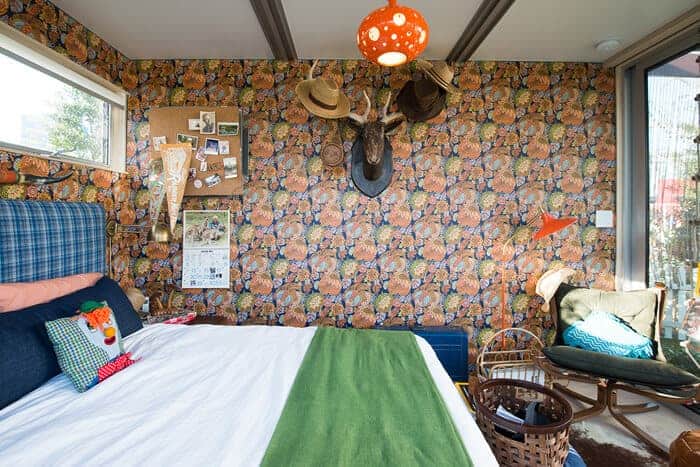 Everything in here is either vintage or rented except for the headboard, denim pillow and green wool blanket which we had custom-made. (I believe it was $450 for all of them). 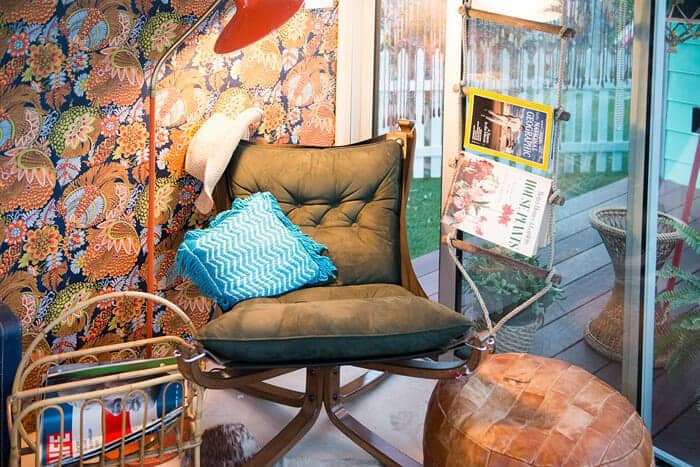 Oh and that pouf is mine (I bought it from Shopclass, which does have a few more, by the way).  And yes that is a vintage 70’s Jack Hanna calendar hanging under the air conditioner (which we disguised with a cork board and random ephemera).

That elf’s head planter (which may have been the base of a cookie jar that we repurposed) had a big old fern in it which looked weird and awesome, but somehow it went missing so that looks a bit unfinished in that pic. This planter, like many things that i pick up, was considered creepy by most – but not by me. I like me a head, elf or human.

Whats up with the clown pillow you are wondering? Well, its weird, vintage and random and somehow just seemed appropriate. Behind him was a big custom denim pillow we had made because Mr. Stone loves denim so we wanted to bring that in somewhere (it was from a fashion fabric store for $7 a yard).

It rained a bit there – how very appropriate to the PNW vibe, even though my vintage rug was not psyched. The rocker was from Craigslist and Allen actually loved it so much that we shipped it to him afterwards. The hanging macrame table back there has been mine for a couple of years and finally had its moment. The folding leather bench is from ShopClass.

Big Red Sun landscaping in Austin took care of the exterior plants and did such a great job. It felt lush and PNW but with a weird 70’s bent. And then I added a vintage foosball table, pendant light, and of course a whole row of beaded curtains across the back of the pop-up.

Then we added more hanging plants, because I’m addicted.

So, sadly I couldn’t be there when Allen saw the space (schedules got all messed up so we missed each other – physically and emotionally). 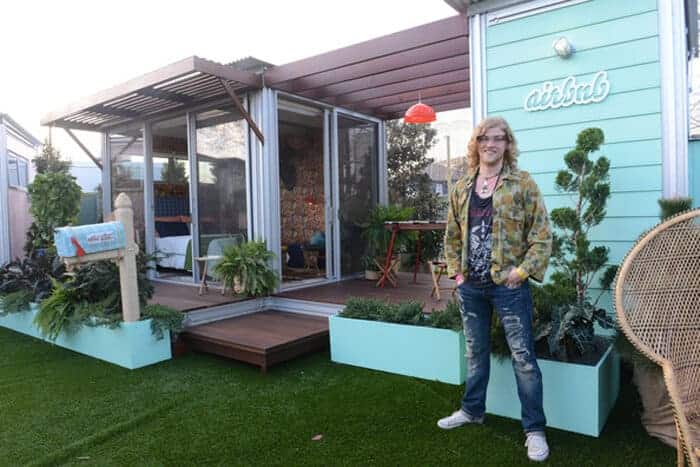 But he took this pic and texted it to me with the lots of words of gratefulness and satisfaction. 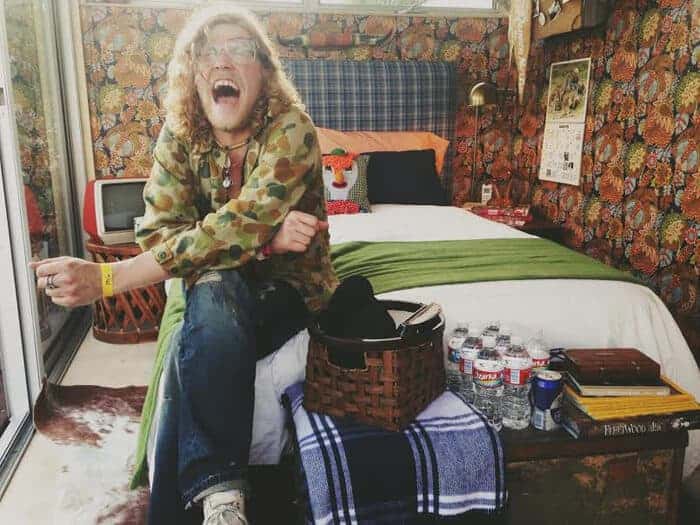 Here he is looking pensive, thinking about why he has to travel around and sing to sold out crowds and not sleep in this weird pop-up that some random chick designed for him. 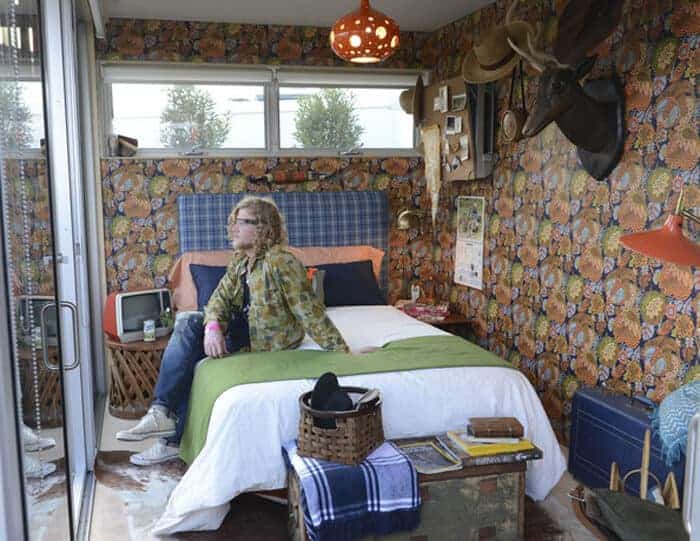 And then this dude came – he’s the guy that won the week in the pop-up. (they didn’t stay there but they got to use it as their home base throughout SXSW which is actually awesome because it’s a madhouse down there so to have a space all to your own that you can lock the door to is pretty amazing). 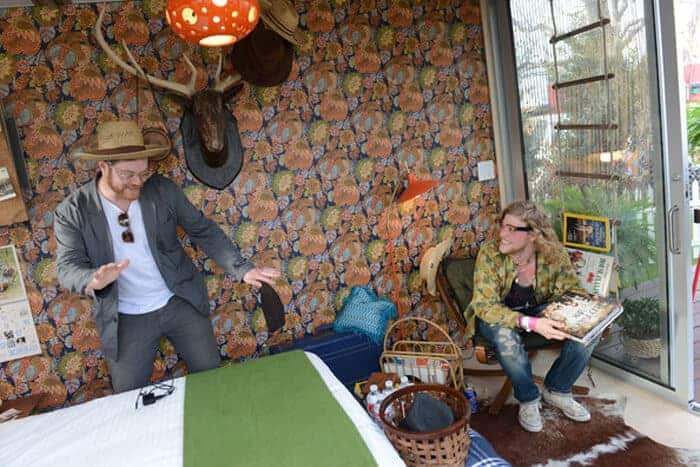 So that’s Allen Stone’s pop-up house. It was groovy, happy and totally weird  – like my alter ego. 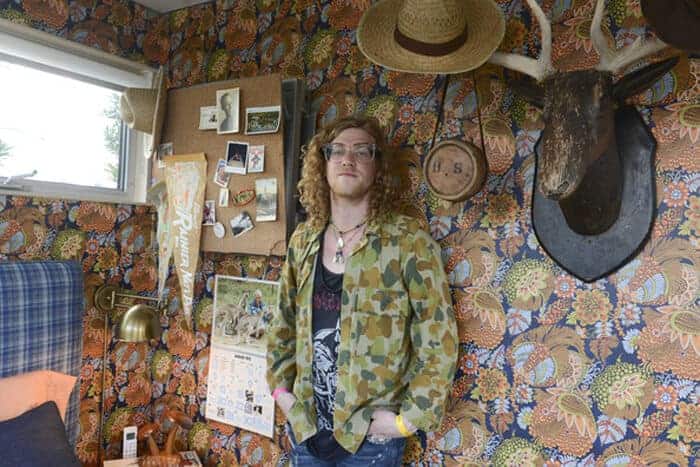 I loved Snoop’s, I did. But Allen’s was way more my style in a lot of ways. It was sooo much easier to design, full of so much personality and sourced almost exclusively from vintage stores or prop houses – which is why I didn’t really link anything.

Check out a quick little interview I did on GQ.com about how to get the look.

So my question to you is: Which pop-up house is your favorite? Snoop Dogg? Capital Cities or Allen Stone?

(Meanwhile check out all the past Airbnb pop-up houses,  HERE and look at Moby’s,  Lake Bell’s,  Molly Sims‘,  Anjelica Huston’s and James Franco’s)