This episode wasn’t boring (i loved the camera challenge), the designers weren’t boring,  but the unfinished spaces were, and therefore this post is probably going to be a snoozer.  This is not what i wanted to see from these four designers whom i like a lot.    I didn’t even really want to do a review this week because i don’t like being negative, but if i’m going to do one, i’ve gotta be honest.

The challenge was to design a model condo with a particular color infused into the space.  Here’s the thing with staging and with model homes, you really can’t do anything too crazy because its supposed to have wide appeal. So i’m assuming that that is why all the spaces turned out so incredibly ‘meh’ especially for a color challenge.  Well, that and their lack of resources and time.  None of the spaces are finished and its hard to look at.

These designers are more talented than what you are about to see.  I swear.

Danielle got ‘blue’ and how very lucky indeed.

Yes, she painted the walls practically the same color, which is her mistake.  But clearly she didn’t finish, she talked a lot about how she didn’t finish, and i’m sure she’s as unhappy with this space as i am having to post it on my blog.

There are no red flags, everything is fine, but the lack of personality is palpable.  I’m not blaming her, i’m blaming the lack of resources and time.   i’ve been there, so give her a break.

Her tip was to paint the mats of generic frames all the same color to add visual interest on a budget. Decent tip, but super small frames on a large wall and lame photos of plants inside them.  But she knows this and obviously didn’t have access to beautiful photographs or huge frames.

The pictures speak for themselves.  But on her camera challenge, which was  a live tip on ‘The Talk’ she did a good job. She was relaxed and informative. She is still a bit cagey with her personality – or at least she’s edited to be so, but i really like her.  And despite this weeks unfinished room i think she has good taste and would have a good show.

Hilary is up next:

For the amount of personality this chick has i wanted to see more in the space.  Again with the beige walls, i don’t understand.  It’s like painting an orange orange. Or bleaching Mark Consuelo’s teeth white: 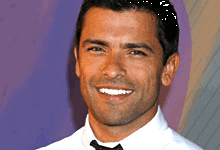 It’s just not wasteful of time and perfectly good paint or bleach.

Her use of red was good, as red can be tricky.

Sorry, Hil. I love you, but i can’t wait til next week.

This is the least generic thing that happened this week – a framed tapestry.  Good idea, executed well, i’m all for this and have done this many, many times.  Thank you, Hil.

And Hil, you know i love your outfit below.  There is such a disconnect – no one that wears those pants designs boring spaces so i’m still holding out faith for her that she’ll show us a fun, inspired space that matches her personality.  I loved her on camera – she was relaxed and funny and totally herself.

Britany is up next:

She got ‘yellow’ and this is her space:

Thank god for color on the walls and not a beige sectional.

The archtectural detail she added broke up the space nicely.

Send them back to the prop houses, for props sake.  This is painful to post. SO completely unfinished.

Favorite accessory of the week is that lamp.  I’ve seen it a ton, but at least it is good.

Her spaces always look like her which i appreciate. But she is still not being enough herself on camera – or else she is being herself on camera – not sure which is worse. There is a lack of energy that makes me want to shake her and say ‘HAVE FUN’.  But it could also be the editing.  I came off boring on camera and i ain’t, i promise.

Ah Mikel. My adorable ex-intern.  I’m kinda stretching that whole story, by the way, i think he interned for the show for just a few days before he got a job, but i liked him.  But even if i didn’t know him i would still be rooting for him because he has such an adorable personality and great style.  I think he doesn’t have the design experience that the others do but the judges have been holding on to him because of his personality.

He chose ‘green’ which is great.

But then he chose this green, which is not:

It’s truly a raunchy color, 90’s suburban and makes all those pretty mid-century inspired pieces look really orange and dated.  It’s a mistake that is going to be very hard to recover from.

But strangely his room i think has the best layout and utlilizes the space the best.  He got Yipped apart by Vern  about putting two sofas facing each other but by doing so he took the bowling alley effect out of this space and ‘implied two rooms, instead of one massive narrow room.

Good furniture, just bad wall color.  I don’t mind the architectural detail he designed and if it were in a mid-century house i would like it as a room divider.

The other designers rooms had sectionals that yes, faced the tv and fireplace. But if the main function of your space is hanging out and entertaining then this is a WAY better layout.  People can actually face eachother and speak whereas with the sectional they are all lined up on the wall facing a strange fireplace and a REALLY high TV.   Plus you can lie on the sofa and face the TV. It’s not that difficult.

I would however sacrifice my little pinky toe for even 5 books on that shelf.  There is no way that he thought that looked good, so its almost a moot point. I’ll take my pinky toe back, actually. Thank you.

On camera he is adorable and so likeable.  Distressing the table is not my thing at all, but it seems to be a crowd pleaser and is an easy tip to demonstrate.

I’m not sure who the winner was this week, i don’t remember. But Mikel was sadly sent home. He will be missed.  His obvious happy personaity and great style were fun to watch and i’m sure he has a great career ahead of him.  Probably not as my intern, sadly.  But maybe we an be friends, eh?

The good news is that i like the final three a lot.  While i was not prediciting a girl (i assumed that because Meg and I won, that they would be looking for a man and because i know they are trying to draw in more male viewers that tend to watch the male shows…), i’m happy that its these three girls. They all have a sense of style and a point of view that feels different from each other.

I think its going to come down to personality.

I’ve got my prediction, but who are you guys predicting?