So what did you guys think? I’m totally loving Design Star this year so far.

The bold, the bald and the bearded.

i’m definetly invested in who wins.  I’ll probably hang out with this person, do shoots (and shots) with this person, and exchange presents with this person,  so i’m kind of totally riveted and looking for any and all signs of who could end up being the big winner.  A winner who is cool and hopefully not a d-bag.

So far, the show looks great.  And the designers look accomplished (I checked out their portfolios on the hgtv.com website)

Lets talk positives:  David Bromstad is back, plus we have a new host, Tanika Ray.   The designers seem seasoned, the judges seem nicer and the challenge didn’t involve souvineer bags.  So far so good.  Let’s break them down:

Meg and Tyler.  Totally fine.  No red flags.  Nothing awesome happening here, but nothing bad happening here either.  Sure, those shelves are empty but i’m pretty sure they knew that as well. The bedding was cute, the color palette fine.  I couldn’t find a picture of the headboard but maybe thats because it should never be seen again.  I really didn’t care for it.  But I like Meg and Tyler so far.  Meg is solving design crimes which i can’t tell if that is cheesy or great.  I mean, there are a lot of them out there, so if someone is fighting them and reducing the amount of them, then great. They both seem nice and friendly and are working great together, but certainly not blowing any of us away with this room – which i’m sure they would agree, as well. 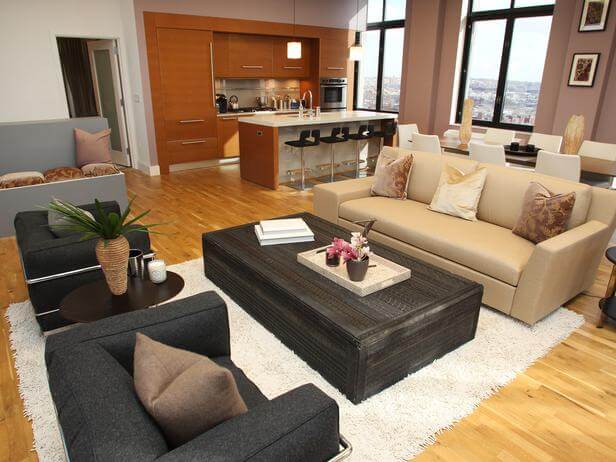 Leslie and Kathy.  Fine.  Whatever.  I think i’m biased because they both seem like they are taking themselves seriously.  The room looks safe and like a business corporate suite and doesn’t make me want to watch their show…yet.  Kathy is giving red flags already.  She said something about how she draws a lot of inspiration from traveling and i’m all, yeah, no shit, we all do.  But the way she said it sounded like she was the only person who has ever been out of the country.  Being the Emmy winner that she is, she could either be great or over-hosty.  And i’m not a big ‘hosty-host’ kind-of viewer so i’m already a little turned off. BUT, i’d be happy if she changed my mind.  Leslie did push-ups.  I’m not sure what to think about this:  she either needs a lot of attention or she is just super quirky.  Hopefully the latter.  I was too terrified the first day to do anything except awkwardly clap so i’m certainly not one to talk.  At least she was comfortable in front of the camera.  I felt so bad for the movers that went up THIRTEEN flights of stairs before they had to carry that massive ‘italian rosewood’ table back down.  I though Kathy handled that rather bossily, but Leslie handled it much better.  Still this duo gives me the most…..pause.  I can’t wait to be proven wrong. 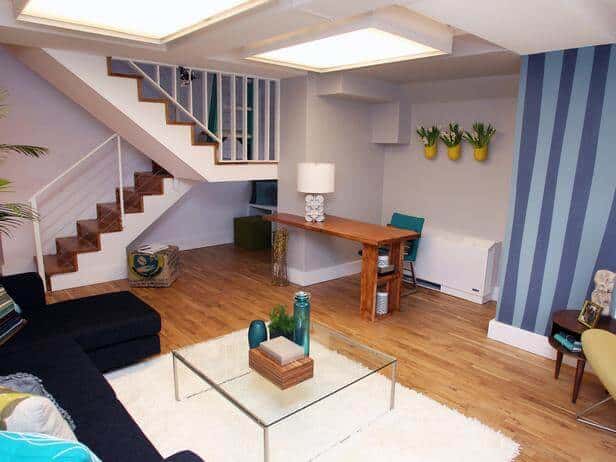 Probably the best room. Not saying a ton, because none were totally impressive. But the table that Karl Built and the mural were both interesting and tasteful (and you know how i feel about nurals, i mean murals). 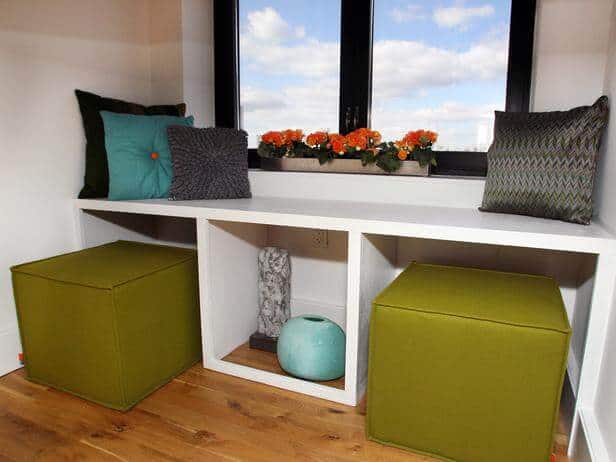 At least they used color, i guess. I like both of their personalities. She seems bubbly and fun and he seems super sweet so far.  I’ve poured over their portfolios and both of them aren’t giving me any reason to not want to watch their future shows.  Karl and Kelly and cute and seem to have managed the first challenge well. 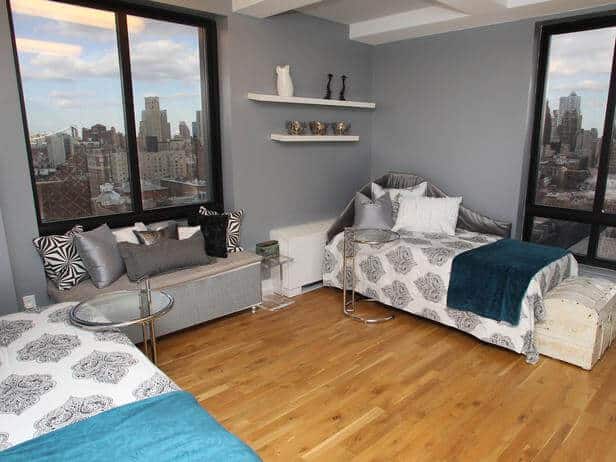 I barely remember who did this.  Doug and J i think.  Thank god for that white trunk and the pretty bedding.  It’s soooo underwhelming, but i’m sure they knew that too.  The color palette is fine, though.  They are fighting and i can’t tell who is right.  I still kinda like J, her style is cute.  The collection of pillows is tasteful. 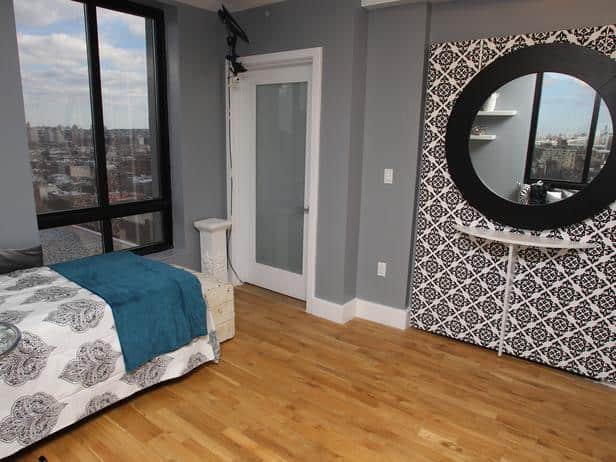 Doug’s wallpaper wall was graphic and unoffensive.  God, these pictures are sad, i’m assuming these rooms are more interesting than this, and that the angles are off and weird, and clearly they weren’t lighting them to make them look better. 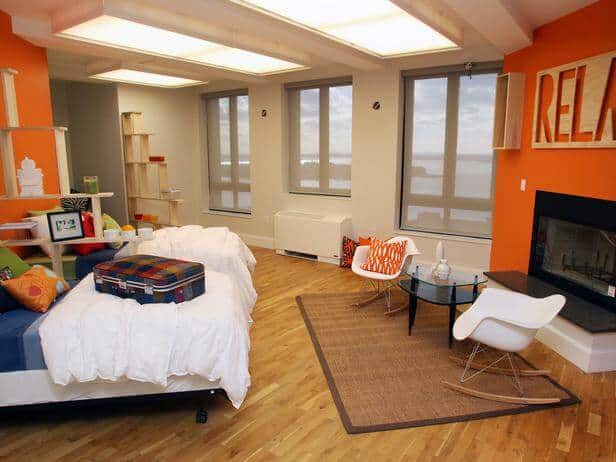 Kevin and Brett are not traditional designers. And yes, this room as major design problems and does smell a bit like cb2.  But i like CB2.  I don’t know, i guess i appreciate that there are interesting moments here.  The suitcase was NOT a dealbreaker for me.  It showed quirk.  Those shelving things were kinda interesting and i’m sure they’ll be the first ones to say that they weren’t styled well.  The tangerine was a bold choice, but at least it was bold.  I’m more offended by that terrible contemporary side table in between the two eames chairs than anything else. I know its not the most successful room, but it showed a sense of youth that the others don’t have.  The RELAX sign didn’t blow me away, but at least it had a sense of humor agains the tangerine wall. And i keep thinking that of course these two would probably not have the typical design show so i don’t need them to do typical design stuff. 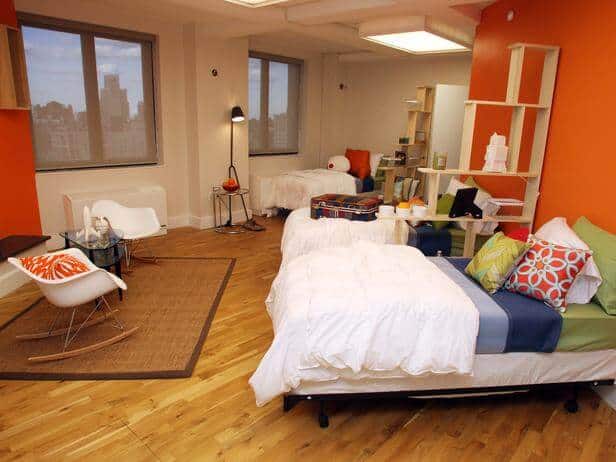 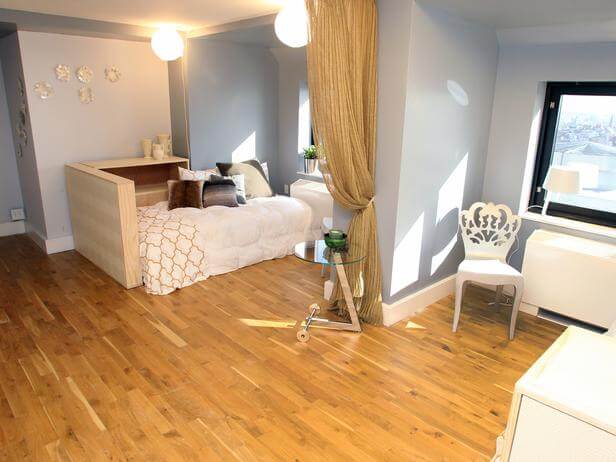 Maybe its because this room has natural light flowing through this photograph, but Mark and Blanche’s wasn’t that bad, and even kinda pretty.  Blue, grey and ochre? i’m totally one board. With metallic gold accents? sounds good to me.  I like the idea of the room dividing drapes, i didn’t think they were  ‘sad’ at all.  Yes, those tea lights blew, sure, but she should have not gone home because of this: 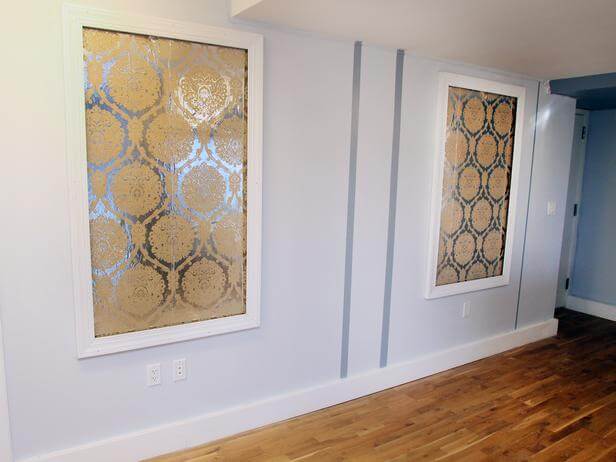 WHATEVER!!!!! Execution, shmexecution.  If she had had more time she would have done a better job. Or in the real world we DO actually hire professional wallpaperers.  VERY FEW people can wallpaper themselves perfectly…it takes mad skills, a lot of patience and a lot of time (unless you are a pro).   If you ever have a designer that says that they can do it themselves, call 911.  Report it to Meg, because most likely that is going to be a design felony (i’m sure there are some out there, but i’m generalizing).  I’ve been through 3 different wallpaperers, all ‘professionals’ and i’ve finally found the best one and she is worth every penny (Ricky, 323-228-5281).  She’s the first one that i didn’t have to redo at least one panel.  She is the best.

So no, i don’t think she should be blamed for execution.  BUT heres the deal:  the judges are up there for like over an hour with the designers so sometimes they realize something about their personality that keeps a designer in the game or takes a good designer out of the game.  Maybe she didn’t know how to defend herself, or she was super shy, or she was over-defensive or annoying or some sort of ‘host’ red flag that told the judges that even though execution wasn’t the best reason to send someone home, perhaps it was the best excuse.  The reason i stayed in beyond my utter lameness of the white box challenge was because the judges liked me during those hour long elimination sessions.  So i’m guessing Blanche didn’t bring it in front of the judges.  At the same time, i totally feel for her.  Being the first to go is kinda a nightmare.  BUT, Dear Blanche, you just happened to be the first.  It could have been anyone.  I came within an inch of my hosting life from going home, and then you know what happened. No one thinks you were the worst, just the first.  I actually liked the idea behind the wallpaper panels and i liked the idea behind the headboards.

I’m scrutinizing everything except the actual finished designed rooms because i don’t truly believe any of these designers would walk away from these rooms in the real world, thinking ‘Honey, call Elle Decor because i’ve got a room that will knock the ankle socks off of America!!’  I’m looking at the individual choice of furniture, color palette, the way they carry themselves, the way they treat others, the way they act during their interviews, the risks they take or don’t take.  As soon as it gets down to like 6 people then, YES, they should start impressing us with their final rooms, but for now they are all just getting their footing and figuring out what the judges want, and how to impress them while still being themselves.   So i’m looking to see if i want to hang out with these guys or if they have really tacky and cliche design instincts.

So far here’s what i’m thinking:

Kelly is adorable.  Meg is charming.  Brett might not be experienced enough, but i bet he’s creative and has good taste and fun to hang out with.  Kevin is either going to take this competition because he’s not properly trained, or he’s not – because he has no idea what he’s really doing.  Kathy is either going to turn a corner and win big or lose really really hard and be the Nina of DS6.  Leslie is either going to turn into a villain or be the sweet, fun southern chick that everyone wants to be friends with, kinda the mom of the group.  Mark seems a little too good to be true, so he’s all up in the air, i hope he doesn’t turn into a pompous designer.  Karl and Tyler seem to be pretty on point – nice, friendly, they don’t take themselves too seriously and seem pretty talented so far.  As far as Doug, i can’t tell.  And I hope J doesn’t continue to be hard to work with because i like her enough to want her to stay for a while.

I think that’s everyone.  I hope i’m constantly proven wrong and shocked throughout the competition.  But so far these are my instincts.  But I also had no idea that i would win, so my instincts don’t really mean sh*t.

What are your instincts??  Be nice, though.  Chances are these guys read my recap so don’t be mean, just honest.