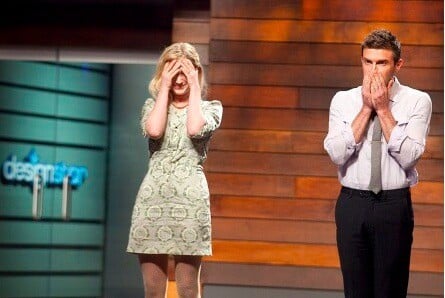 I can’t believe I won.  I mean, i can, but i can’t.  What a secret to keep, and i’m a bad self-secret keeper.  I can keep others, sure.  But i have no secrets of my own because, i’m the most transparent person in the world.  and i like to talk. a lot. obviously.
So keeping this GOOD of a secret was sooooooooooo hard you have no idea.  I feel like lied to all of you, pretending i’ve been really busy styling shoots, when really i’ve been creating and shooting my special. (ahem, that airs next sunday at 7pm and 10pm, just like Design Star)
AND BOY am I so excited about that i could wee in my little vintage house dress.   Working on my own show was the most fun i’ve ever had in my life.  The hours were crazy and the days really long and I had so much more responsibility than i’ve ever had, but it was truly a blast and I was sad when It was finished.

And I love how Ian’s house turned out and kinda don’t understand why its not mine. (cut to me showing up every morning, creepily making myself coffee, signing for packages, DVR-ing Rachel Zoe, marking ‘hers’ and ‘his’ toothbrushes…)

But back to Design Star. It was all so surreal.  I was pretty calm during the entire studio session (about an hour), i just pretended like they were my friends and i just tried to be myself.  To say i wasn’t nervous isn’t true, but I was just like, ‘well its me or not me, but acting differently or trying to impress the judges beyond being myself at this point is only going to make them question me….and think i’m weird’
I remember waking up that morning and thinking, ‘ok so today is the day that i get told by the Design Star judges whether I will get my own TV series.  Perfectly normal.  right so today is that day, huh.’  It was like living in a dream.  It felt like there was no way this was actually happening, that I made it this far after stumbling so bad at the beginning.
When Vern announced it, I was shocked.  I think my hearing shut off and in slow motion i looked over at the screens and saw that only my tv was still on.   Michaels was off.  I looked back and saw the other designers coming towards me smiling.  It was like a car crash, it happened so slowly and my memory is pretty blurry.
But I won, folks.
Of course I knew it was a possibility or I never would have auditioned and left a job (in the middle of a shoot, btdubs) and gave up weeks of work, risked humiliation, etc etc.  I knew I could win and I knew that someone should have a style show like the one I am envisioning, but actually winning seemed impossible to even think about.  I mean, who wins their own design show?
And it is a big deal.  You know, winning Project Runway and Top Chef opens doors and you get a cash prize, but winning Design Star is like somebody is already on the other side of the door, with a big smile and an envelope titled ‘Your new job’ that could potentially last years and years after those cash prizes are spent.  You don’t just get a mild form of design-geek fame, you get a really exciting new life and job.
(with lots of free stuff, maybe? ooh, yes,  I prefer age-defying beauty products, gold and leather jewelry, vintage blue dresses…who am i kidding, i’m that person at Costco that will eat a sample the baby food or metamucil because its free).
Oh, how life is funny, huh?  Two years ago I was struggling to get clients in LA after moving from New York.  I was kinda bored and we weren’t exactly Scrooge McDucking it in money.   But I woke up january 1st, 2010 with less fear than I’ve ever had.  This was my year, I could feel it.  I started a style blog (hello), auditioned for a reality competition show, and its turned out to be one of the best years of my life.
So here are the lessons learned:
Take Risks.  and Watch HGTV.
I’ll have a behind the scenes and post pictures of my space tomorrow,
ooh and pictures of the party right now, post sneaks of the special, etc etc.
But for tonight:
Thank you.
very
very
very
much.
I am an extremely happy little blonde.