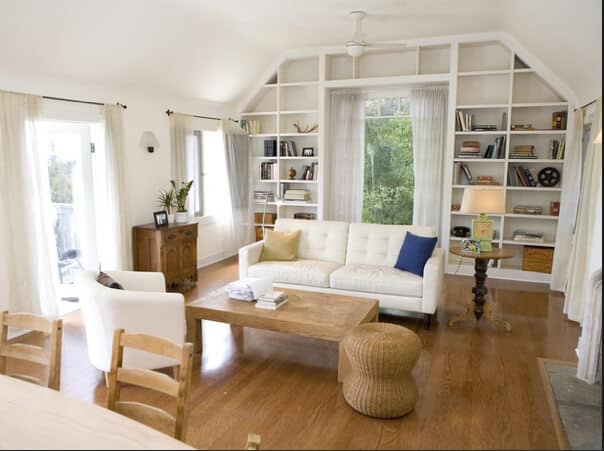 Ahhhhhh!!!  Thank you so much.  I don’t really know what else to say except that i could have woken feeling like crap today but instead i woke up feeling pretty amazing, although totally tired. My brain is a bit full.  it doesn’t take a lot, its a pretty small brain, but it might be at capacity right now.

I’m not sure if you guys want more from the house, but i’ll just post a couple before and afters here and talk about some stuff that maybe didn’t get talked about last night.
Here is his living room, ‘before’
After:

Here was my inspiration board that i was working with:  Things changed a bit, as you can see, but the general look feels the same.

Ok let’s go around the room.   The coffee table, sofa, pouf and lamp were all new.  Coffee table ($1300) , sofa ($900) from HD buttercup and standing lamp (anthro $398).  The pouf was $200 from Mosaik in LA.  Everything else is vintage and came from either TINI, Hernandez brothers, 45 three modern and the flea market.  So yes, the coffee table and table lamp were splurges, but i saved on everything else – i mean some of the side tables were $20 and the pillows were just 1/2 yardage that I bought for 10 bucks.
I think that coffee table (while i couldn’t afford it) was worth the splurge because it completely grounds the room, makes it look high end next to all the thrift store pieces and is heavy, but since its metallic it doesn’t weigh down the room.  And it has storage.
Oh and In case you don’t know my feeling on legs,  you should try to have at least one piece of furniture that doesn’t have four legs, whether its a really low sofa, or a skirted sofa or chair or in this case a coffee table, it helps the whole space look more grounded and substantial. I forget who said it, somebody from house beautiful, but a designer said that a room with too many legs looks ‘nervous’ and I totally agree.
The paint color is BM Smoke embers, and i LOVE it.
The artwork is controversial, i know.  I think its awesome, while some people think its creepy.  Here’s the thing with artwork on TV shows:  it is super super hard to get things cleared, meaning that the original artist or their family (if they are deceased) has to sign off on it to the network – and its normally super hard to track down who the original artist is – especially flea market art.  (this is not the case in magazines, i don’t know why).   I’m not an artist, so i can’t make my own art (although i do have a few ideas of weird collage-y things that I can do).
Luckily Ian loves vintage maps, because those are cleared. And he loves antlers, which worked perfect with the FDR look. oh and to the critics who say that antlers are ‘out’, i disagree. Sure, they were ubiquitous a couple years ago, but things that are beautiful are never ‘out’, we just don’t need anymore cardboard antlers or maybe high gloss pink antlers.  Its like how coral was so huge 5 years ago.  Now people are repelled by coral, but coral is beautiful. just buy one natural piece to display, not a bedding set with coral all over it.
Back to the room.  Here is the more sixties look.

I actually really like it, although it just feels too art directed.  It definitely looks more ‘designed’ which is exactly what Ian didn’t like about it.

And the shelving was a bit west elmy and cataloguey.
That rug is from Ikea, i’m sure you all knew that. its pretty great for $179.

And as much as i like the idea of doing something to the back of  shelves, i knew that Ian wouldn’t ultimately want to live with it – otherwise i probably would have wallpapered back there.
Ok apparently my brain is too tired to blog today.  I mean, what a boring post.  Sorry guys, i’ll try to do a better one tonight.