You know those projects that you say “yes” to and afterward (hell, during) you can’t stop asking yourself, “Why, in the name of Meryl Streep, did I say yes??” Well, this is the opposite. This was one of the most rewarding projects in every way, not to mention it was such a great opportunity for me.

To celebrate this decision — and the result of it — it’s going to be week – o – “House of the Year, ” on the blog, documenting the redesign that is now featured in a big old spread of the September issue of Country Living Magazine. Run, don’t walk to the newsstand and YES, pay for a magazine. Support the industry that started all of our careers, please. 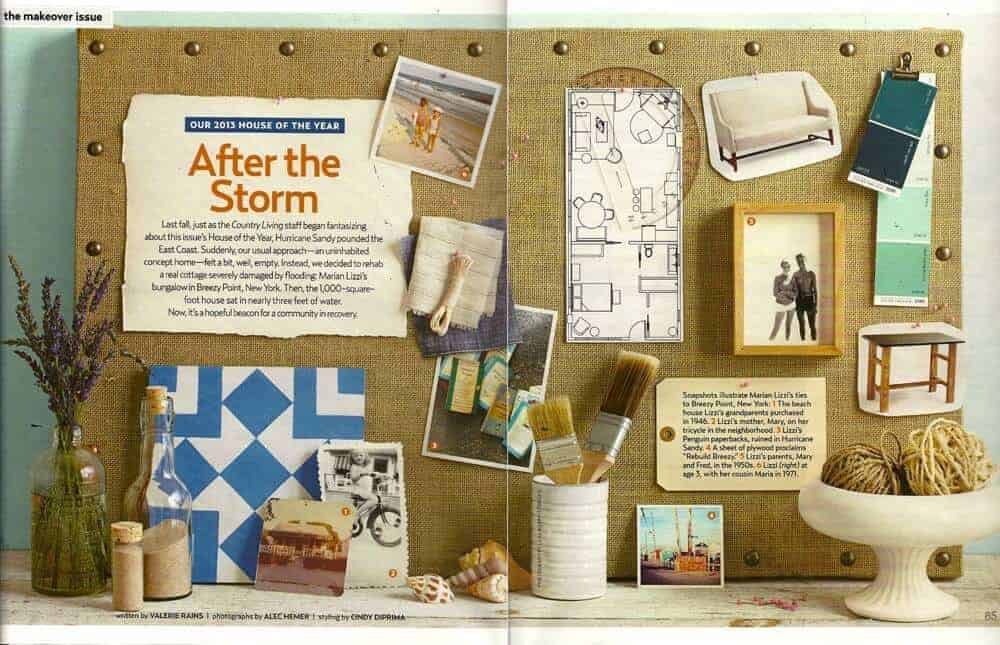 It will be a ton of information, from the “befores, ” the “why’s, ” and the processes to the mistakes, “afters, ” and shopping resources, etc. I’ll be breaking it down, room by room, kinda like I did for Studio City House.

Here’s a little background: Every year Country Living chooses one designer (or three, like last year) that has a “name” per say to design a house. This year I was honored with the request and OBVIOUSLY was interested, but then when they said that it was for a house destroyed by Hurricane Sandy, it was clearly a no-brainer, though I was still nervous on how I was going to pull it off.

Here’s  a little video explaining the project and showing off the general design.

To be able to do a charitable house with the resources of a Hearst magazine (aka help, labor, a budget, AMAZING EDITORS — namely Isabella, Natalie and Jami) is such a better situation than, say, me just volunteering to do it myself with my own resources. I knew that with their help we would be able to not only transform the space into a live-able house again, but design it in a way that I was really proud of. Double whammy, folks.

I’ve said it before and I’ll said it again, I want every job to be IDEALLY three things: really fun, career building (good for portfolio, press, or blog content) and lucrative — Charlie will always need a new pair of caramel leather loafers with brass detailing. An ideal client will be super rich, have great taste, let you do whatever you want so you can be super creative and end up with portfolio worthy spaces, and be extremely fun and easy to be around, where you look forward to each meeting.

HA! This rarely happens, and that’s OK actually. I go for two out of three, but they have to be really high in those two categories. I normally choose the “career building” and “fun” over the money because people with a lot of money tend to be the least fun and have the worst taste anyway. (This is why I’m 33, insanely busy, and still don’t own a home, by the way). In this case it was for no money, but lots of fun, lots of personal satisfaction (as only working for a cause can be), and a great portfolio/career piece that I’m super happy about.

When I first saw the space in Queens it looked like this: 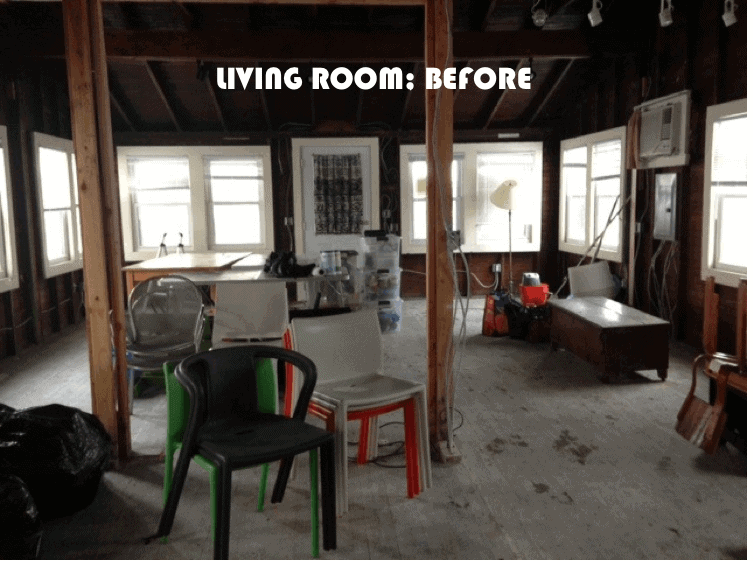 It was freezing (in January) and pretty much destroyed. That furniture (I think) was Marian’s furniture, but she wasn’t committed to any of it. The water damage from the storm ruined virtually everything — the walls, floors, furniture … down to the studs, and not the good kind of studs. Riddle me this, HGTV, how are there not more TV reno shows with the word “STUDS” in them? “Down to the Studs” would be the next “Holmes on Homes.” “House Full of Studs?” C’mon. I’m dolling out free TV gold over here. 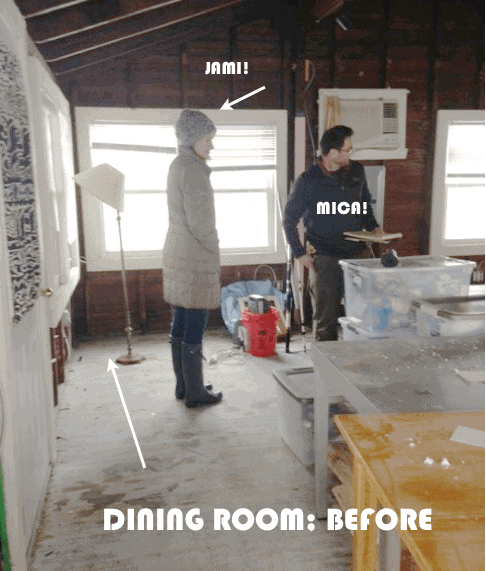 Well, this is kinda the “before.” Truly before the storm the dining room was its own room, but after the walls were knocked down this became the dining room corner.  By the way Mica (up there) from Deary Construction was the general contractor and he was really really awesome. If you are in the New York area (they are based in Brooklyn) and need a contractor, call them. It’s two brothers and they are super talented, were hip so they had good taste and suggestions, were so easy to work with, pleasant, honest, etc. 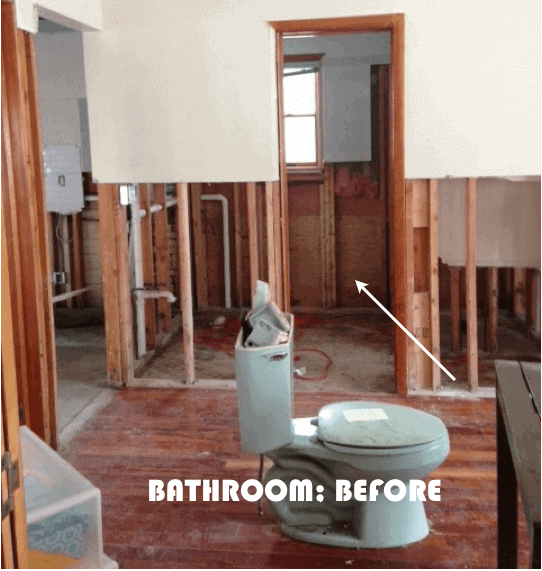 It was tricky because I’ve only done two renovations at this point — one in LA and one in New York — and trust me that cross country makes it MUCH more difficult. Obviously there is a learning curve with such a big project and not being able to check in daily was difficult. I was nervous to say the least. I wasn’t sure how I was going to manage it with my schedule. But they had an amazing project manager, Isabella Patrick, and a great designer/editor, Jamie Supsic, that were on the project. I basically art directed and they really helped design it, and certainly dealt with all the minutia. It got to the point where I was slammed here, and I trusted them so much that I just said “Whatever you guys think” and they always made exactly the decision that I would have made. They were and are amazing. 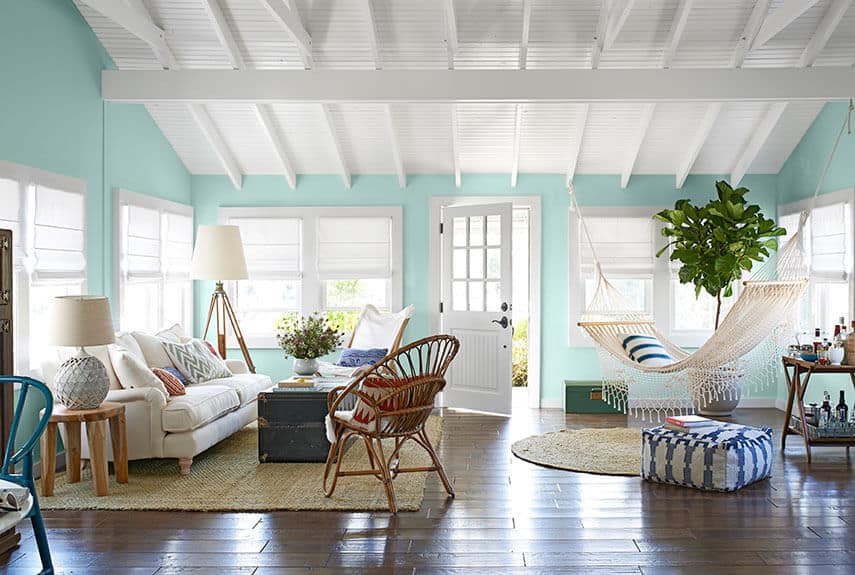 Here were the goals:

1. It needed to be live-able. Duh. It was totally destroyed in the storm and Marian obviously couldn’t live there and couldn’t afford to fix it up. So she was just stuck. Clearly there are so many people in her situation that don’t have a major magazine and designer to step in and help and obviously we wish we could help all of them. Marian was just so grateful and excited to have kinda won this opportunity. (The magazine basically put out on social media that they were looking for a Hurricane Sandy victim and she applied). 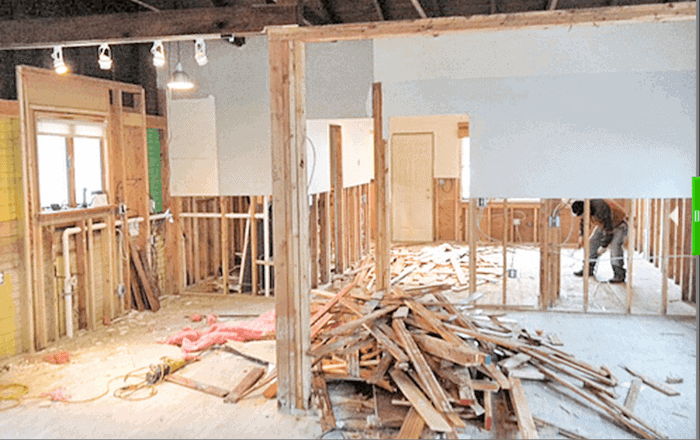 2. It needed to have a better layout than it did before. It previously was super chopped up, with two bedrooms, a living room, a kitchen — all with walls in between. It made it feel teeny tiny and just not terribly inviting for guests. Entertaining was impossible. We got rid of one of the bedrooms and opened up living/dining room so it had an open floor plan. It’s just wildly better. It feels so big and airy. 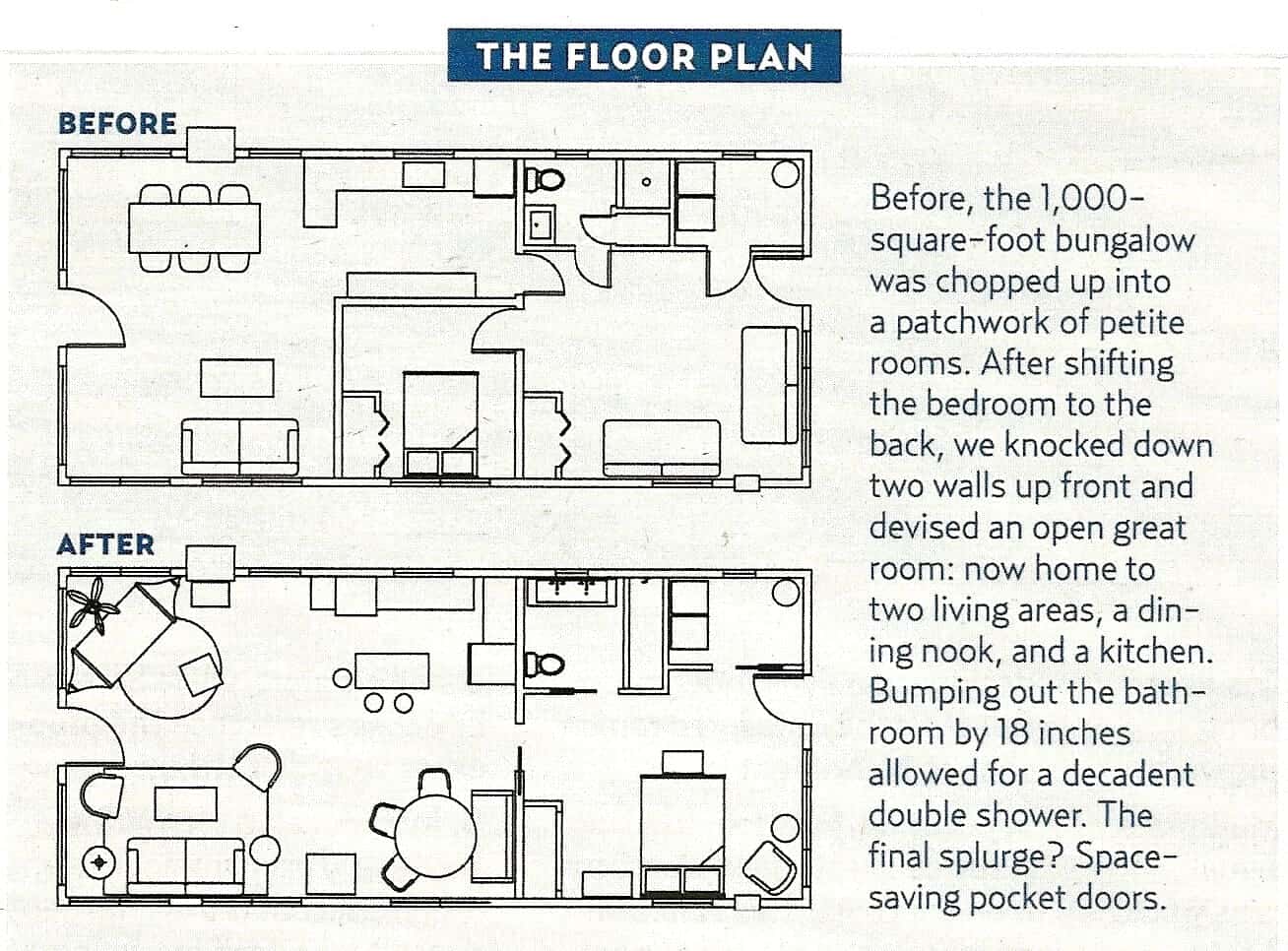 3. Stylistically we wanted it to be really bright, airy, beachy, happy, and casual but not too young. We wanted some antiques to give it a soul, but enough modern fresh pieces to look like 2013. We wanted it to be more East Coast vintage, less West Coast vintage. So we kept the color palette really bright but with enough contrast to make it exciting. Here’s where I started: 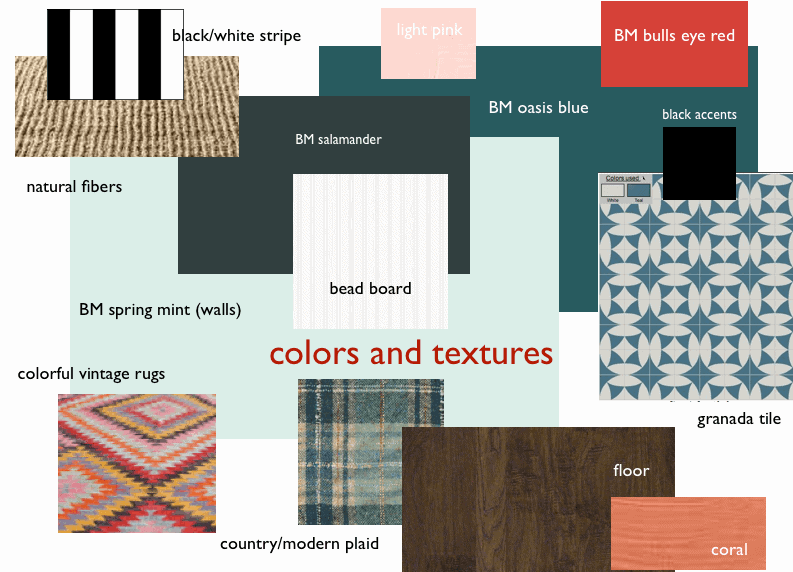 A lot changes from the initial concept for every one of my projects (which I think is normal, right?), but you can see the general vision of where I wanted it to head and how I wanted it to feel eclectic (of course) yet sophisticated; exciting yet casual; happy yet calm. And the key to doing that in a smaller space is through texture, color, and pattern (but no crazy patterns).

Here were some of my initial inspiration pics: 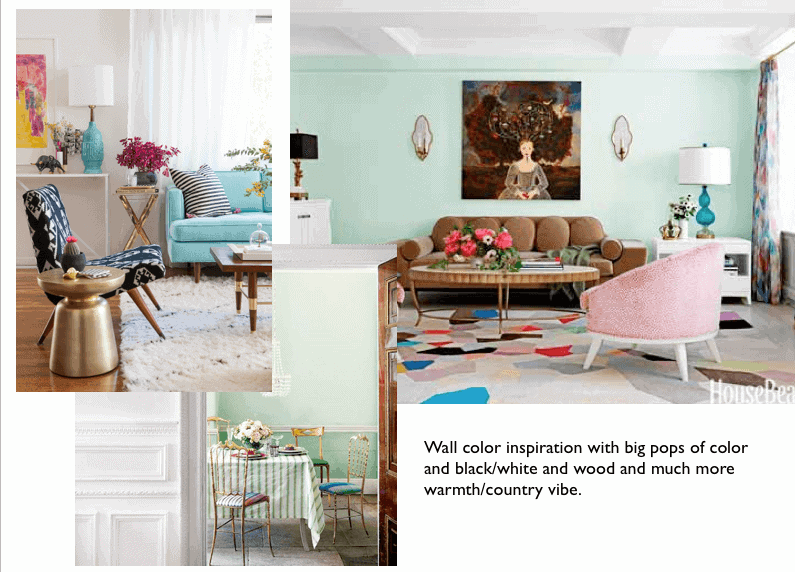 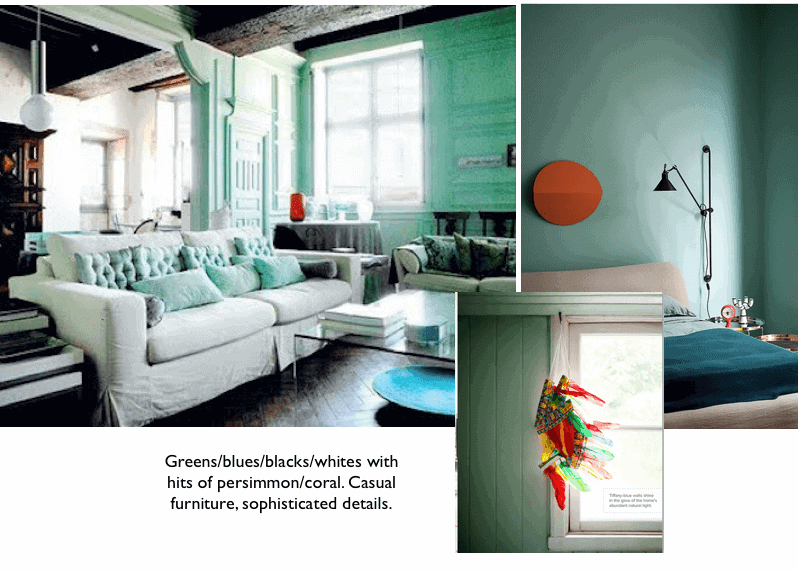 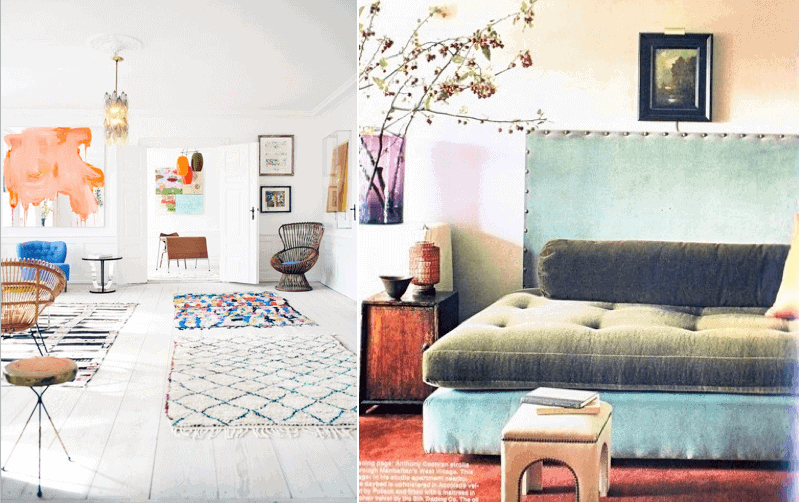 Happy. Everything is always happy. I realized that if I had to describe my style in one word it would be happy; no matter what style, color, location it is as long as it feels really happy. I’m … yes …  happy. And so is this house. I, nay, WE ALL, wanted to live there so bad once we were totally done with it.

Come back tomorrow for Part One of the HOY makeover, starting with the bedroom makeover, which includes a shark attached to the wall. FINALLY. xx