Yes people, we at EH Designs love to stare at screens and play with pretty things. That is pretty much all that makes up our day. We wake up, look at screens whilst playing with pretty things then when we can no longer keep our pretty eyes open to look at pretty things we go to bed to rest our eyes, hands and bodies. Then we wake up the next morning to do the same thing. I mean life is all about pretty things and staring right?!

OK, OK, there is much more that happens in the lives of Emily, Ginny and Brady and especially here at the job. But, judging by the below pictures it may look like all we do is take a picture, look at our computer screens, move things around, take a picture, and then do it all over again in a different location. 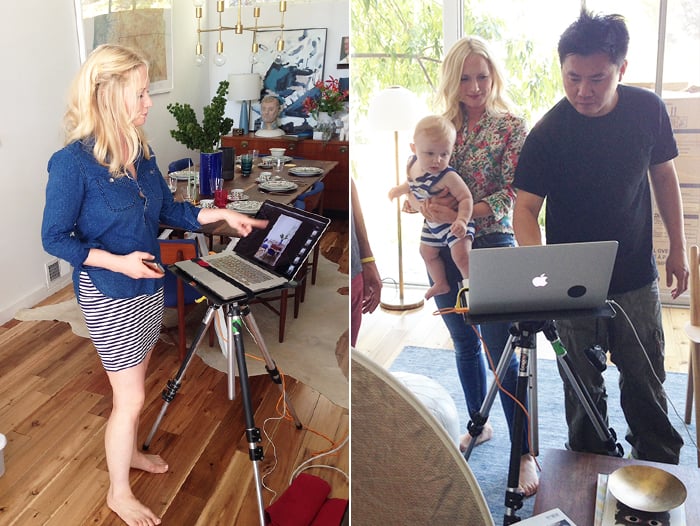 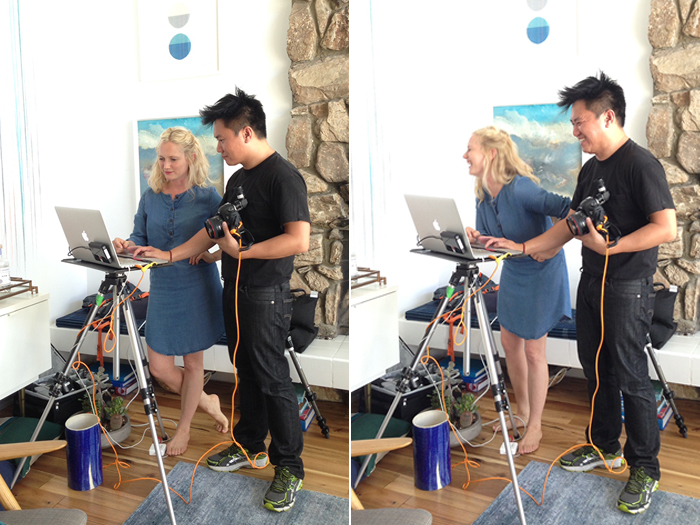 I’m pretty sure during this last one either David or Emily passed some major gas, I mean what else would be that funny as to make them both bust up laughing from one frame to the next.

I digress … Last time you heard from me, we were in the midst of shooting the book, well we can officially say that for the most part all of the shooting has been completed and you better get your gift cards ready folks because we have some beautiful spaces in store for you in that book. Unfortunately I can’t show you too much as we want to actually have a book to show to you but here is an idea of what goes into getting a book put together.

Here’s what we’ve been up to:

This last month we tore apart our new studio time after time to create 15 different style-specific vignettes, and 4 different full living room shots amongst other things. In order to accomplish all of it, our office pretty much looked like this on a daily basis. Ginny was a total badass and tore the internet apart and rented just about every chair, light, and accessory known to man! She killed it with the props she found and the images definitely show it. 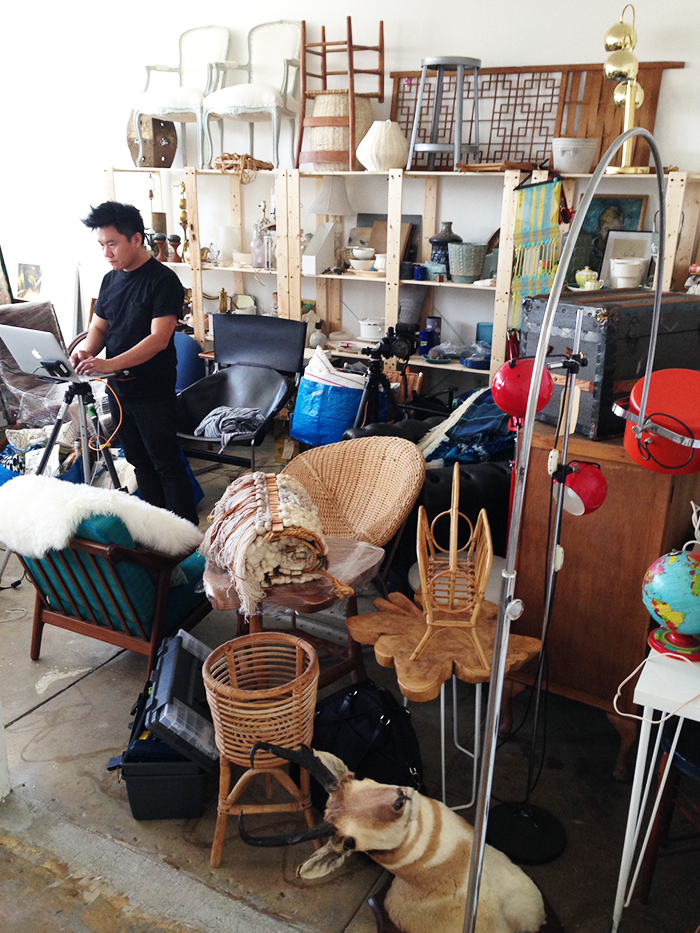 2. Midnight runs to all of our favorite retailers:

Emily loves her options (I learned this lesson my first week on the job) and when you have to style out so many different rooms you really DO need options. My cart was filled to the brim time and time again. This image represents just one of the many separate trips we all took to different retailers. While I did “shop til you drop” at one large scandinavian retailer, Emily did the same thing at Target, and Ginny conquered the West side shops. 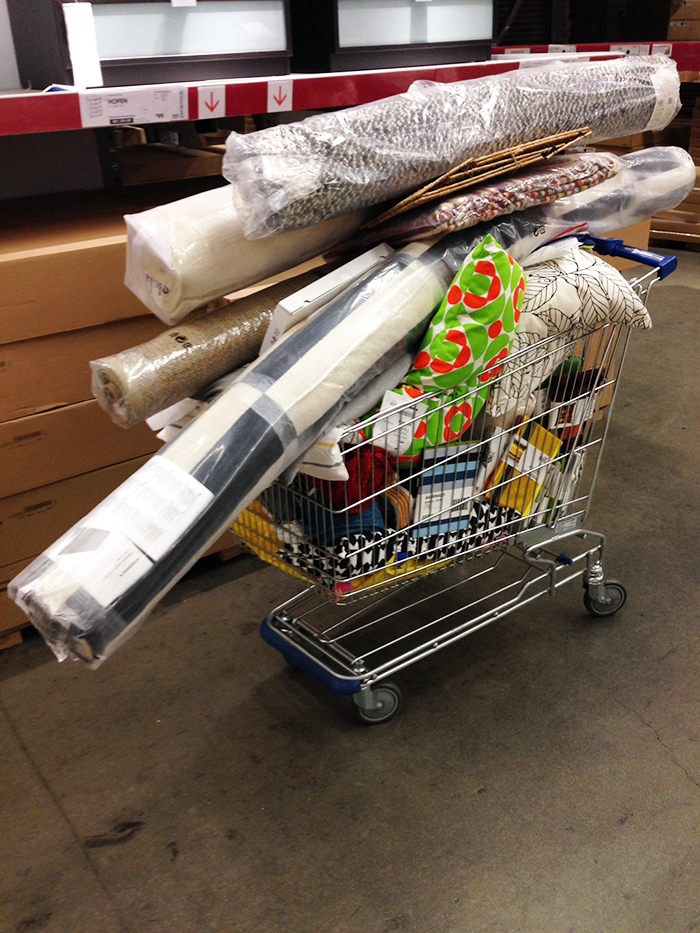 3. Stuffing things in places where they don’t belong:

There was no corner or empty floor space that was safe. Basically we had to always have one clean area of the studio where we were shooting the current shot. In order to do that everything was shoved to one side of the room or the other. It was like a fun furniture tetris game, or an episode of “Hoarders”. I’ll let you make the final call on that.

Our cars were also not safe from the “hoarding”. On one occasion I had to run out to pick up a chair after we had finished at the office and lets just say that my results were not so successful. When I spoke the the gentleman on the phone he told me the box was around 2 ft x 2 ft so I assumed like any normal human being that the box would in fact be 2’x2′. When I arrived I found that the box was a tad larger than that.

I had to unpack to the box in a very busy parking lot during shopping rush hour to find that to my dismay the chair was completely assembled. It took some moving around… and when I say “some” I really mean A LOT. I mean can we all please notice that the sun was up when I got there and the sun was down when the chair finally found its final resting place in my car. Tick Tock, Tick Tock, oh the woe’s of gathering props!

4. One very happy mother with child in tow: 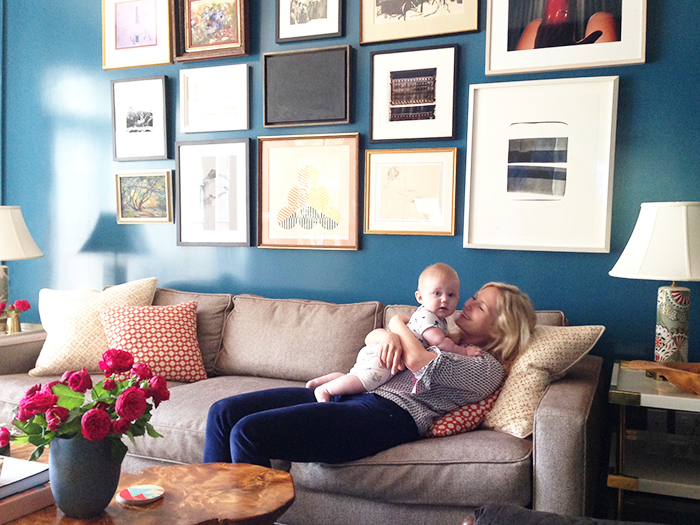 We’ve got lots more in the works people and don’t worry it involves much more than staring a screens and pretty objects so come on back to see what we are making a mess of next.

TGIF. Now back to staring …