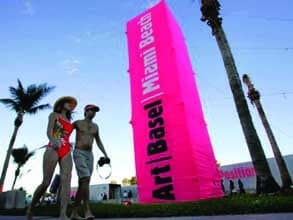 Art Basel, with a side of room service.

Which is pronounced Bahhh-zell, by the way.  Orlando corrected me from saying bay-sil, and i was like OF COURSE, YOU, Oar-lawn-do would say bah-zell. But then i realized that i was the idiot, he’s right (per usual) and its a proper-noun-ian place, not an effing ‘herb’.  (‘herb’ by the way is pronounced, most assuredly, with a silent ‘H’)

So i’m here by myself for now, cruising for entertainment and adventure in South Beach.  The only/last time i was in Miami i was with my best friend 6 years ago and she was lamenting (i was celebrating) her breakup with the wrong guy for her.  The amount of Bostonian men we met was out of control – in a bad way. And she was sad, etc, which made me sad. So i’m excited to see Miami for two nights and only one full day again, kinda like the first time.

Im here for David Bromstad’s big unveiling of his art show I, Bromstad.  David’s style is like mine (or any artist/designer for that matter) either you are with him or not.  Regardless he is a charmer, he’s hilarious and extremely nice and popular.  And sometimes he wears rhinestone encrusted shoes.  and thats funny.

So HGTV has me and Meg Caswell (Design Star season 6) here, in Miami, to celebrate with him and mingle at the party. Yes, i like getting flown around to parties.  Yes, i like staying in suites. Yes, i like HGTV.

So tomorrow is my day to see Art Basel, so if you guys have recommendations, clue a girl in.  The concierge has given me a bunch, but hearing from you guys would be awesome.