How to copper leaf a 99 cent store candle.  How to take it from ‘meh, i’m just white’, to ‘start a party, i just might’.  From ‘utilitarian’ to ‘universally awesome’.

Welcome back to the ’99 cent story diy makeover’ series that i did for HGTV.Com.  You can see the first one (doily bowls) HERE.   99 cent stores can be full of garbage, its true, but also sometimes full of very simple everyday objects that, by their very disposable nature, make them worth the very small amount of money they cost. Buying a 99 cent store pasta strainer isn’t a good purchase – it will break holding its first penne.  But the stuff that you are supposed to run out of is more worth it to me (aka, windex, sponges, candles, toilet paper, kids coloring books, etc).

I’ve always like the simplicity and these candles – they are just clear glass, white wax and a white wick. It’s not trying to be fancy or smell like roasted apple rosemary pie soap in May, its just totally utilitarian. 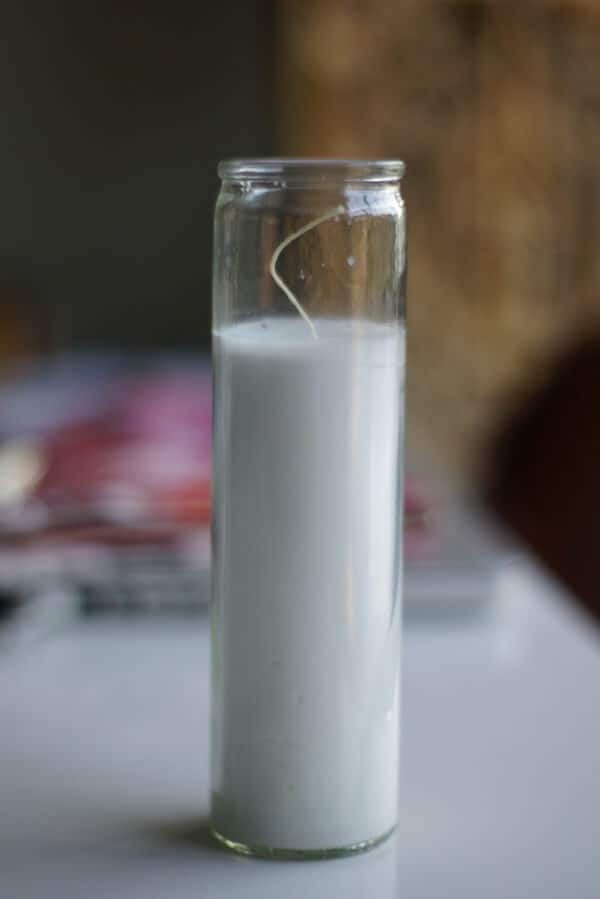 These bad boys are perfect for dressing up, to make over, to turn into something special and dare i say glamorous?  Dare, i will and dare i did.

So here’s what you need:

I used this brand and they cost around $12 – $15, including the glue.  This DIY isn’t terribly cost effective if you only do a couple candles, so i would do at least 10 to make it worth it.  It’s crazy easy once you get started, and super fast so making 10 would probably only take an hour or two (dependong on your pattern).  One packet of gold/copper leafing can do at least 10 candles so then it becomes pretty cost effective (like $2 a candle). 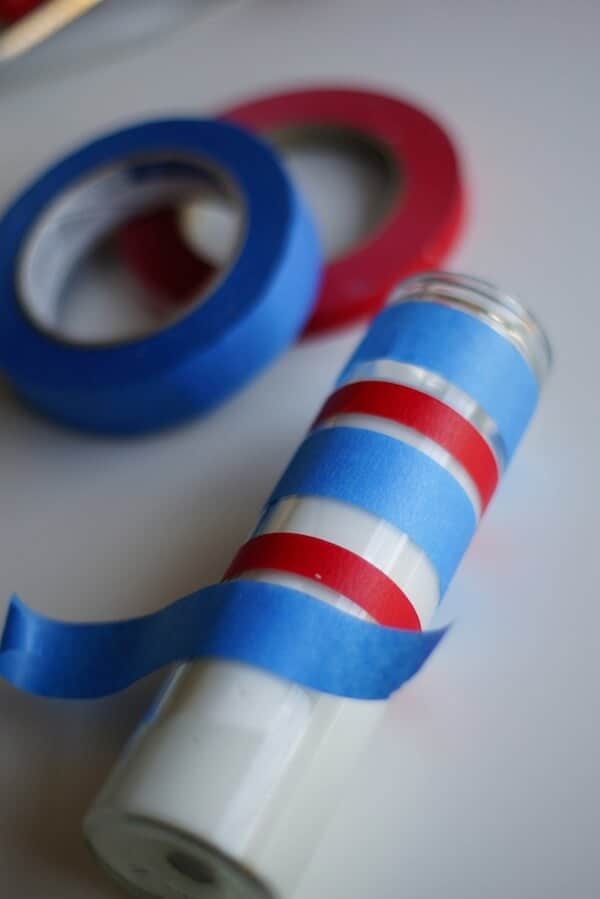 Tape it off. You know the drill – use painters or paper tape (not packing or duct). I don’t like to measure, so i decided not to do standard perfectly spaced stripes, instead to have different sizes of stripes so you kinda can’t mess it up.

Because that’s how i roll – i only do DIY’s that i can actually DO.

My self-esteem just can’t handle another ‘lacquer’ job by yours truly, those years are over.  But copperleafing? Totally.

Then you paint the glue on the untaped stripes. You let it dry til its tacky (like 10 minutes) then you place the copperleaf (or gold leaf) on top of it.  You can either do it neatly or messily – both looks work. Obviously its easier to be messy than neat, so that’s what i chose.  I’m lazy like that. 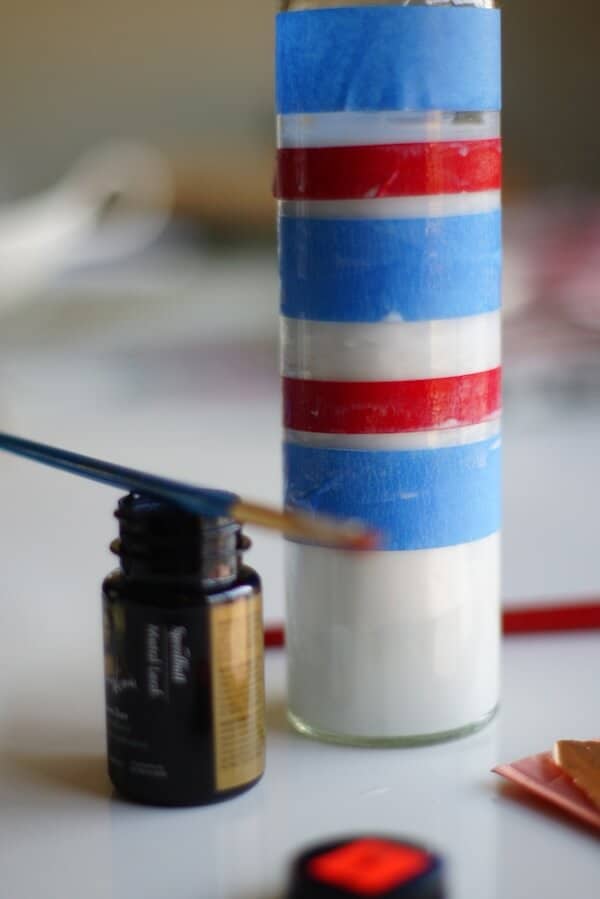 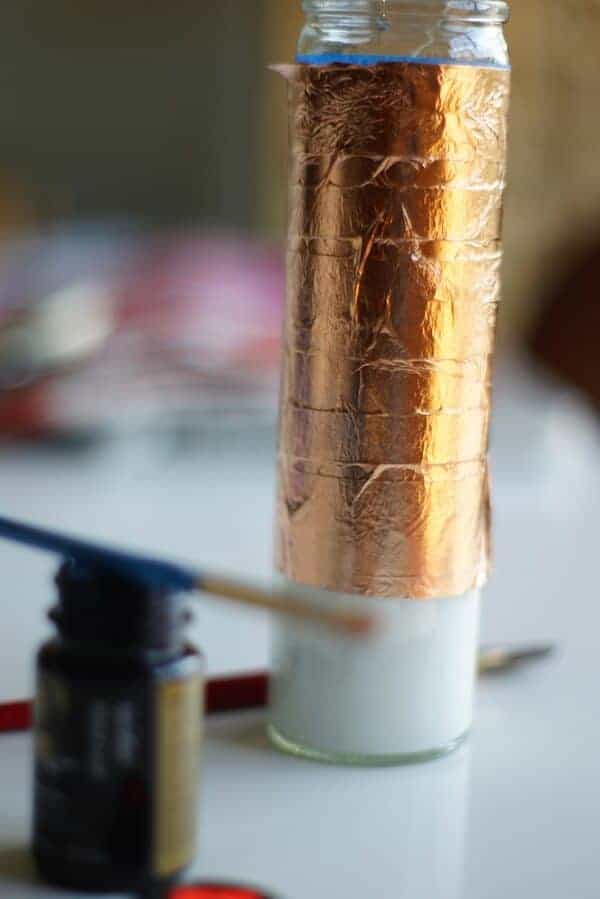 The leaf papers are VERY thin and will rip EXTREMELY easily, so you have to be kinda careful and just place it on top of the glue and press lightly.  It’s extremely satisfying to see how glamorous it can become so quickly. 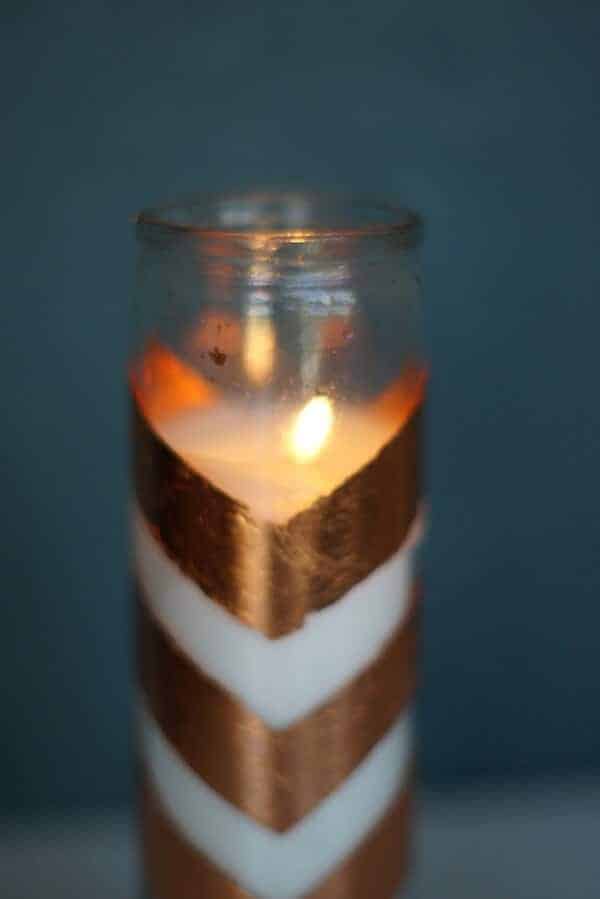 And sometimes I do chevrons.  Not sure if you’ve heard of a ‘chevron’, not the iconic gas station but the ubuitious pattern of choice these days (that i say is totally great and fine if you keep it to 1-2 pieces in your house).  It was a hit and i think that it ended up in Bri’s bedroom.

Where to use these guys:

1. In the guest bathroom – duh. With a pretty box of matches.

2. A patio party – where you need a ton of light but don’t want to splurge on beautiful hurricanes that can get broken when your drunk friends are dancing to ‘Call me Maybe’.  Remind me to film and post Brian and i doing ‘The Lift’ from Dirty Dancing.  And if you feel like having an excuse to get a new chandelier call me over and we’ll do it in your living room and potentially break it.  True story.

4. Give as holiday gifts to everyone that you like enough to give them something that is personal and special.  Think co-workers, vendors, fellow bloggers, etc, etc. Just tie a bow around it, you don’t even need to wrap these bad boys.

5. Give them as party favors.  I would be PSYCHED to get one of these as a party favor and in general i’m not terribly into party favors.  Even swag bags which i’m ever so drawn to at first tend to have weird granola bars and hair accessories i’ll NEVER use. But a copper leaf candle? Yeah…. 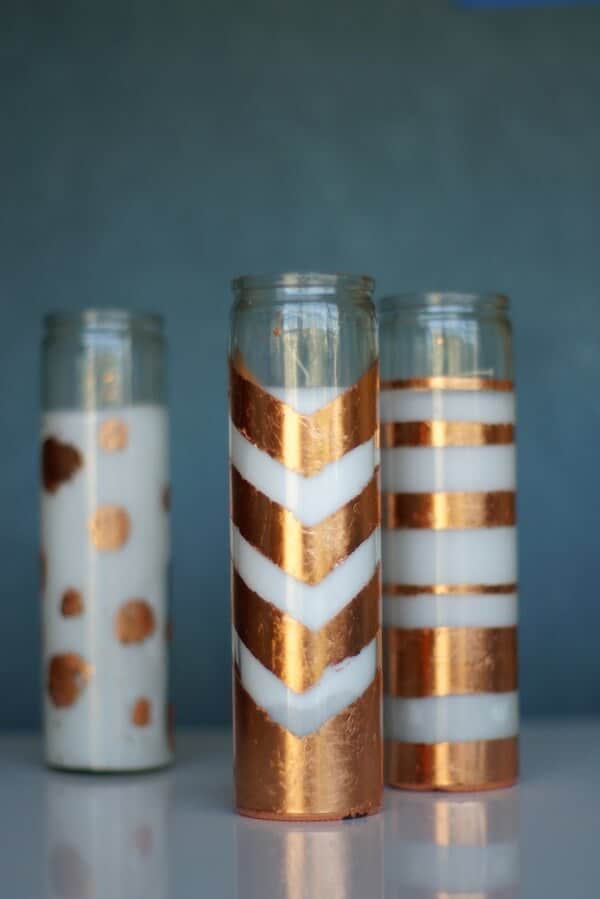 Other ideas if you are feeling more brave?

Both gold and copper leafing together on one candle thingy.

Just do the bottom half (yes, color block that thing with gold or copper leafing)

Use acrylic or watercolor paint instead of gold/copper/silver leafing.

I would keep it relatively simple because the more laborious this candle looks, the less chic it looks. It’s like trying to trick out a Hyundai hatchback.  It just looks silly and seems like a waste of money.  Don’t throw too much money or time on these things – keep it fun, cheap and imperfect.  Like me. 🙂

Check out my doily bowls, and expect something involving hula hoops soon. 🙂 Go to HGTV.COM for constant DIY information on everything with some pretty dope videos by my friends Brian Patrick Flynn and Dan Faires.