I once kept an egg roll in my fridge for over a year. And the only reason it is no longer in my fridge is because I moved, not because I reached in and threw it away. I was 22, living in New York, rarely ate at home and thus rarely opened the fridge. Every time I did, I thought I should throw that away, followed by Ooh there’s the ketchup!! Then I’d shut that door and eat my french fries with the ignorant bliss of an amnesic baby, until the next time I needed a condiment. To be fair, it was full of MSG and totally well-preserved.

Well, my house has one too many stylistic egg rolls. Let’s go through them.

It’s odd to be such a perfectionist in some ways (obsessing about the details, colors or finishes of things, painstakingly choosing each piece of furniture that practically breathes near me). But then behind closed doors, where people can’t see(or where it can be photoshopped), I let ugly things slide for years. Part of it might be because I’m busy, but most of it is my personality mixed with a little human nature. When I was a kid, I cleaned up my room by hiding clothes under my bed and pulling the blanket low enough to disguise the mess. I used to shove any clutter into the closest cupboard when ‘cleaning up’ until last year, when I had a kid and realized that putting my inhaler in the tupperware drawer was just weird and unbearably lazy. If it’s not in my direct eye-line on a daily basis, messing up my visual aesthetics, it doesn’t exist as a problem for me to solve. All pretty here!!!!!! Move along. OOh, Have you seen my pretty 15′ tree in my living room???? Yes it is real. WHY DO PEOPLE KEEP ASKING ME IF THAT OBVIOUSLY REAL TREE IS REAL??????

But every time someone new comes over, I find myself fumbling an apology and making excuses for these unsightly things, because all of a sudden I see these minor flaws through their eyes and I’m riddled with shame. I’m a designer. I should have a low tolerance for ugliness and prioritize aesthetics higher than my own health. And I really do!!! And yet, I clearly don’t all the time.

So I figured to help motivate myself to solve these problems I’d highlight the 12 most PROMINENT, ugly, and annoying things that I ignore everyday. These are the things I see and think ‘Ugh,  I really should …‘ but then I’m ripped out of that thought by the next one, which is ‘Ooh, I wonder if the shot of the seascape collection above the sectional will get more likes for my 7am or 7pm instagram?’ Life is full of distractions. 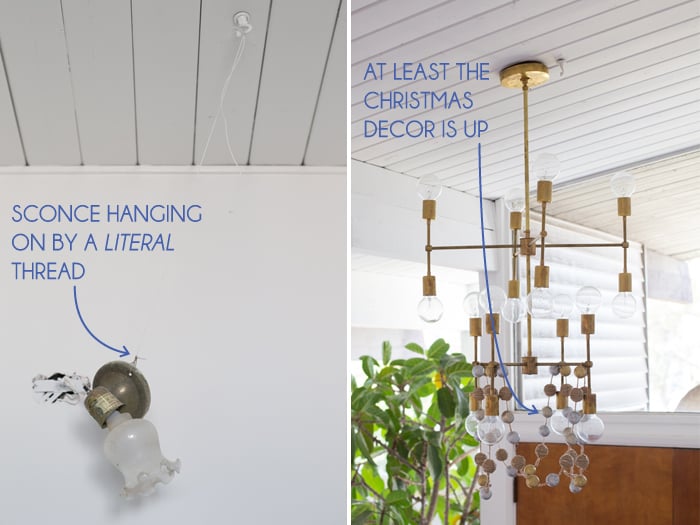 That hanging sconce. We painted the house a year and a half ago and this is how they rigged the sconce to paint the wall and it was never re-installed. It still works, mind you, and we use it every single day, but we haven’t fixed it. It just dangles there by a thread while we floss our teeth and take our showers. As of this week we are remodeling that bathroom, which was my excuse the whole time – why spend time/money on something that you are going to completely rehaul later anyway?

The second one isn’t too bad and is actually kinda friendly. I’m just saying Merry Christmas!! … all year round. It was too high for me to easily clip off without, you know,  grabbing a step ladder. Brady has since removed it because he is a god-fearing, charitable person who donated 5 quick seconds to my cause. Check one off the list. 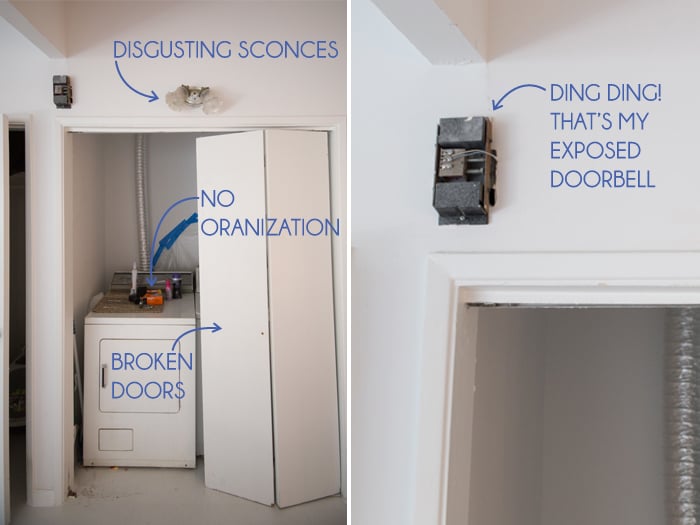 The laundry closet is a massive problem that actually does bother me a lot, and it is not going to be easy to solve. So many needs. I need a new washer/dryer and shelving/organization.  But the annoying part is that both doors are broken. They are strangely not a standard size so they would have to be custom ordered and therefore cost like $400. I don’t feel like spending $400 on an accordion, white, boring-ass door and I can’t seem to come up with another more stylish solution. But this area is in the center of our home, is such an insane eyesore, and visible from all rooms. I’ve got to invest in fixing it, but as most of you home owners know, there are just so many other fun ways to spend that money, especially when you can just photoshop it out like we did here: 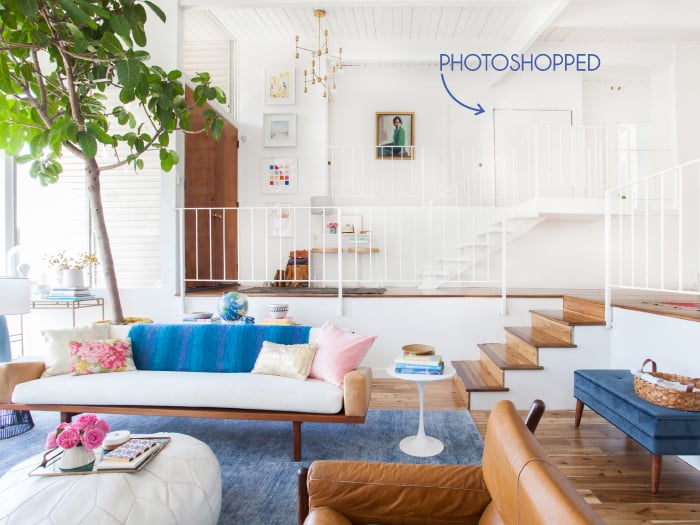 See? Problem solved!!!!!!!!! I’m serious when I say this – after the deck and the bathrooms, the laundry room will get tackled. I just wish that the disgusting washer/dryer would break soon so I would have extra motivation. There is little excuse for that sconce above it, though – that is a CHEAP fix and one that should bring me pleasure. I think that since the whole area is ugly, I just walk by with blinders on. Keep moving. 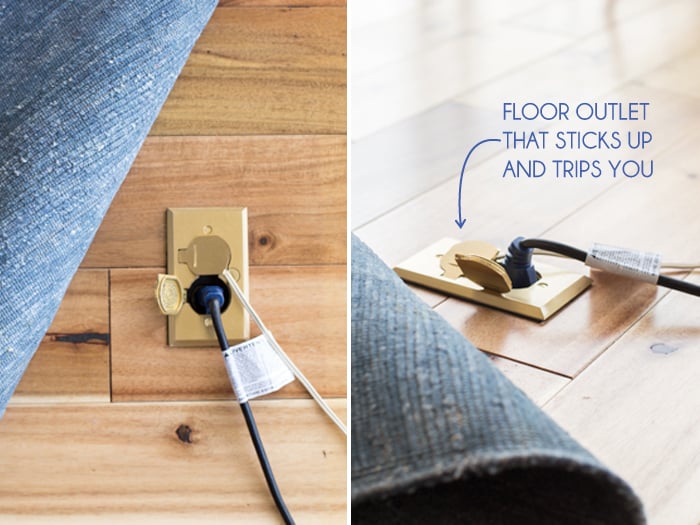 When we installed the flooring we didn’t plan floor outlets – big mistake. So a few months later we installed them (it was $115 per outlet, just so you know). But the guy that did it installed the wrong ones. They aren’t recessed and they stick up, just begging you to trip over them and yes, creating a hump in the carpet. On an annoying scale from 1 – 10 it’s a 6. Why didn’t I have the electrician fix it? Well, as you’ll see in other areas of the house (see below) he was a less than incredible electrician (you guys, that is putting it so lightly) and our language barrier was high. By the time he was finished ruining a lot of easy, innocent projects, I just said thank you!, paid him and rushed him out. Sometimes you have to admit you hired the wrong person, cut your losses and move on, instead of creating a terrible situation for everyone involved. I swore I would fix it, but calling another electrician sounds incredibly boring. For the record, at first he just put in a standard wall outlet in the floor. Then I showed him a photo of a recessed one and he replaced them, but they should slide and the cord should go in even further. These are still wrong and it’s all so annoying. But totally fixable. I wonder who is going to fix it…

Just for reference here is where it is: 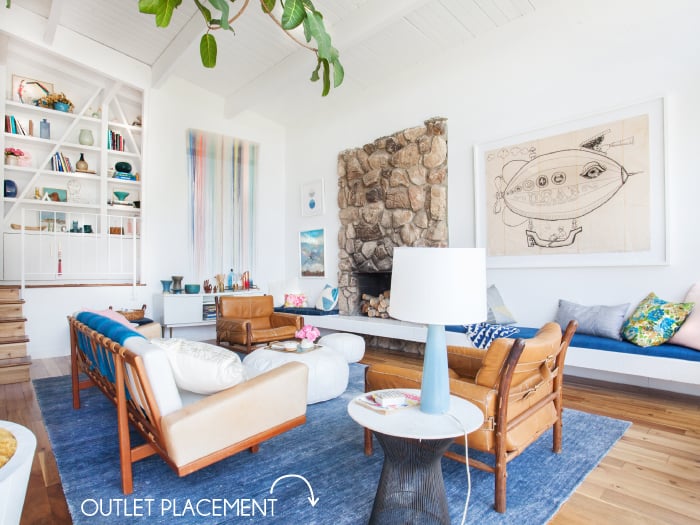 I think in that photo we photoshopped out the rug hump. Typically we have that table over it, closer to the sofa. Although that table is gone for now since it’s not terribly kid-friendly (top heavy and random pokey things coming out).

But more about that electrician: 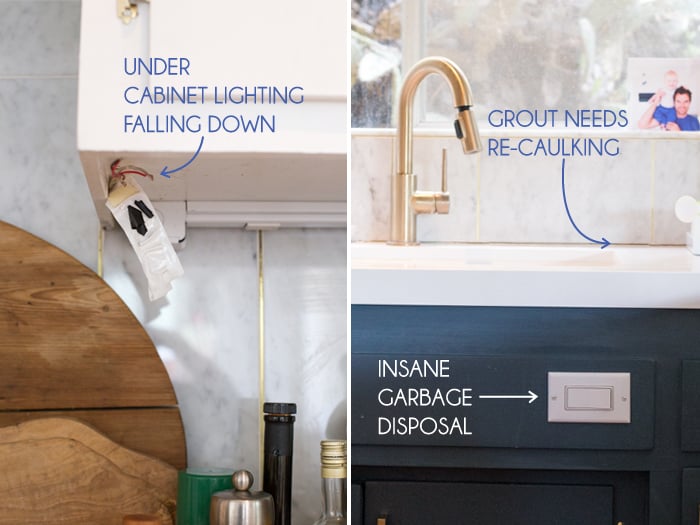 He installed that beautiful under cabinet lighting that is perfectly up to code and doesn’t threaten the safety of my loved ones on a daily basis at all. I didn’t notice it at first – I used to be way too accommodating with my own house, not inspecting everything with an eagle eye, just excited the project was done. It fell down a few weeks later and that is how we live with it everyday.

What could be worse than that you ask? The garbage disposal button you see on the right. Our cheap kitchen contractor (you get what you pay for) told the electrician to install a new button instead of the light-switch that would be on the backsplash. Good idea, I thought. Then I came home to that. A F*&%$# lightswitch cut into my sink cabinets!!!! It was supposed to look like a doorbell on top of the caesarstone by the faucet.  This happened 2 days before the shoot of the house and I just threw up my arms and walked away, pretending that it didn’t exist. To fix it we would need to get someone to come out and first move the disposal button to the correct place (that is one dude), then get a piece of wood cut to match the not so perfect rectangle (someone that is very precise), then wood glue the new piece in there, sand it, and paint the whole drawer. That sounds like hours of my coordinating time for 4 inches of an annoyance that I can simply remove in photoshop. 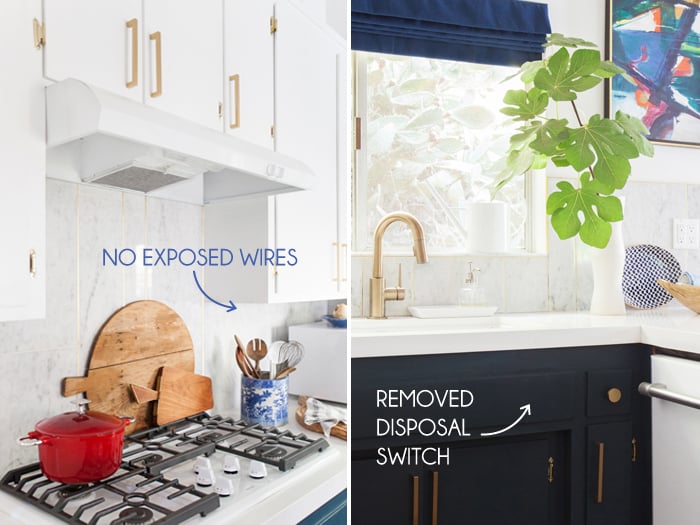 I’m going to fix it. I promise. Oh and yes, it’s perfect toddler height and it’s Charlie’s #1 favorite button to push. He prefers something like a fork to be down the drain for added percussion. It’s wonderful.

Now onto the bathrooms which are being redone soon (working on master bathroom now and guest bathroom in a month or so). My excuse for not doing anything in these rooms is obvious – why spend even a second of time/thought/money on something that would be totally moot as soon as we renovated? I still stand by this, but check out what I actually lived with: 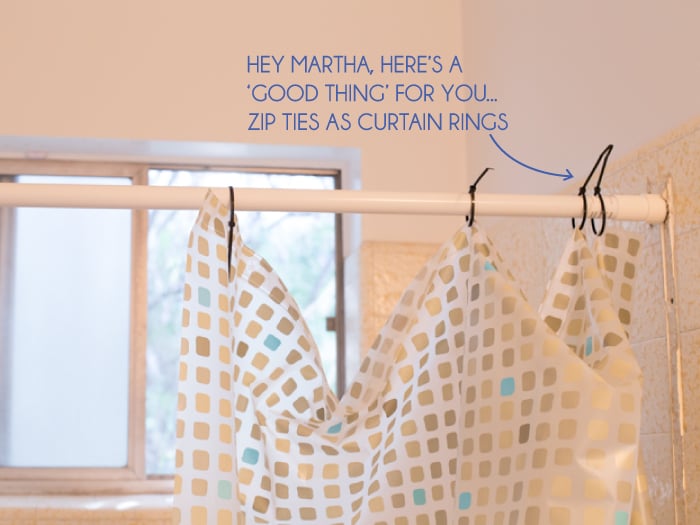 Brian was wonderful enough to take out the big glass and metal sliding door structure so bathing Charlie would be easier, but it left our guests without a water barrier. So while I was at work, he bought this rod and shower curtain for his parents that were staying with us. He didn’t know that you had to buy rings. No problem!!! He thought. I’ll just use black zip ties!! I can’t say I was even bummed when I saw it because the bathroom was such a disaster anyway that it’s not like it made things worse. I think I was glad that he hadn’t wasted money on rings when we have perfectly good zip-ties in our tool box. When people come over it’s almost now even more obvious that I haven’t tried in the bathroom, which isn’t a bad thing. I don’t want people thinking that I have spent even one breath or thought polishing this turd. Also this might be why I don’t allow people whom I don’t fully trust emotionally to come into my house … 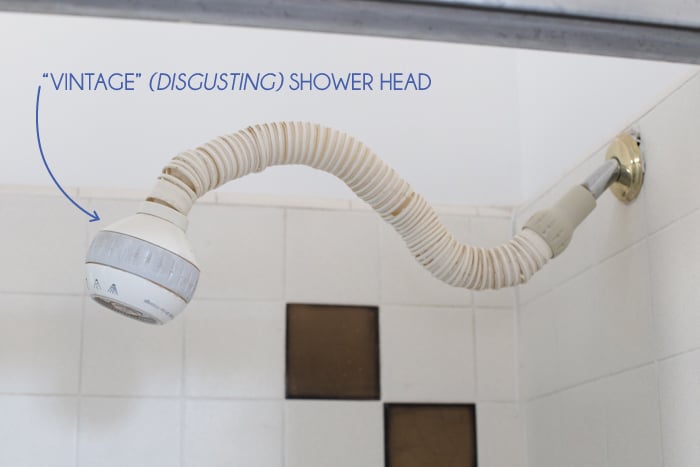 This guy.  Man. I stood under this for a year and a half every day to take a shower. My contractor told me it was grounds for a divorce because shower heads are very easy to change. But making that change takes a few steps on my part – shopping for the right shower head and then getting someone (even Brian) to install it. I could have just bought a $25 temporary shower head but I still didn’t do that. The truth is, while I should have changed it, sure, I knew that I eventually would this year. It didn’t annoy me as much as it would other people.  The masses were horrified, while I was just soaping up my loufa.

Here’s the truth: like every single other aspect of our lives  – we tend to put energy, time, thought, money and care into things we want to, and very little of those things into things we don’t. It’s why when we see some acquaintances or friends we say ‘God, I’ve just been so busy‘ and maybe we legitimately are and we do really want to hang out with them. But the truth is also that ‘I just want to spend time with other people a little bit more’.

My avoidance of these problems is getting awkward in my house. It’s time to just make the coffee date already. Because while sometimes it seems like it’s going to be so painful, once it’s done you are always glad that you did it.

So what are you living with? What annoying thing do you see every day and walk right by them?

18 Comments
Oldest
Newest Most Voted
Inline Feedbacks
View all comments
Our sites use cookies to improve your experience. Learn more